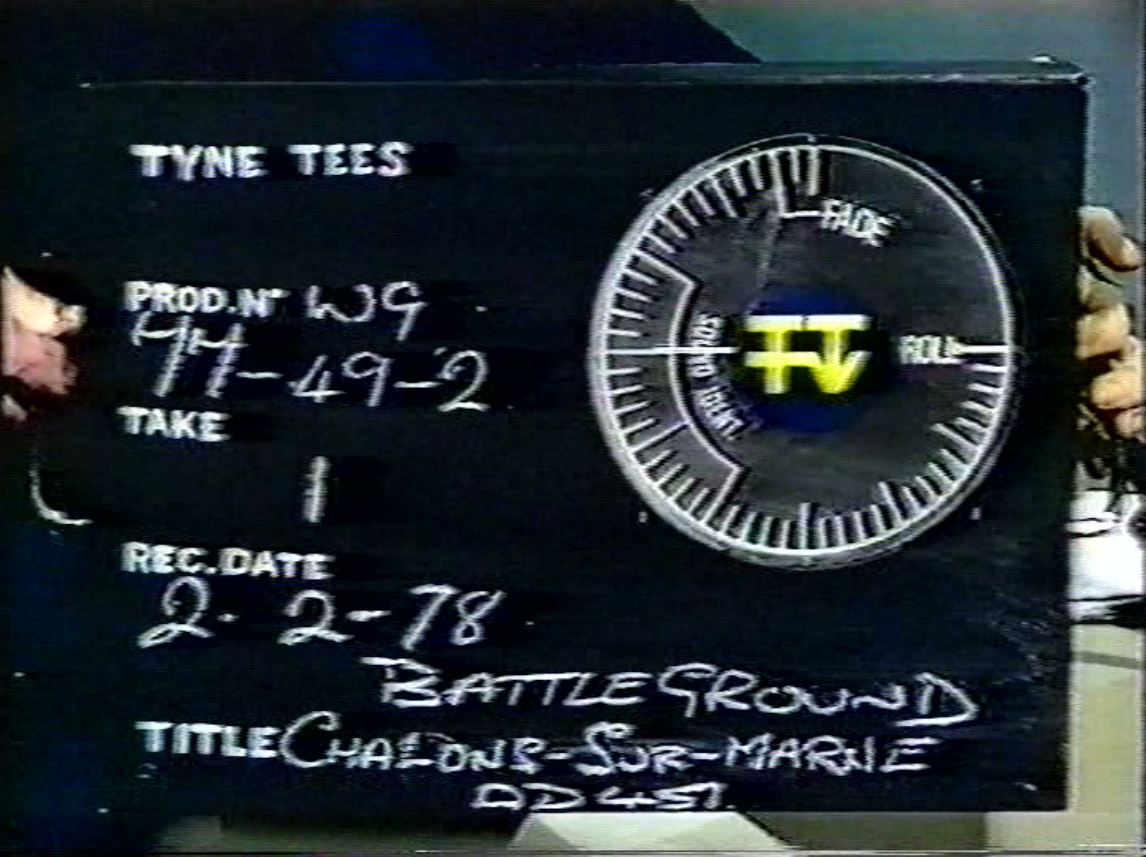 The programme counts down: 'at the third stroke...' 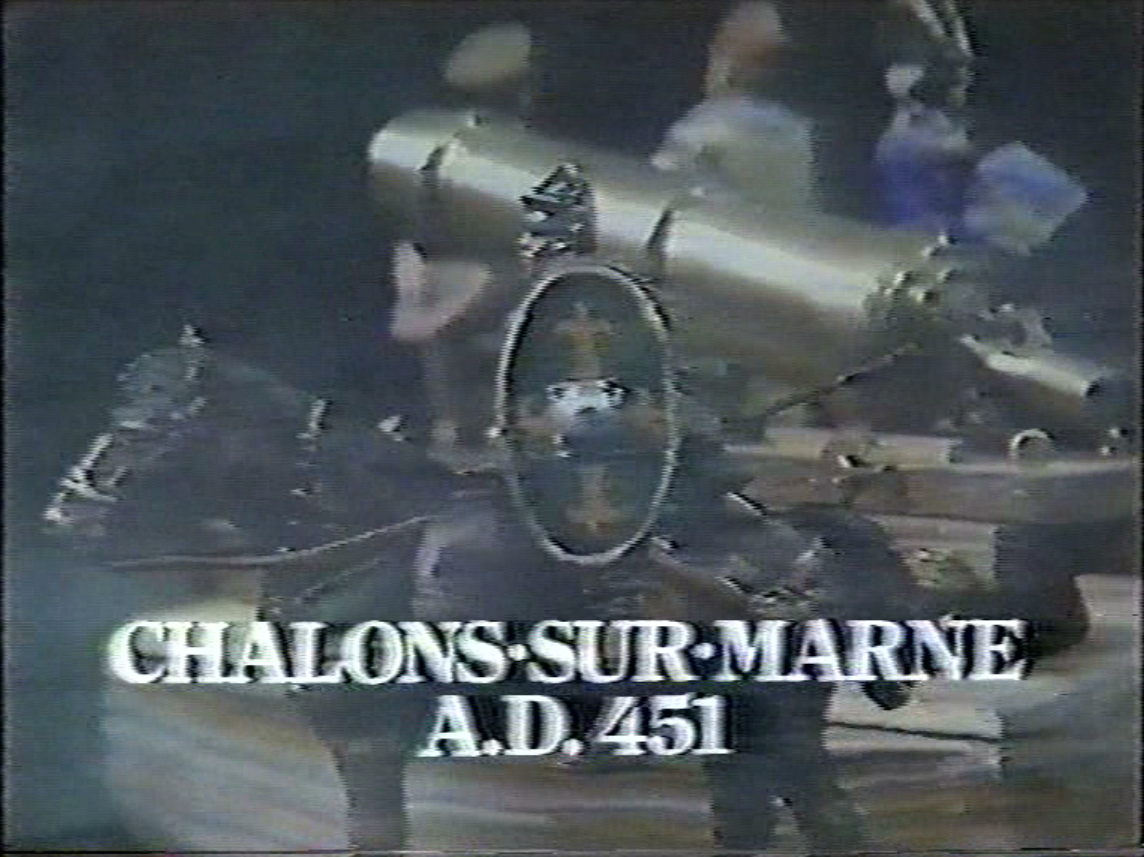 The titles, in which a plinth of models rotates to the music, are timed such that they coincide nicely with a Roman cavalryman 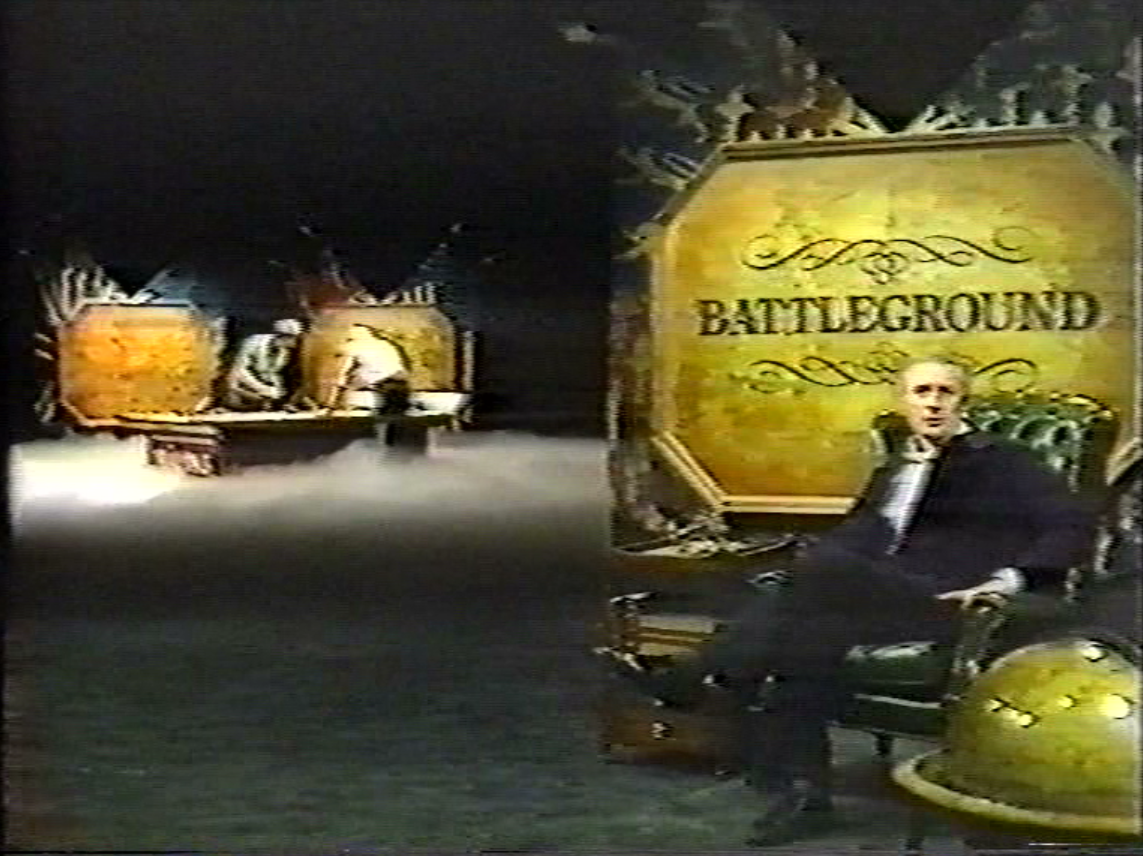 The studio was pretty big. Woody's narrator-zone is foregrounded, as the players prepare for the forthcoming conflict in the background.

This episode begins with presenter Edward Woodward explaining to the viewer a little about the period in which the battle about to be fought was waged, and relating this to its wargaming incarnation:
'The ancient period, when the bow and arrow and the spear ruled supreme, spans 2000 years... It was a colourful time in every sense. And it's certainly one of the most popular wargaming periods.' 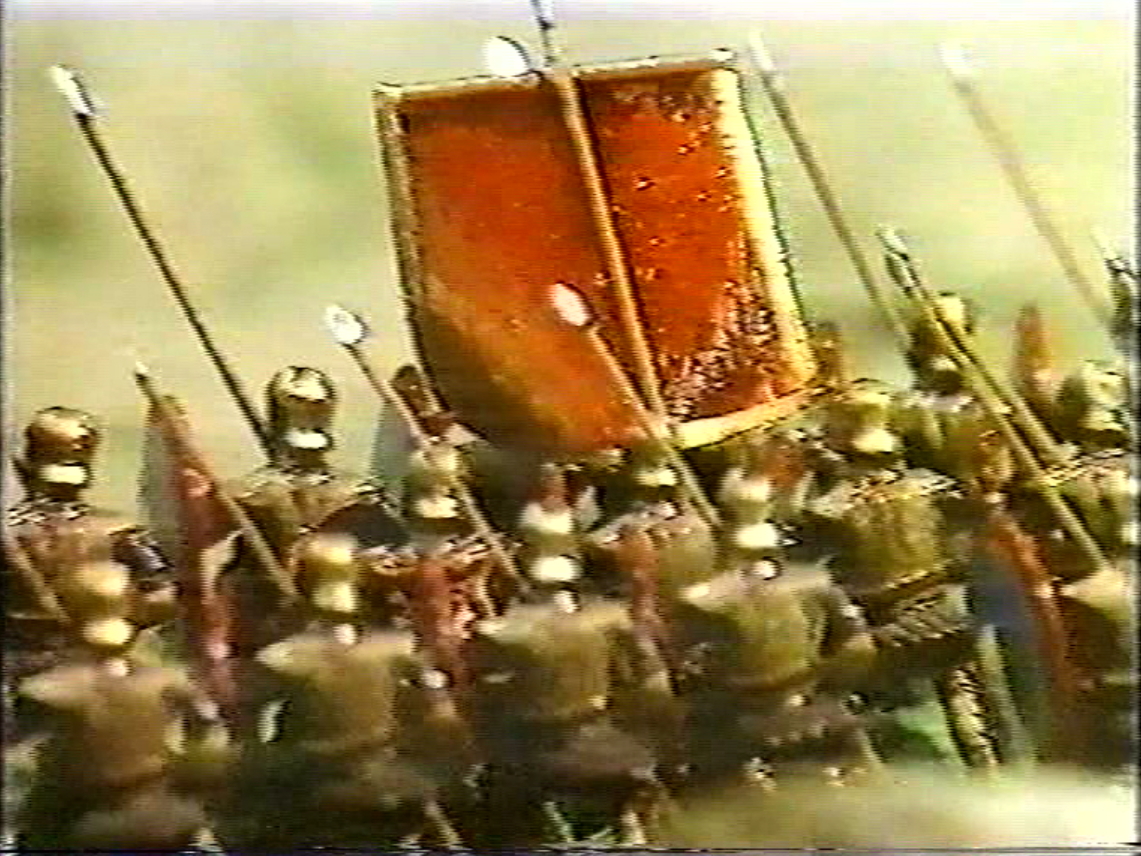 You can immediately see one of the attractions of ancients, the colourful garb of the combatants.

The episode is entitled Châlons-sur-Marne, and covers a battle in what is now part of the Champagne region, in France, between Huns and a Romano-Gothic force. Following the colour scheme of the series, the Huns are blue, and the Romans red. 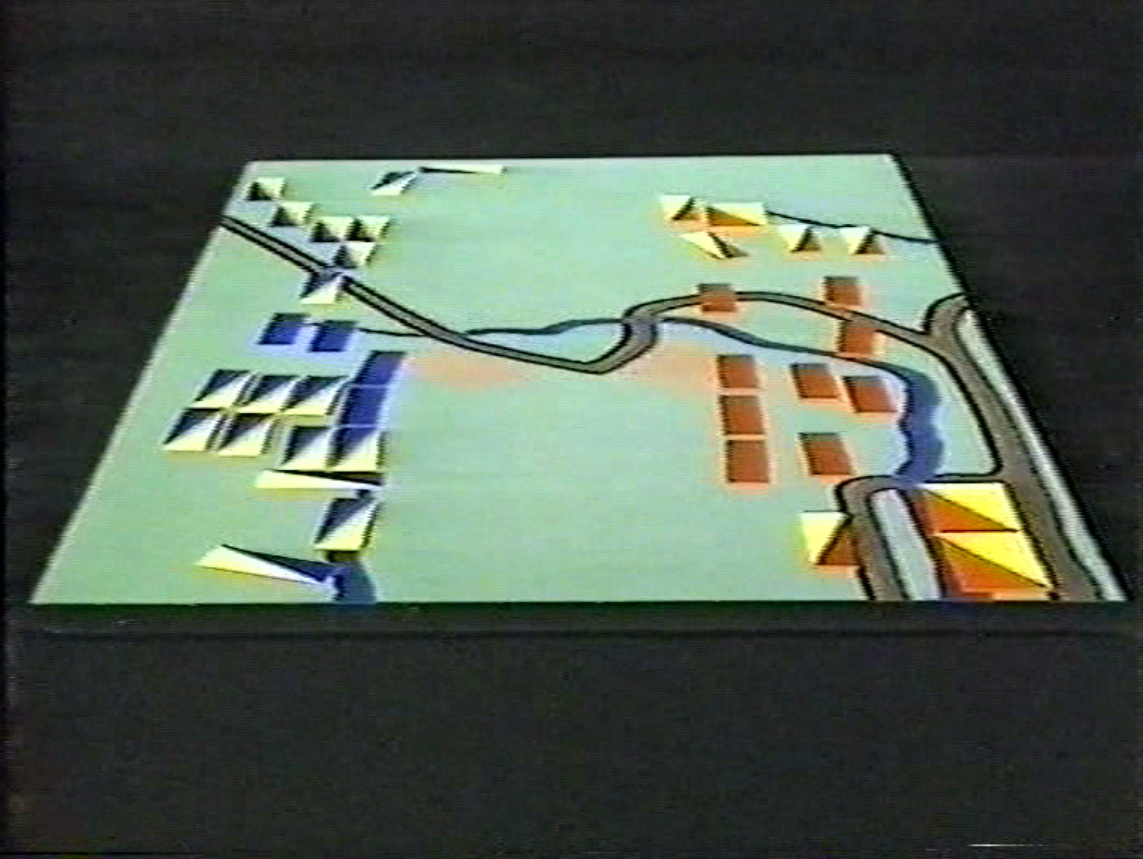 EW: 'So, what have we got?' Well, according to Ed and Attila, a weak Roman centre, amongst other things.

The Roman elite foot troops are positioned in the centre, with two cavalry wings some of which are Roman, but more of which are Germanic allies. The Huns deploy in a similar manner, only they're 90% cavalry! The Romans regulars are, as Woodward observes, more disciplined, but their army is overall less mobile, &, acc. to Woodward's opening summary, weaker in the centre. 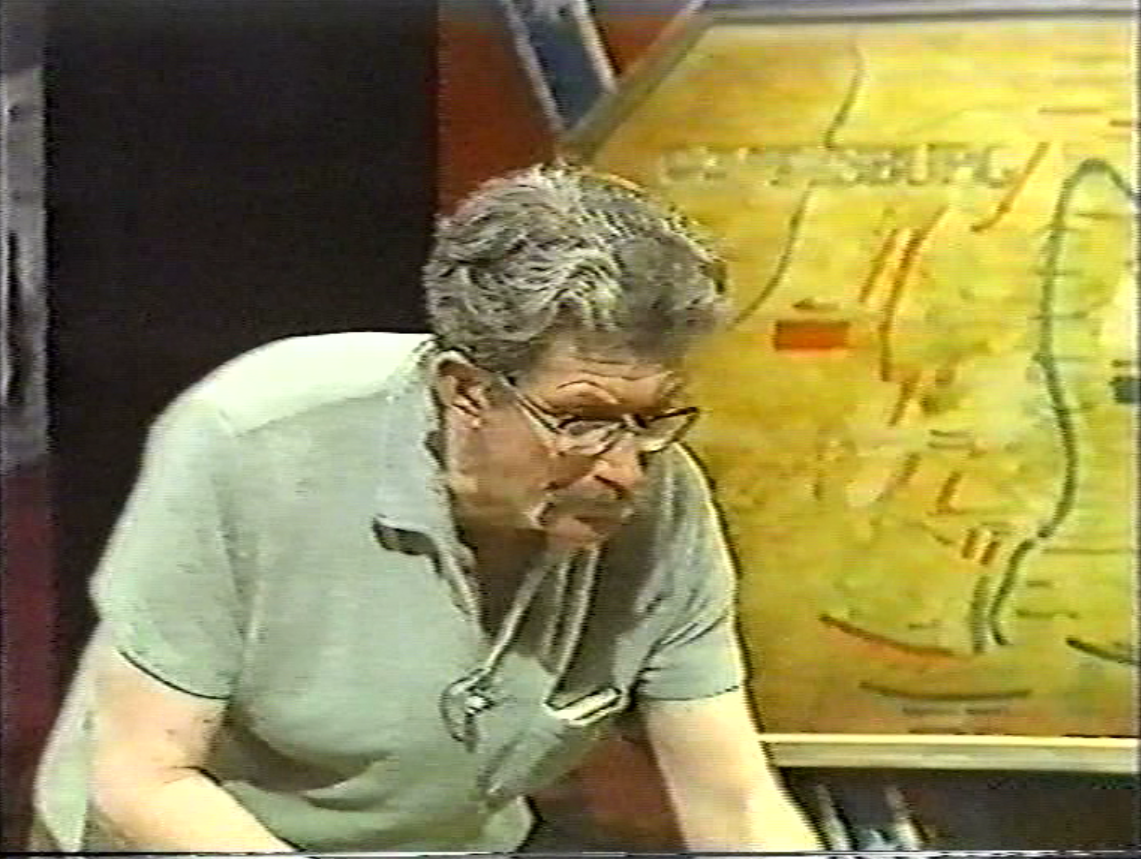 Bob O'Brien, with stooped back and furrowed brow. 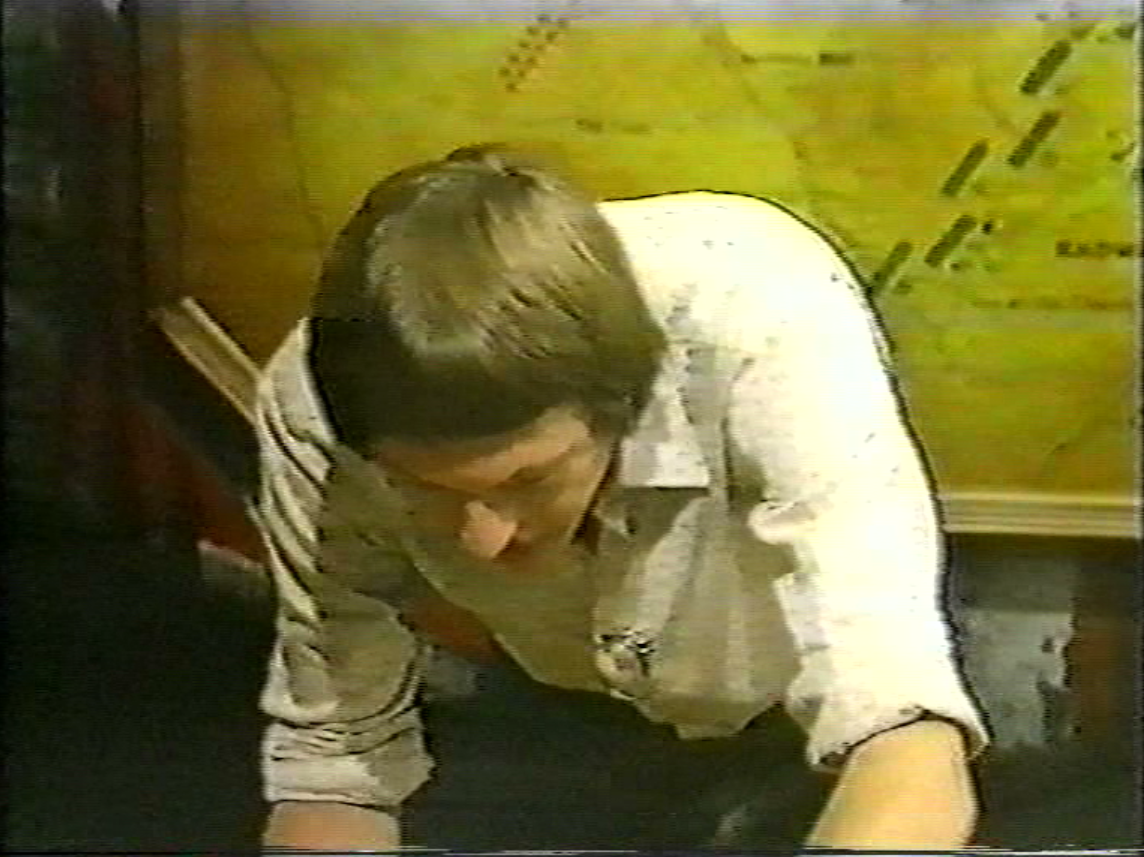 Steve Davidson, even more stooped: body language that says, 'I'm not use to being filmed!'

Edward Woodward introduces the combat thus: 'It's not a very well known battle, but the name Attila the Hun should ring a few bells... The Roman Empire was stretched... and had to look to its allies when trouble arose. Attila the Hun was just such trouble.'
The Roman leader, or Magister Militum, was Flavius Aetius, 'last of the Romans' (so he'd be one of the guys, I assume, that Gibbons would write about, in his famous epic historical work, 'The Decline & Fall of the Roman Empire'), working with the Visigoth king Theodoric, against a coalition of Hunnic tribes under Attila's leadership.
Rather confusingly, the battle of AD 451 is now usually known as the Battle of the Catalaunian Plains, and the phrase 'Battle of Châlons' may lead you to another battle, in a similar location, of 274 AD, in which Aurelian re-absorbed Gaul into the Roman Empire. 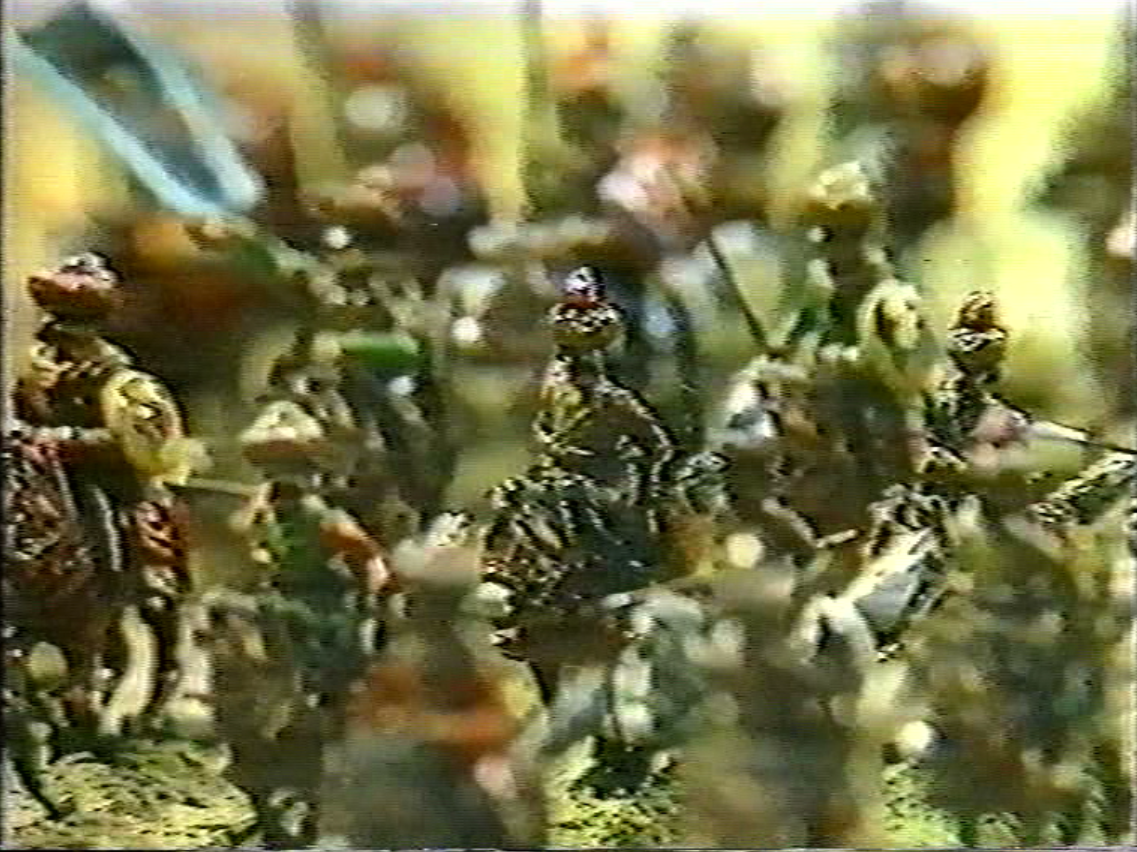 The battle itself might well have been chosen because it has been seen by some as a key macro-historical event, a turning back of the Hun tide, rather as the battles of Tours in the West and Vienna in the East have often been seen as key events in keeping Europe Christian, by stemming similar Islamic incursions .
All of these views have been contested, with some holding that these battle were not as fundamental to the eventual outcomes as tradition would have us believe. I find this all fascinating, but as these conflicts all fall outside my main periods of interest, wargames-wise, I will leave these debates to the more passionately partisan! 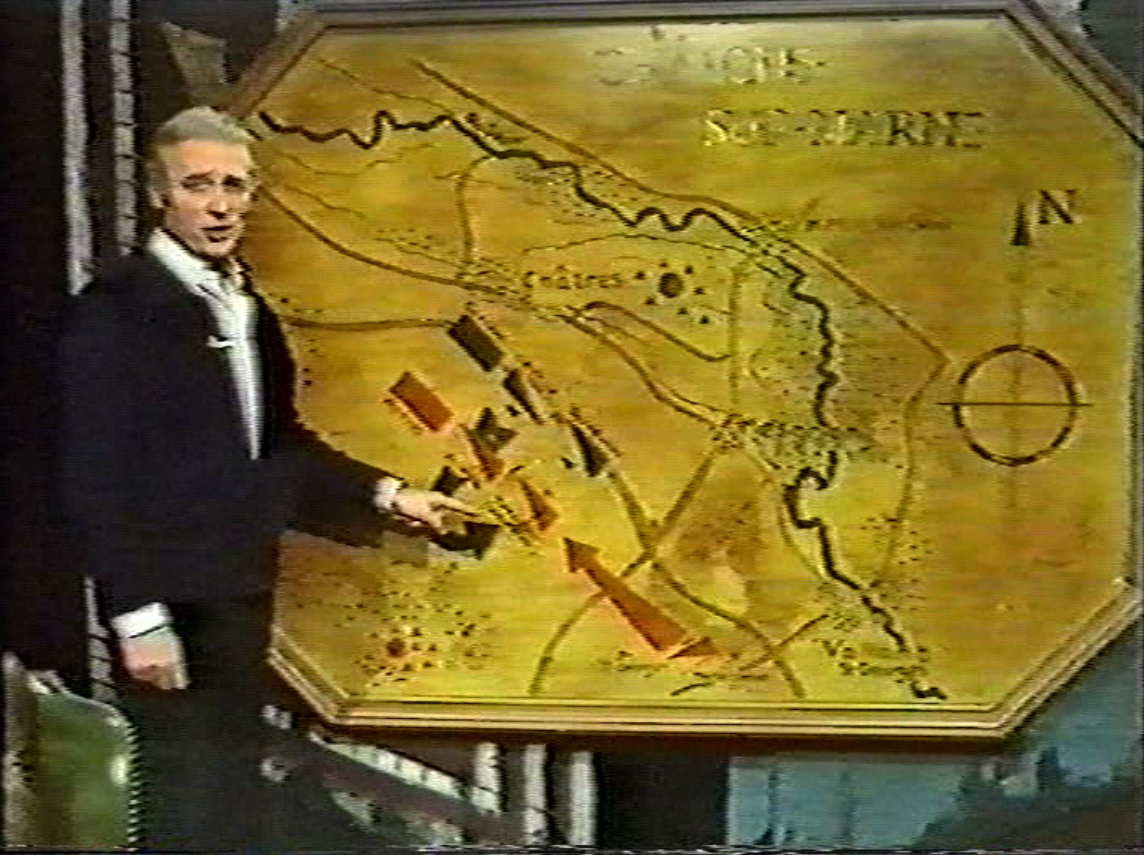 Woodward expatiating on dispositions... and clearly loving it!

Woodward doesn't get into the background that deeply, instead telling a story in broad brush strokes, and (I would hazard to guess) along fairly 'old school' lines. Whatever the truth may be, he clearly delights in narrating the strategic historical background, and describing the tactical deployments of the battlefield, which is hugely endearing. 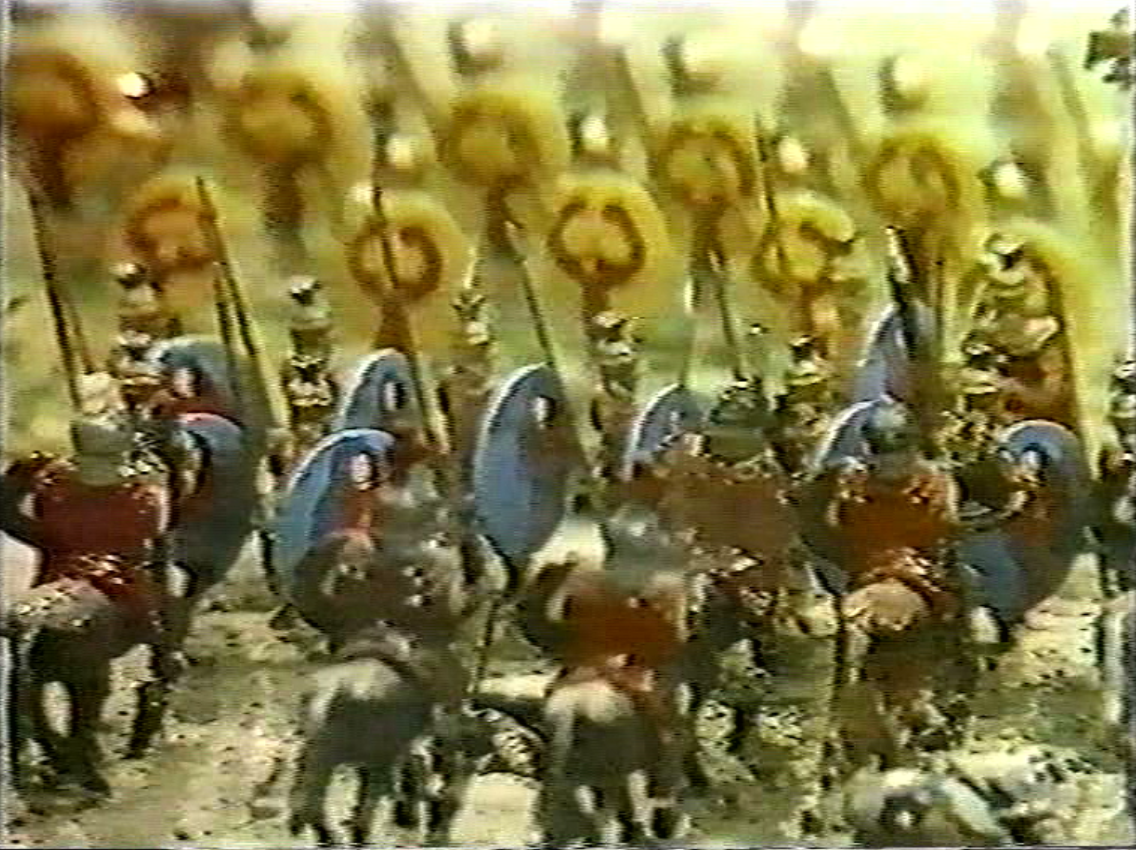 Roman shields, another attractive aspect of the martial splendour of this era.

As a young Asterix fan (many moons ago!), and then a little later prize-winner in Ancient History at my Sixth-Form College, I'm surprised, looking back, that I never felt more attracted to wargaming Ancients. I do recall drawing sheets of Roman shield designs, under the influence of Goscinny & Uderzo, and later on getting a book about the era of Alexander the Great from the local library. My memory suggests this book was part history and part wargaming stuff: anyone have any ideas what it might've been?
I also recall, under the influence of this book, whittling a Macedonian 'phalangist' (or was it a 'hypaspist'?) out of Milliput! But that's as far I ever went with Ancients. I think my conception of the very basic linear deployments of much warfare pre-1750 put me off! I always felt it was basically nowt more'n two lines facing each other, and therefore not too interesting!
The players in this episode are Bob O'Brien ('who works for the local authority in Worthing'), fighting as the Huns under Theoderic, against Steve Davidson ('an air traffic controller, also from Worthing'), as Aetius and his Visigothic allies. Bob is a big bear-like man, with a basso voce presence, whilst Steve brings to mind the similarly named skinny snooker player Steve Davis, and has a similarly quiet monotone. I imagine the youth of today would switch off instantly, loudly moaning 'BORING!' Perhaps I'm showing my age here, but I really rather like the 'Quiet FM' vibe. Gently reserved behaviour is, I think, vastly underrated in our noisy hyper-media age! 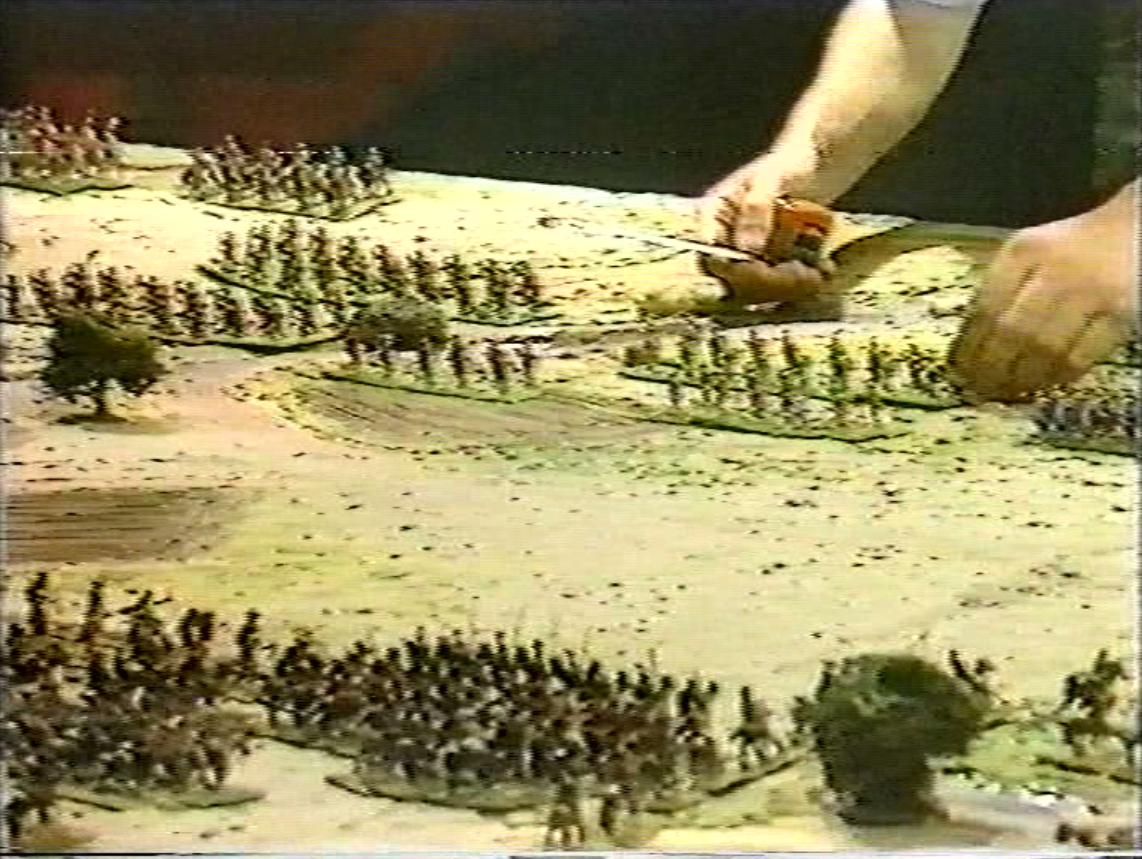 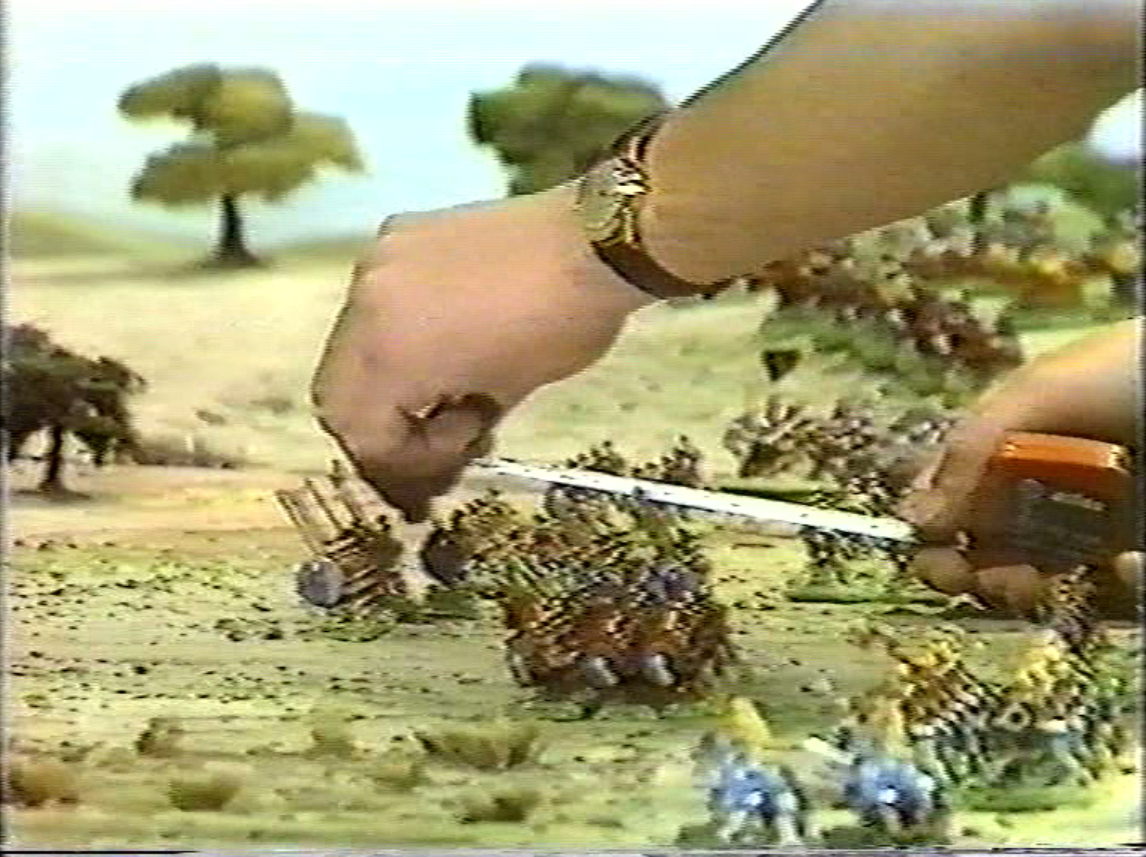 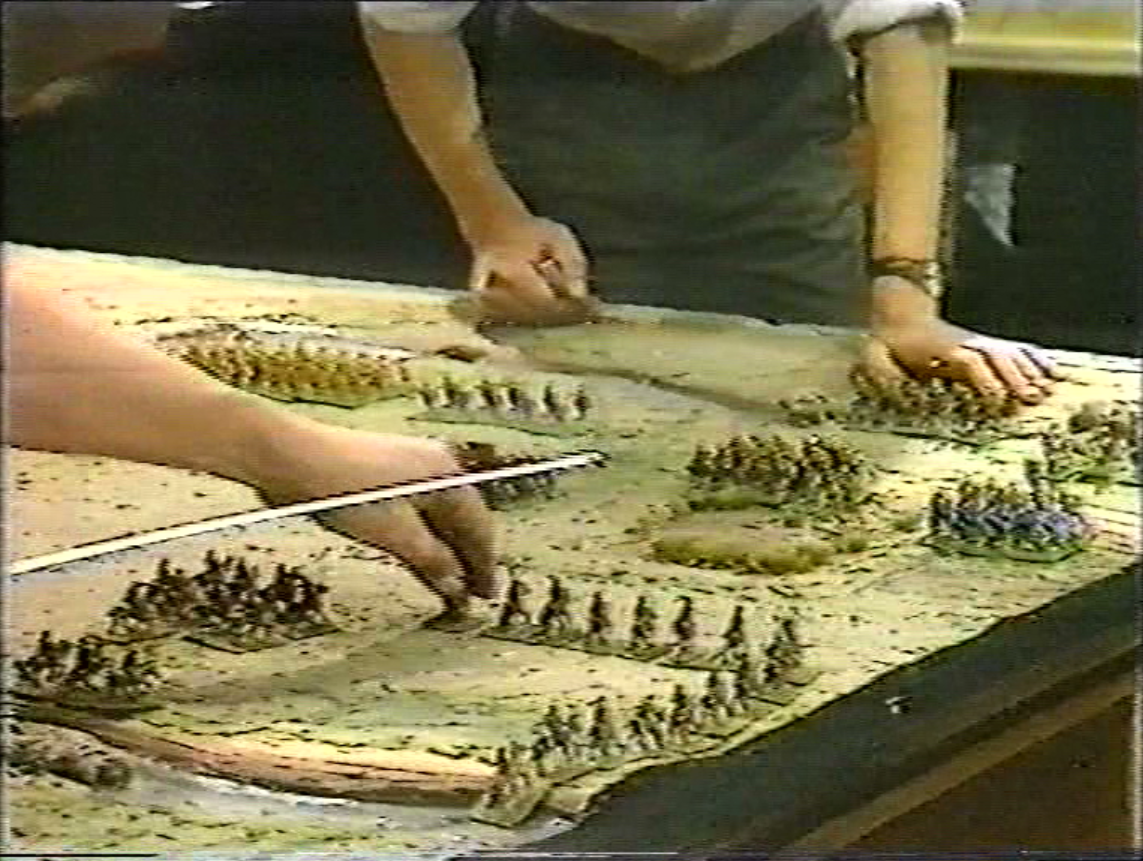 EW: 'Bob and Steve wargame together quite a lot… I don't think Steve is going to be fooled by all this manoeuvring.' 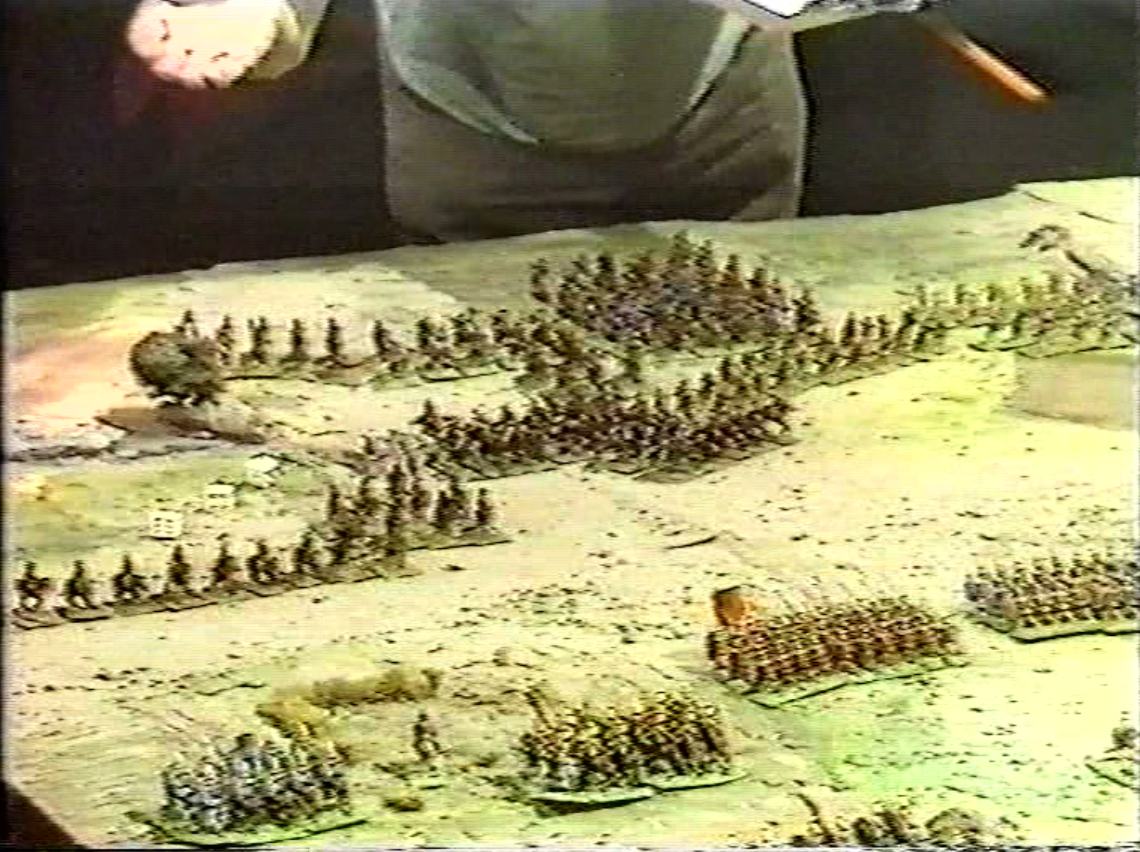 At this stage of the game Bob's dice rolling looks more threatening to his Huns than the Romans. 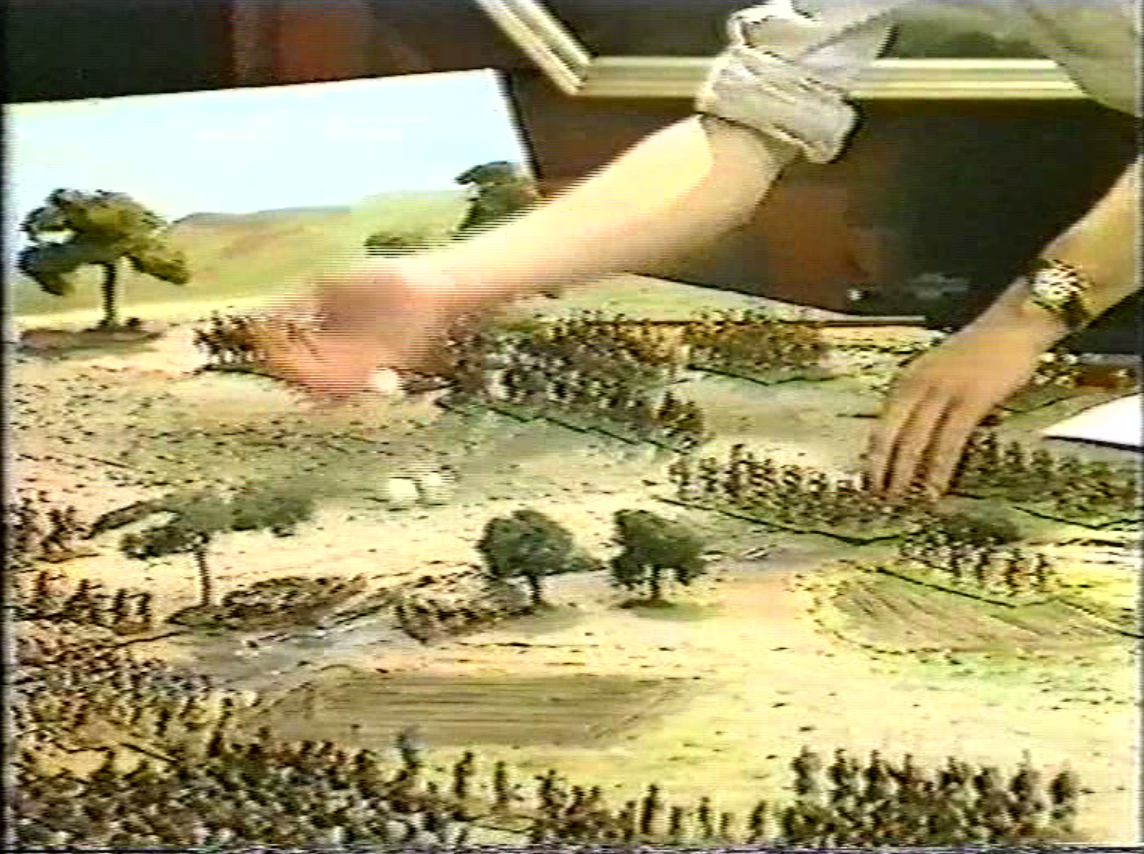 The more cautious and quietly-spoken Steve opts to do his 'reaction test' dice-bombing in the open centre of the field.

'Any other charges to declare?' Bob placidly announces, rather than asks, a bit like a customs inspector who knows you're a drug mule. Attempting to do what Gilder did so successfully in the Waterloo episode, Bob O'Brien flies in the face of historical precedent, by going for the jugular.

Woodward gleefully notes 'That's shaken Steve... Bob's turning his Goths straight into the cream of his Roman infantry.' Some of O'Brien's cavalry then go in for a spot of the 'Cantabrian Circle' dance, a manoeuvre which Woodward explains (I won't! If you don't know what it is - and I didn't - you can look it up here), concluding 'That's pretty sophisticated stuff for alleged barbarians'. 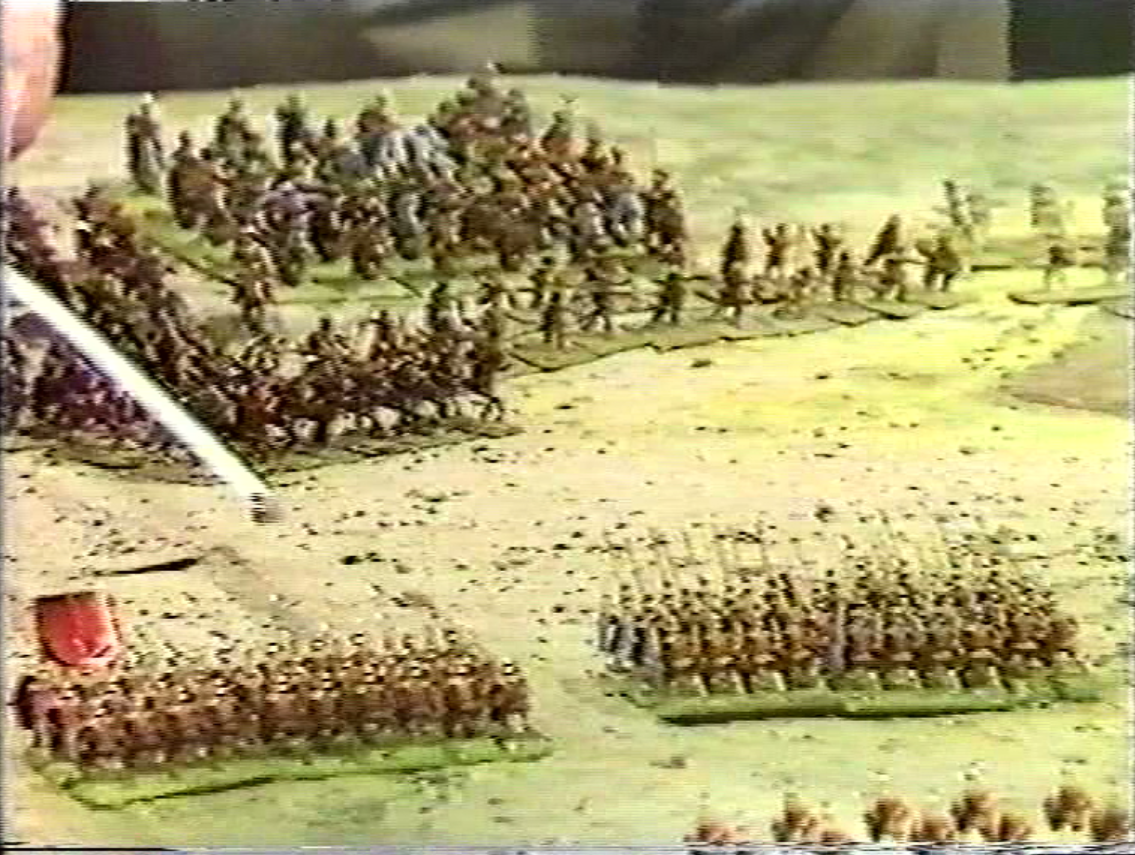 Watching the players doing the maths on their archery or melées is an odd sight on TV! After what appears on screen as about 10 or 15 mins of play - which, as the Battle article on the series notes, will have taken many hours, perhaps even days, to film - there's the standard eye-candy interlude of battlefield footage, with music and sound effects, before the game resumes. This is a formula repeated across all six episodes. In these interludes camera movement, including zooms and focal changes, etc., provide the motion. 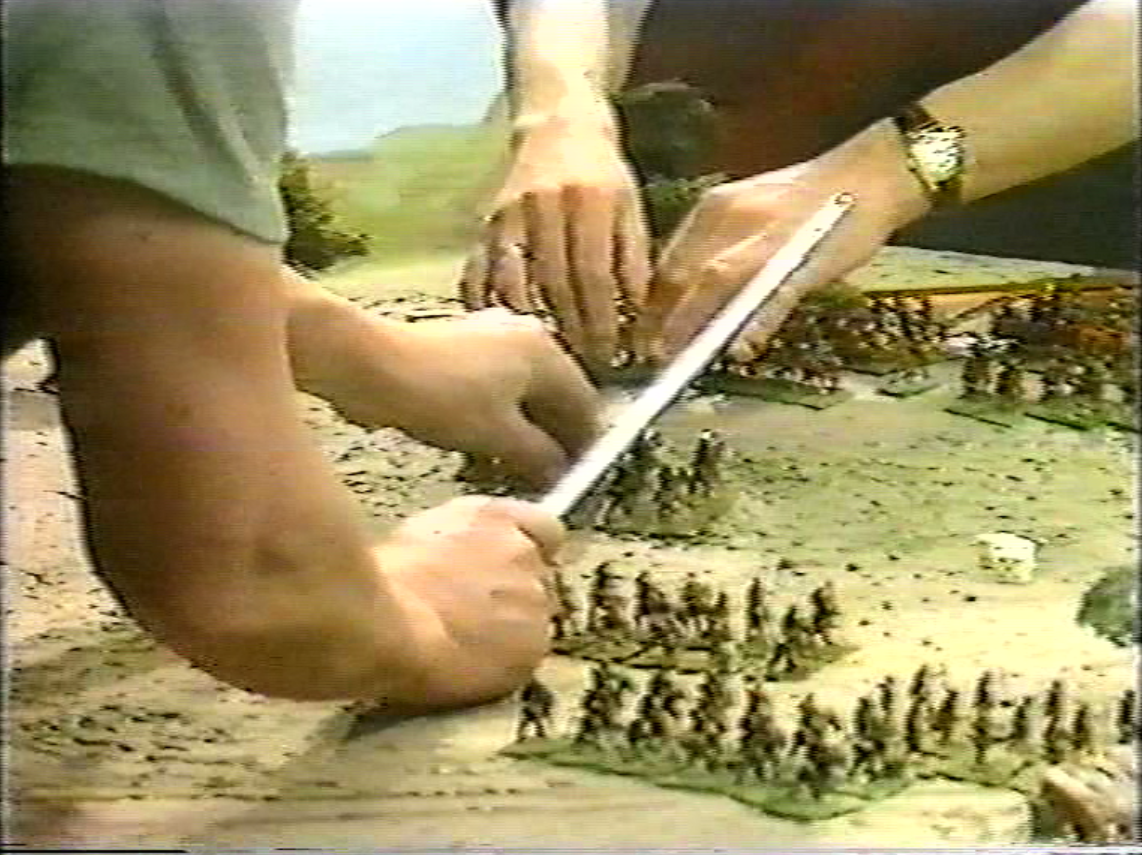 Arms and the man, or rather, many arms and many men. 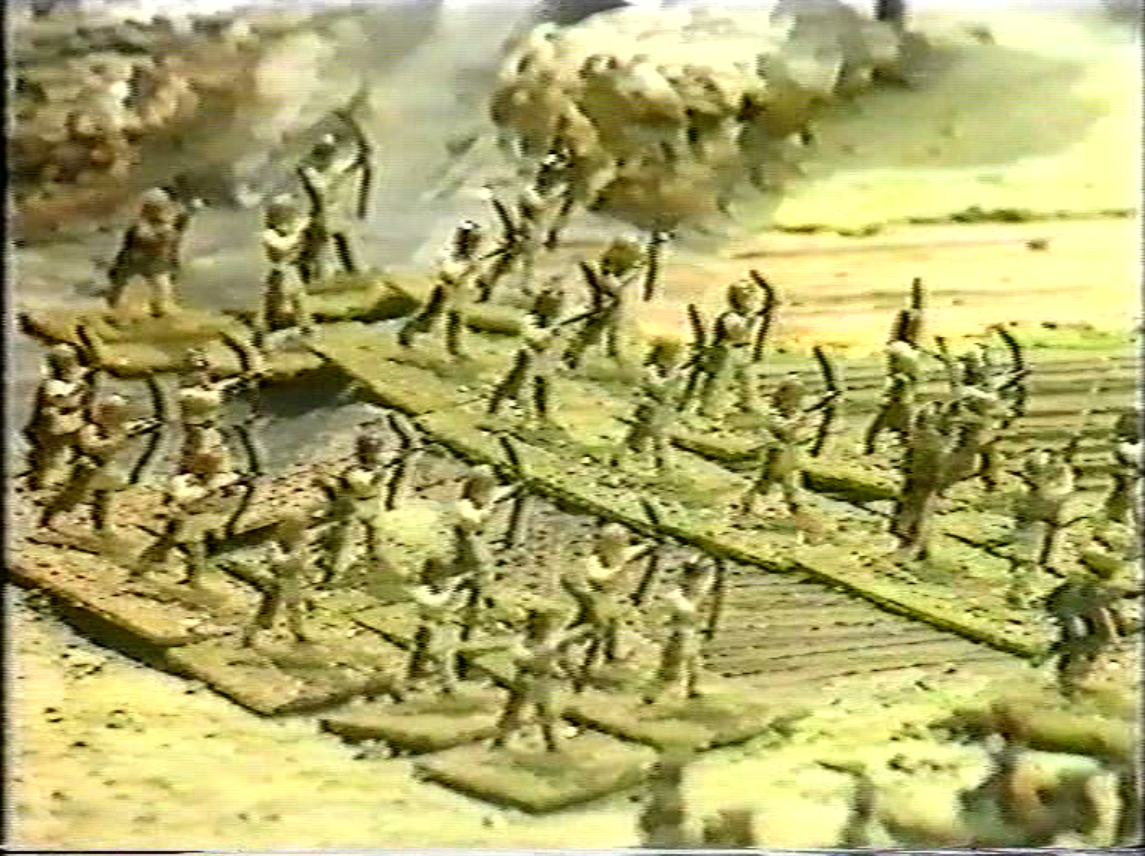 I think certain facets of the game - of which the dice throwing and rule consulting form a part - come up against something rather troublesome for TV wargaming, namely the gap between how figure-collectors' and wargamers' imaginations are worked upon by the combination of dice, rules, static figures and terrain, and the bald facts of what is actually there before the eyes. Not something easy to capture on film! Still, the terrain and figures - which I believe are more from the Gilder collections - are fabulous, if undoubtedly also, as one blogger puts it, 'unfashionably shiny'. 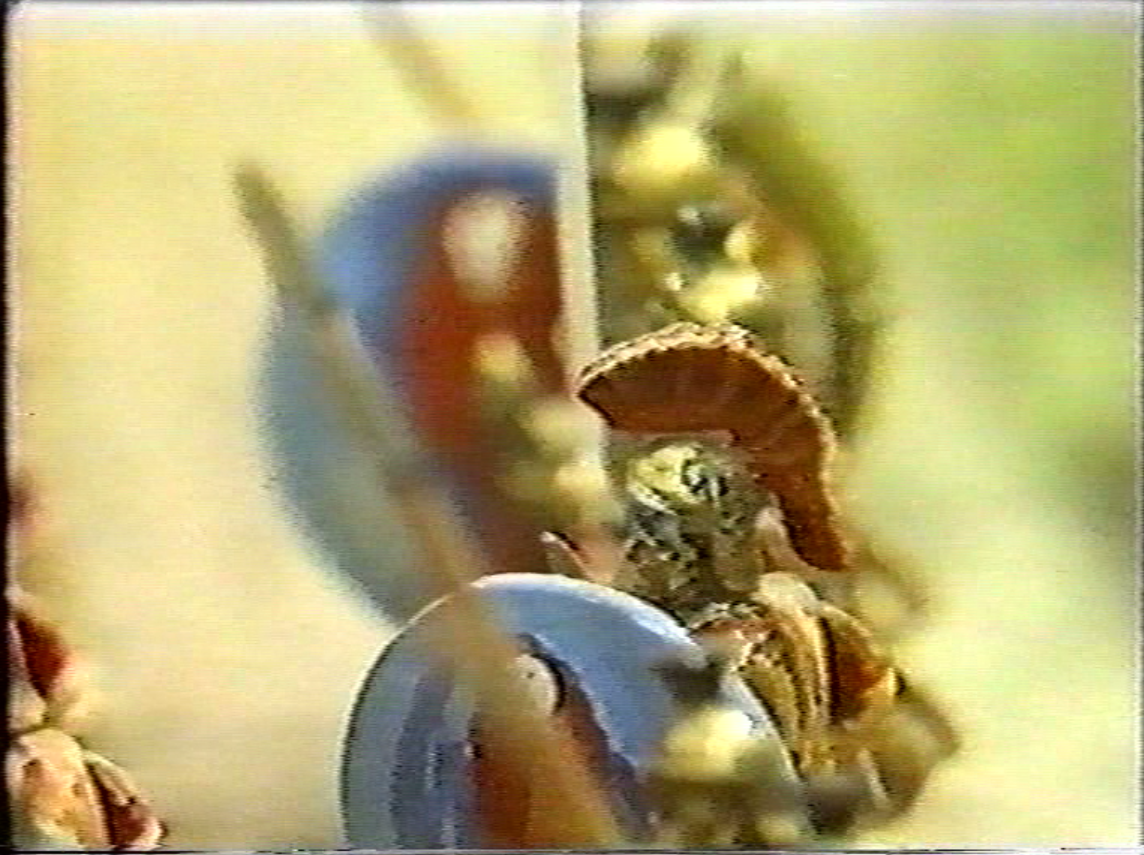 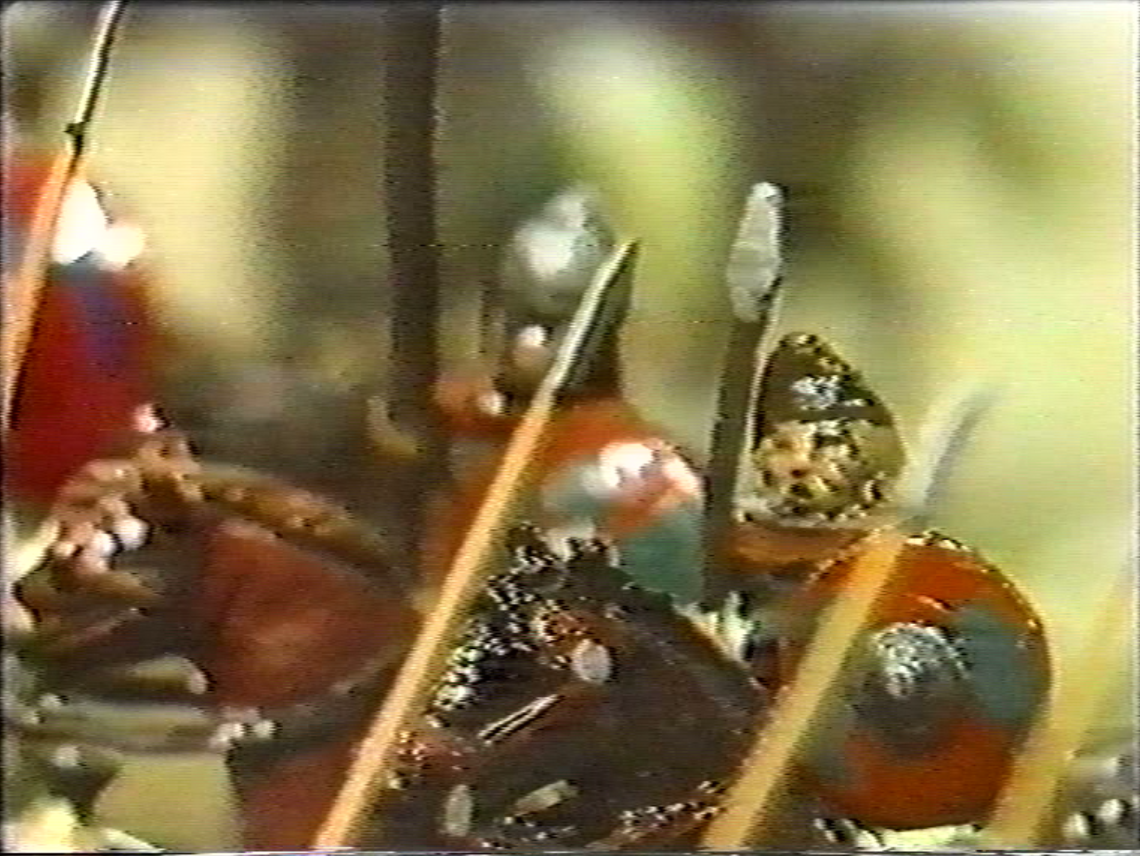 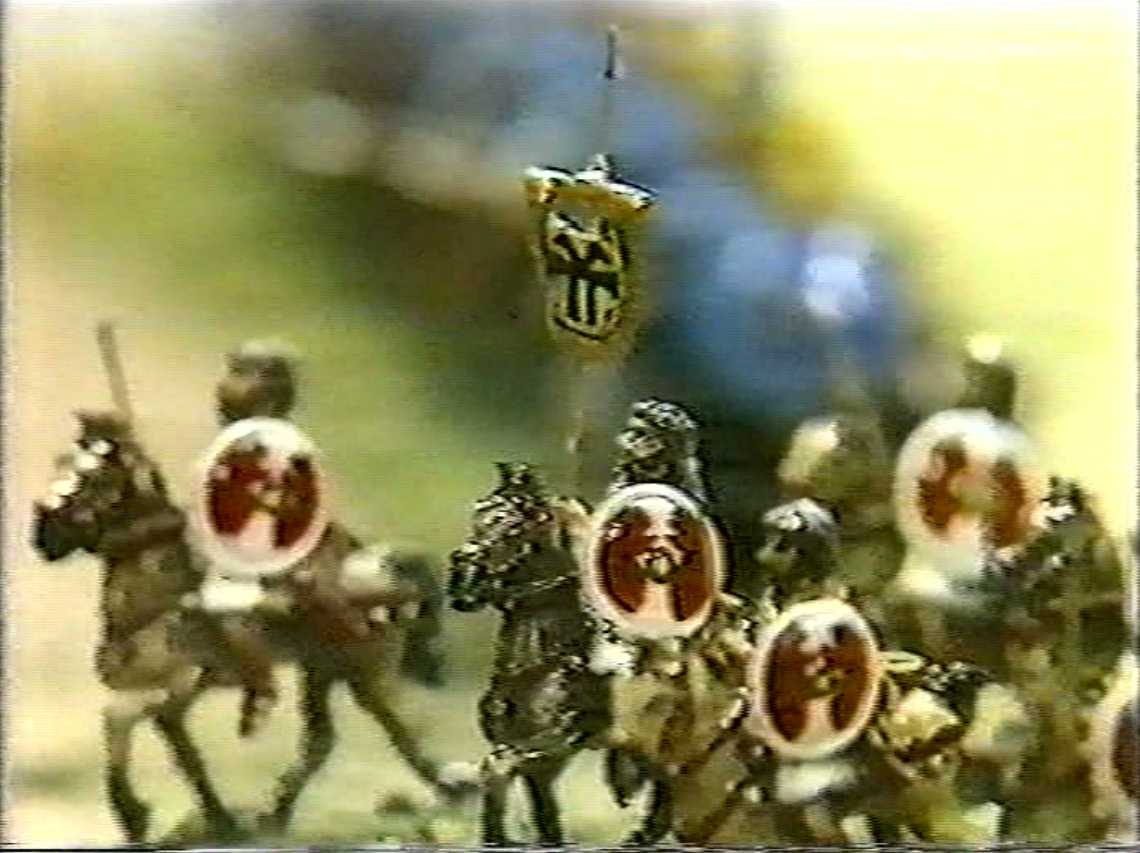 I must confess, I don't know which team these guys were on! The matching shields suggests the Roman side, but the scruffy hair and beards... hmm? Goth allies of Rome, perhaps?

After the filmic interlude, we return to the map, to check on the battles progress, with Woodward noting that, after melées, morale must be tested, and that 'It is morale that wins battles'. Then the players approach the table for part two. 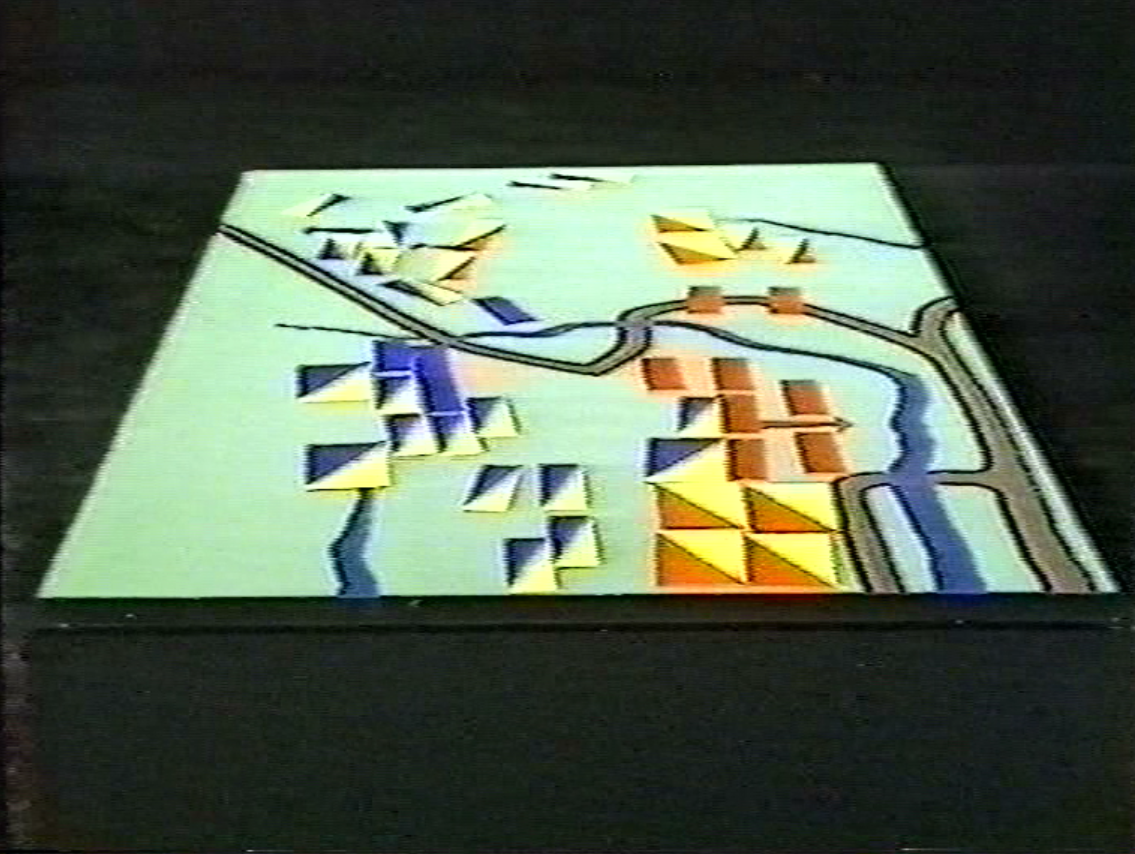 EW: 'After the melée, every unit that saw a rout had to check morale. It is morale that wins battle, and this is how we stand…'

Wargaming is a peculiar hobby in some respects, one of the most significant of which - to my mind - results from the strange balance of fanaticism over certain forms of accuracy, with regards to particular details (Who was there? What were they dressed like?), combined with the hugely unrealistic eye-in-sky vantage point players enjoy, allied to the element of direct interaction between player-personalities, commanders who in truth would usually be physically - if not psychologically - very much out of each others reach. 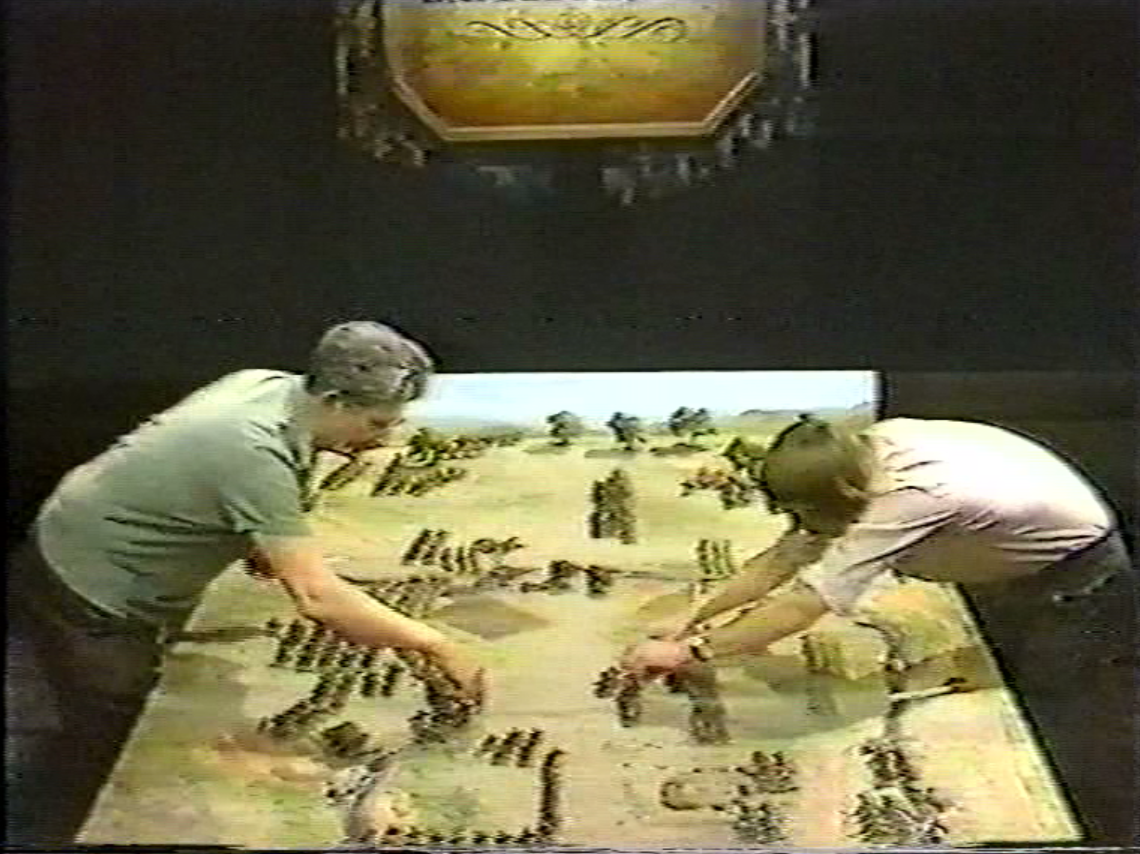 Talking about being out of reach!

BO'B: 'Can you move them the rest of the way Stephen?'
SD: 'Certainly Bob… I'll save your back!'

Steve obligingly helps Bob press his attack home! How many real opposing generals would do that for each other? Wargamers… a better class of enemy! 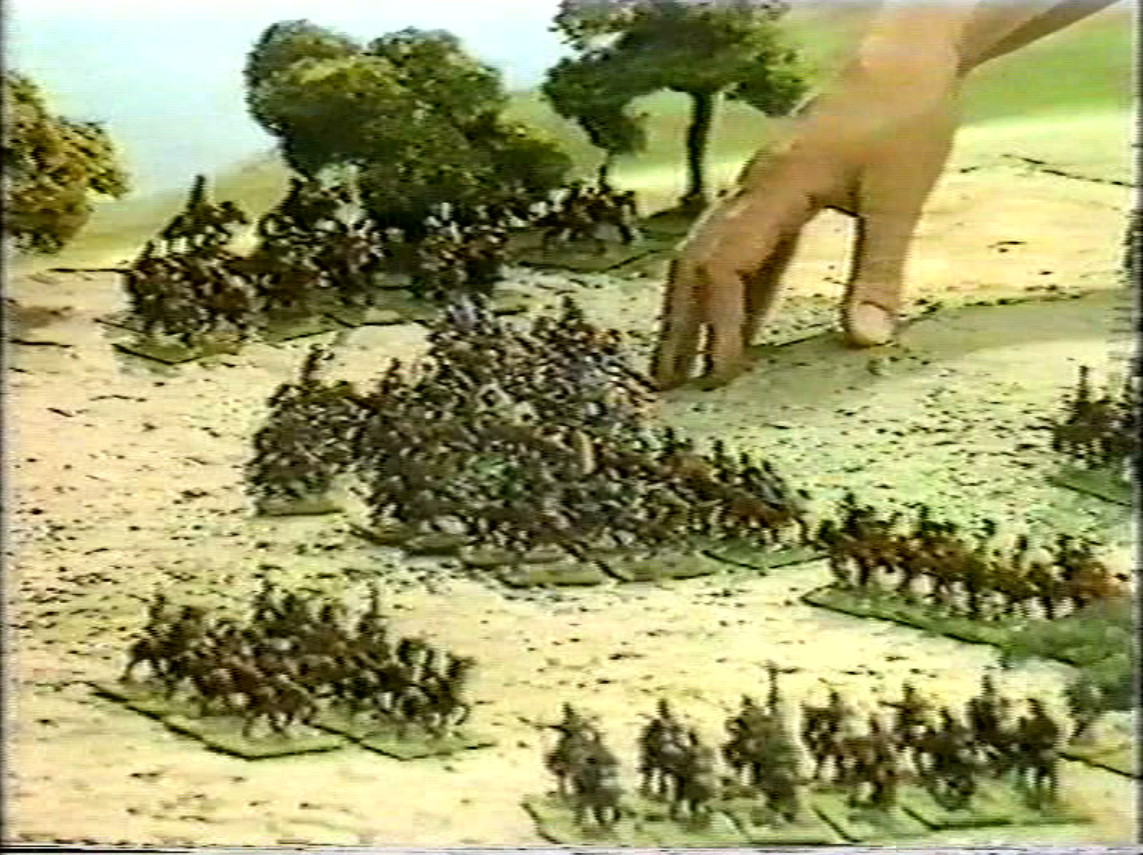 EW: 'That left cavalry flank is turning into a dogfight… it's looking rather like a traffic jam!' 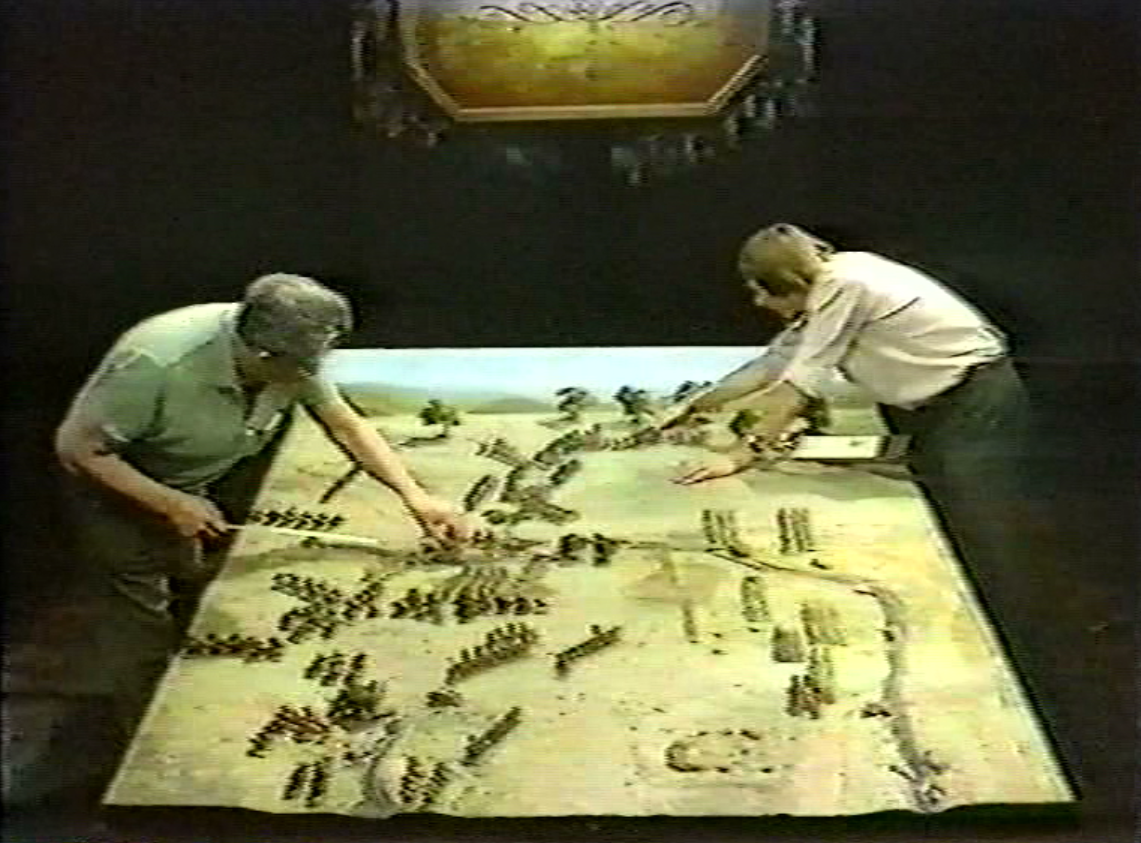 From the looks of the table the Romans and their allies appear to have the upper hand!

This ancients battle seems rather ragged, a back and forth mess of melées and routs! But in the end orderly caution overwhelms ragged barbarian improvisation.

SD: 'Back to Asia they go!'
EW: 'Steve's really rolling things up, and sending the Hun off in all directions.' The face of defeat. BO'B: 'I'm afraid I was probably unusually slow… reacting there in the middle'.

Still, hearing Woodward give his closing synopsis, his description sounds, for all the elements of artificiality inherent in the gaming procedure, very much like a truly historical account. Factors such as a generals luck on the day - or perhaps we should say on the die, as it is the dice that usually determine luck or chance in wargaming [1] - or the indecision of a commander, becoming crucial factors on which victory or defeat may hinge. In this instance Bob O'Brien's initial bold deviation from expected manoeuvring is followed by poor luck and vacillation, whereas Steve Davidson's consistently  conservative caution ultimately pays off. 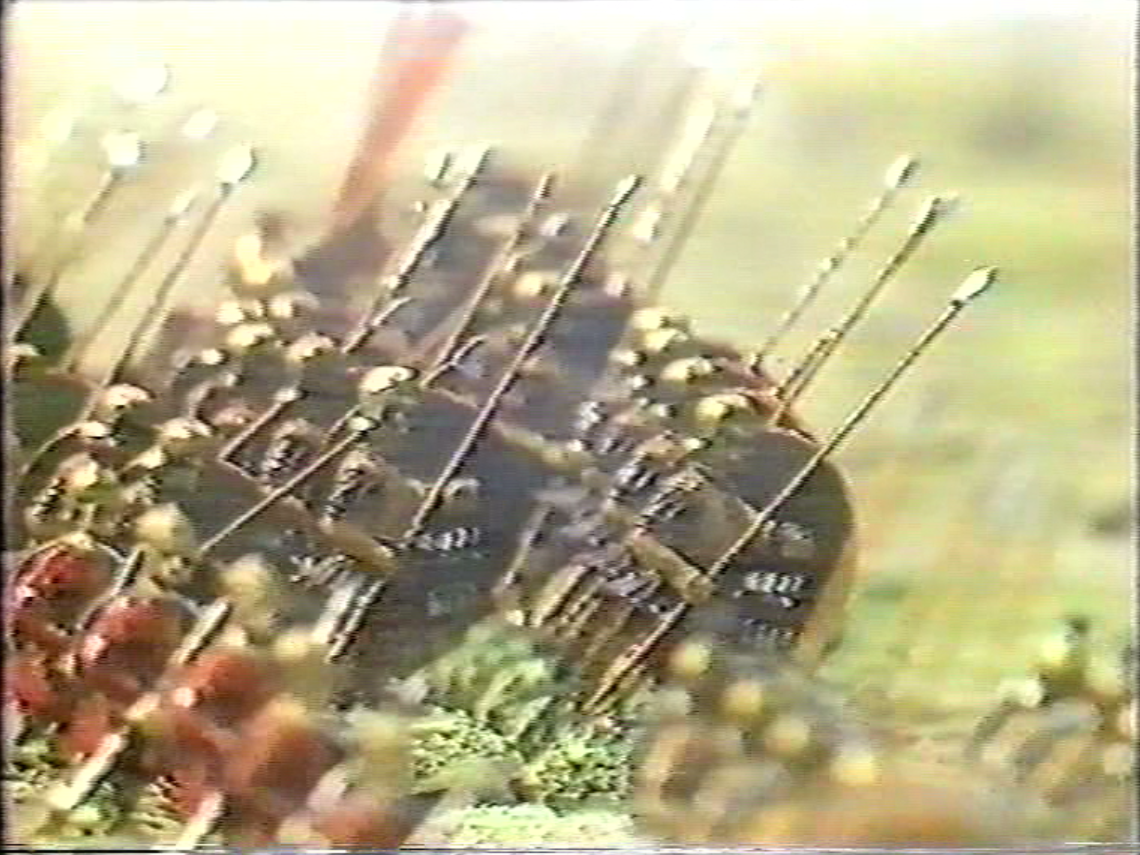 Those once all-concquering Roman legions are invincible once more.

The Châlons episode finishes with Woodward saying 'I hope you'll be with us next week, somewhere in France in 1944.' The ability to project oneself imaginatively into an era, which this closing statement assumes is taken for granted, is also the same magic ingredient that bridges the gap, sometimes made more glaringly obvious under the studio lights, whereby static figures and terrain can animate the imagination. 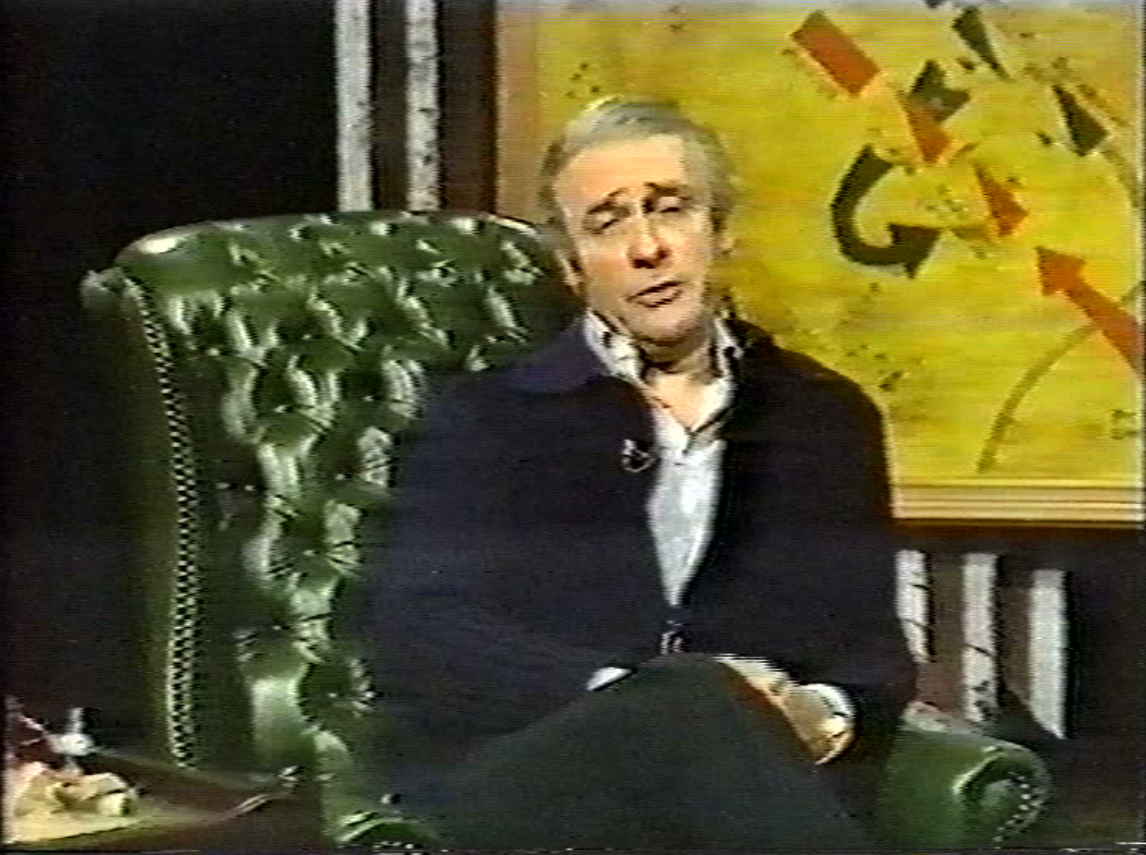 Ed in his armchair.

Sadly the France 1944 episode, notable for being the only wargame scenario in the series not based on an historical engagement, is one of the two that may have been irretrievably lost. 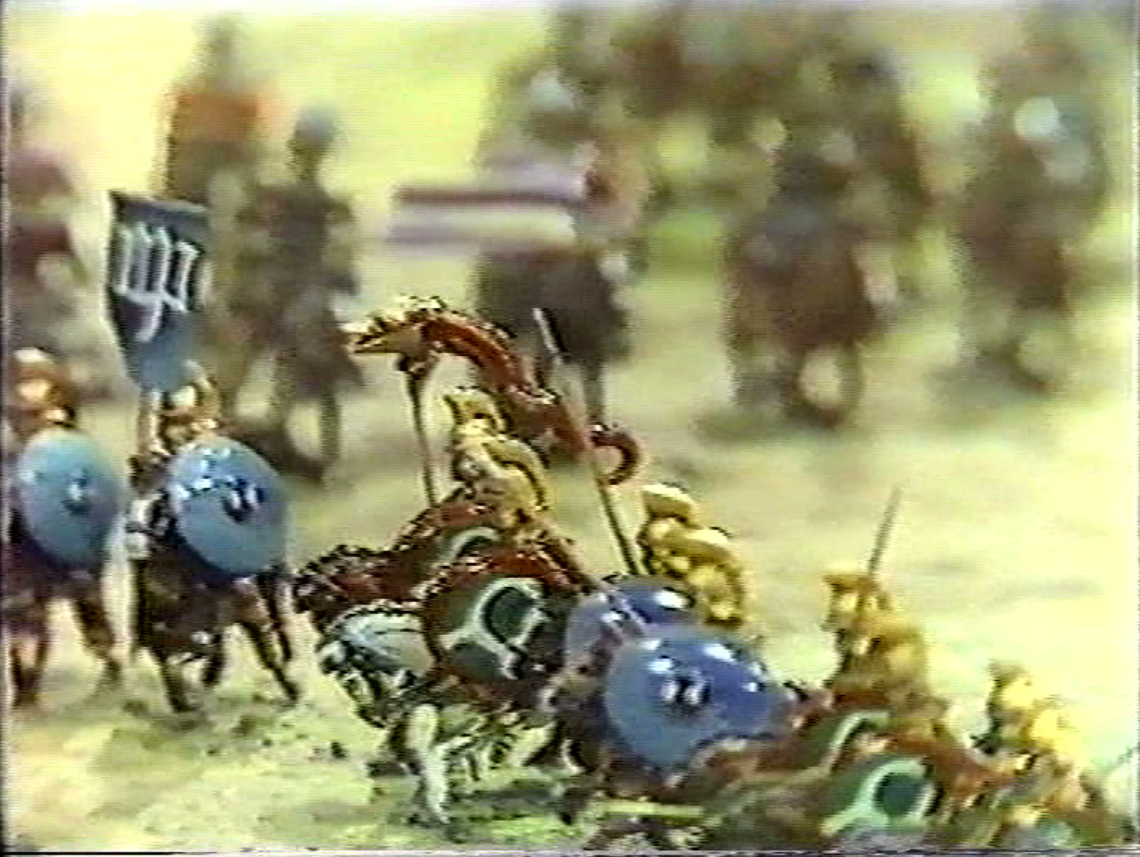 Even if the Roman Empire as a whole was in decline, at least they still got properly dressed when they went out!