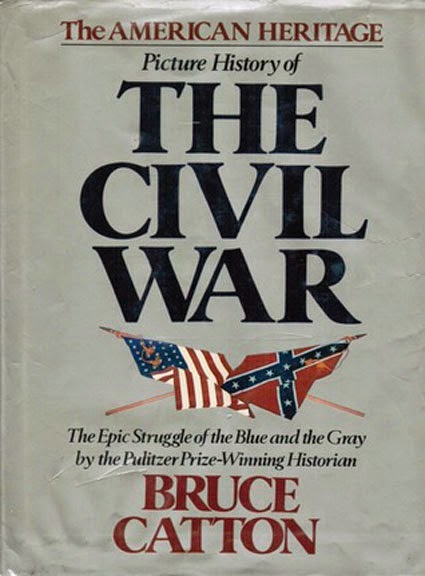 The mysterious identity of the artist whose work has haunted me for three decades was answered when I received this book.


A couple of my previous posts have mentioned a series of battlefield maps that have haunted me for years - probably about 30 years in all - so quite a while! I always thought I'd originally seen these in the pages of National Geographic, as a result of which I eventually tracked down a series of articles that the NG ran, in the 1961-65 period, commemorating the centenary of that fateful conflict.

Whilst there were indeed a few maps of a type similar to what I recalled, only one of them really jibed with those golden memories. So, truth be told, I was rather disappointed. There was at least the consolation of being reminded of the great work of Frank Vizetelly, and the anonymous engravers who turned his sketches and notes into such tremendous images for the Illustrated London News. But still, as good as that was, it wasn't what I'd set out in search of. 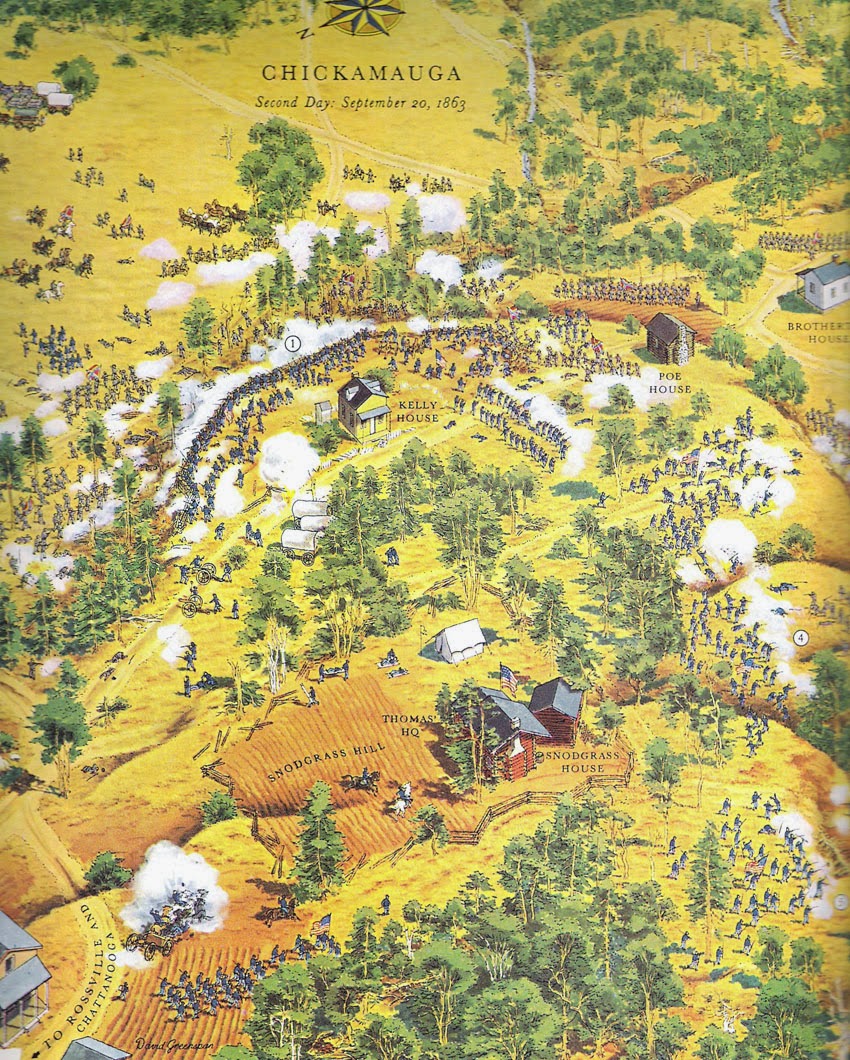 A portion of Greenspan's Chickamauga artwork.

Fortunately for me, the interweb came to the rescue: I'd posted about tis whole affair on TMP, and a guy called Jeff replied, mentioning a couple of other publications I might be interested in. One of these was The American Heritage Picture History of The Civil War (pictured at the top of this post), a big fat compendium of photographs, prints, sketches, paintings, maps, posters, in short all sorts of Civil War related visual material. And amongst all these riches - joy of joys - the very battlefield maps that had, at some distant point, been seared into my youthful synapses.

So, after all my searching, it wasn't actually the work of Robert and Dorothy Nicholson, who'd created the very similarly styled 'Surrender at Appomattox' artwork, that I was remembering, as I'd grown to believe. No, the works in question were the creations of one David Greenspan. At the time of writing this, I'm in something of a haze of joy, an almost drug-like euphoria, as I sit, with the American Heritage tome upon my lap, thumbing through it all, lingering especially on the works of Greenspan.

I haven't had much time to do any proper delving into the backstory yet, but what little time I've had, I've used. And so far I've established that the 'battle maps', as they're usually referred to, were probably specifically commissioned for the Picture History of The Civil War, and probably by none other than the editor of this great work, also a founder of American Heritage itself, a certain Mr Bruce Catton. 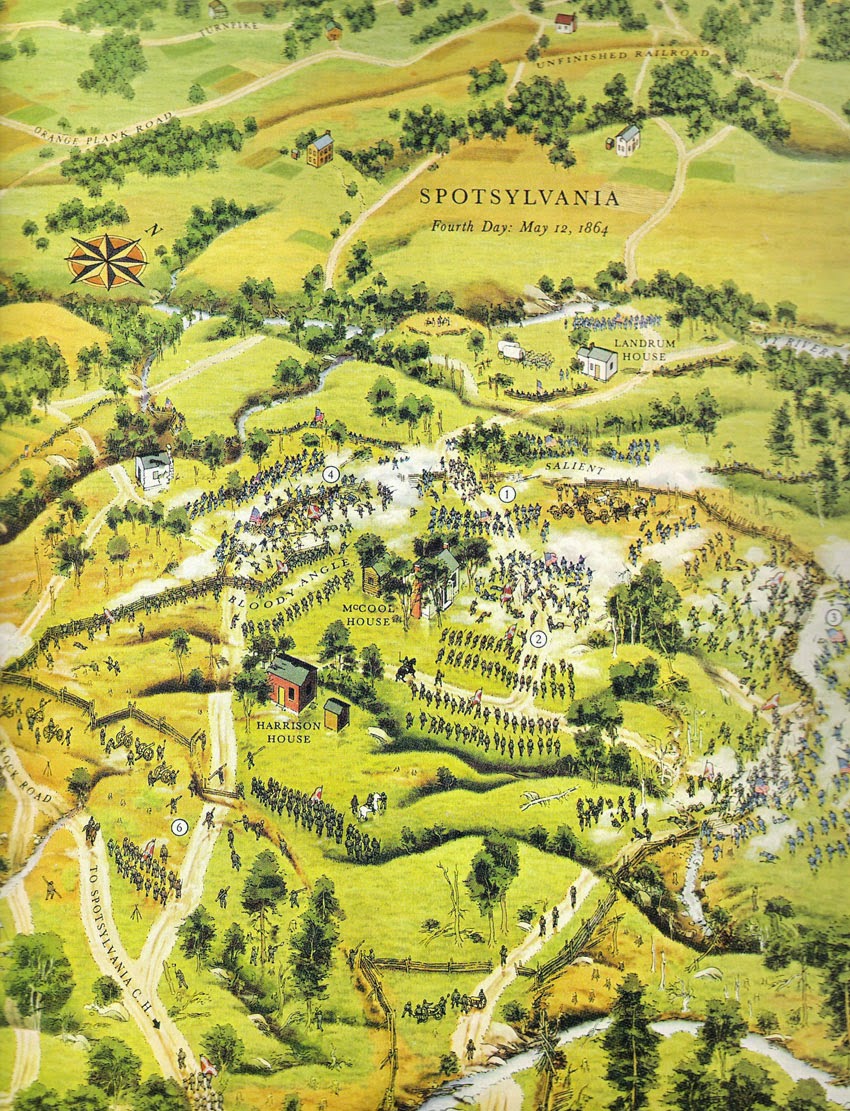 Spotsylvania (the American Civil War is littered with what great names, of battles, generals, etc.), in the inimitable Greenspan style.

Catton is well known and was, in his lifetime, much lauded Stateside. But here in the UK his is not a name I'd encountered before. And it's the same, but to an even greater degree, regarding David Greenspan, with the difference that the latter is also unknown, by and large, in his home country as well. I did, however, find quite a lot of people (mostly American, unsurprisingly) raving about Greenspan's artwork, many saying it was the very thing that had awakened a passion in them for history in general, and Civil War history in particular.

Now, I'm still perplexed as to where I first saw Greenspan's work. My memory is categorical: it was in issues of the National Geographic. And, whilst I recognise the Greenspans in the American Heritage Picture History, I don't believe I've ever seen the book as a whole before. Can anyone help unravel this conundrum?

All this sleuthing has meant I've also become aware of the work of Richard Schlecht which, whilst similar, is certainly not what I remember from my youth. I do have a Robert P Jordan title on order, which is also from National Geographic. Maybe that will shed some light on all this? 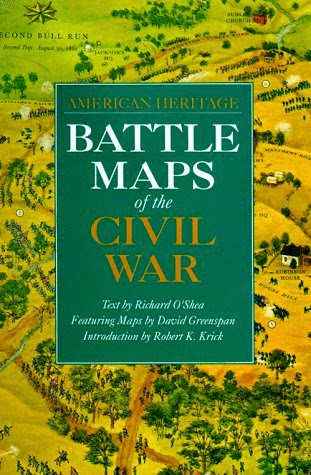 Another title that I've ordered is the one pictured above, in which Greenspan's work is, quite understandably, the star of the show. I believe the above Battle Maps publication simply reproduces the same stuff as the original Catton book. But hey, you can't necessarily have too much of a good thing, especially if, as Harry Pearson's chum says in Achtung Schwienehund, it's something you didn't really need in the first place!

If Greenspan's originals were commissioned in the 1950s, and we find the Nicholsons working in a near identical style in the mid 1960s, it seems fair to speculate that the former may well have influenced the latter. Richard Schlecht is currently very busy in the historical line, and some of his art is in a disctinctly similar vein, and there are other artists, such as Brian G. Kammerer, who are, by their own account, indebted to Greenspan for inspiration. 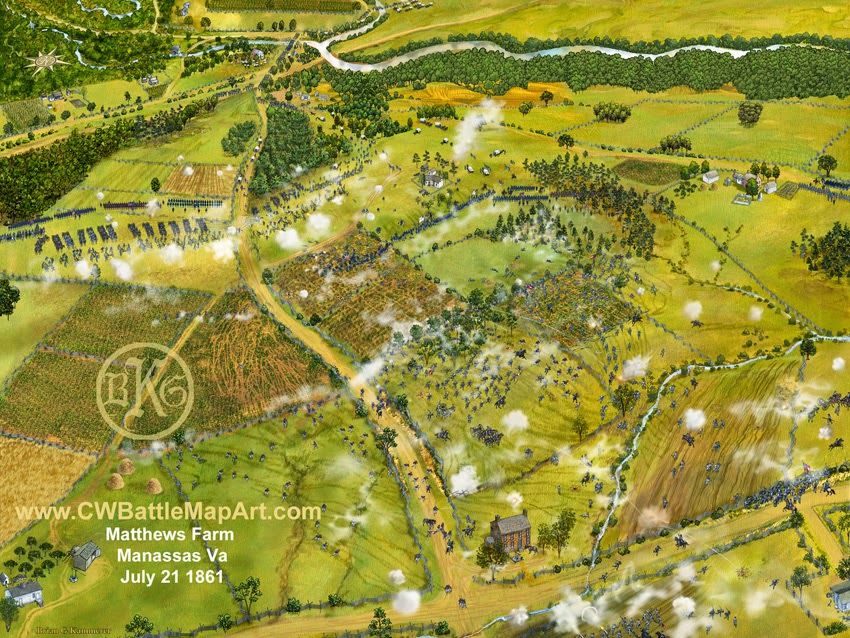 I contacted Kammerer via his ACW art website, as linked to above, and he kindly gave me permission to reproduce one of his artworks here. The above piece shows the Matthew's Farm Fight. It's great to see that Greenspan's legacy lives on! Indeed, many of modern computer based wargames use a very similar style of isometric bird's-eye view of the battlefield. I wonder if Greenspan's work fed into that world as well?
Posted by Seb Palmer at 10:22