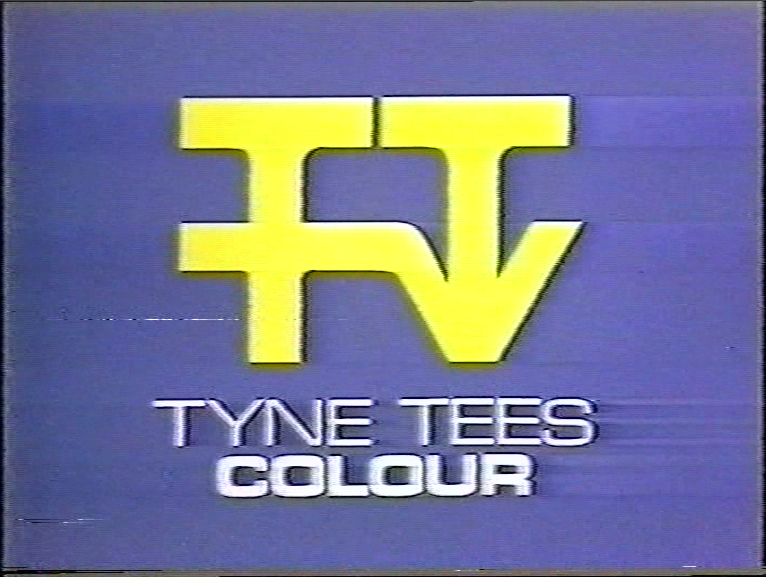 The familiar old TTTV logo of Tyne Tees Television, the Midlands area TV production company who made the series. 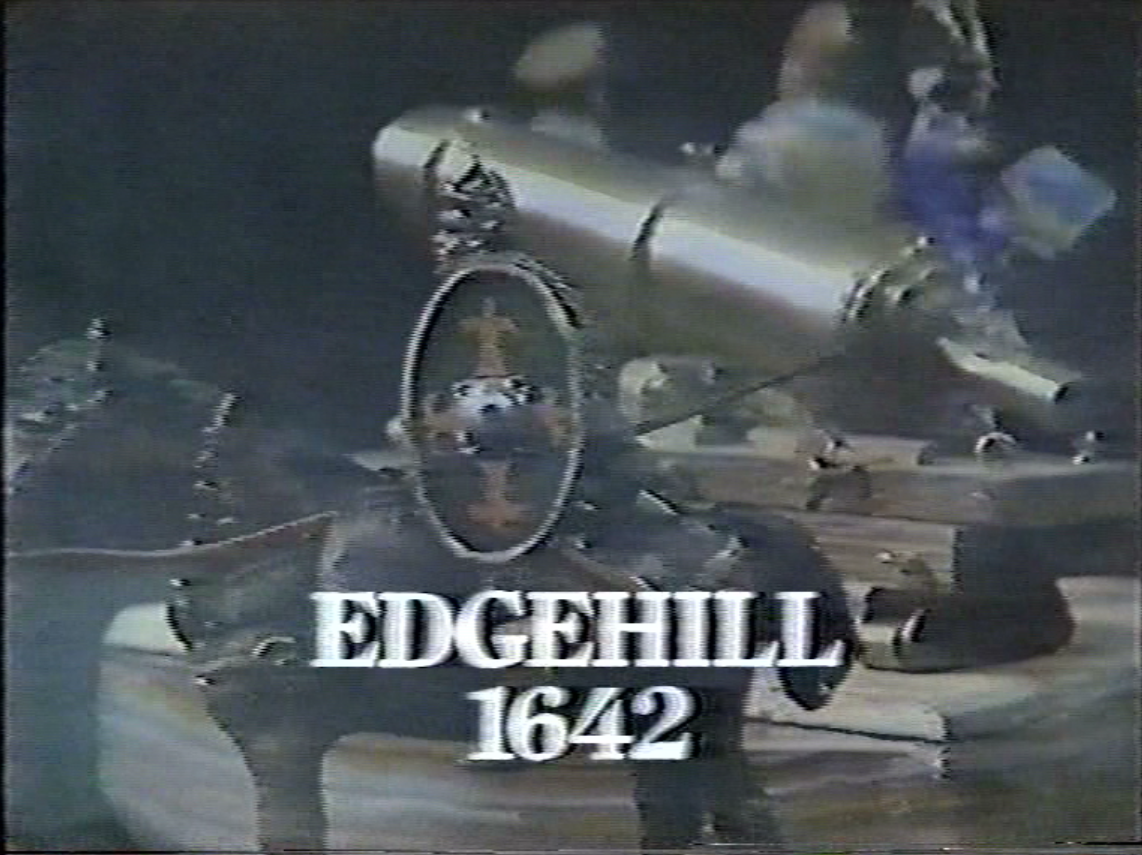 To the sound of a fairly Spartan theme tune, suitably martial and with a certain gravitas, the episodes subject is announced.

The Battleground TV series kicks off with Duncan MacFarlane and John Tilson, both natives of Hull, refighting the ECW battle of Edgehill. Woodward fills us in a bit on the players: 'Duncan MacFarlane is a very experienced wargamer. Professionally he's a school librarian in Hull... today he's commanding the Royalists... Also from Hull, John Tilson, commanding the Parliamentarians. He's an inspector for a dairy.'

I absolutely mean no offence to these players - I like quietly studious and gentlemanly deportment (and I kind of hope I lean that way myself) - but I must confess that I'm a little surprised the producers didn't start off with an episode that featured not only Gilder's great figures and terrain, but the man himself, as he is, in my view at least, easily the most TV-friendly, i.e. conventionally charismatic, of the gamers chosen for the series. 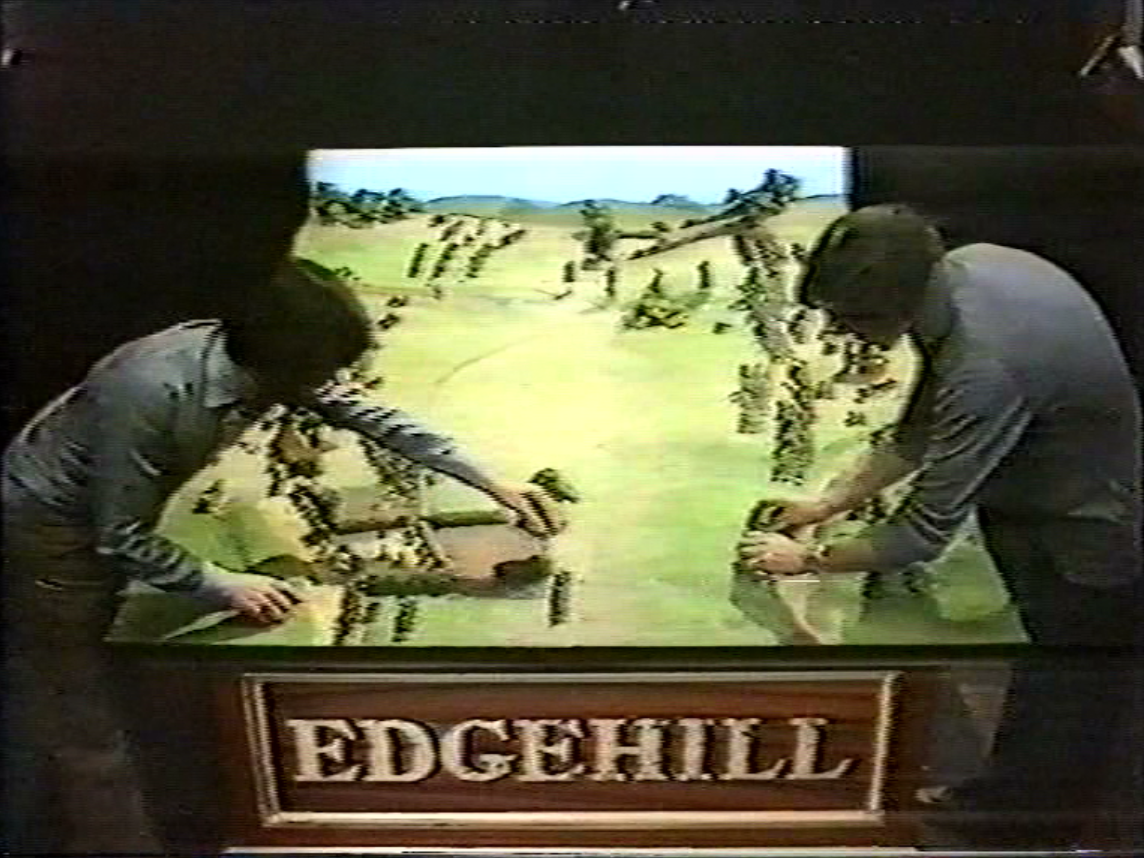 As Wise said in his piece for Battle, the programmes producers were contending with 'how to produce a series on a minority hobby which would sell to the commercial television companies, which must, by their nature, reach the maximum audiences possible.' In this context such a modest and unassuming start, most emphatically not brash in content, was bold in programming terms!

Apparently the select few who do feature in the series were chosen from a rather larger field, numbering about 100! In referring to the more robust performance of Gilder and Braithwaite in the Waterloo episode Wise says 'other players were more tense because of the circumstances'. Woodward of course was used to performing in front of the camera, and Gilder had some media exposure through his involvement in Callan, but the rest of the gamers would be in the glare of the studio, one assumes, for the first time, and it does show a little.

But, as I said above, this gentle seriousness locates the series in what may well be a decidedly bygone era, and I like those qualities, and lament the passing of them. 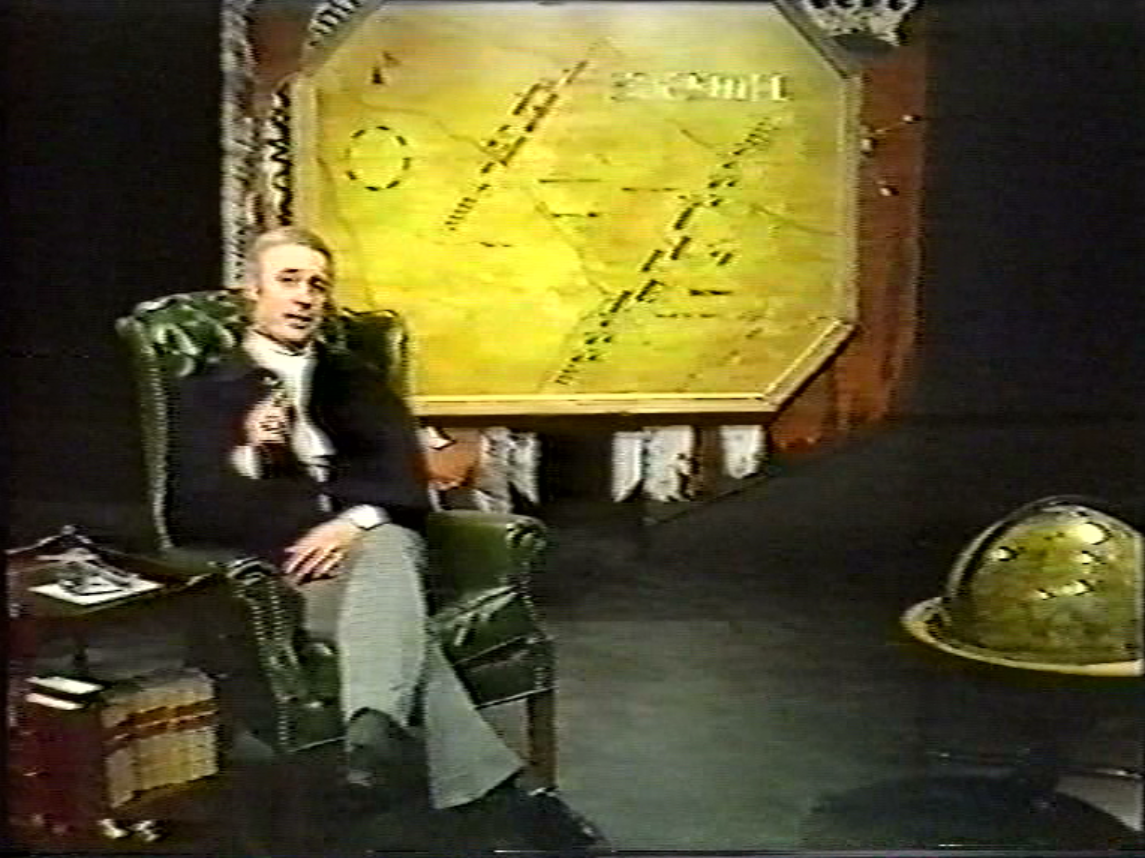 E'wa' Woo'wa', as I used to call him (when watching The Equaliser as a kid), explains the nuts and bolts - or should that be shakos and shabraques? - of wargaming

Addressing a theme close to the heart of this blog, Edward Woodward mentions very early on that the figure ratio is 1:20, helpfully explaining to the uninitiated what that means. He doesn't go into the other myriad aspects of scale, such as ground scale. This is, or rather was, after all, a show clearly intended to win the hobby new converts, not send them running with a mathematical migraine. 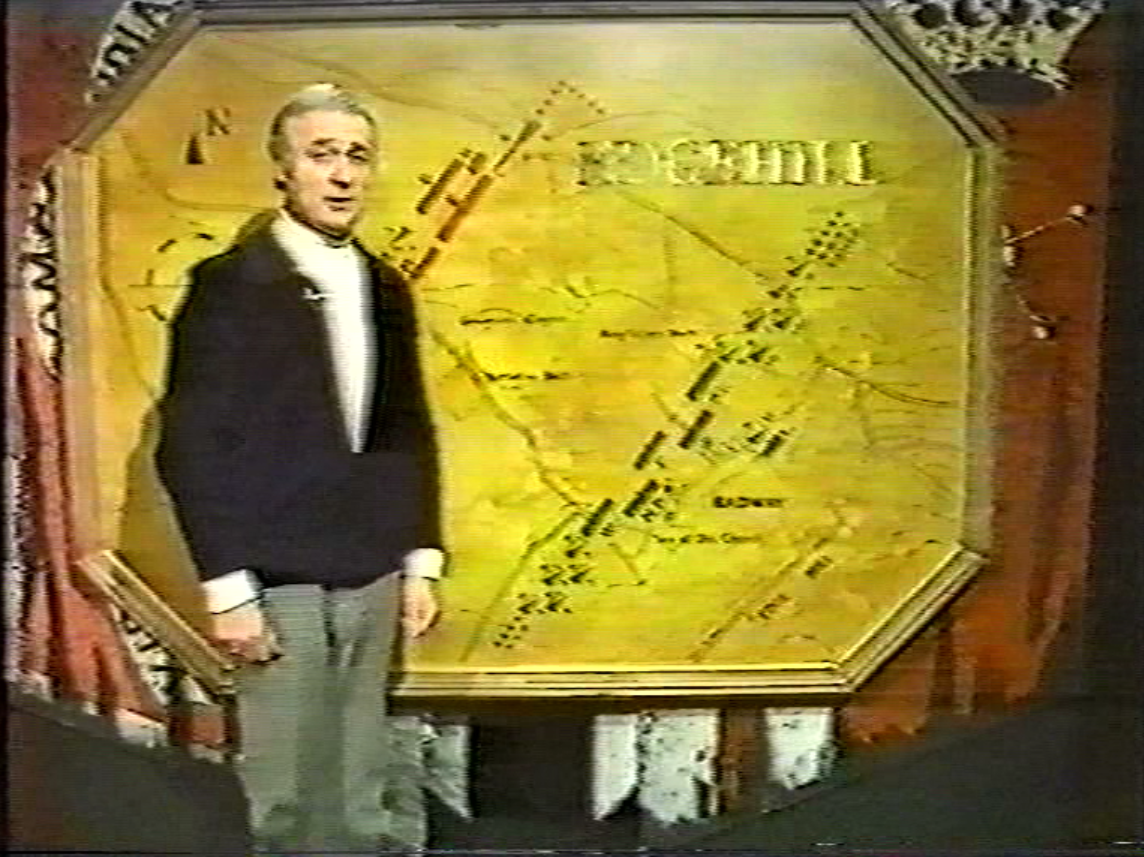 EW in teacher at the blackboard mode.

A few words of wargaming wisdom from our avuncular host, EW:
- 'Wargaming was once called, by H. G. Wells, chess with 1000 pieces. I rather like that.'
- 'Please don't panic, because wargamers really are a friendly lot! And anyway, you can always borrow a battalion.'
- 'Remember, it's not a re-enactment, it's a wargame. And we may very well reverse history!'
- 'Wargamers have to know their history.' 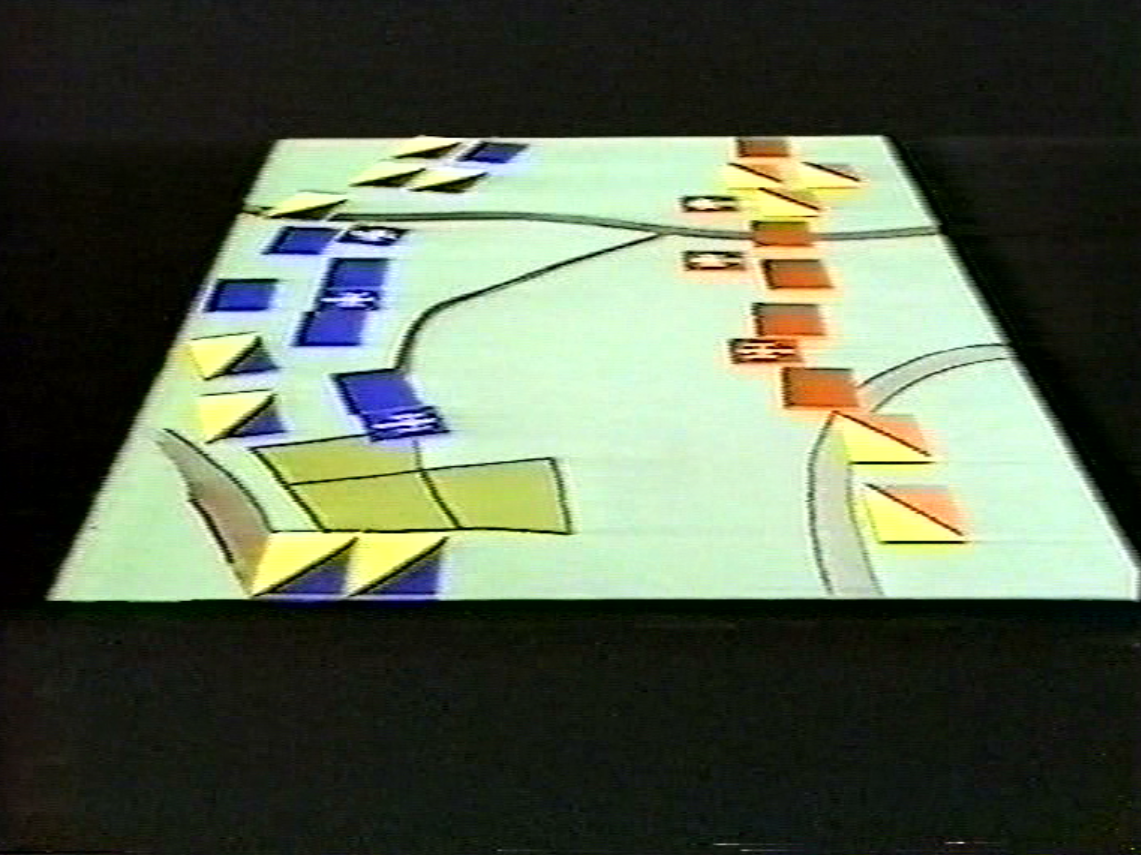 Maps like this one, which depicts the how things stand at the start of Edgehill, are used to study dispositions at key points of the games.

Once the expository stuff is out of the way, it's 'let battle commence'. I won't be saying much if anything about the battles covered in the series, as I'm assuming either prior knowledge, or that the information can/will be gleaned elsewhere. 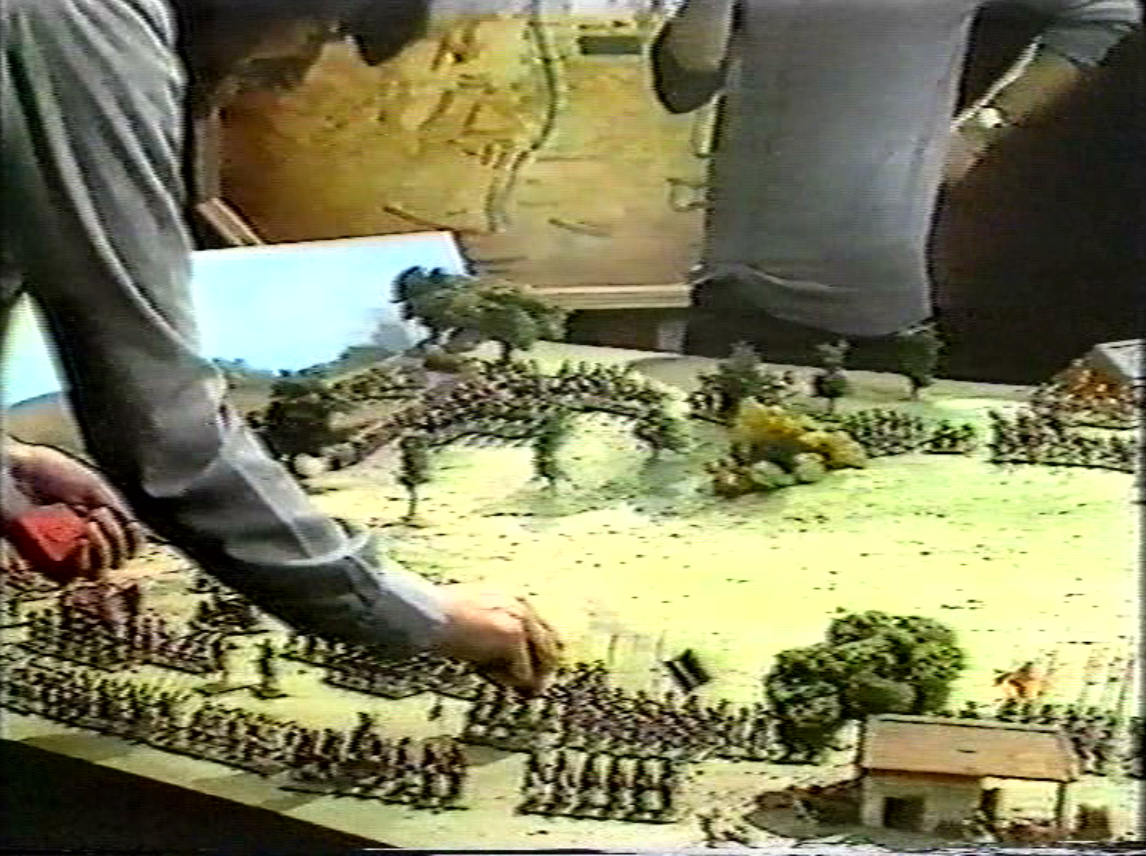 Tilson gets busy as Macfarlane looks on.

In writing about this series, I feel forced to make a confession - and though I could attempt to hide it, it might be apparent in how or what I write anyway - so, here goes: the truth is I've always been more a figure collector than gamer. Indeed my last games were back when I was 15-16 years old, over 25 years ago! The rules we used were the home-brewed concoction of a teacher at my secondary school, and really quite primitive! 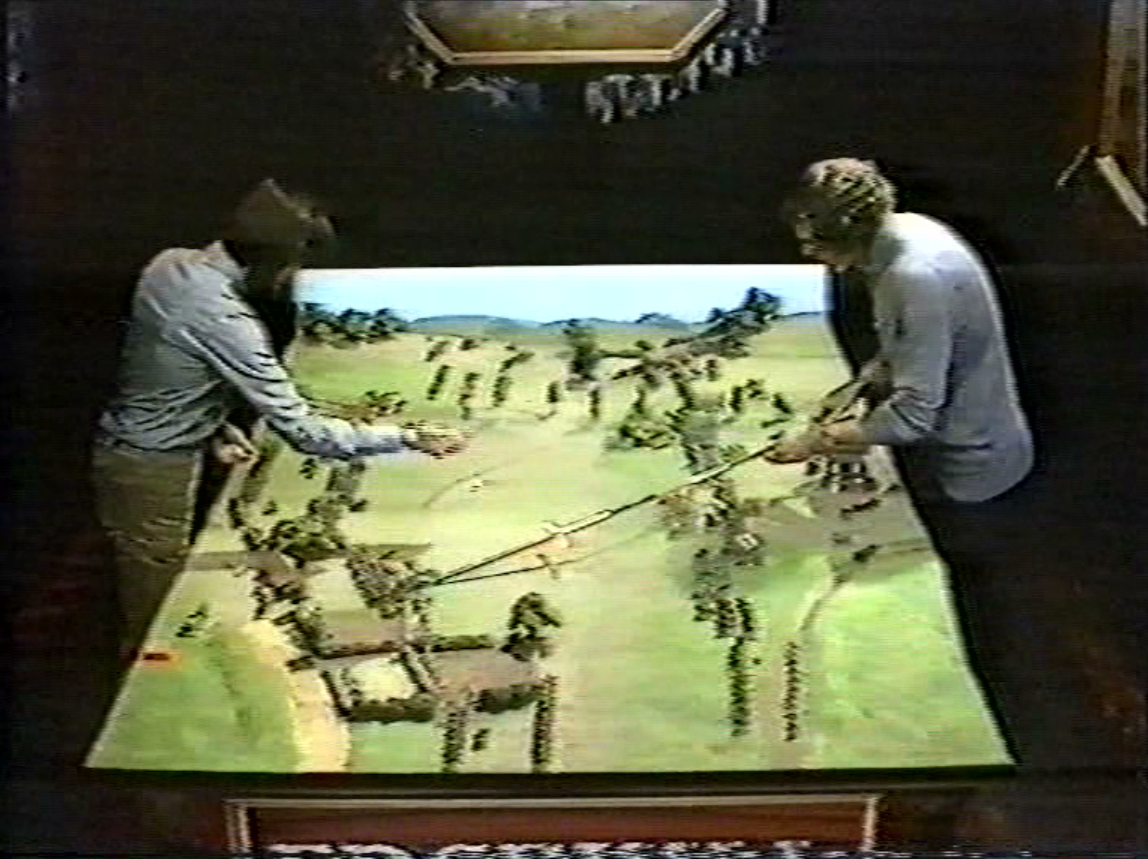 Out comes the divining wand.

So, having such a dearth of playing experiences, and those lost in the mists of prehistory, I can't really make many useful comments on such things as the rules used, other than to say that they look both functional, and, judging from when this was made and what I've seen at wargames shows recently, quite old fashioned.

Whilst dice, rulers and rule sheets remain amply in evidence, I don't think I've seen people using those rather nice range-finding sticks, and such like, such as these guys use. As I'm still in the army-building phase of my return to the hobby, I don't know if I'll go all old-school, rules wise, or use more modern ideas. But I might well see if I can incorporate some nicely coloured sticks, one way or another! 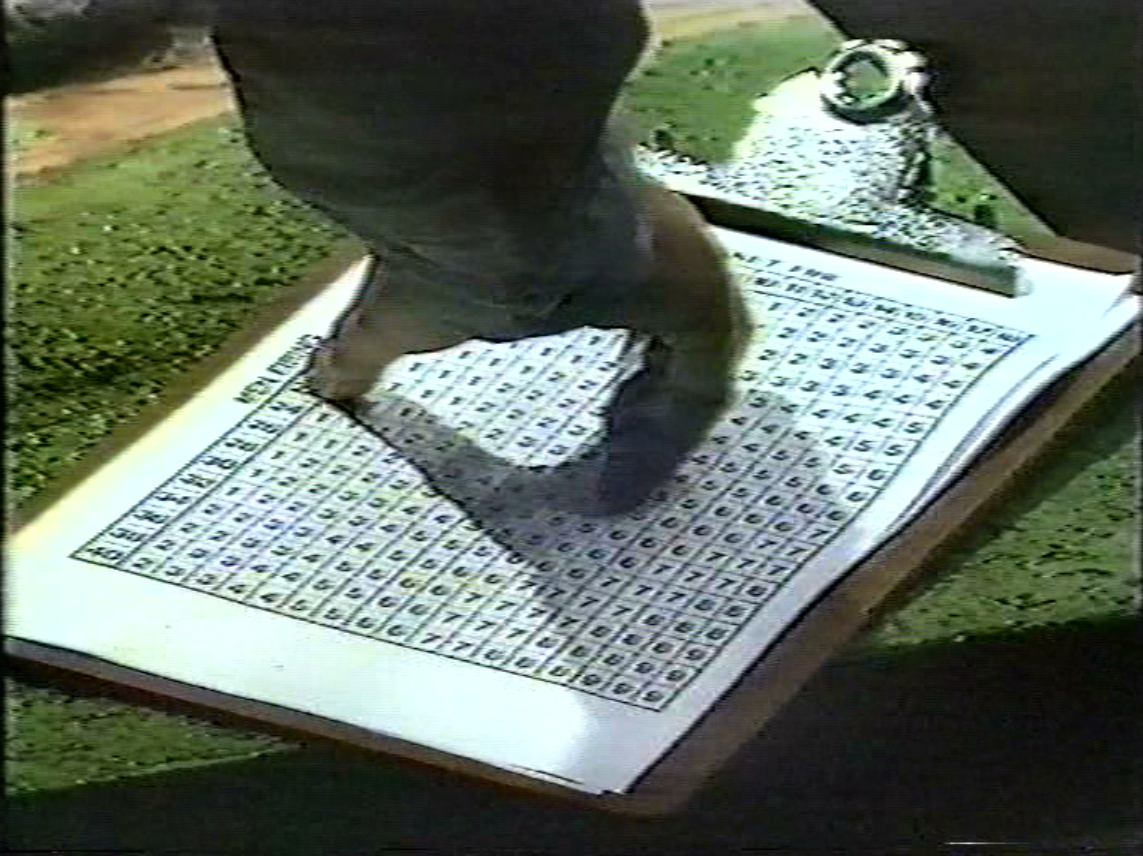 Data, an all important category in the five pillars of wargaming, as laid down in Laurie Taylor's TV Times review of Battleground (see my introductory post).

I must say that I like the feel, at least as shown on screen here, of the way they play, as it seems as naturalistic as a classic 'eye-in-the-sky' type wargame could be, without becoming so overly concerned with detail as to become unwieldy. But then again, these games were played over days, and what we see on the screen is a highly compressed version... so, who knows how the games actually felt to play?

Perhaps some more seasoned or experienced players, should they chance to read this, could enlighten us? I'd be fascinated to hear. One thing that's always bothered me, theoretically at least, is the omniscience an 'eye-in-the-sky' general has that a real commander on the ground, back in most of the eras Battleground covers, simply couldn't have had. 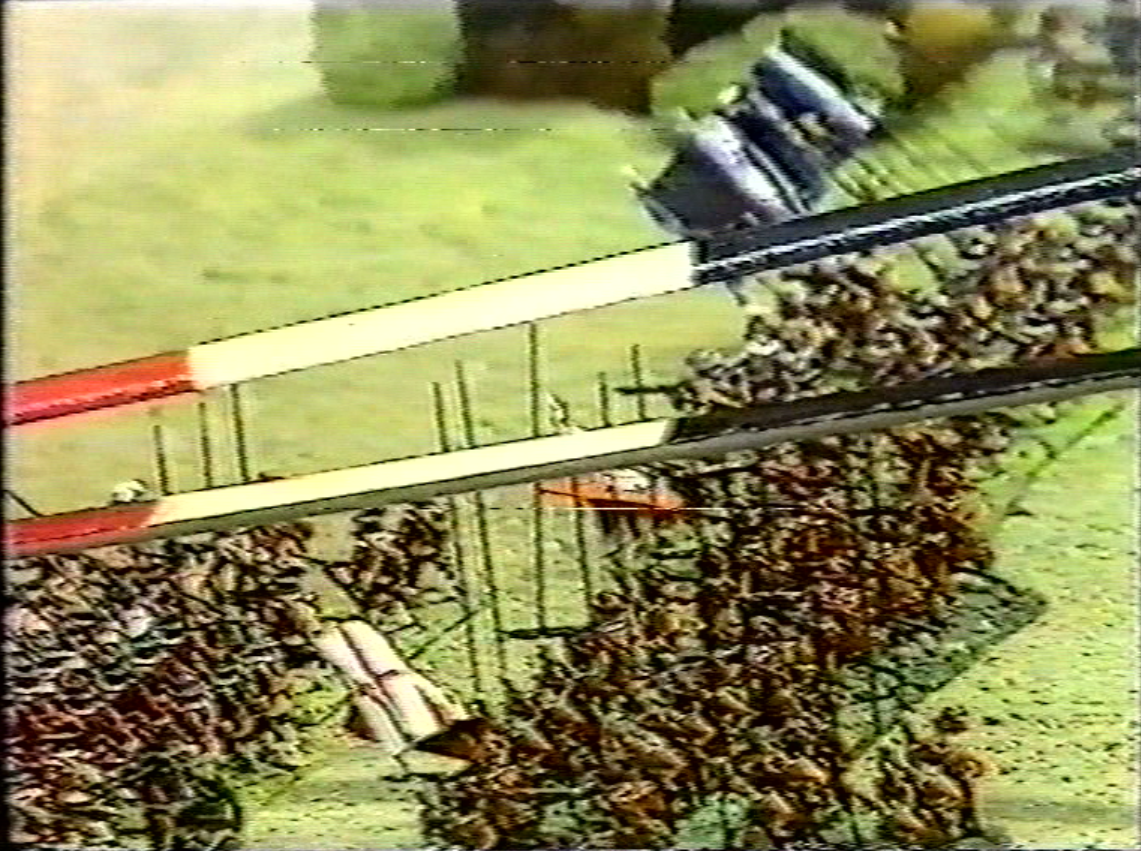 'The White Zone is for loading and unloading only'... Well, no, not in this instance!
I read somewhere - his own homepage I think - that Paddy Griffith, one of the 'historical consultants' for Battleground, often favoured the Kriegspiel approach, in which players were physically separated and play was mediated though umpires. Indeed, he was instrumental in the later (and less successful) series Game of War, which was based more in the Kriegspiel model.
With these musings, and that rather large confession of my own personal inexperience and ignorance out of the way, I'll resume!

John Tilson is not a name I can immediately recall from my own wargaming childhood, whereas Duncan MacFarlane is. If I recall aright, the latter's name was often to be seen in Miniature Wargames, as both editor of the mag, and contributor of numerous articles. I think he might also, later on, have been publisher of Wargames Illustrated, but by that stage I'd exited the hobby. 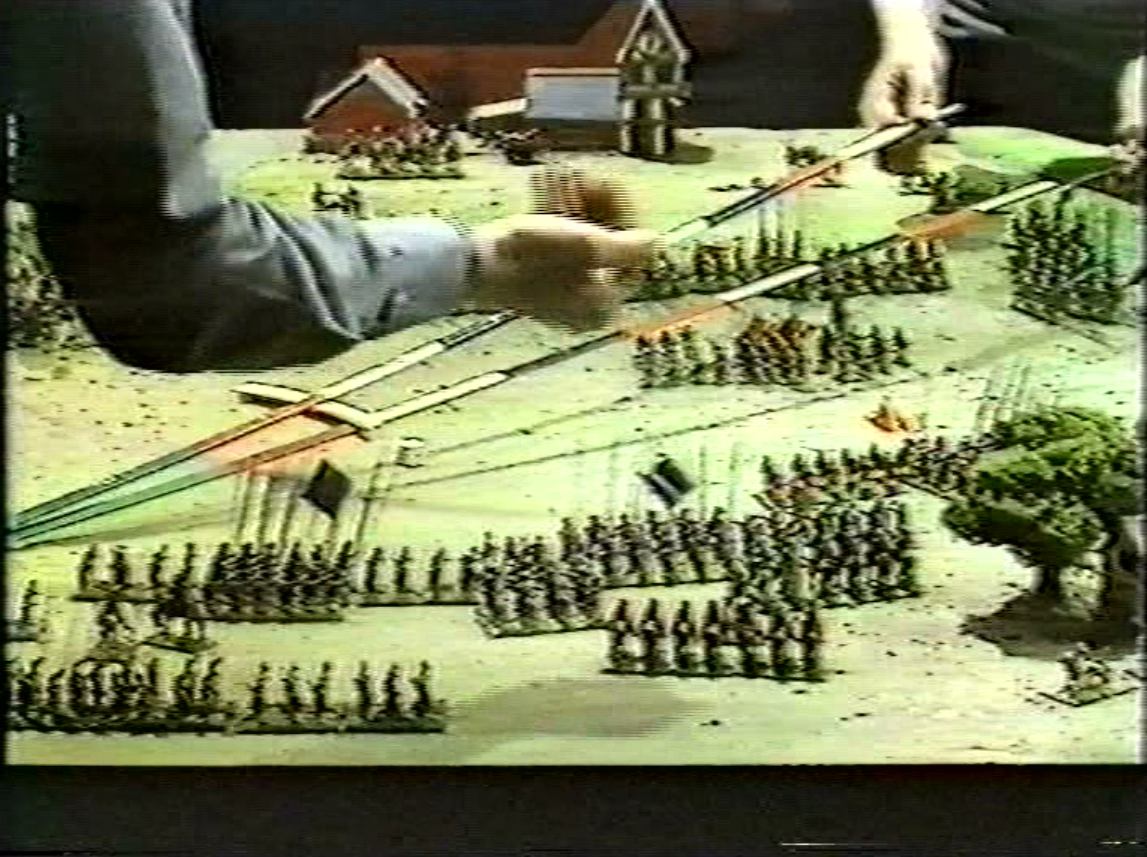 As already alluded to above, both players are rather quiet and demur, making the odd near inaudible wise-crack, such as when Tilson's artillery mauling of MacFarlane's Life Guards regiment leads him to refer to them, almost under his breath, as 'Death Guards'! Neither is what I would describe as volcanically charismatic, and yet they were amongst the few chosen from about 100 possible players, according to the Battle article. This leaves one speculating as to how the other 90-odd gamers might have performed in front of the cameras! 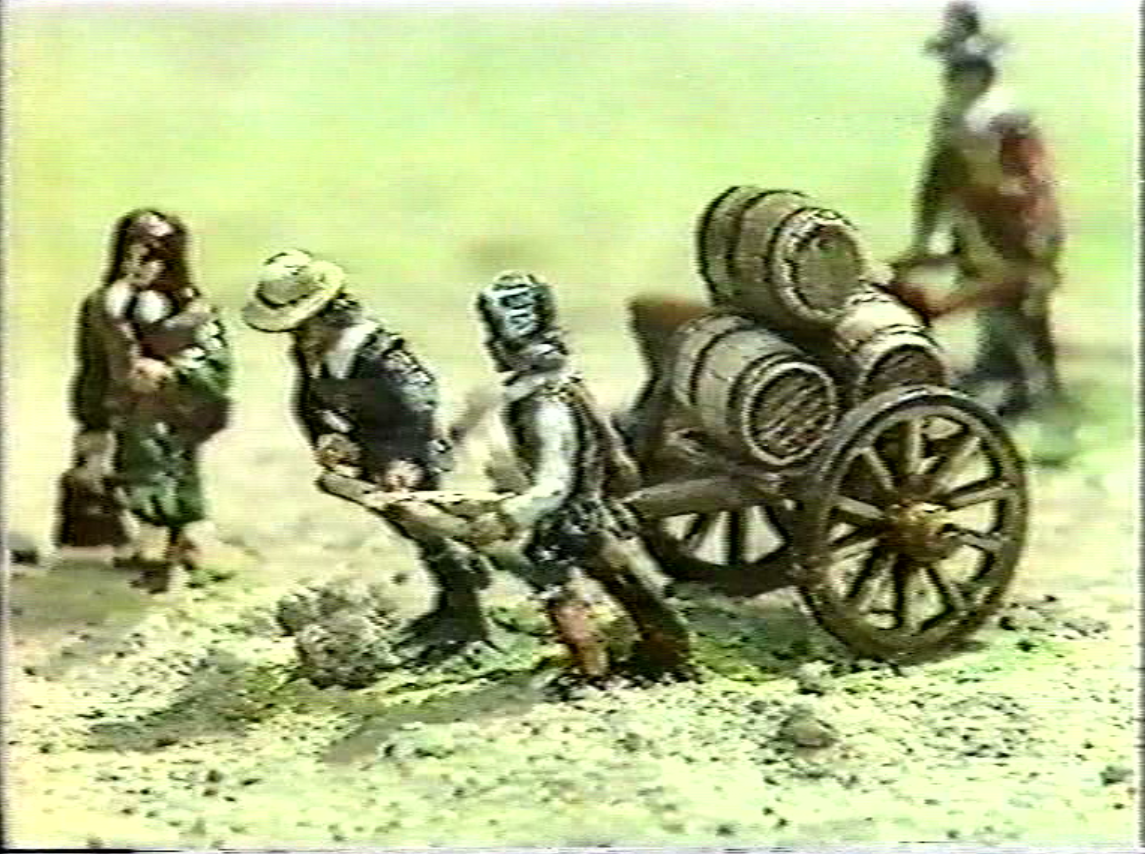 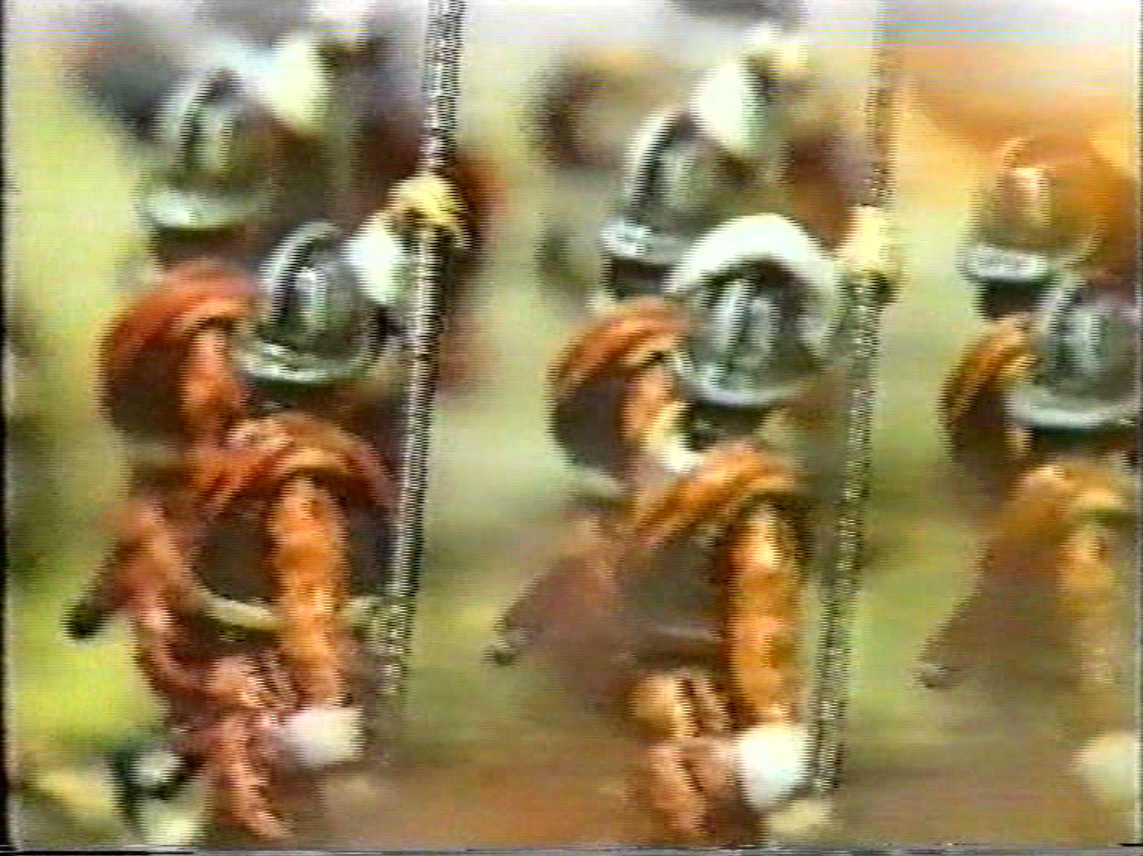 Sadly the old video footage captured here doesn't do these figures much justice, still, it ads a certain patina of antiquity, perhaps?

So it's fortunate Sergeant Howie from The Wicker Man, a.k.a. Edward Woodward, was on hand, to bring some relaxed media-savvy personality to proceedings. He clearly enjoys the elements of historical knowledge, strategy and tactics, and so on, that are without doubt amongst the key factors that attract many of us to the hobby, as well as the fun of collecting and painting the figures, creating the terrain and so on, all of which Woodward mentions as being amongst the attractions of wargaming, in this opening episode. 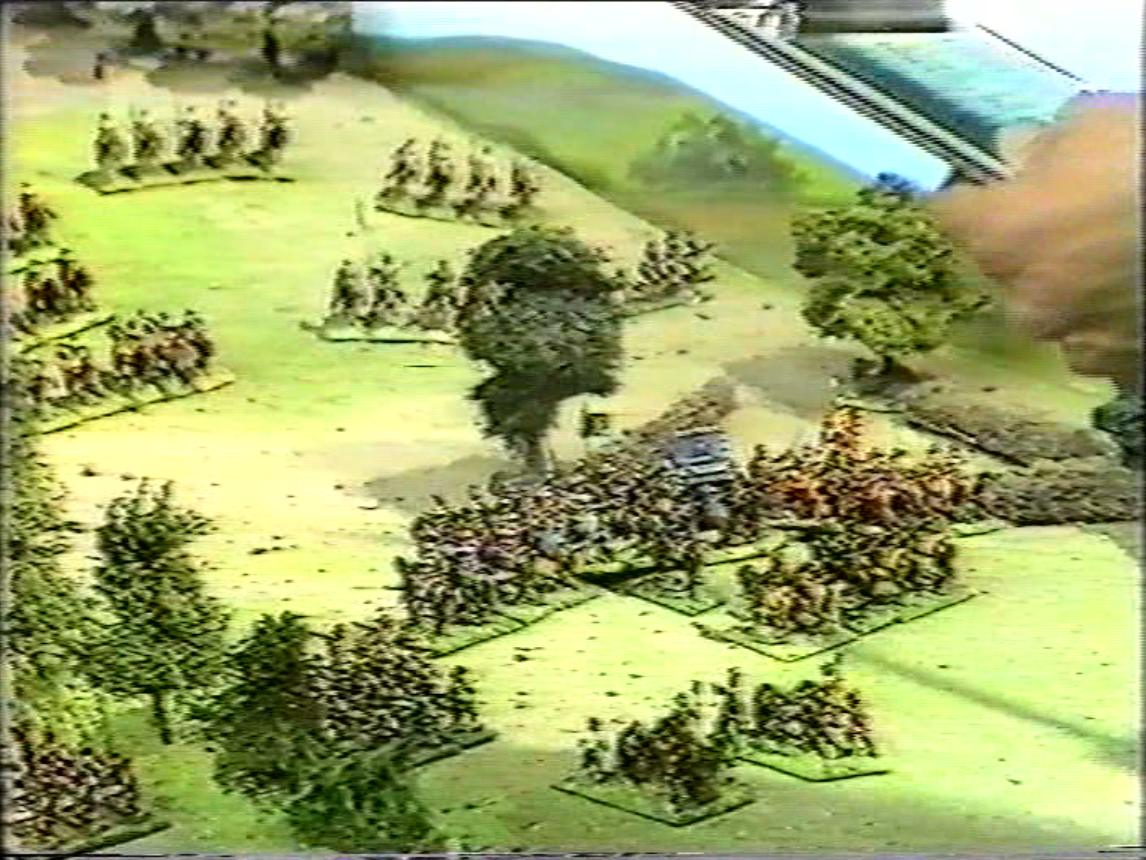 The following series of pics follows the action as the game matures. 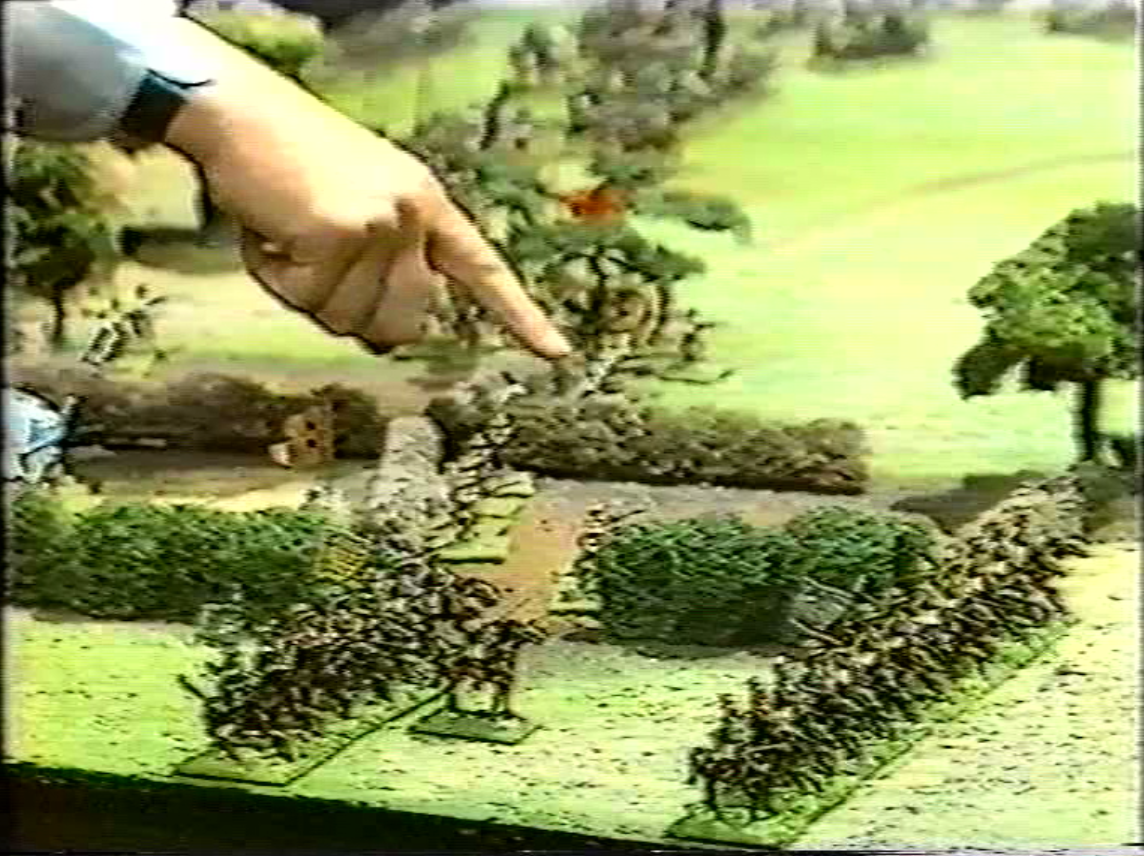 Beware the 'hand of the wargaming Gods'! This screen-shot actually brought to mind imagery from Terry Gilliam's Monty Python animations. 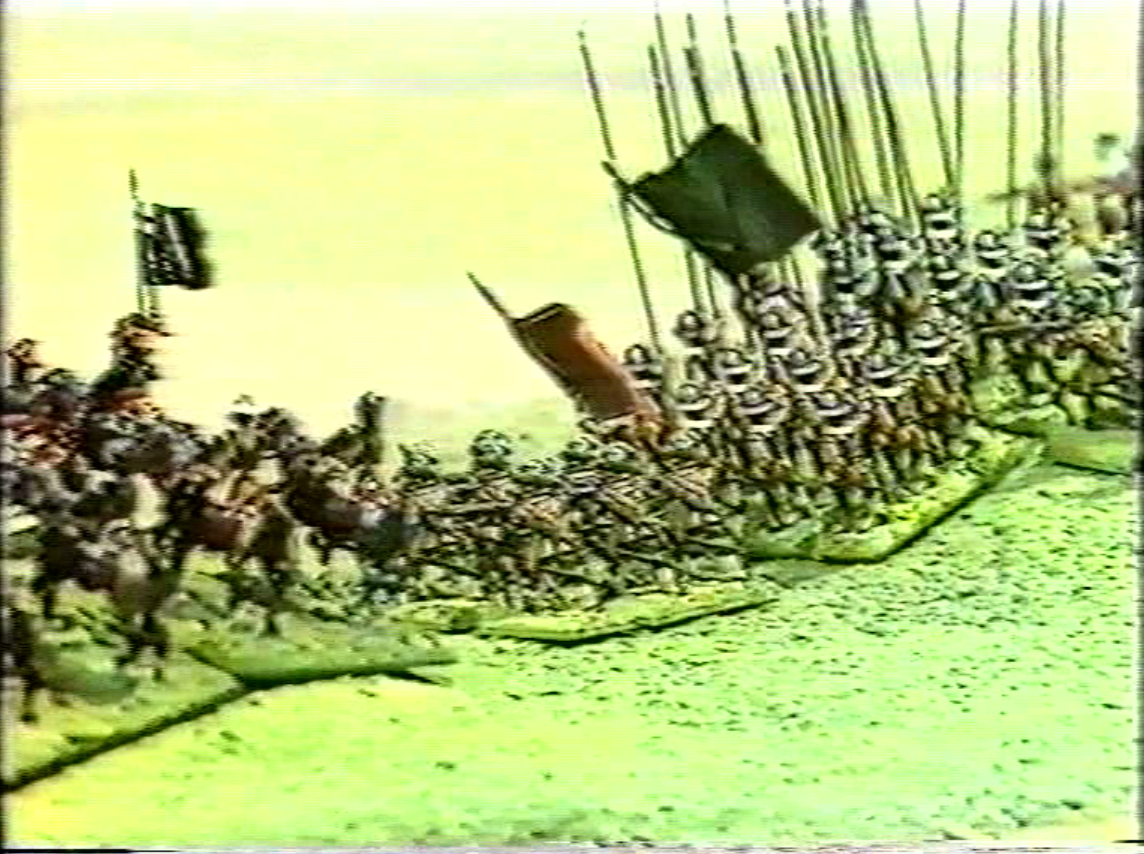 Troops nicely aligned along the snaking slopes of the terrain.

Woodward's final synopsis of the re-fight of Edgehill is excellent, being a very succinct summing up of all the action and the most salient factors as to why it turned out as it did. And, as he rather gleefully observes, on this occasion 'we have reversed history, with a decisive win for the Parliamentarians'. 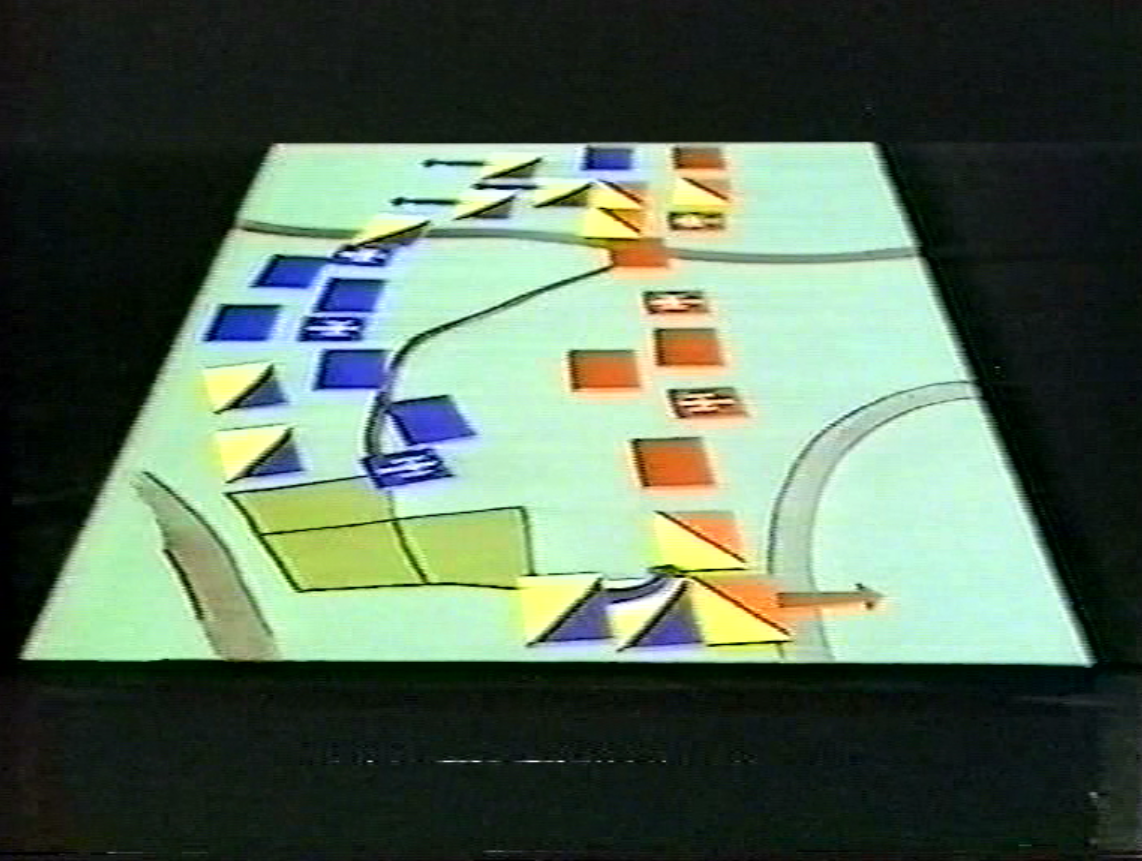 A final look at the map reminds us of what we've just witnessed, explaining how and why it happened. 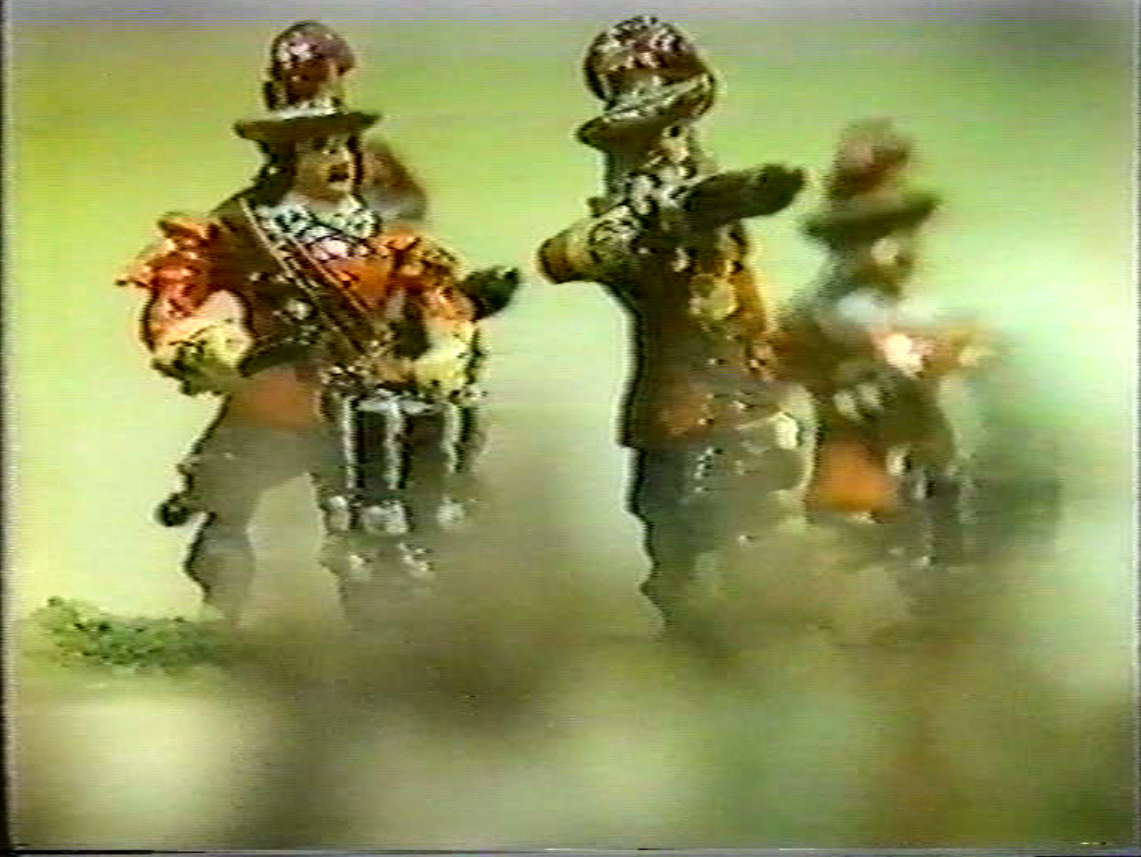 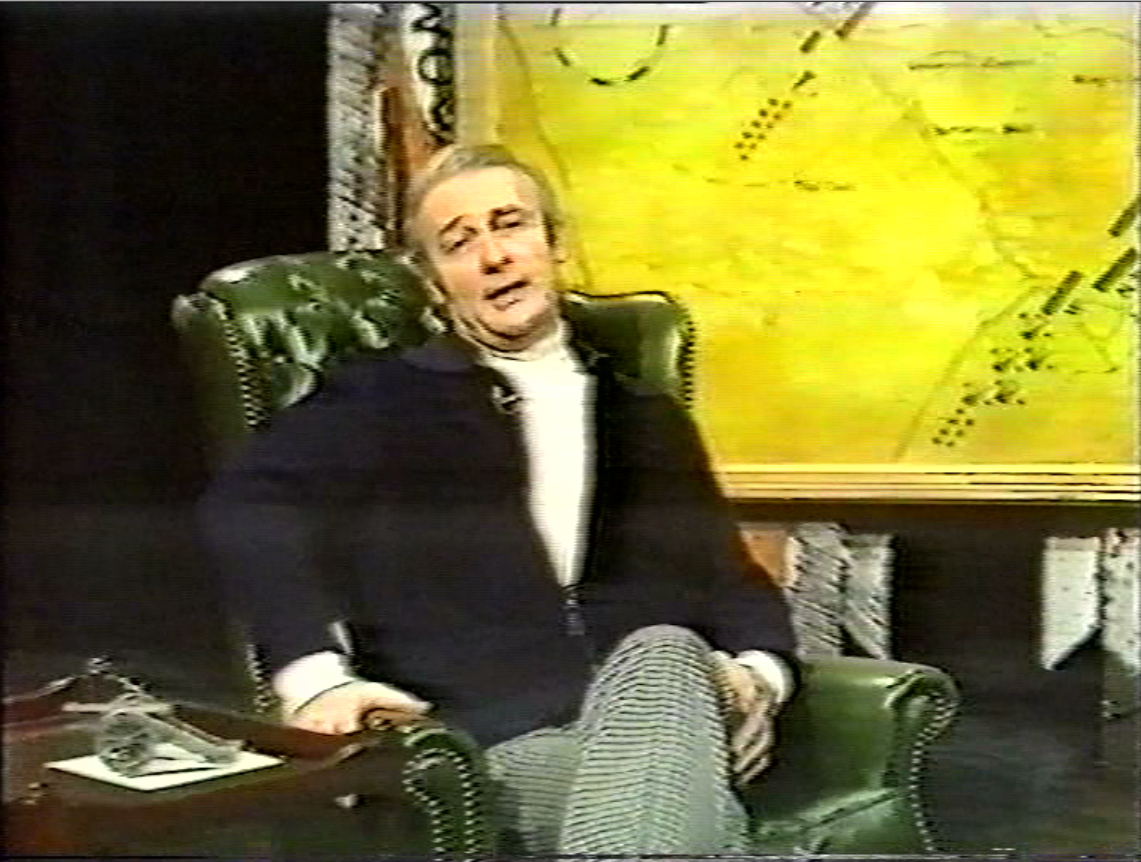 So, as this first episode demonstrates, and as any wargamer knows - even me, with my very limited game play experience! - wargaming isn't normally (although of course it could be) about simply replaying a battle along predetermined historical lines. Indeed, a very large attraction is the idea of seeing what one can do oneself, in the role of a famous commander.

Can one, for example, do better than the legendary Napoleon Bonaparte - whose military prowess and other leadership skills were such that a whole era is named for him - and win at Waterloo? Well, rather neatly for my purposes, that's the very next battle to be fought on Battleground. 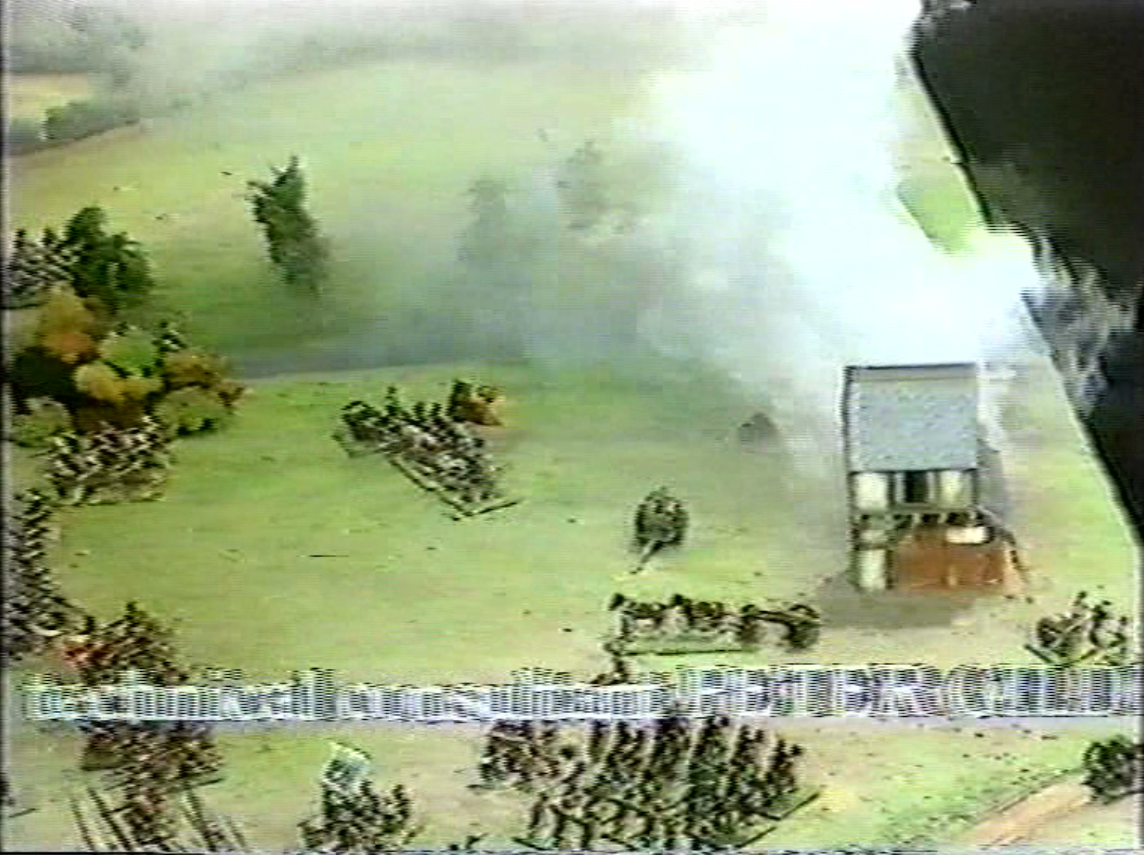 The episode is over and the titles roll; a smoke-bomb or indoor firework type device is used to enhance the visual drama!