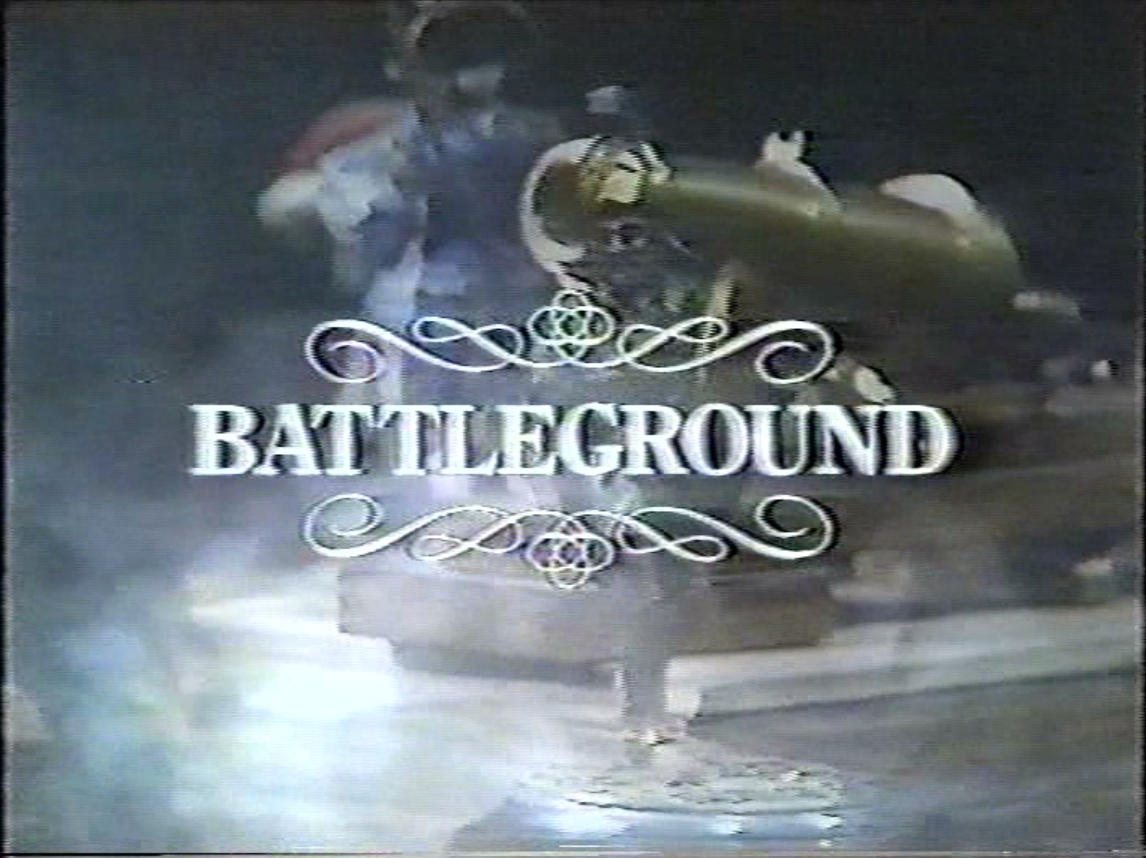 As I watch the second programme, sedulously taking notes, the title sequence and music for the Battleground series strike me as wonderfully 'seventies, in the best of possible ways (images of Kenny Everett in drag come, unbidden, to mind!).

David Attenbourough's magisterial Life On Earth, which took several years to make, and began airing in 1979, has the most terrific soundtrack, and, believe it or not, the Battleground theme has a similarly somber grandeur, albeit with a decidedly martial edge.

I scanned the credits, but no mention of a composer is made, leaving me wondering if it might have been a Music-Library track. We'll return to this theme, if you'll pardon the pun, in due course. 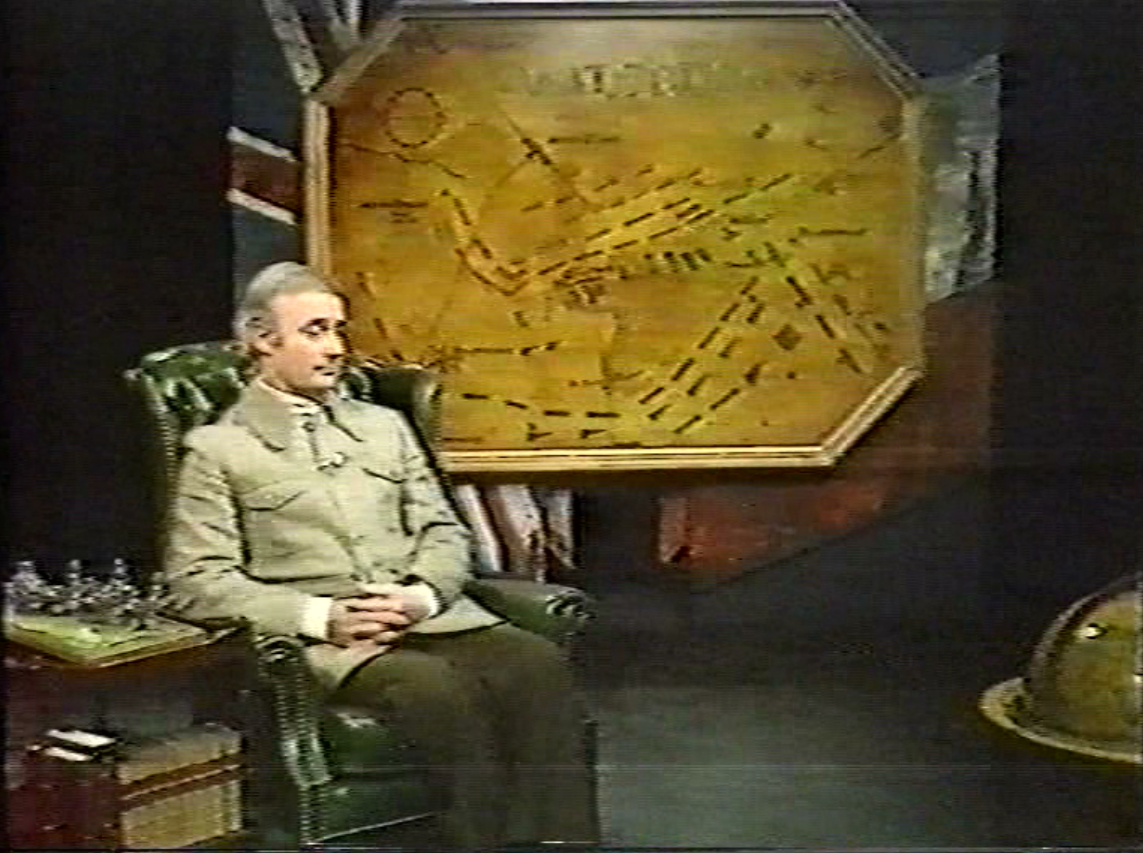 The chief props and paraphernalia for Battleground, including - in addition to ol' uncle Ed' - a globe, the flags of the warring sides, a Chesterfield type armchair, a small chest with books and figures, and the map-backdrop.

Each episode begins with Woodward, sat in front of a large backdrop displaying the series title, ensconced in a rather nice Chesterfield style green leather armchair; looking suitably avuncular, he gives some background to the battle that will be fought. 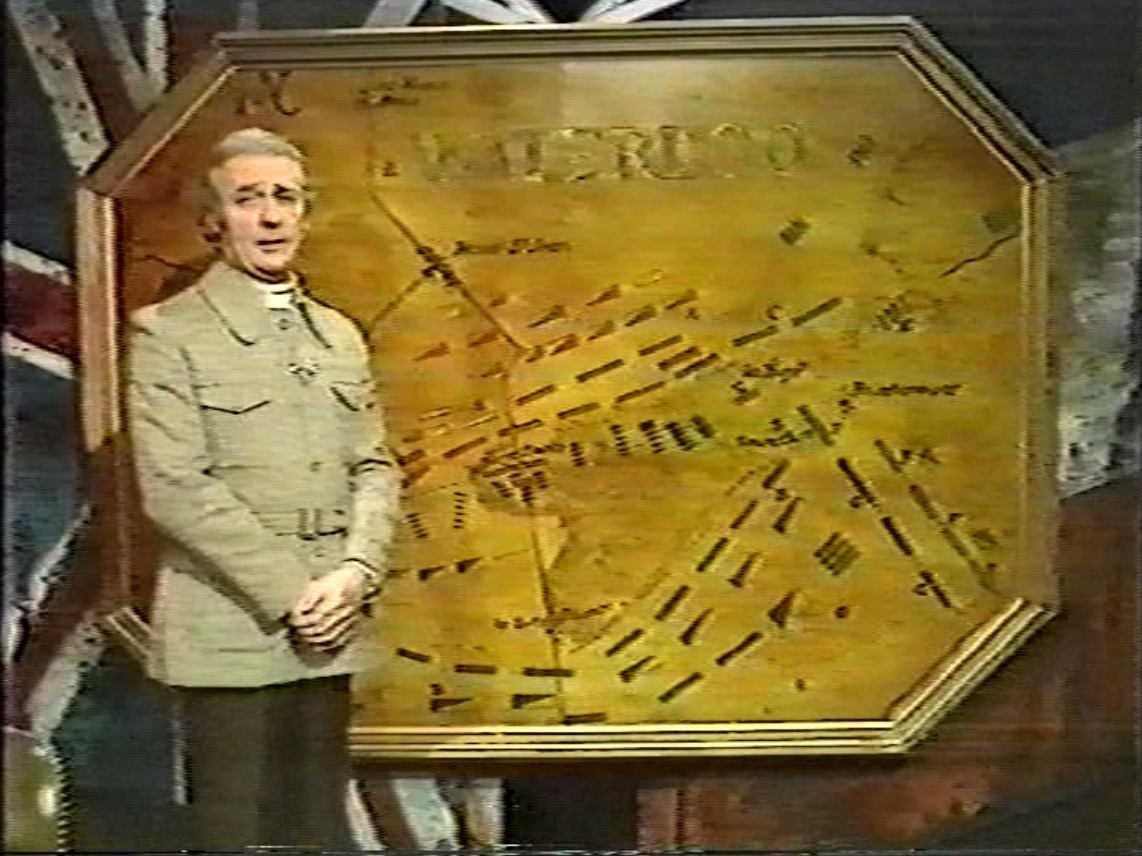 As Woodward moves from the generalities of the era to the specifics of the battle to be fought, he moves over to a large map, and between his gesticulating at this and his relaxed but authoritative sounding verbal description, all somewhat in the manner of a military briefing, we learn a bit about the historical events. 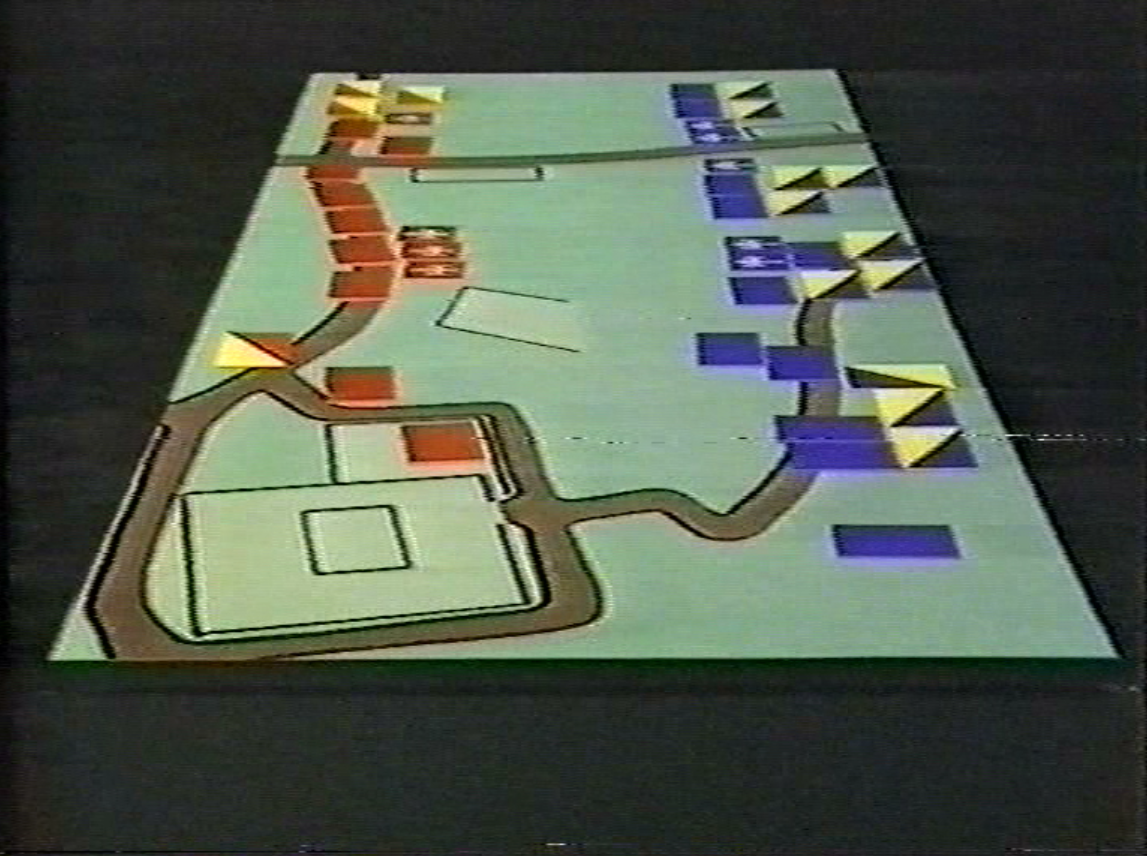 This is followed by an aerial view onto a simple schematic plan of the battleground itself, as delineated by the game, with those familiar symbols for infantry, cavalry and artillery. One side is shown in red, one in blue, appropriately enough in this case, as those were the dominant national jacket colours of the British and French troops in this era. I think they stick to this colour formula in most if not all the episodes.

Above we have the British and their allies at left, between the road to La Haye Sainte (top), and the Hougoumont manor house and farm complex (bottom), facing the French at right. The British have considerably less cavalry, and what they have is on the wings, whereas the French cavalry are held in a second line, like a reserve. Both sides mass their guns centrally.

Woodward relates how Boney left things too late on the day (although he doesn't mention the poor weather that was the reason), and how he effectively played into Wellington's hands, by following a tactical line Nosey had anticipated, and on ground of the latter's choosing. Woodward does mention the role of the Prussians, upon whom Wellington's decision to stand and fight at Mont St. Jean depended, but they have no part in this re-fight!
What would Wellington have made of the way this game is set up and pursued, in excluding the Prussians? Even now, 200 years after the battle, there's a legacy of confusion and even controversy around the Prussian arrival at Waterloo. There's a potential irony here, in that Wellington so successfully spun his version of Waterloo - even to the extent that historian and diorama builder Capt. Siborne felt obliged to remove thousands of miniature Prussians from his large model - that he also succeeds in removing them from the British consciousness with, in this instance, disastrous results! 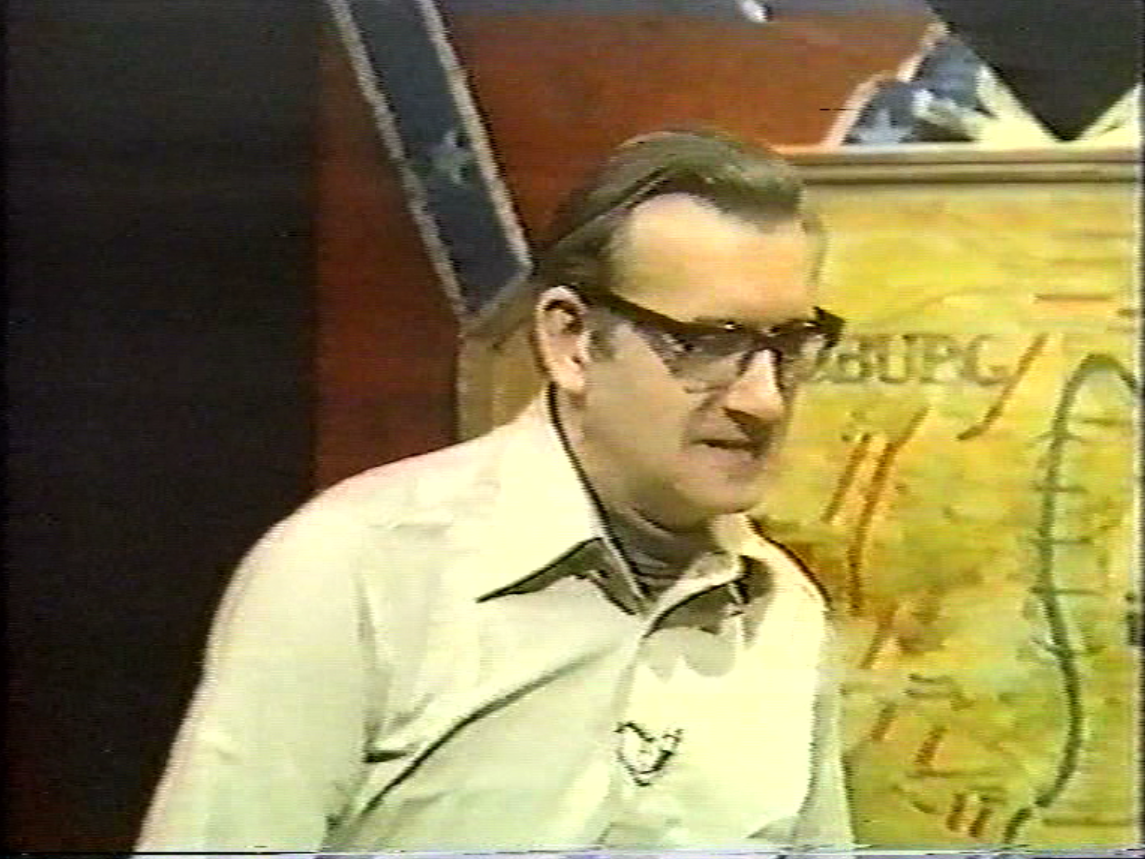 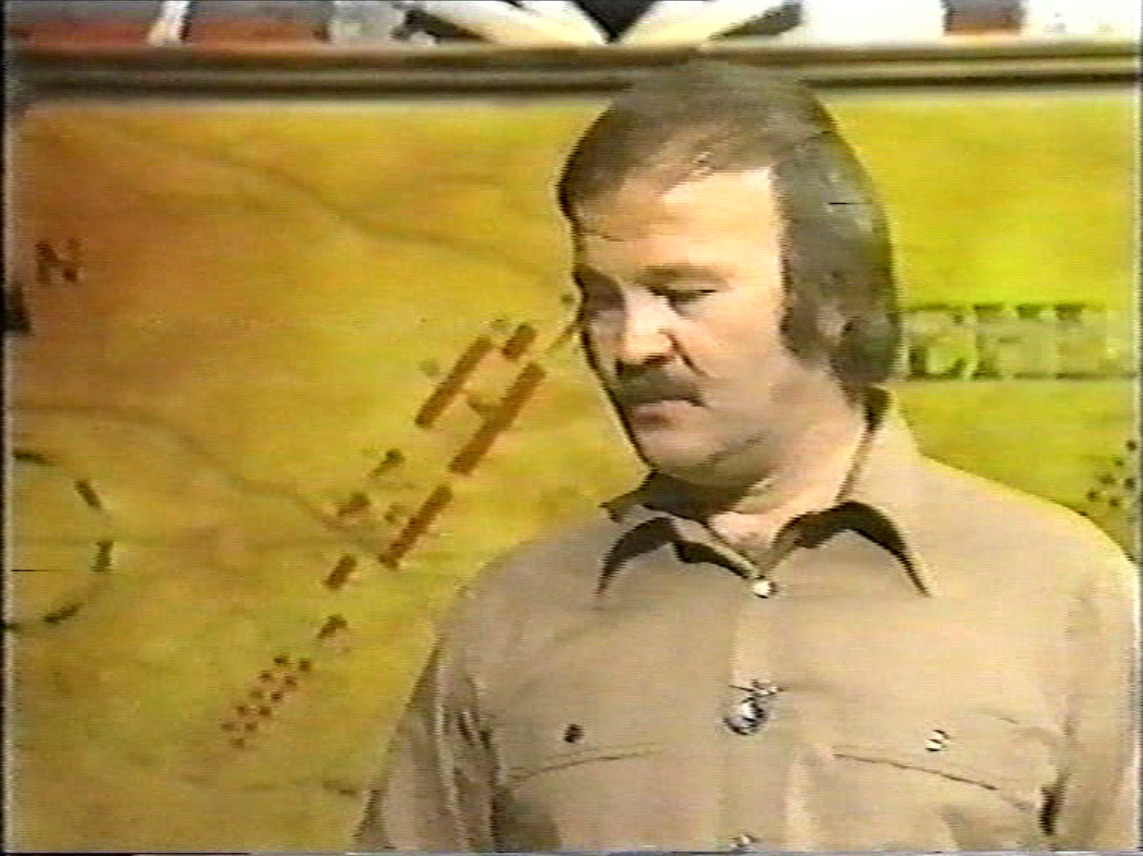 The players are John Braithwaite, 'managing director of a firm which designs and makes models' and - if UK wargaming has such a thing as an iconic or legendary figure, then he's probably it - Peter Gilder, 'freelance designer of models.' 'In fact' continues the former Sgt. Howie 'most of the models in the series are his.'

Whilst Gilder would become the better known of the two, thanks to the ubiquity of his figures in issues of Miniature Wargames, and his legendary 'Wargames Holiday Centre', Braithwaite was also very much a big gun in the world of little guns, being one of the key people behind Garrison Miniatures, or Greenwood & Ball.

So, Both Gilder and Braithwaite designed and sculpted figures, and can claim to be movers and shakers in the evolution of the hobby, especially here in the UK. 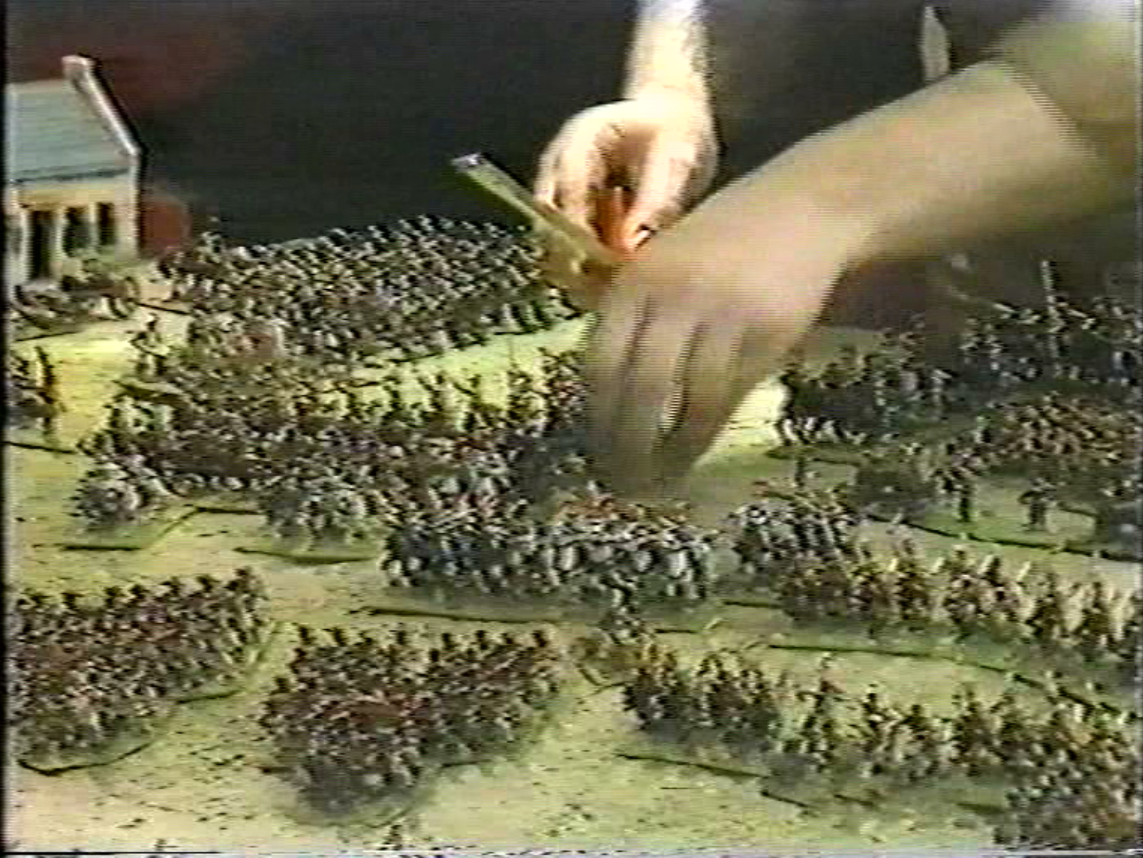 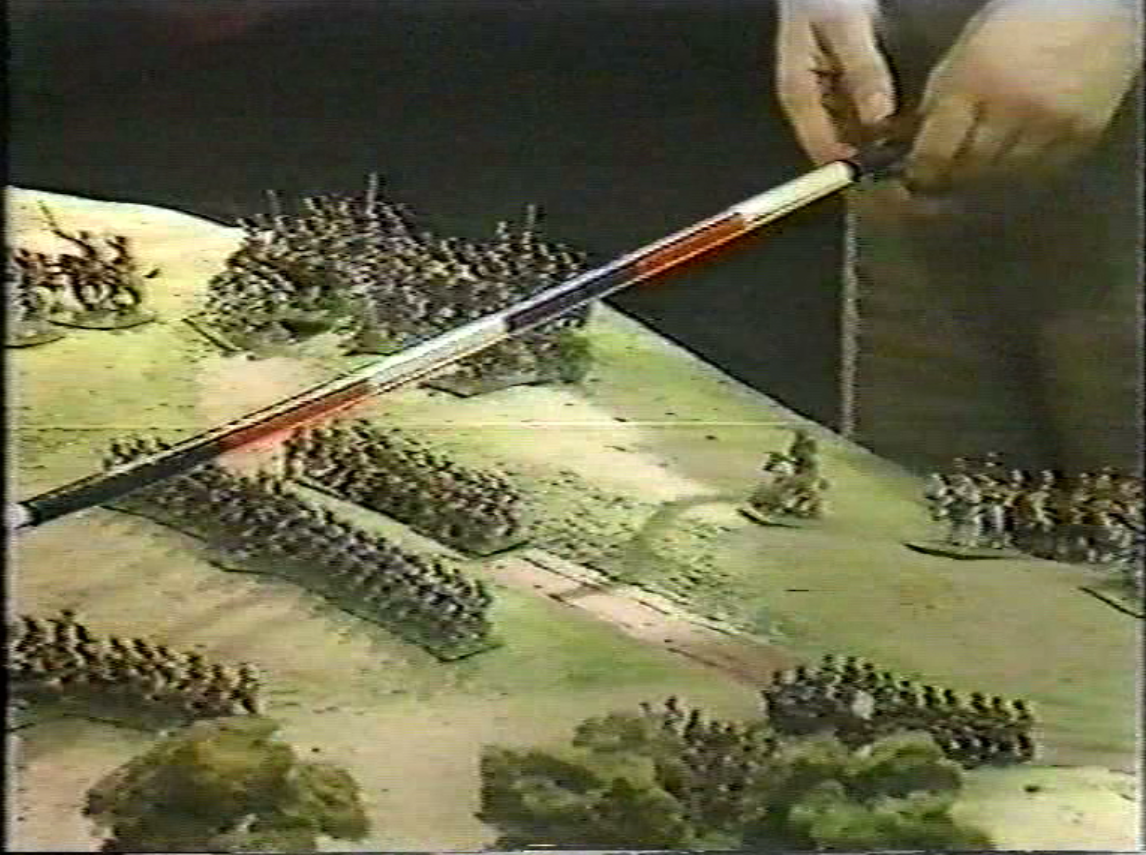 Gilder holding his artillery-range stick at an unfortunate angle! What is he measuring? EW: 'These are two old friends, and foes, a little unhinged when together'. 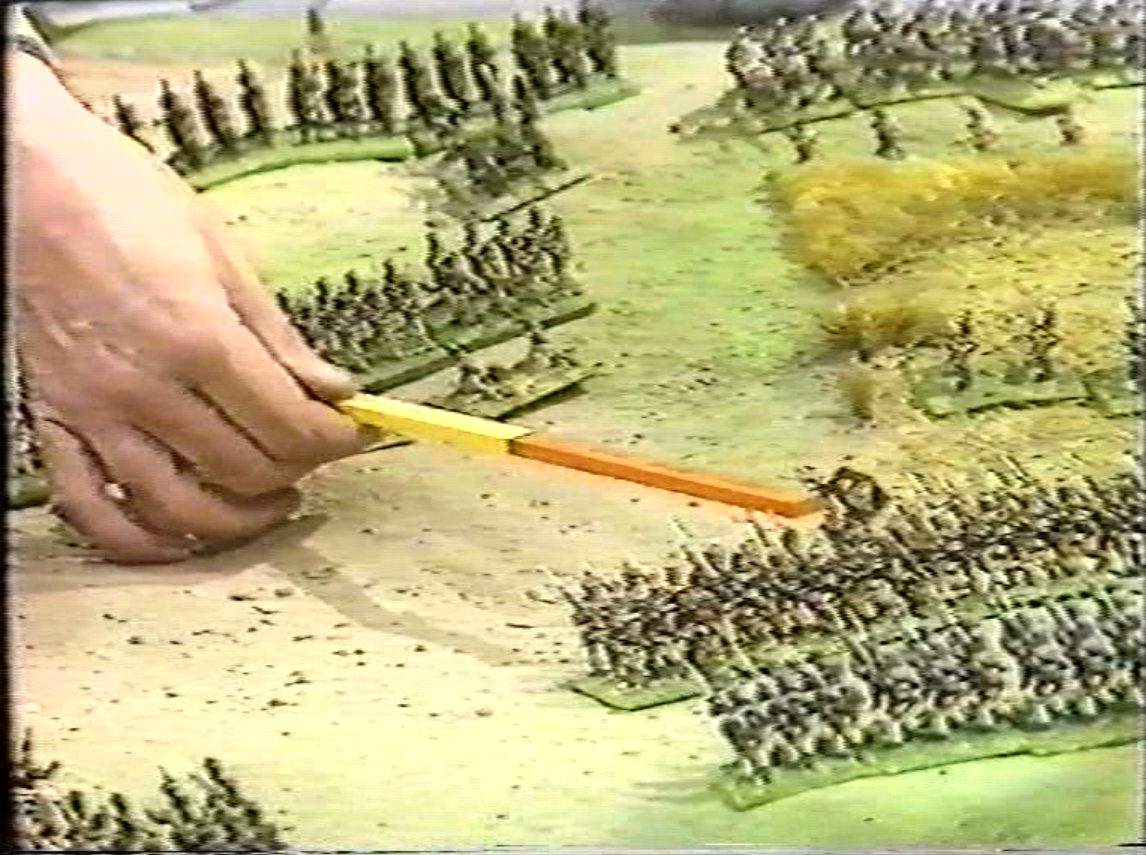 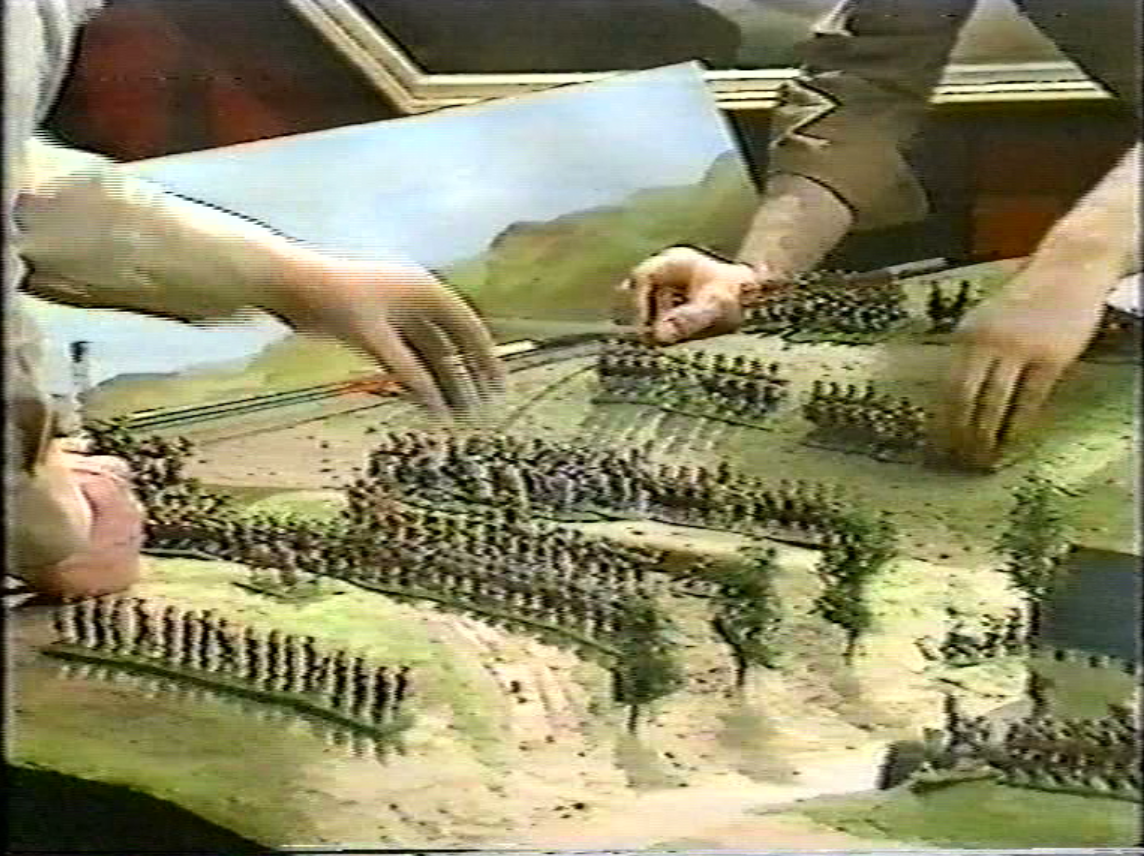 A cavalry melée develops on the British left/French right. JB: 'It's like a dowsing stick' quips Braithwaite, travelling back and forth through time to nick a joke from my previous Battleground post! 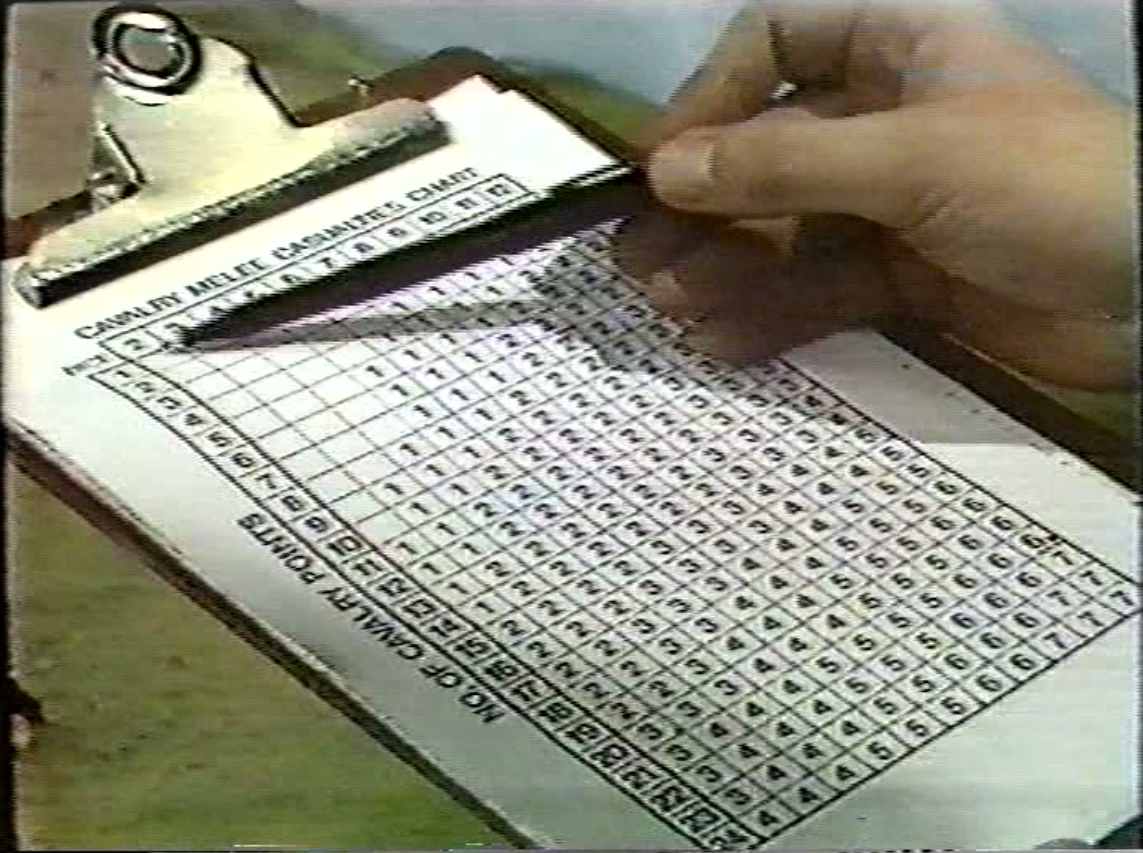 Gilder reminds me a little, both in looks and vocal manner, of a more relaxed version of moustachioed Det. Inspector Derek Grim (David Haig), from the BBC sitcom The Thin Blue Line. Braithwaite and Gilder are several notches higher up the TV-friendly charisma ladder than most of the players in the series (or at least those episodes I've seen), but there's still a slight shade of the nerdy 'you don't want to do it like that' character about them. 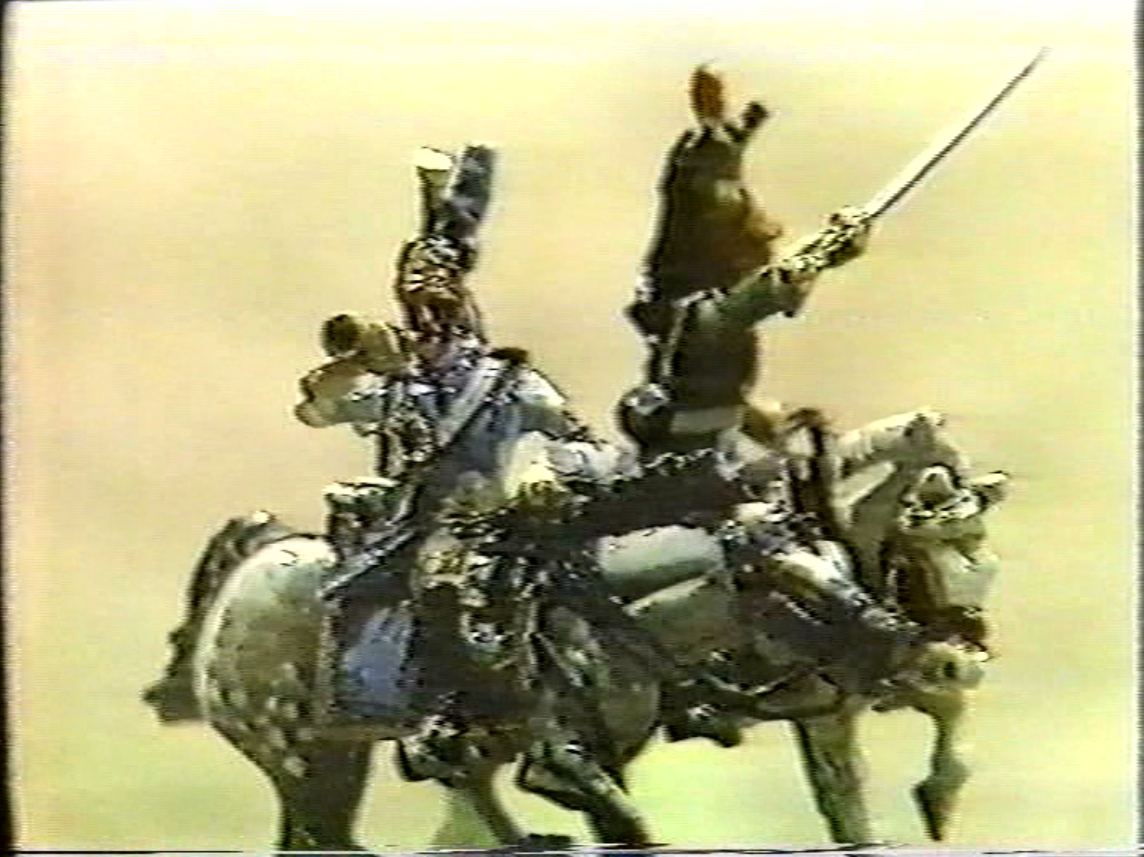 Some of Gilder's legendary Napoleonic eye-candy. 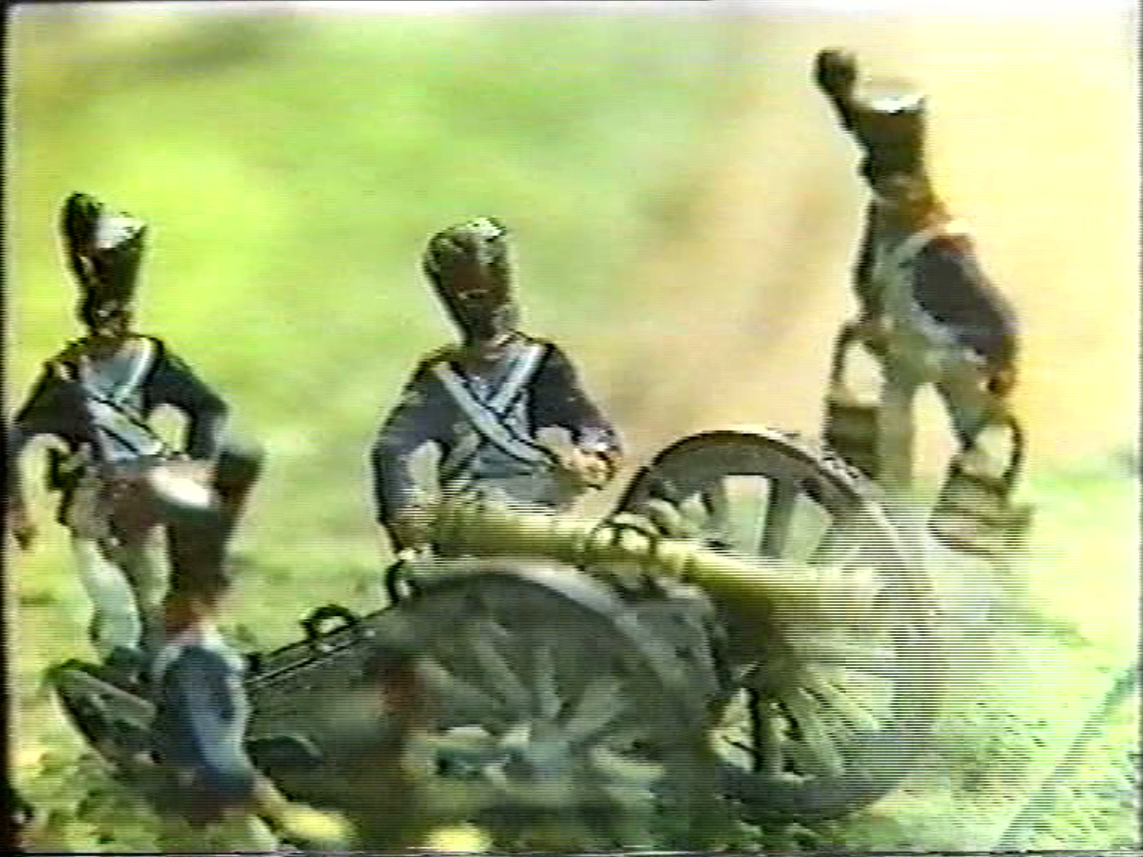 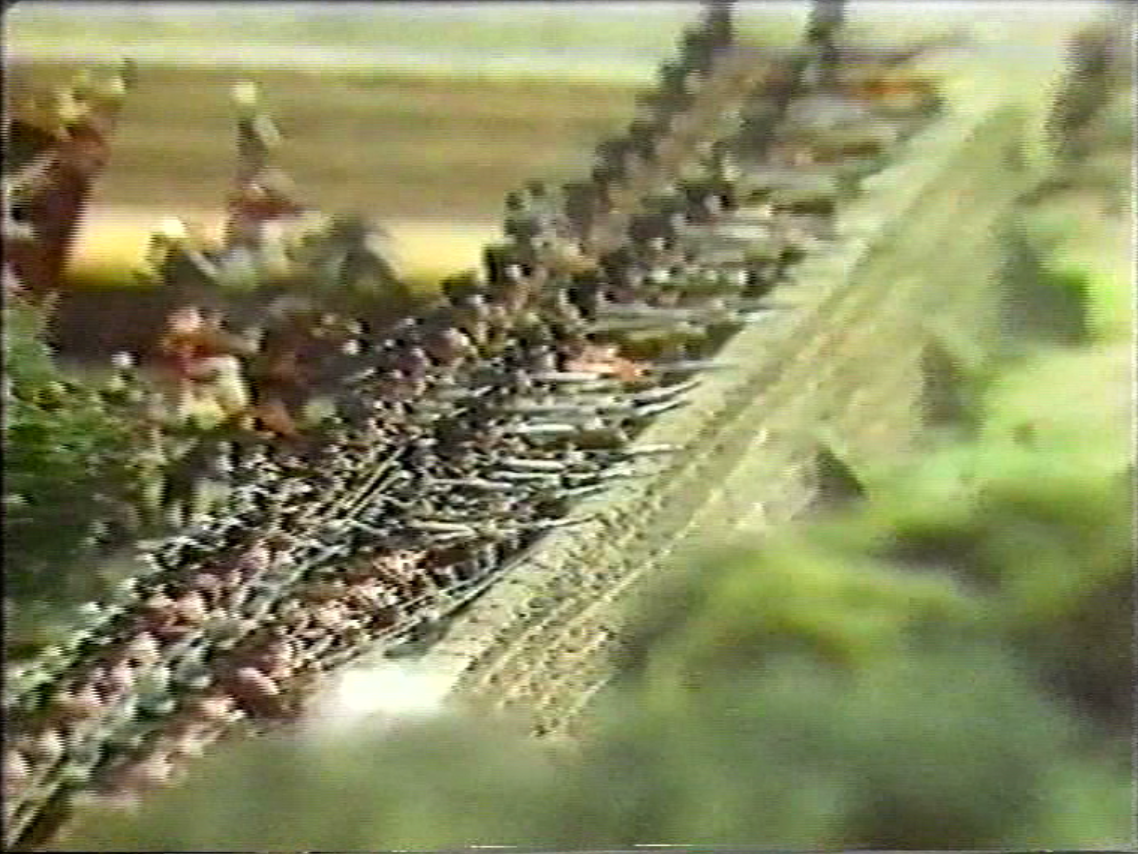 Each episode has, as did the Callan movie (which had the players re-fighting Gettysburg, and possibly also another battle I can't recall), numerous segments in which there are close-ups of the figures, along with battle sound-effects, martial music, and even the use of smoke. As the Battle article points out, a lot of time went into putting the programme together - 5 months in fact - Terry Wise even claiming that the equivalent amount of effort went into this as would go into a drama series! 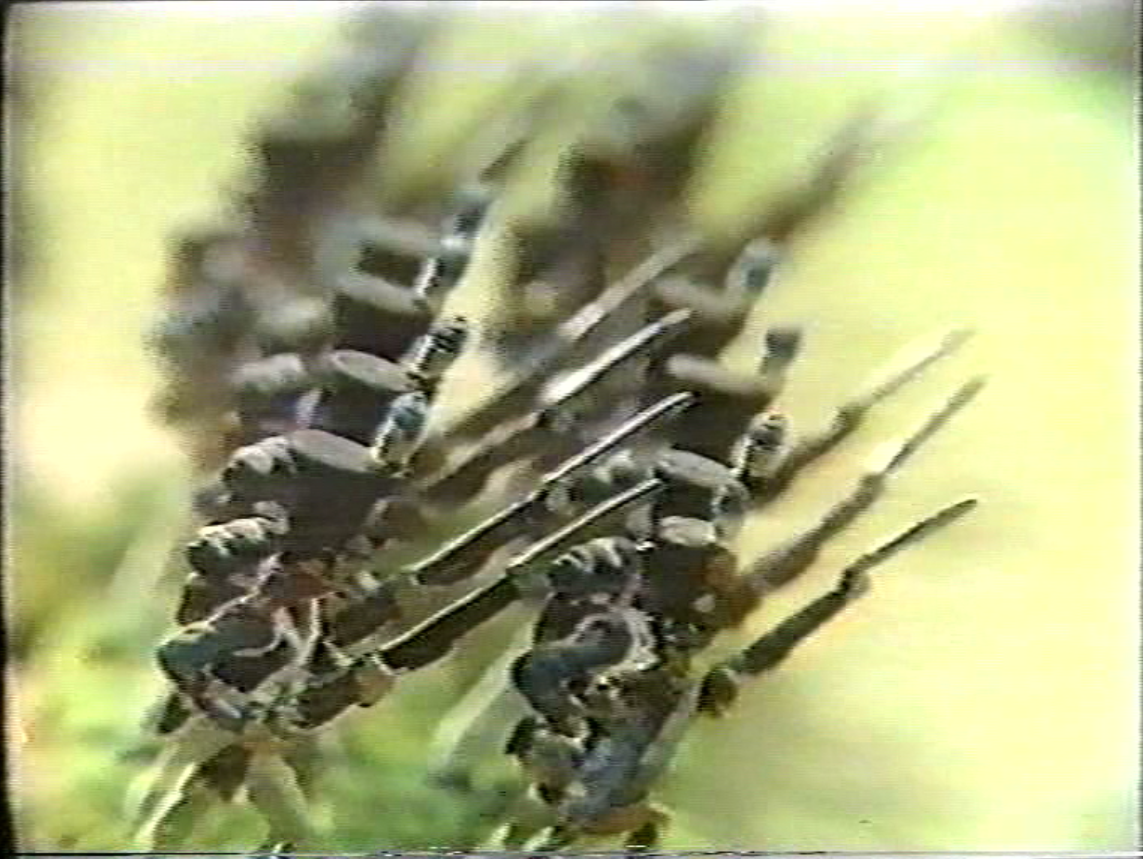 This next trio of images sum up the latter half of the game: domineering Frenchies and downtrodden Brits. 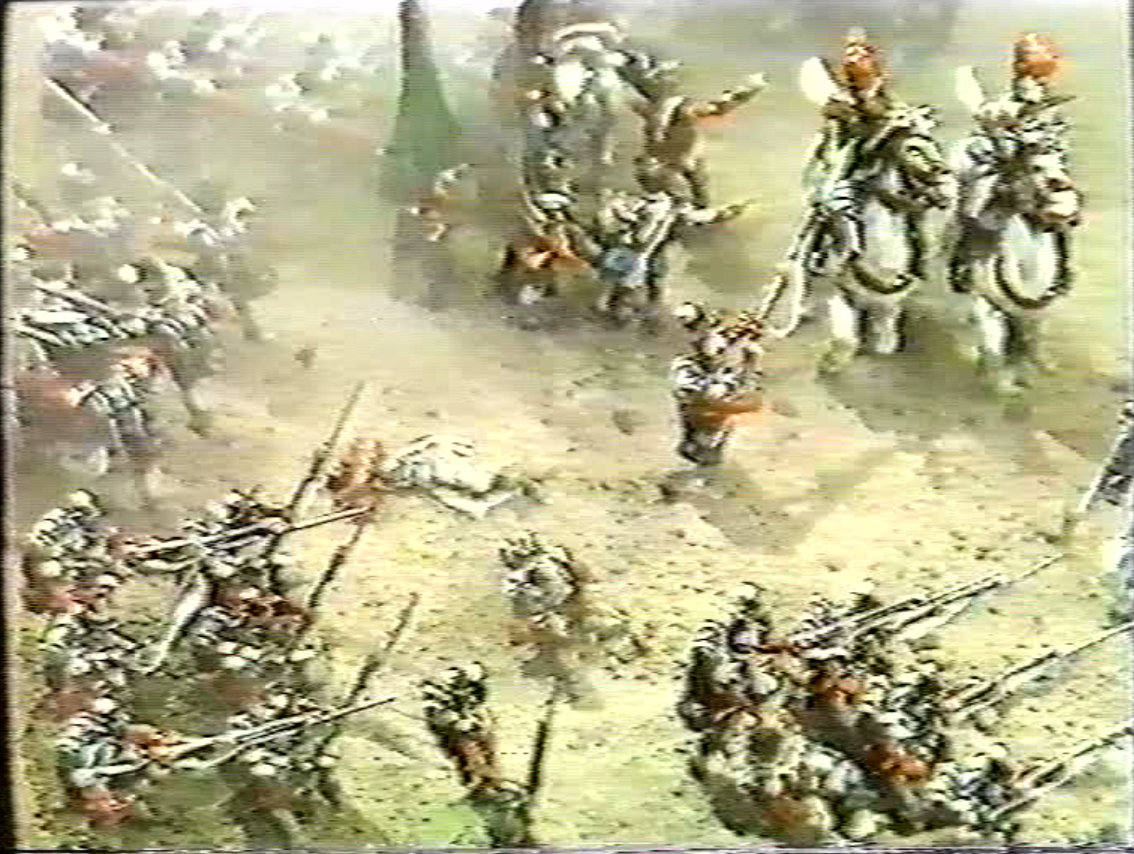 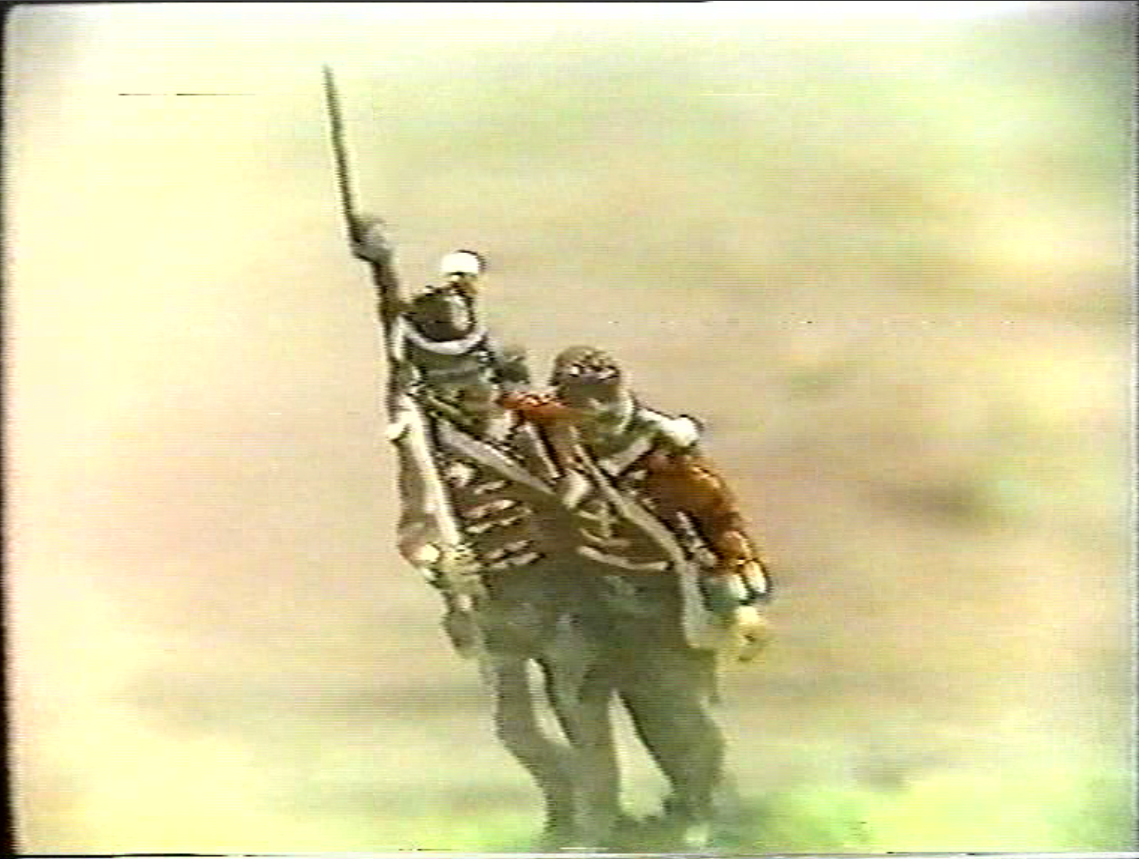 Some of the interpersonal dynamics I remember from my youthful wargaming days - the assumption of dominance, at least verbally, by one player; gentle cajolery or ribbing by both; jokes cracked (noticed and unnoticed) - can be observed at play, the 'alpha male' typically bantering their way into a commanding role.

In this televised instance of such a scenario, Gilder talks himself up quite a bit, whilst Braithwaite continually makes gentle jokes throughout. Not only does Gilder assume the dominant role as a player, but, despite Braithwaite's resolve to remain stoically humourous, he also has the last laugh in his role as Napoleon. 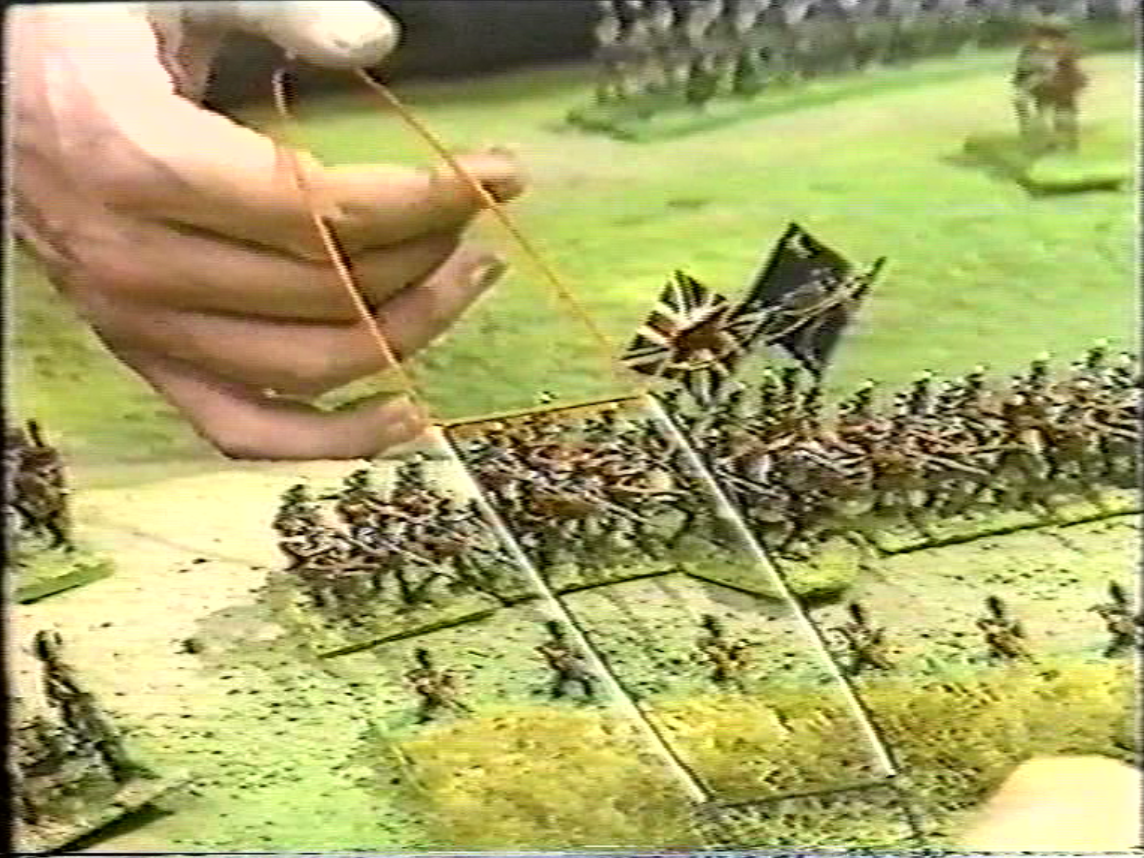 This sequence of pics covers the period when Gilder's artillery decimate Braithwaite's squares, before the French cavalry move in to mop up. 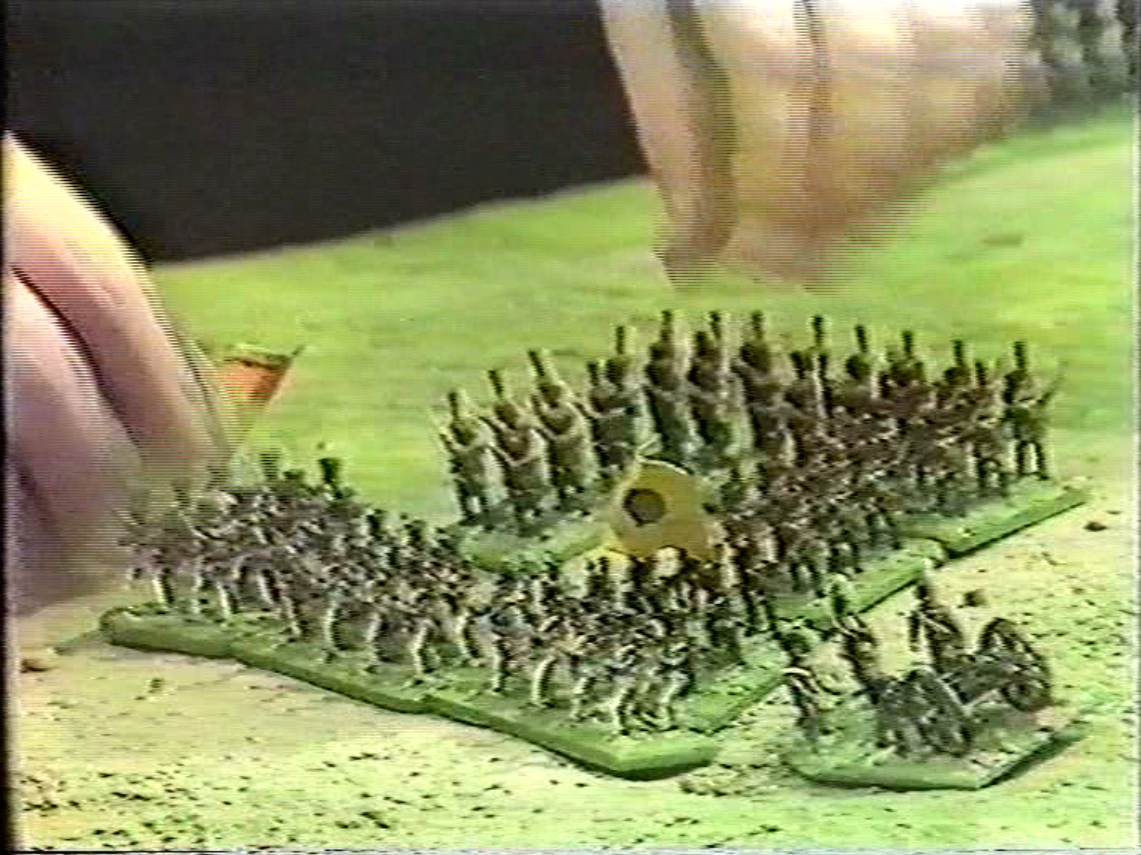 As he is forced to remove stand after stand of figures, Braithwaite starts to regret forming square. One can imagine him thinking, 'Damn, but it worked for Welly!?' 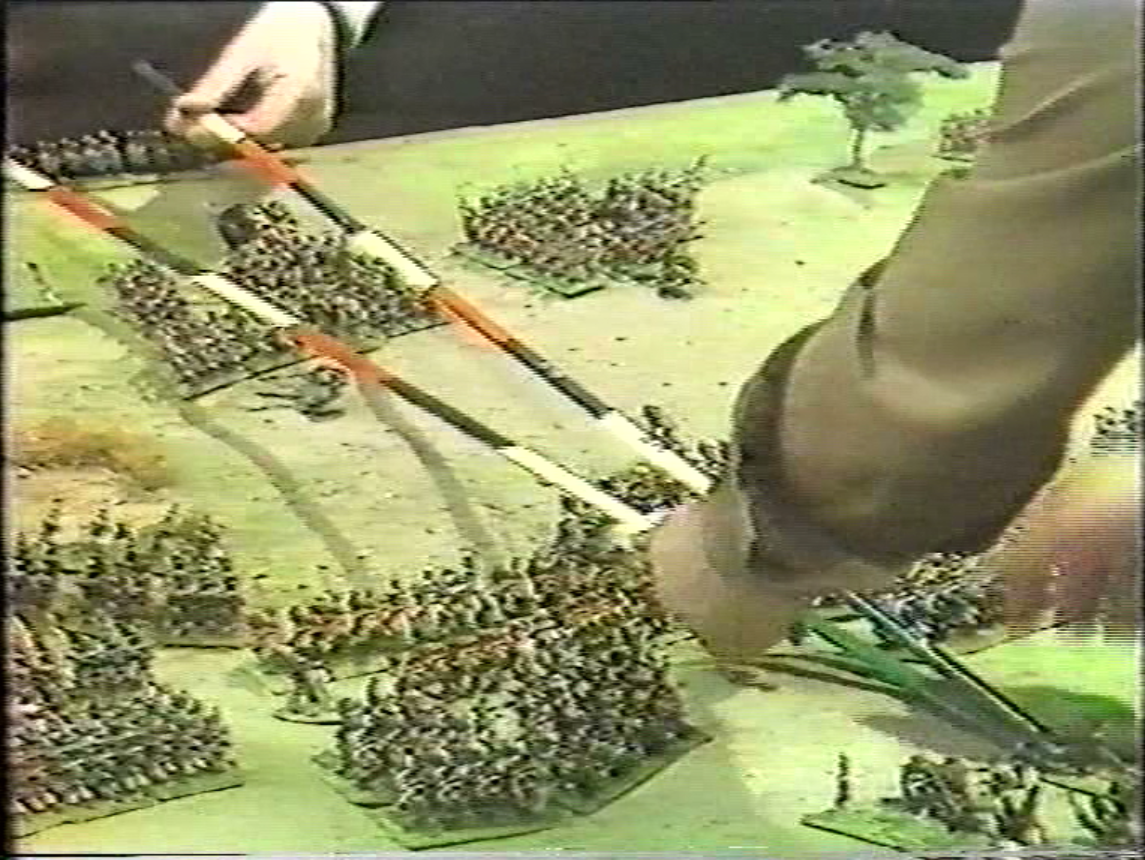 Gilder takes advantage of a dip in the ground to fire over his own advancing troops. 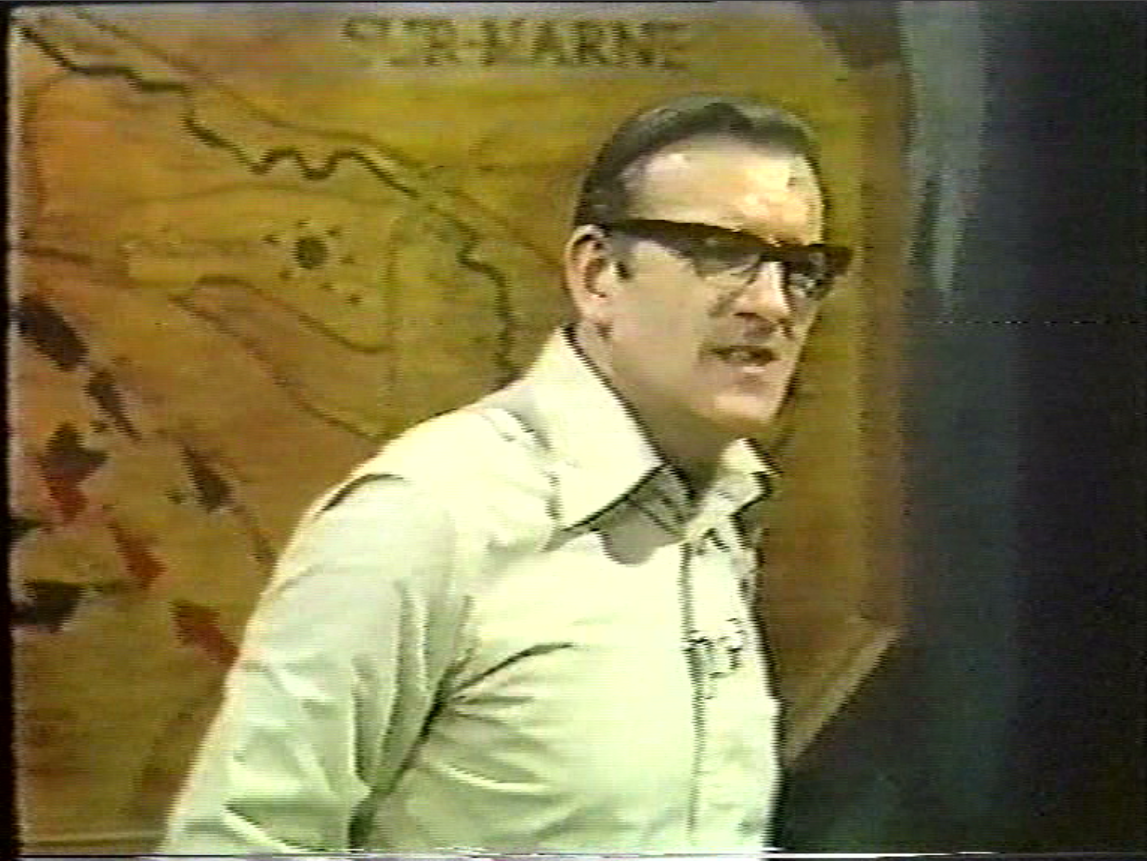 PG: 'Would you like to wave your white handkerchief?' JB: [stoically maintaining his good humour to the end!] 'I've only got a tissue!'

A couple of things I glean from this are that that, first) a commander's personality, as in real war, can be brought to bear in battle, and second) knoweth thee thine rules: I certainly wouldn't want to face as domineering a player as Gilder with any degree of uncertainty! If a player of his ilk catches you on the back foot... well, you'll be steam-rollered.

In this re-fight, some aspects of history are repeated, with British commanders Picton and Uxbridge falling during the battle, whilst others are turned on their head, with Gilder-Napoleon breaking Braithwaite-Wellington's centre. 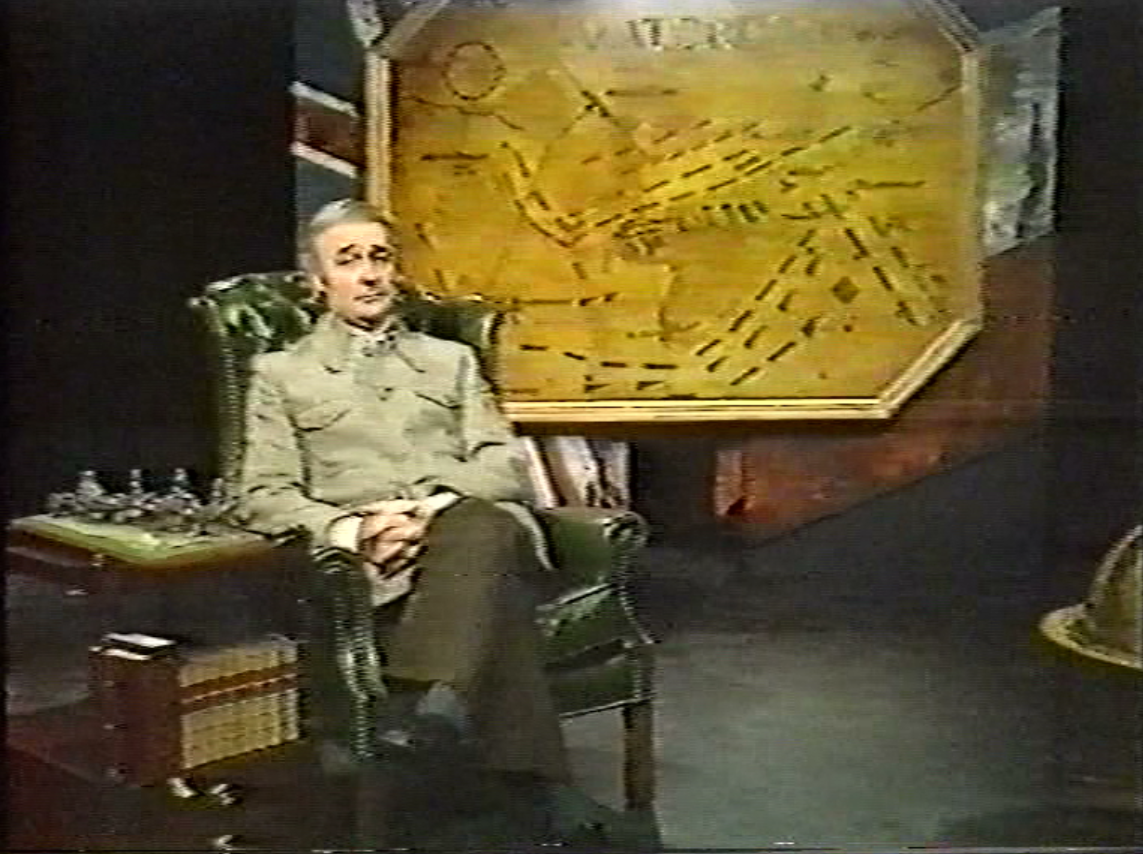 Looking suitably dour, EW says rather dolefully 'So, the British could easily have lost at Waterloo, in 1815'.

It came perilously close to this on the day of the real battle, of course. But the 'Prooshians' came to the rescue. Unfortunately for Braithwaite there were no 'Men in Black' on this day in an imaginary 1815.

Now, I'm certainly not saying, by any means, that Gilder cheated - as Woodward notes, 'Peter took no chances, he hit John's centre hard' - and certainly the dice rolled in his favour too, but... Well, sheer bluff and bravado might have, on this occasion, as undoubtedly they sometimes do in real life, have helped carry the day! The 'historical consultants' get their credit as Hougoumont burns at the end of a rather different Waterloo.

The episode closes with Woodward saying 'I'll see you next week, this time on the Nile.' Sadly, however, this next episode is one of the two that were, so I've heard, lost in a fire at the storage facility where the film archives were stored.

So, for our next episode we'll be skipping ahead an episode, whilst travelling further back in time, : Châlons sur Marne, 451 AD. I hope to see you there! 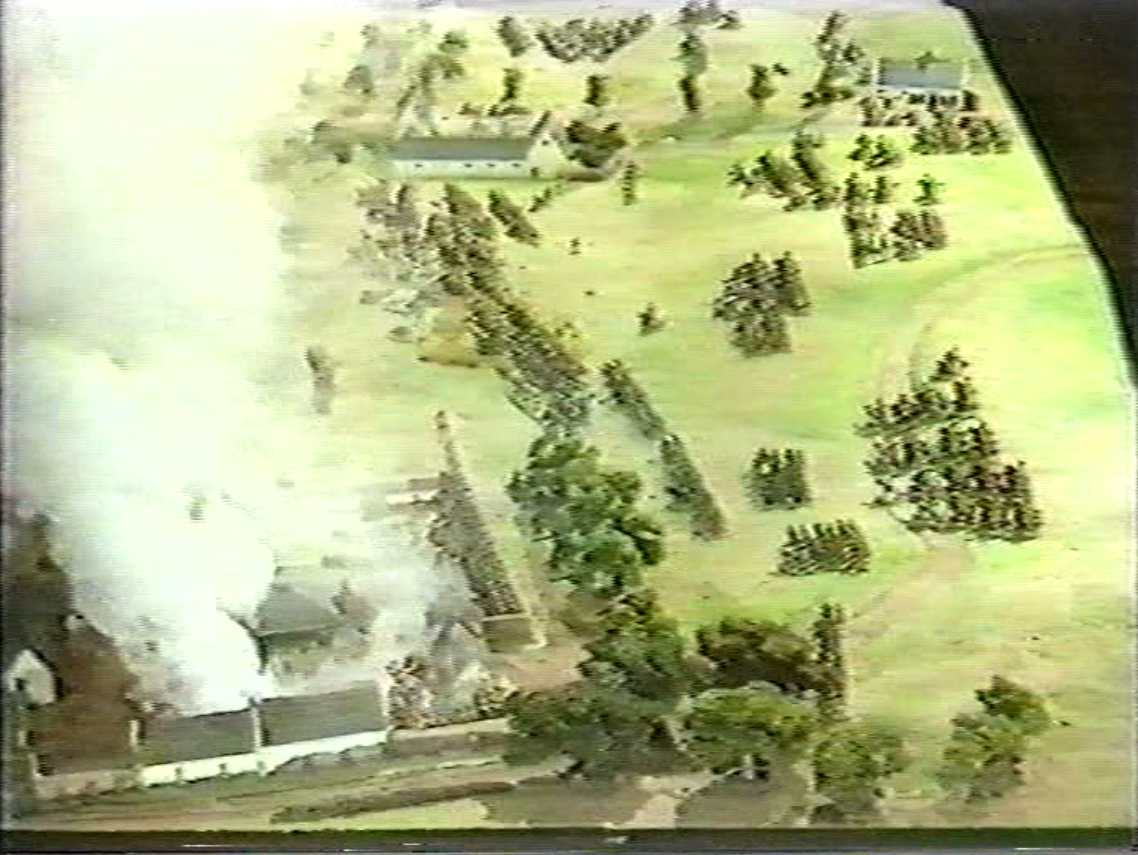