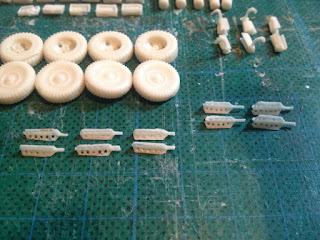 My erdpfahl. Far from perfect, but passable... I hope?

I'm kind of getting ahead of myself here, starting with the above image of numerous erdpfahl, or stakes, and other bits and bobs. But they are the item I first had a yen to scratch-built and cast in resin, thereby launching this whole moulding and casting saga.

I did a lot of mould-making and quite a bit of casting after the episodes I've blogged already. And I'm not showing all of them. One thing I did was cut the big mould which contained ammo boxes and shells down into two smaller moulds. And in turn I then further cut these moulds in two, adding more pouring and venting channels. The improved results, pictured below, show that this was a better idea than simply chucking the mould out. 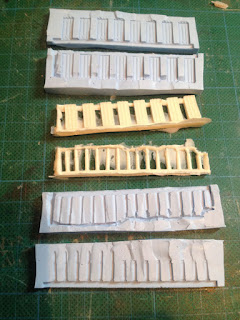 Much better results from modified moulds. 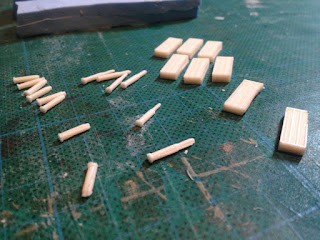 The largest group, at the top, are best.
In the image above, I've cleaned up the castings from the modified moulds, and 75% or thereabouts are great. There's one iffy one, and one outright dodgy/unusable one per item: spent shell, live round, and ammo box.
Next up I decided to revisit copying some wheels. But this time in sets of four, and with properly laid out pouring and venting channels. Would this extra effort produce better results? Indeed, would it yield usable items? 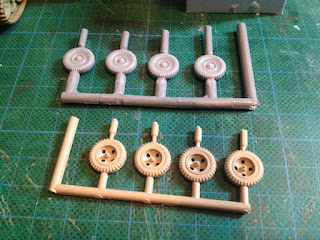 Sets of better prepared wheels, ready to be moulded. 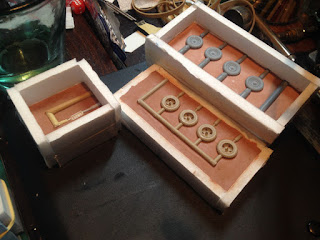 Wheel moulds in progress, plus another single erdpfahl mould.
Once all the new moulds were made I get the whole lot ready for a potential complete casting session (not, alas, of the Hollywood starlet variety). And here they all are. A good little set, quantity wise, even if not quality wise. One issue however, is that the resin I'm using cures so quickly I can't really cast a whole set as big as this lot. If I try to, the resin is already going off before I've done all the pouring. 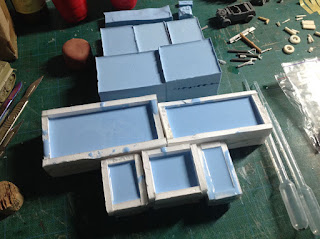 Before I move on to the final chapter in this saga, for the time being at least. Here are a couple of pics of some of the multiple little gubbins that I made for the 88s, this time cast in several sub-sets, as opposed to the over-filled single mould attempt I made earlier on. As can be seen in the upper of the two images below, I usually try and do a few other little moulds as well, to use up all the resin I've mixed. 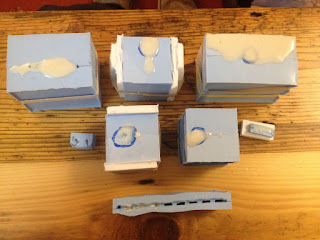 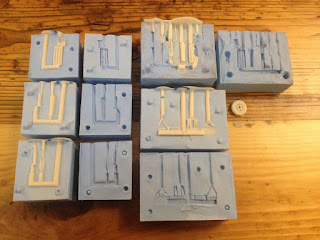 The results of splitting stuff up speak for themselves, I think
As the lower pic above shows, pretty clearly, breaking the over-filled mould grouping into smaller sub-sets paid off. Air flows far more freely through the admittedly still tiny passages, and the items are, as a result, far more likely to cast properly. The wheel on its own and a tiny erdpfahl, nigh on invisible below the wheel, were the only successes out of the several other smaller moulds in the upper of the two pics above.
After the steps shown just above, I moved on to a more mass production casting stage, and the results are shown immediately below. Including one set each of the new tyre casts. The latter aren't perfect. But I think they are usable. I'll be doing this with a few wheel sets. Primarily on account of Chester, our new cat/kitten, waging a pretty successful war on my mini-Wehrmacht forces. I have artillery, cars, trucks and even tanks needing various bits - mostly wheels - replacing. I had to move my whole modelling workspace upstairs out of the lounge on his account. The little devil! 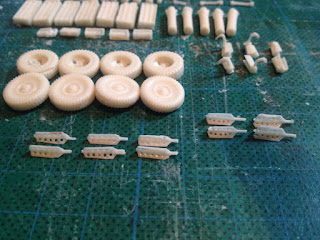 Once I got a stockpile going, I started to feel reasonably pleased. 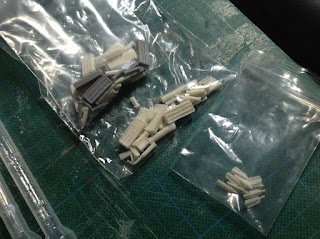 Bagged up, sorted into groups for specific jobs.
And so it finally came time to add some of this stuff to a few of the models for which they've been produced. The moment of truth, I suppose! I started with the Hasegawa 88s, both of which needed erdpfahl, linkages, and handles. I've done one as if just deployed, before being staked, and the other with the stakes going through the arms/legs, whatever they are, ready to fire. 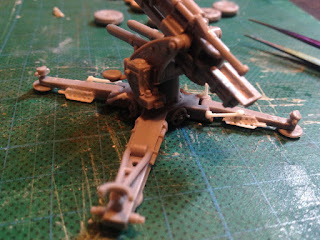 A Hasegawa 88with added stakes (stowed), linkages and handles. 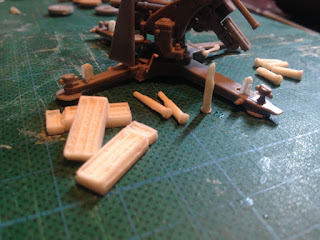 Stakes deployed, and ammo and boxes added to the scene. 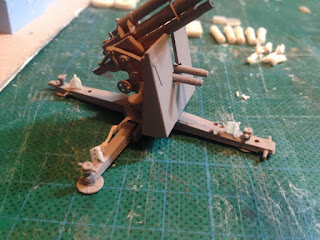 This is the Airfix 88, with stakes deployed, linkages, and (not visible) handles. 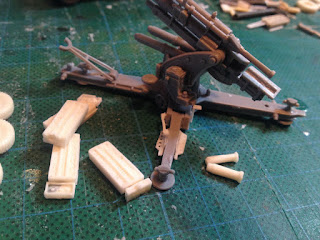 Another view of an Hasegawa 88, with stowed stakes, plus ammo stuff.
I've gone to great effort, considerable expense, and produced some not too great parts, that most folk probably won't even notice. Yay! That's the life for me. And, I think, quite typical model-making behavious, from what I see elsewhere. But I've had a lot of fun, and learned a fair bit. I think for my next attempts at mechanical reproduction, I'll try another and much cheaper technique. But before I get to that point, I think I need to paint these 88mm guns. And perhaps even base them?