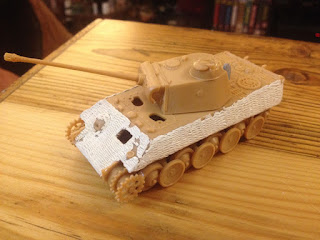 White Milliput zimmerit goes on to the hull.

On this second build of an Airfix 1/76 Panther I haven't bothered detailing the box contents or initial build. Instead I've just jumped in at the point where things get more interesting (to me, at any rate!), with detailing the kit. This is part of a current series of 'panzer wrecks' for the battlefields of my putative 20mm WWII wargaming collection. 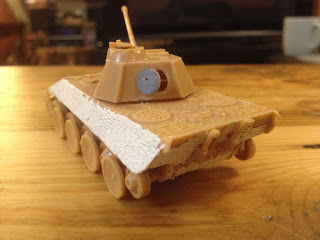 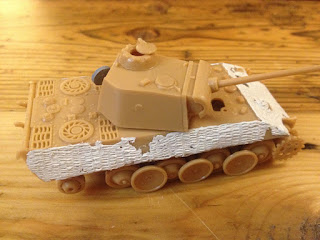 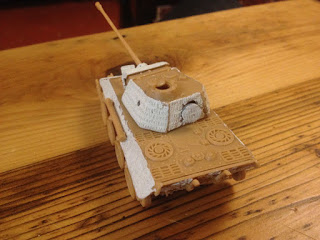 Zimmerit on the turret as well.
After applying the white Milliput zimmerit to the major areas, I decided to detail a number of other aspects of the kit. Mostly this meant opening a number of hatches; in addition to the easy commander's cupola hatch. In fact nearly all the crew hatches are open. I suspect they all baled out - and sharp-ish, as they haven't destroyed the tank, as per reg's - after hitting a mine and coming under fire once immobilised. The driver's vision hatch and the rear turret hatch (is this the 'loader's hatch'?) both required rather more effort! But I think the results are worth it. 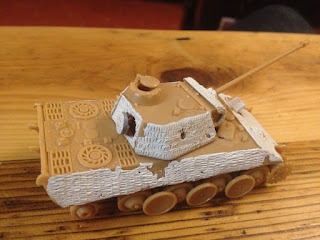 Both main turret hatches are open. 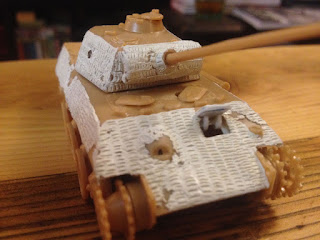 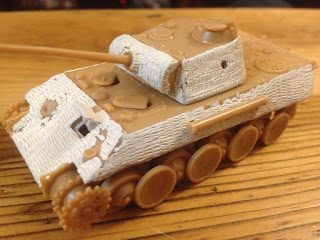 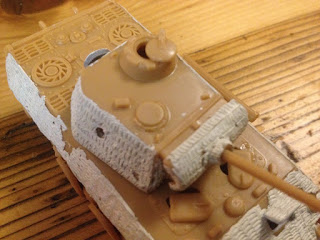 Zooming in on the turret a bit. 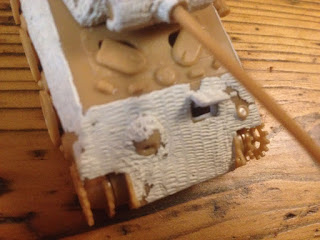 Hull glacis up close.
Keen observers might spot that the turret and hull zimm' patterns are different. I've seen this often enough on photos of actual WWII German tanks. But I didn't follow specific reference. I also removed the turret lifting eyes and replaced them with bent stretched sprue, which I think looks a helluva lot better. In addition I scratch-built towing clevises (clevii???), a tow-cable, and added some tools and spare track. 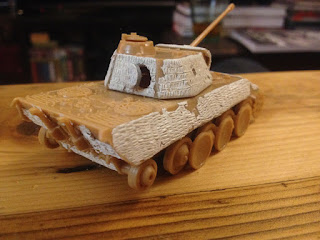 Note missing rear road wheel.
I've scored the kit itself just two and a half 'kreuz this time. Maybe that's a bit harsh? But it is pretty poor. The tracks, for example, are so bad as to be unusable, f-f-f-frankly. Still, it does make a usable base kit for having fun like this with, albeit in the slightly smaller 1/76 scale, as opposed to my preferred 1/72. 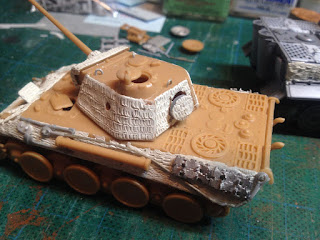 Added details: tools, tow-cable, turret lifting eyes, etc.
Am I therefore wasting my time polishing a turd? Perhaps... I've even ordered several OKB Grigorov 1/72 resin Panther track sets. They look amazing online. I want the tracks on this to look nicer than is possible using the awful rubber band jobs that come with the kit. I also took the trouble to make sure the wheels went on without recourse to the oversized 'cap' type doodads that Airfix supply.
I'm quite keen to add a jack and maybe a bucket at rear. And I may well add the rear stowage bins. Or perhaps jus one? And have the other 'missing in action', with no zimm' where it was... hmmm!?
Posted by Seb Palmer at 21:16