Book Review: The Women Who Flew For Hitler, Clare Mulley 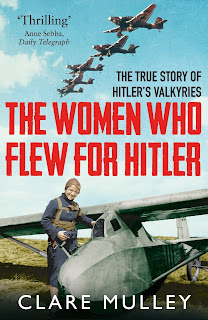 This superb book tells the highly engaging stories of two quite different German female aviators, both of whose youth and professional adult lives were lived out as test pilots under Hitler's Nazi regime.

Both devoted patriots, Hannah Reitsch, the younger of the two, whilst never a party member, was an ardent supporter of Hitler and his whole Third Reich project, albeit in denial re the Holocaust. Melitta von Stauffenberg, a few years older, was, by contrast, of partially Jewish ancestry, and married into the family of aristocrats who famously came closest to assassinating the Führer.

This is an excellently written work, weaving the two ladies' lives - both very exciting, interesting and unusual - into the fabric of truly momentous times. Fascinating, moving, highly informative. Just all round excellent, giving a different and very refreshing perspective on an oft-visited era.
Posted by Seb Palmer at 01:17