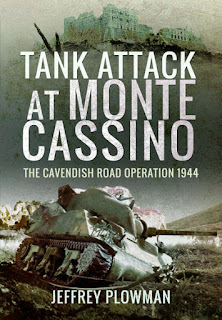 Although my reading has ground almost to a halt recently, I did read this excellent book a few months back. And finally I'm getting round to posting a review!

A fascinating account of a little known action in the long arduous campaign to take Monte Cassino. The somewhat crazy idea of outflanking the dominating heights of Cassino with a tank force - an undertaking which required the building of a road - in terrain highly unsuited to armoured warfare, ended up being something of a shambolic failure.

The attacking force is a mixture of Indians, New Zealanders, Americans and British - French and Poles also figure in the bigger picture! - fighting Germans (Italy having capitulated by this point). The book draws a vivid compelling picture of events, enlivened by firsthand accounts and illustrated with contemporary photos.

A segment at the end covers the battlefield as it is now, for those interested in visiting. I'd have preferred more/better maps, as following the action during the narrative isn't always easy. Several appendices add further supporting info.

All in all, an impressive and fascinating work. I'm left wanting to read more about the whole Cassino campaign. Thoroughly enjoyable!
Posted by Seb Palmer at 00:57