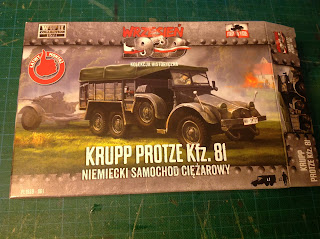 After thoroughly enjoying finishing the ICM Krupp Protze build, started ages ago, but only recently completed, I decided I needed a couple more of this groovy German truck. I ordered two, I don't by (?), and another by Caesar. This is the former. 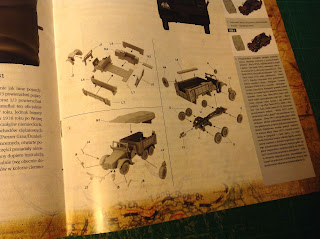 The kit comes with a little full-colour magazine, all in Polish, which includes instructions, and lots more besides. It seems to be part of a 'First To Fight' game system, like a Polish Flames of War, or somesuch. Quite impressive, really. Shame it's not in English as well. 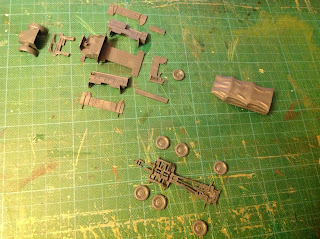 The kit itself is well designed, and goes together well. But it very definitely belongs in the chunky (?) category, of wargaming model, as opposed to finescale stuff like a Dragon, or the ICM version. Despite the overall chunkiness of this model, there are several weak point, such as where the front wheels join the axles, and the headlamp stalks and width indicators attach to the mudguards. 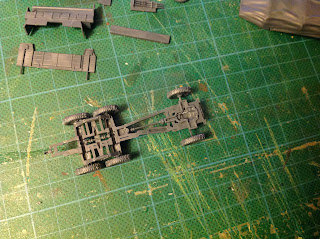 Compared with the superfine ICM chassis detail, this is a one-piece block. But it still looks pretty good. And once the model's assembled, it passes muster in terms of what's visible. A driver figure us included. As is so often the case, its nigh on impossible to actually get him in behind the wheel once the kits assembled. Not sure if I'll use him, or opt to use a different figure. 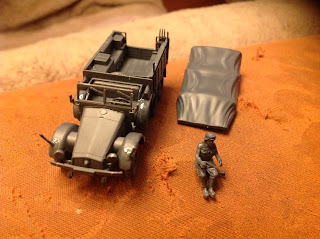 There's also a tarpaulin cover. Again, not sure if I'll use this. But it's good to have. And lo' she be finished, construction wise. Detailing and paint job remain to be done. Quick, easy, and fun. Not a superb kit. But functional and useful. 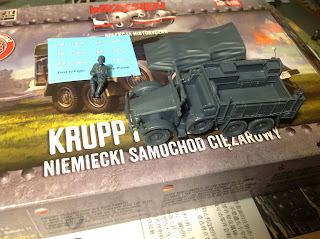