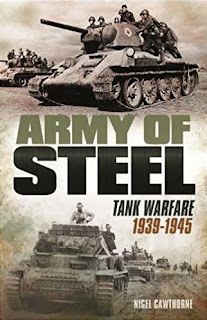 NB: The pictures used to illustrate this post are not from the book under review.

I got this at The Works, for just £2, brand new. RRP was £7.99. At that low a price I thought I might as well take a punt on this. Army of Steel is a small paperback, running to just over 230 pages, and it's a light, easy read. There are a few black and white maps and photos sprinkled throughout, but it's not lavishly illustrated. Subtitled 'Tank Warfare 1939-1945', the focus is primarily on the 'panzers' of the German armed in forces in WWII. 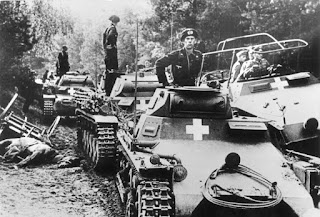 The book starts with a brief and fairly vivid account of the rapid conquest of Poland, before backtracking to look at the rise of tanks as weapons (their role in WWI, Britain/Churchill's championing of them [1], etc.), and their subsequent ascent to a position of central importance in the new 'Blitzkrieg' approach to war, that initially served the Germans so well. The chapter titles convey the arc of the narrative:


1) The Plains of Poland
2) Tanks and Tank Tactics
3) The Making of the Corps
4) Blitzkrieg
5) Into the Desert (This is one of the biggest chapters! Slightly over-represented, perhaps?)
6) Operation Barbarossa
7) Soviet Superiority
8) Tigers in Normandy
9) Last Gasp in the Ardennes
10) Panzer Kaput 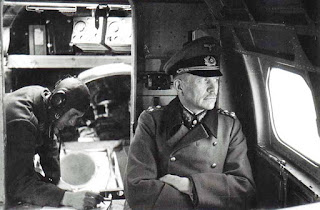 Guderian en route to the Ostfront.

Army of Steel is liberally sprinkled with quotes from a wide variety of sources, ranging from inter-war British theorists (Liddel-Hart, Fuller, Churchill), to Panzer commanders like Rommel and Guderian, right down to crews in the thick of the action (characters like Schmidt and Von Konrad), which definitely make for a more lively engaging account. I've heard it said that Rommel's and Guderian's reputations are over-inflated, the former mostly by admirers (inc. many amongst the Allies), the latter mostly by himself. Certainly this book leans heavily on Guderian, and seems to prortray him quite sympathetically. [2]

This book reminds me of Delderfield's Napoleonic history books, in that it was easy, quick and great fun to read, and not a stodgy academic book attempting to cover all the bases, or trying to come up with some new or unique angle or source (such books are often very good, but often also very long, and frequently quite hard work). I would suggest Army of Steel would make a good intro to the subject of tank warfare, especially as it was in WWII, and in particular from the German perspective. 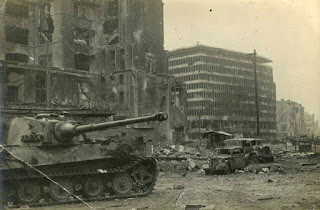 How it ended: a Tiger II, or King Tiger, amidst the ruins of the 1000 year Reich.

What emerges is that, despite Germany's undoubted verve in tank design, the mass-produced standardised tanks of Russia and the U.S. eventually won out by, if nothing else, sheer weight of numbers. Germany's industry, including her access to raw materials, and her tendency to proliferate and over-engineer, all spelled doom in the long term. 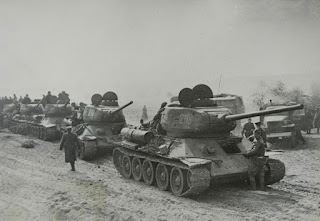 T-34s on the Eastern Front.

Initially outclassing German panzers when they first met, and continuing to outproduce them throughout the whole war, the T-34, as pictured above, typified the Russian war effort. And as if the 'Red hordes' weren't enough, the Germans had to face U.S. Shermans; another front, another superpower enemy, and another standardised tank in seemingly unlimited numbers. 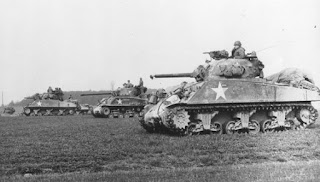 Shermans on the Western Front.


[1] Cawthorne gives the same basic outline as can be found here, at this IWM link, from which I'll quote the following:


"The name 'tank' came from British attempts to ensure the secrecy of the new weapons under the guise of water tanks. During the First World War, Britain began the serious development of the tank. Ironically, the Royal Navy led the way with the First Lord of the Admiralty, Winston Churchill, establishing the Landships Committee in early 1915."

[2] Most of books I've read on the Ostfront quote Guderian, and usually apparently taking him at his own word. I've ordered both his books: Achtung Panzer and Panzer Leader. The former, published before WWII, is cited by Cawthorne as explicitly counselling against war with Russia, a position Guderian maintained he adhered to, right up until Barbarossa began, after which he stoically did his duty, albeit... well, he paints himself as something of a maverick, in his disobedience and openly critical relations with both the high command and Hitler. He was certainly put out to grass on occasion, even if usually called back in. An interesting subject for further reading? 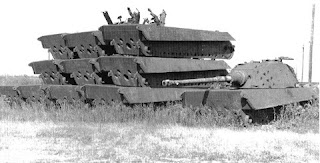 Pictured above and below, unfinished King Tigers. Had Germany been able to build enough of its end of war weaponry, such tanks as these, along with their jets and intercontinental missiles, might well have significantly prolonged the war. The biggest issues, aside from the proliferation of competing designs, were raw materials and production capacity. 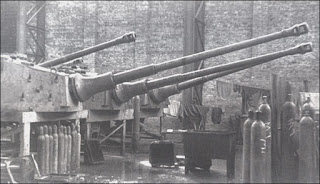