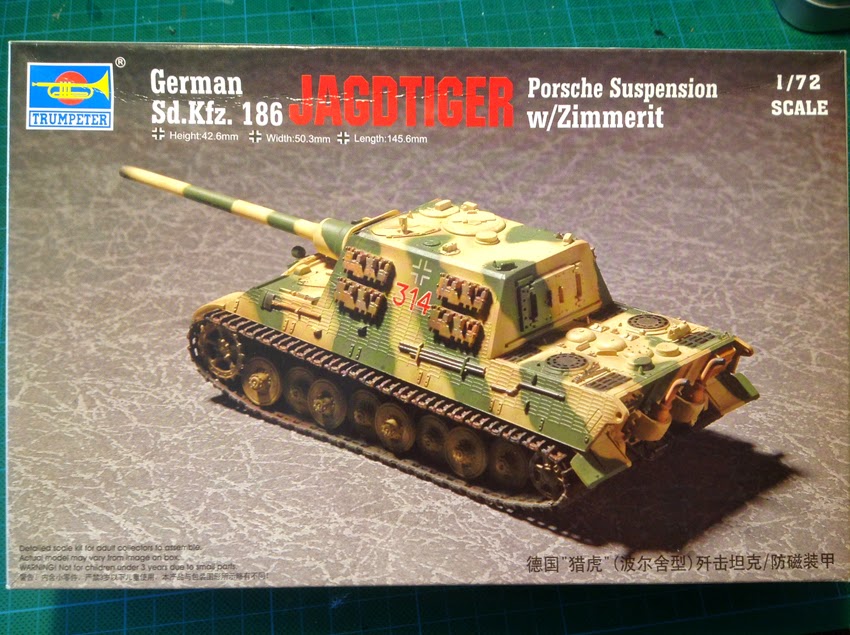 The box: Trumpeter favour photos of the models. A bit boring perhaps, but you do get to see what the kit will actually (or should that be hopefully?) look like.

This, my first Trumpeter model, was a joy to build: beautifully clean parts that fit together really nicely; very little that needs to be cleaned up; and, for the most part, a quick and easy build. I constructed the kit in a few hours, snatched in chunks throughout the the day, about a month ago (on Jan 2nd, to be precise). The quality of the instructions is pretty good as well, even with a few labelling and graphical errors [1], being mostly very straightforward to follow. 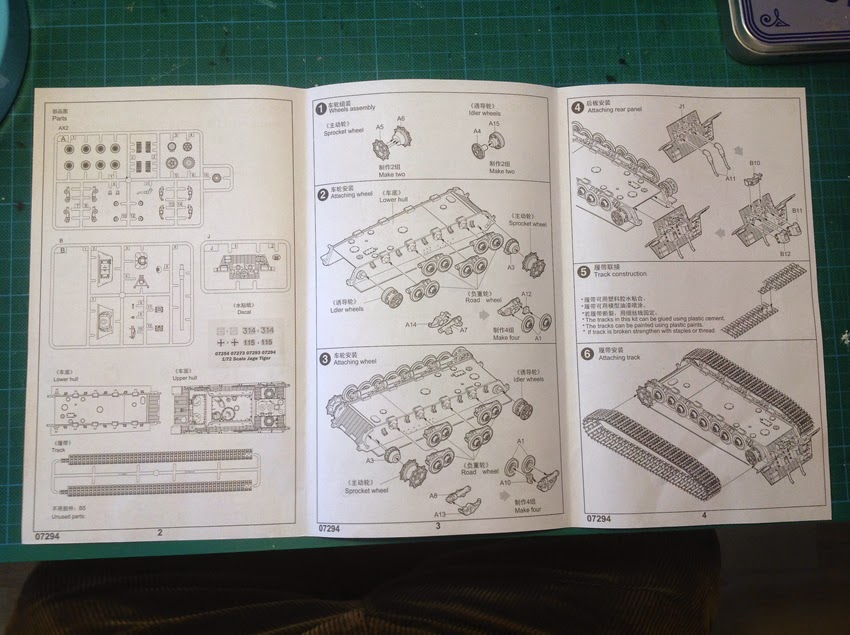 Instructions that are, for the most part, a model (sorry!) of clarity.

I've decided to leave fitting the tracks on this kit until after I've done a certain amount of the bodywork painting, as an experiment. I'll update on this decision and its ramifications as and when I get to that point. I did also plan to try a red oxide undercoat again, instead of black. But in the end it got a plain black undercoat, topped off (for now) with Tamiya's 'dark yellow'. 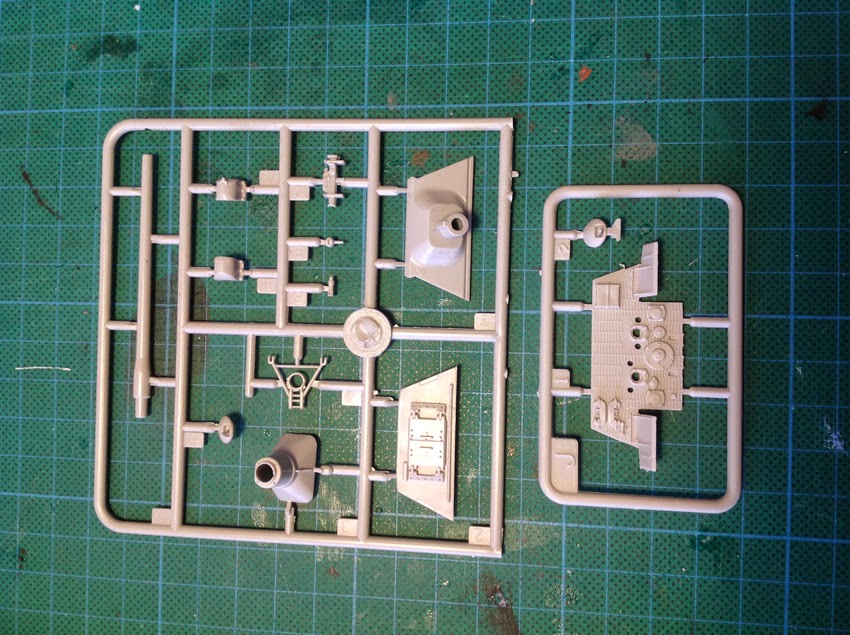 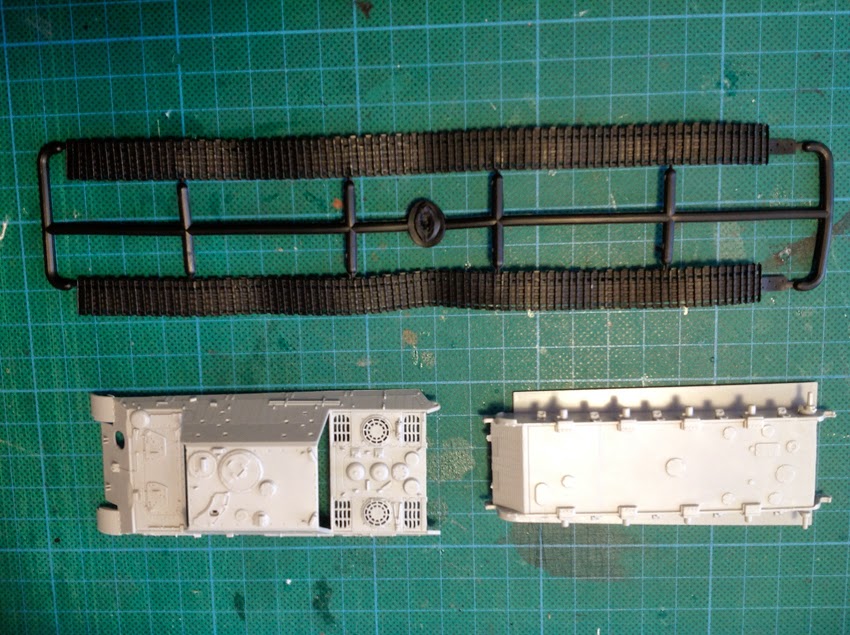 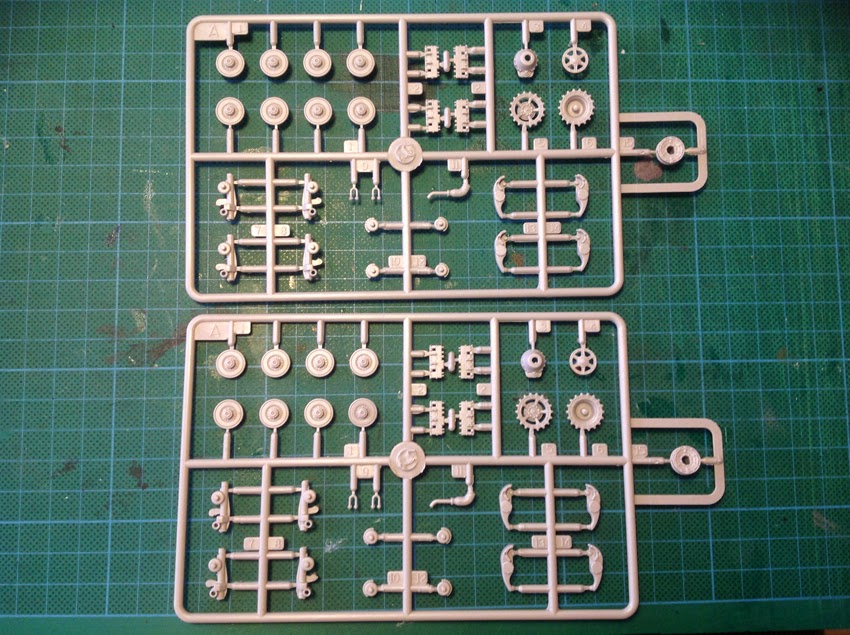 One mistake I made, but was fortunately able to correct, was that I fitted a machine gun and mount - the gun and its dome-like mount are cast as a single piece - without Zimmerit. Two of this part are supplied in the kit, one with the anti-magnetic mine paste, and one without [2]. Having put the non-Zimmerit piece on, I was lucky enough to spot the mistake and remedy it before the solvent had totally sealed the joint.

The Zimmerit on this kit is integral to the moulding of the model, and is both rather uniform and quite subtle, being in very shallow relief. It's probably more true to scale than some other example, but I feel it's too regular, and not quite visible enough at a glance. Perhaps for some things to work when scaled down they need to be a little exaggerated? I'll be intrigued to see how it compares, when the models are finished, with the home-made Milliput Zimmerit on my Fujimi Elefant. The latter isn't the best for all sorts of reasons, but I currently prefer it, because at least it's very obvious! 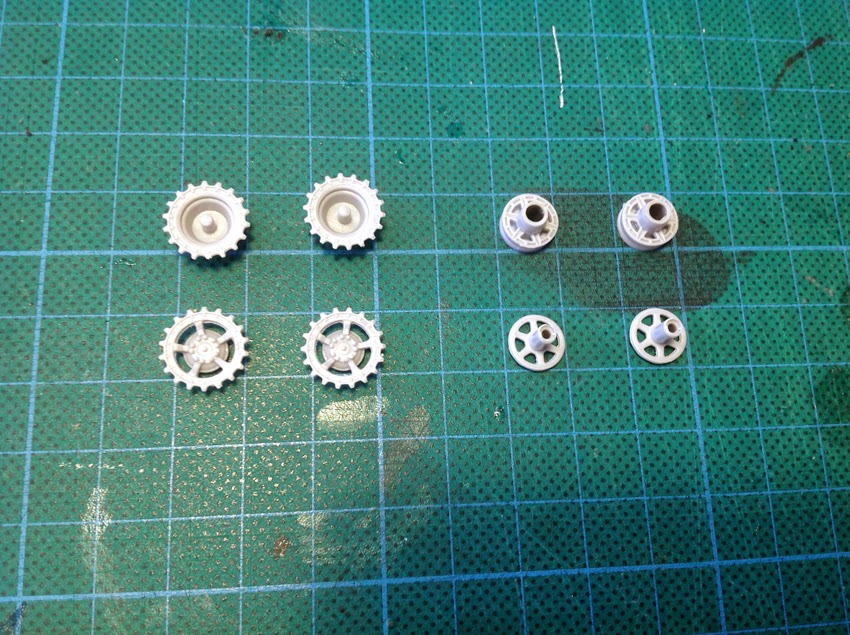 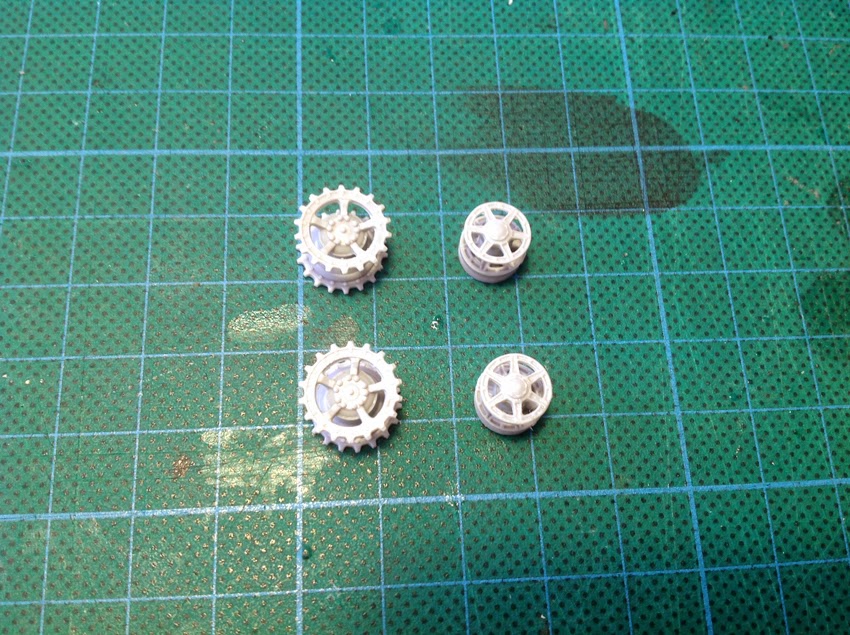 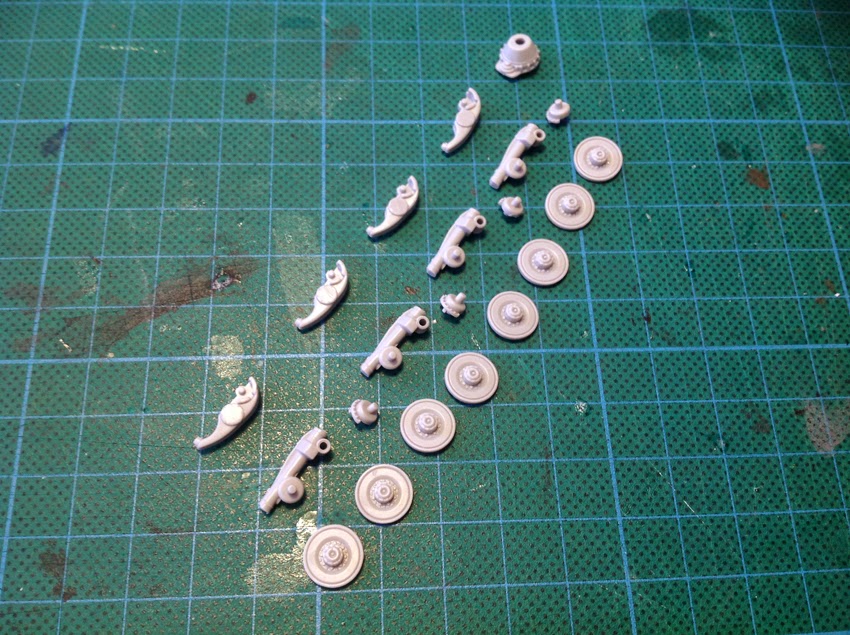 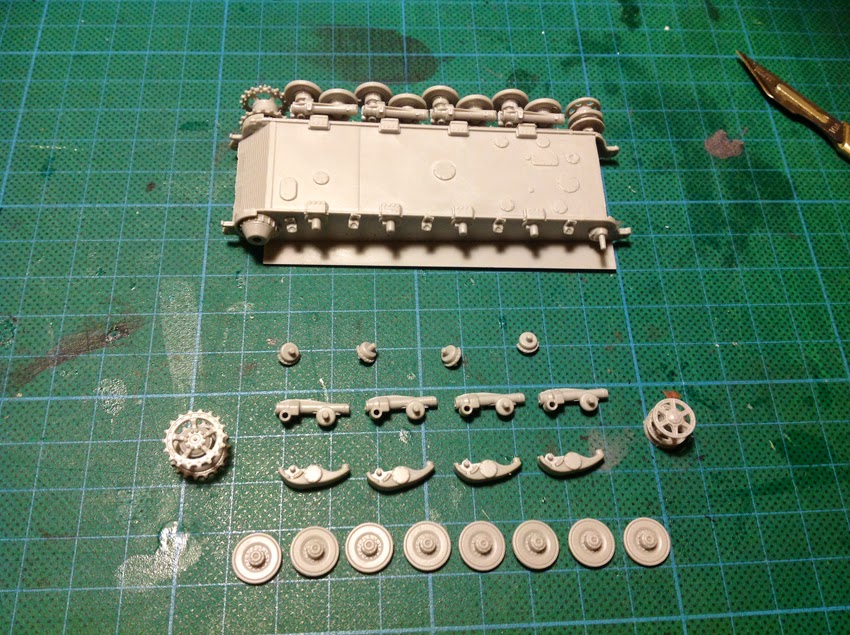 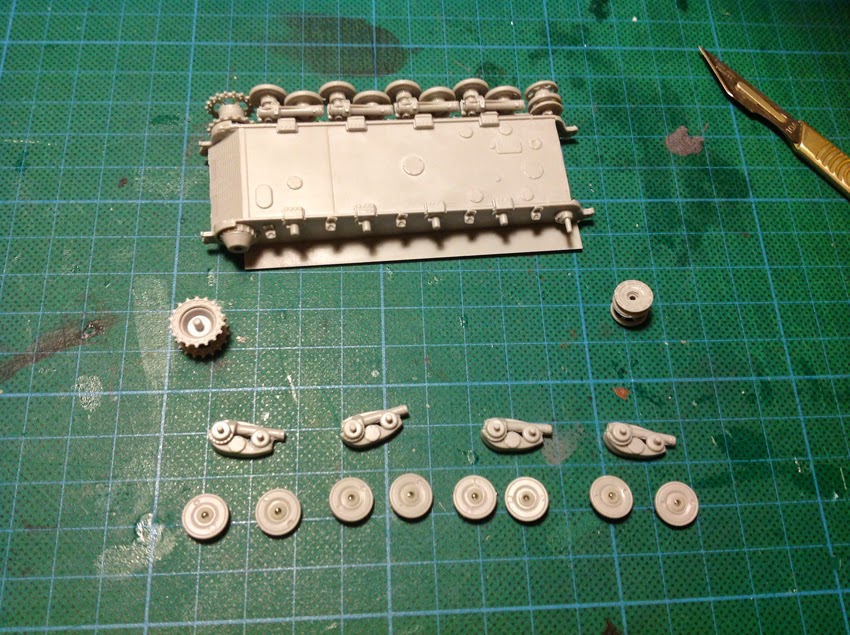 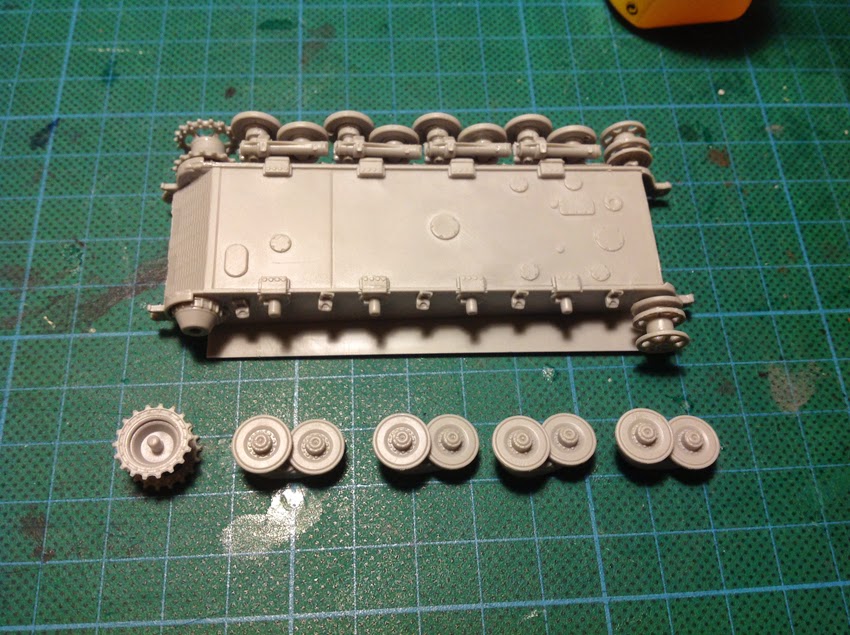 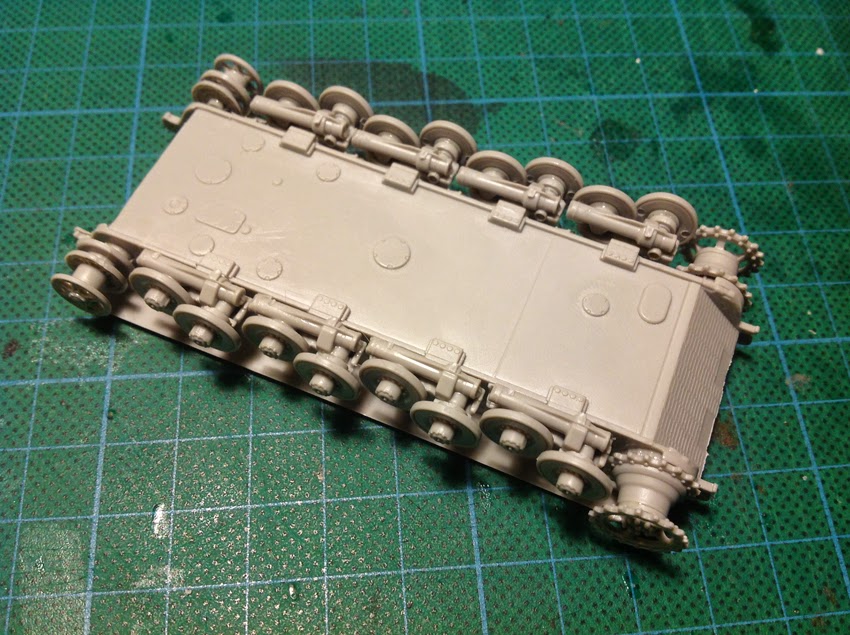 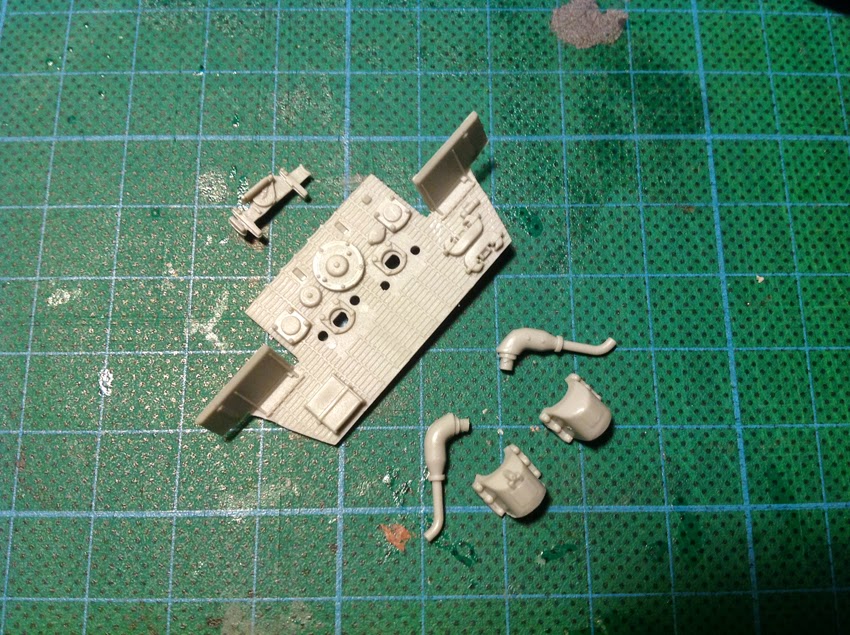 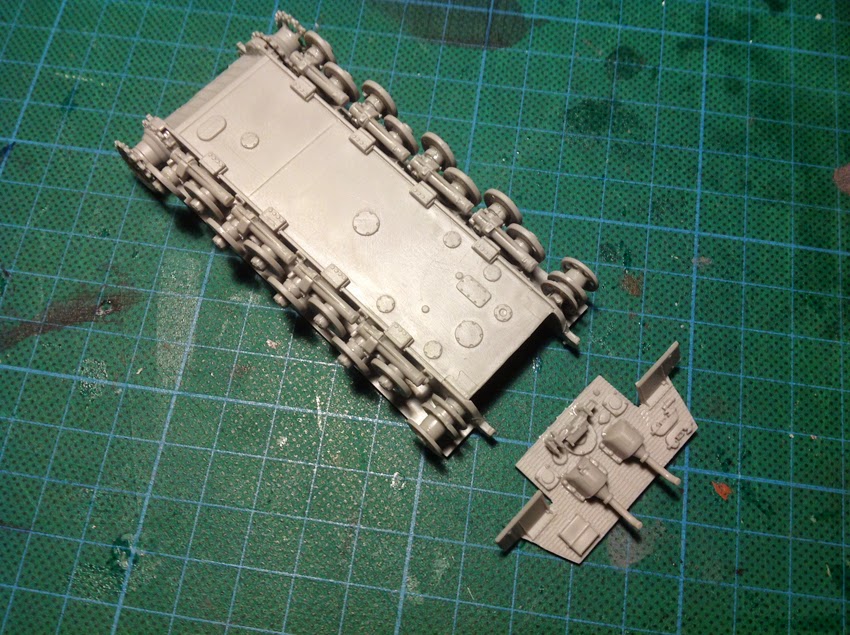 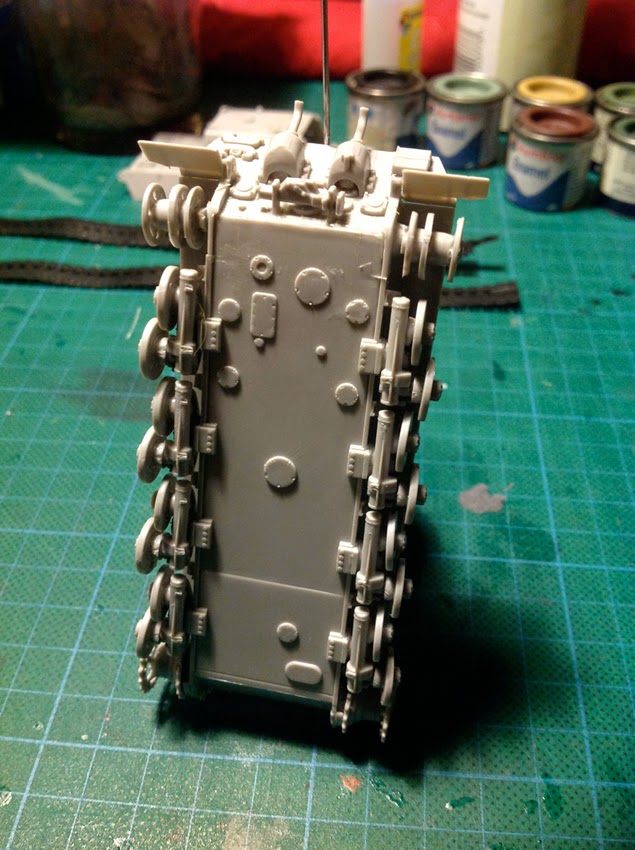 This view of the underneath of the tank is, I feel, rather lovely: I love the way the light catches all the fabulous substructure detail!

The kit seemed, relative to some I've built recently (e.g. the Revell Sdkfz w flak), very simple, comprising comparatively few parts. This made it a quick build. But even better, it was also a satisfying one, in that the fit of the parts was excellent [3]. One reason for the relatively low part count (exact number?) is that several things often cast as separate items - such as tools, the fire extinguisher, etc. - were moulded integrally to the hull. In some ways this is a pity, as such features of a model often look better and more realistic when added separately, but it did help make the build a very satisfying and enjoyably fast and easy one. 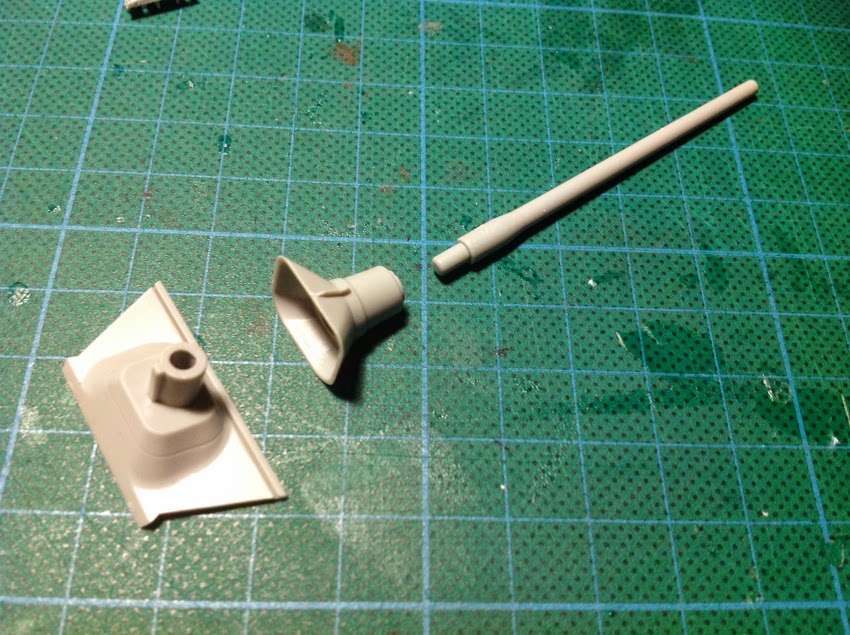 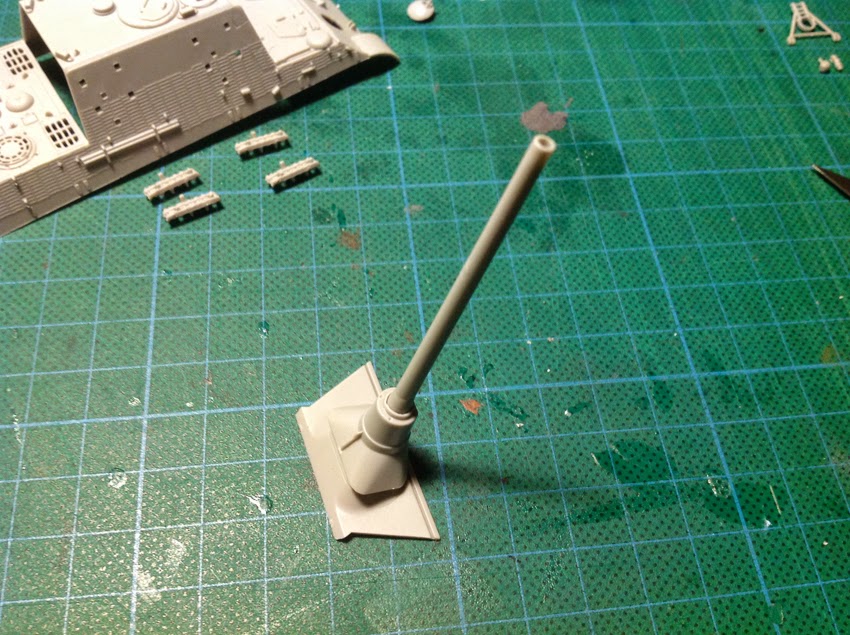 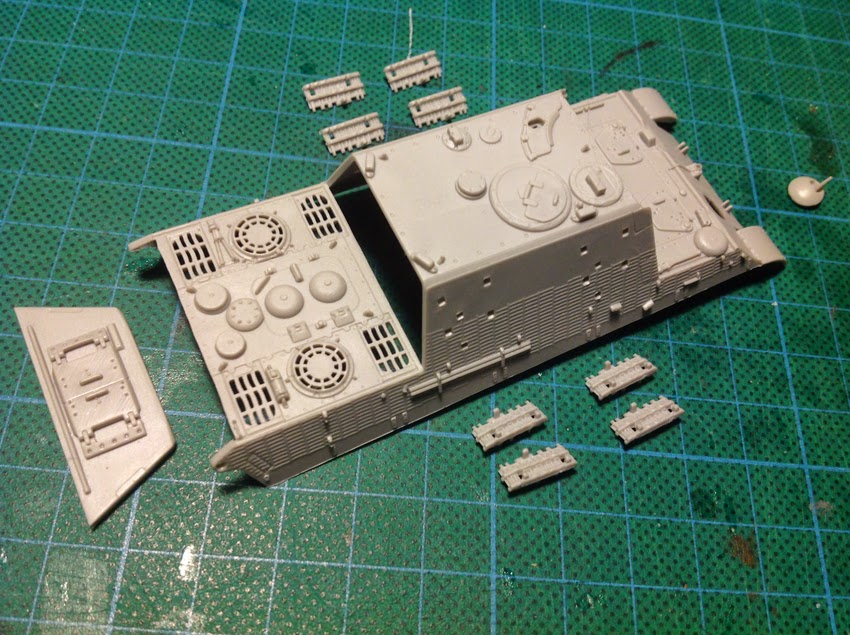 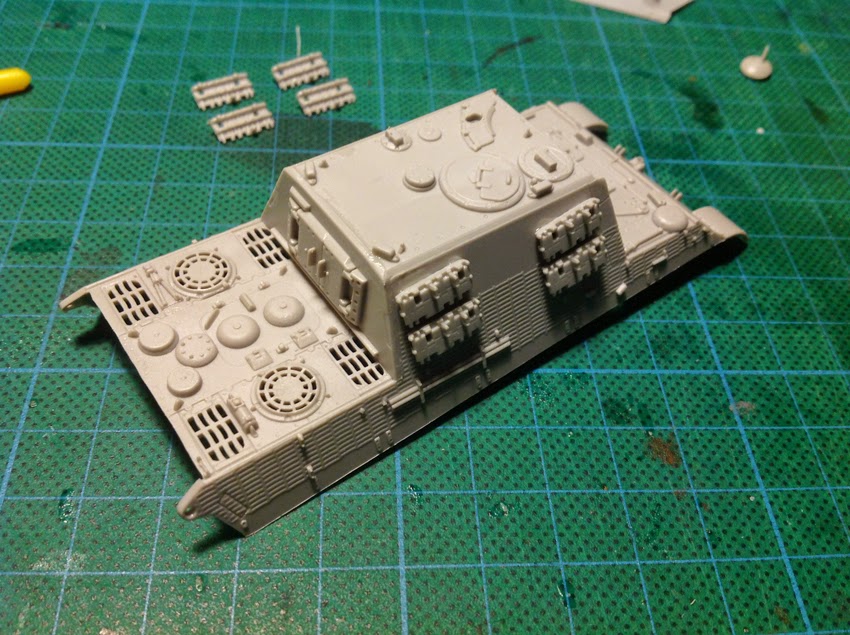 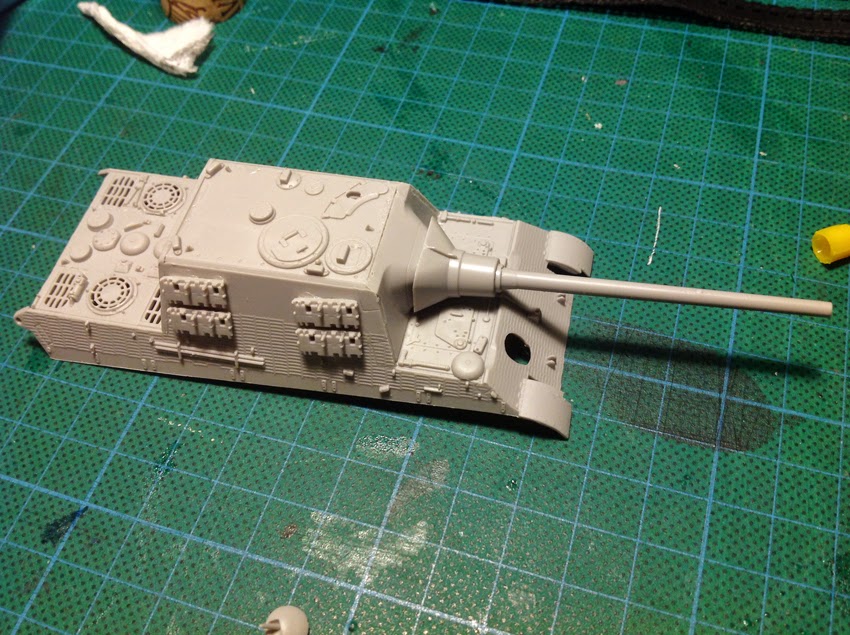 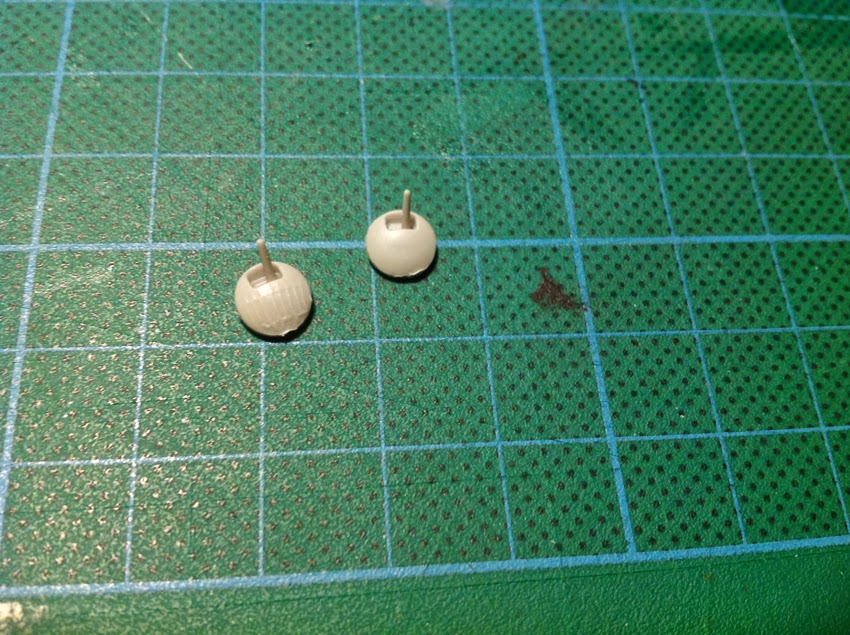 Two minor quibbles: first, it seems a pity that the spare track, which is beautifully detailed, shows the less interesting face, obscuring the more interesting and detailed side (I expect Trumpeter's designers did it this way as it was the historically accurate thing); second, the gun doesn't have any travel, in any direction, being locked in place as a result of the way it's constructed. 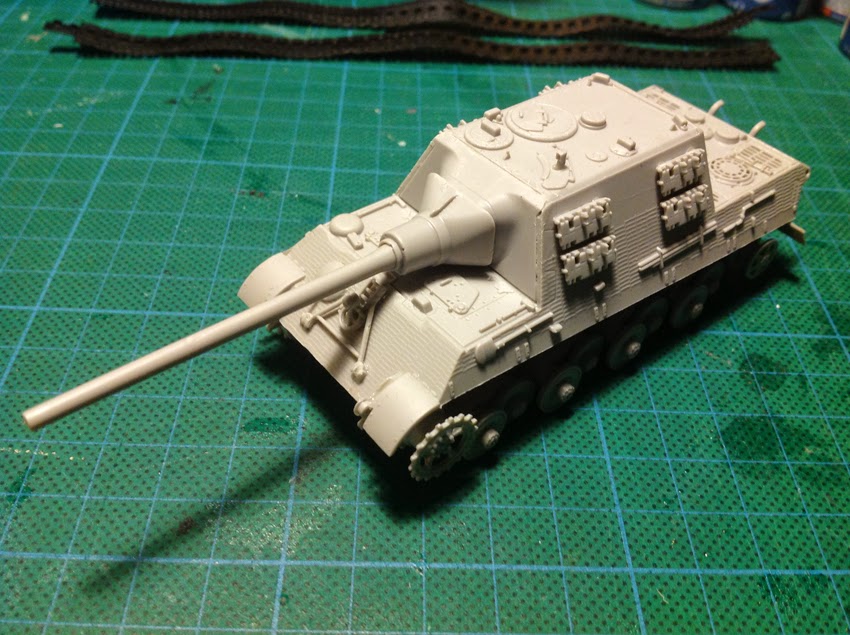 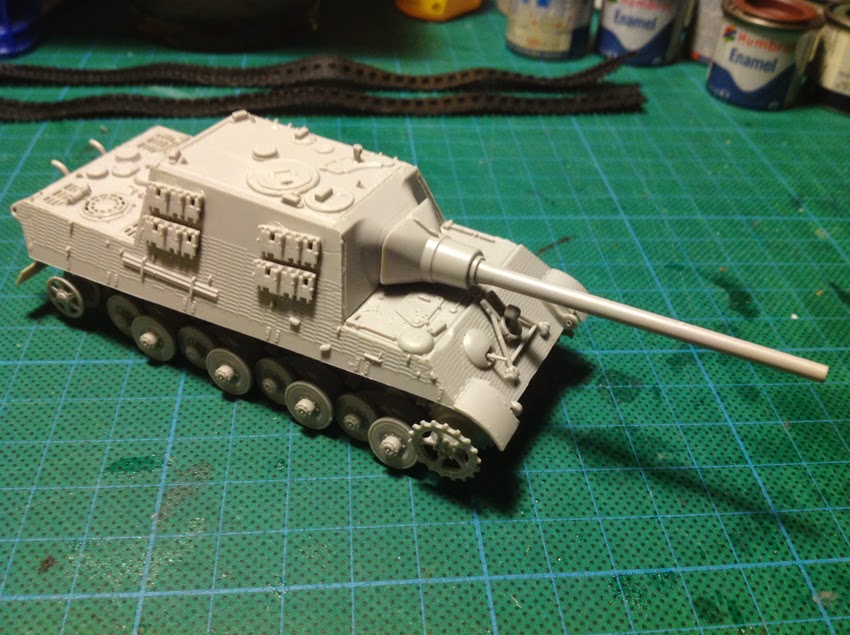 For the time being this joins the queue of tanks that await my purchase of a better airbrush, before they can be finished in terms of paint-jobs. Plus I'll be experimenting with adding the tracks later than I usually do, which might be interesting. The tracks look good, and, acc. to the instructions, can be painted and glued with normal modellers paints and glues, which sounds great.

The instructions are clear, the parts beautifully moulded, giving a snug fit. All in all, I would certainly recommend this kit, not because of any expertise re the tank on my part (which I simply don't have), but because it was bally good fun to build! 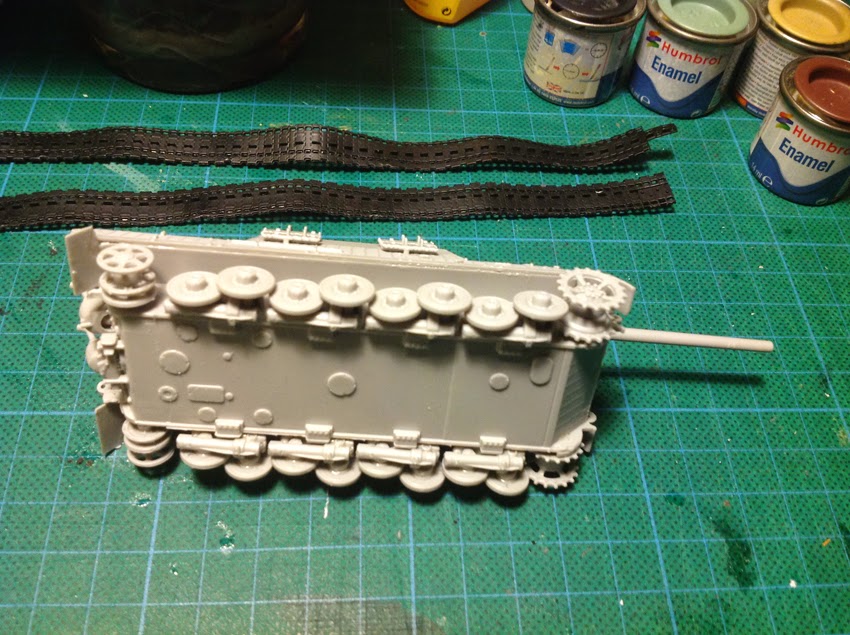 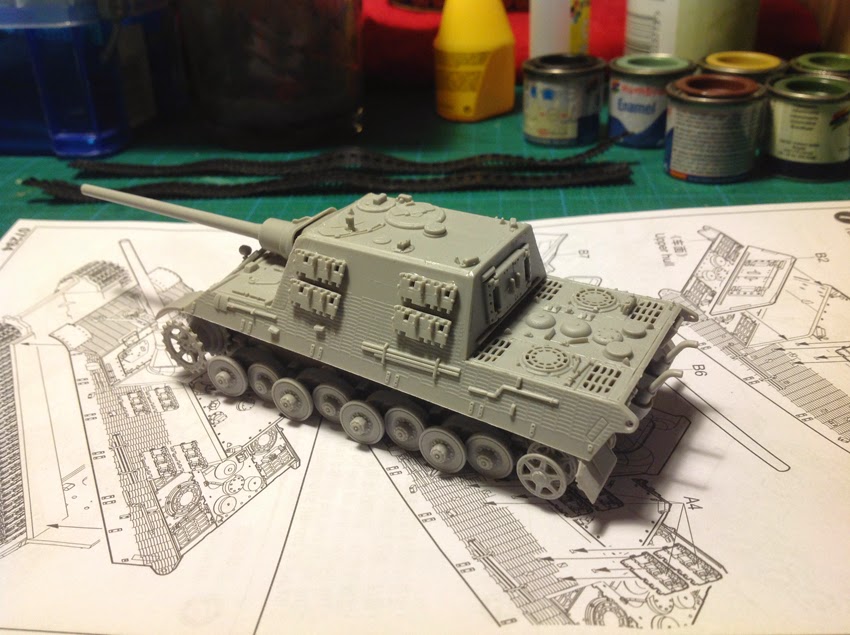 The model as it currently stands.

[1] For example, the spare tracks are labeled A4 in the instructions, but A2 on the sprues. There's also a graphic anomaly re the portrayal of the suspension in step 3 (?) and what it actually looks like as you assemble it. But this is easily overcome, as you've already built a set of the same parts in step 2.

[2] Rather bizarrely, the Zimmerit pattern on the machine-gun bulge is aligned vertically, whereas on the rest of the tank it's horizontal. A mistake, surely?

[3] There were two particularly tricky moments: 1) fitting the front face of the casemate, with the gun attached (this was a bit fiddly, and required holding in place a for some time as the glue set). 2) Getting the gun support and front lamp in place. It wasn't 100% clear the order these should've occurred; I ended up fitting them after I had the barrel in pace, which was, once again, a little tricky.
Posted by Seb Palmer at 22:21