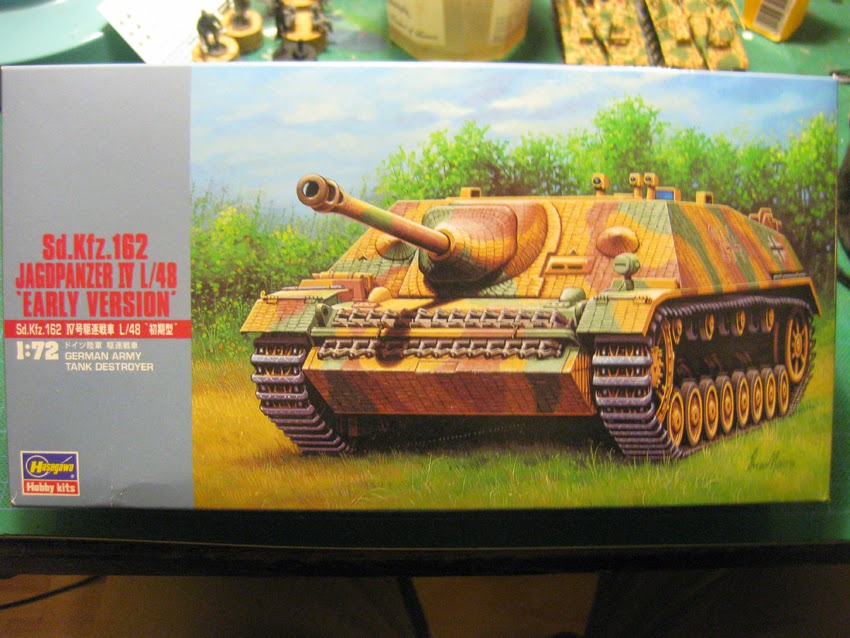 I actually built this in Dec 2014, before I built the Hasegawa Eggplane, which I already posted here about. I bought the Eggplane years ago, and the JagdPanzer IV not very much before I built it. And then I've ended up posting them out of sequence, build-wise. My chronology here is all over the place!

Anyway, like the Eggplane, this was a real pleasure to put together, even taking into condideration the mistakes I made (in both builds!). I seem doomed, at present, to make at least one significant booboo every time I build a kit. Hey-ho!

What's In The Box?

So, what's inside the box? Well, there are seven sprues, six of grey styrene, and one of black rubbery stuff for the tracks, plus a sheet of decals. The box art depicts a vehicle in the classic three colour scheme clad in zimmerit, sans fixtures for schürzen. The kit itself has no zimmerit, but plenty of schürzen fixtures! 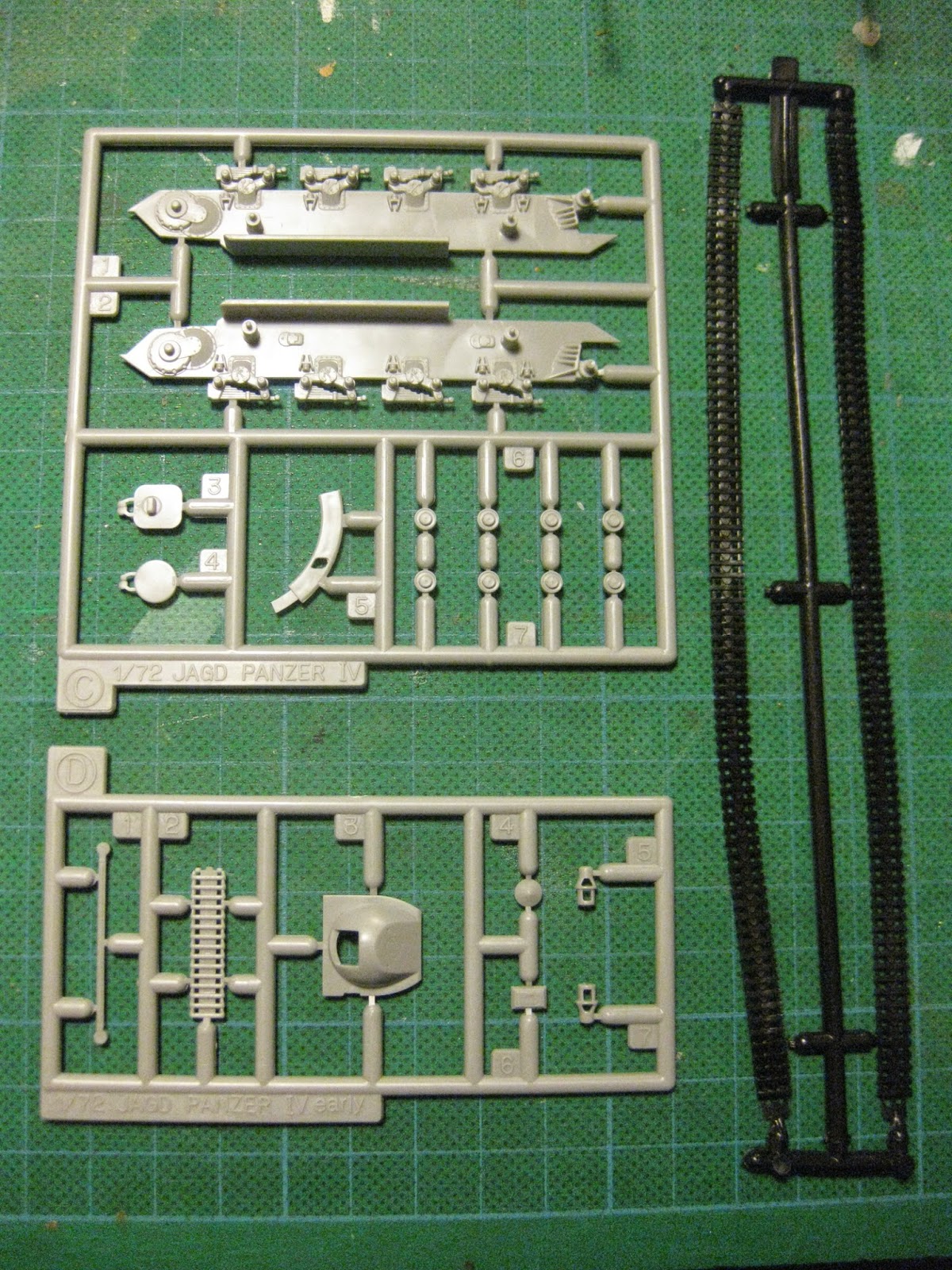 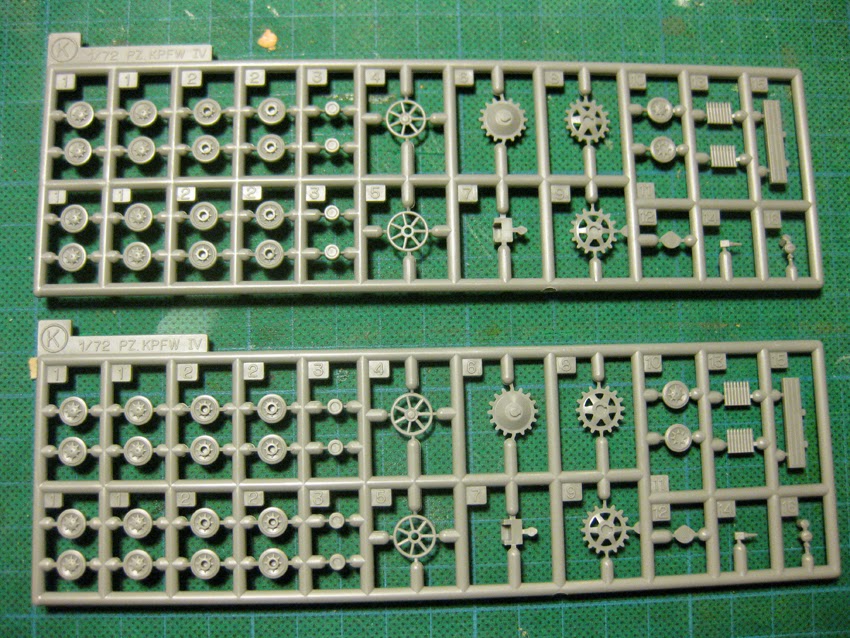 Unlike the Zveda Tiger I I just finished building yesterday, and a post about which I'm also preparing, this kit has all the running gear as separate parts, a multitude of wheels on two sprues. The Zvezda kit has a goodly chunk of the running gear in pre-formed rows, giving the modeller instead the tools for the hull as the separate fiddly add on stuff.

Each of these very different approaches has its own good and bad points: in this kit it's a bigger and harder job to get the wheel on, and especially to get them all properly aligned; but here the tools are less satisfying, as thy are not full sculpted in the round. Some would remove them, and replace them. I don't think I'll do that in this case (this model is now part painted, although those pics are yet to be added here), but I may start to do so as I get better and more experienced. 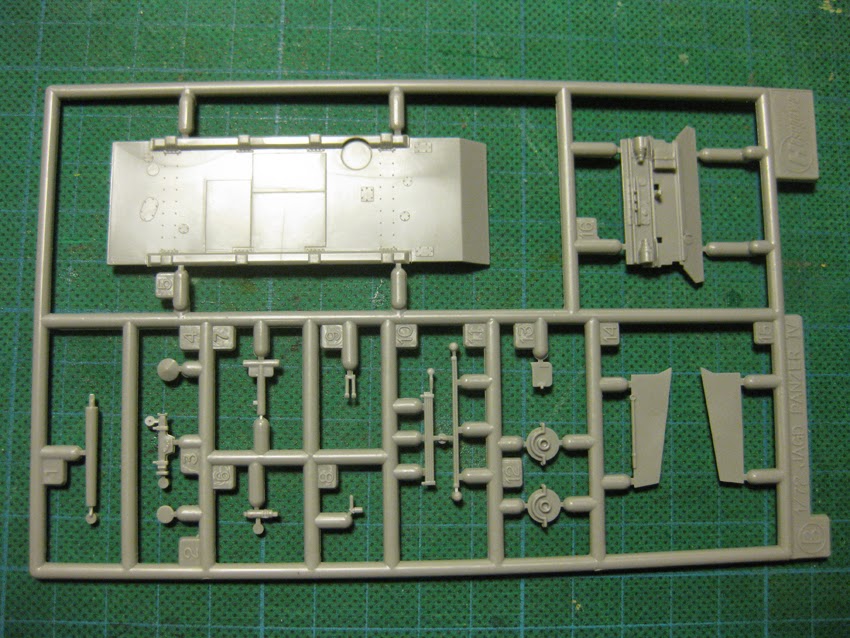 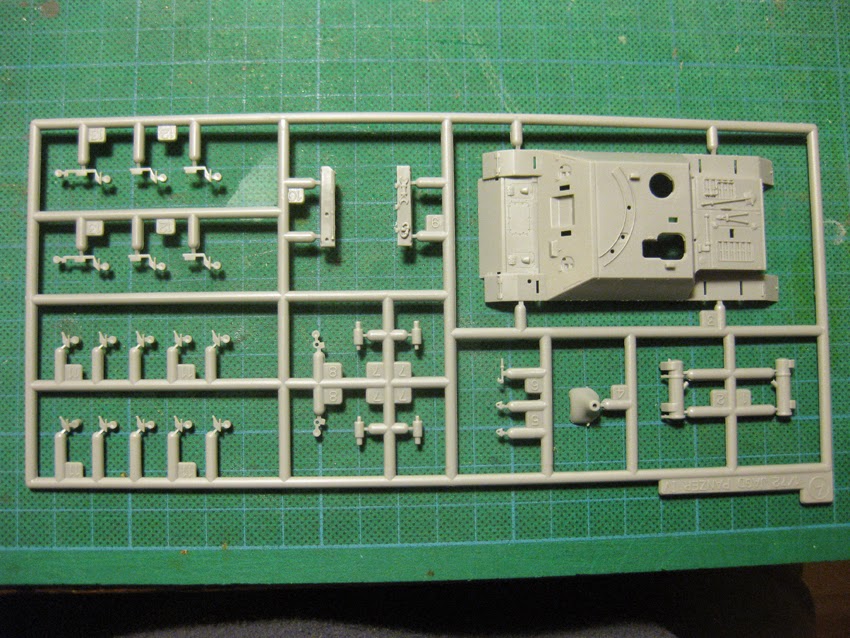 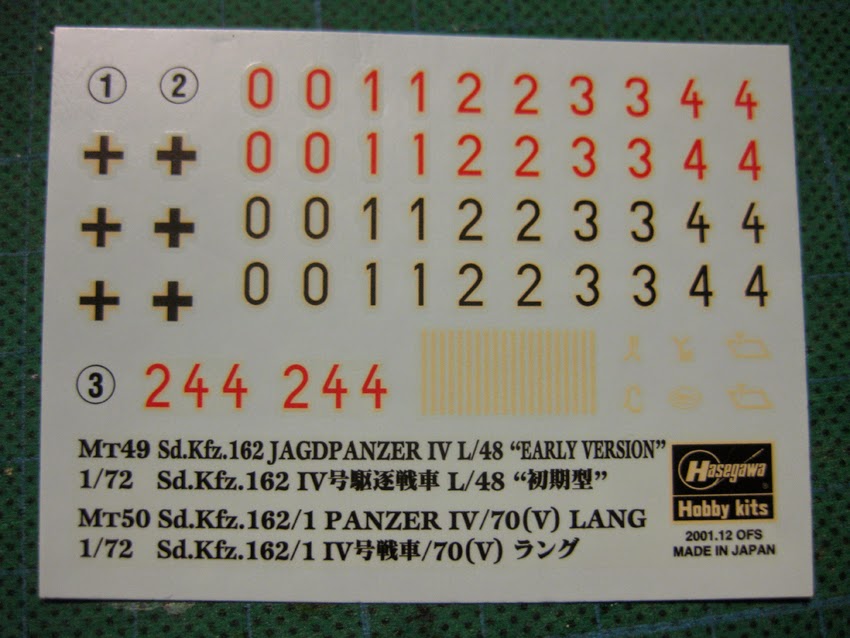 The parts are beautifully crisp and clean, and required very minimal work once removed from the sprues, which is always a pleasant experience. I love this decal sheet as well, for having four rows of individual numbers, allowing me, when the time comes, to create tank numbers with more freedom than most decal sheets easily permit.


Rather unusually - most construction seems to begin either with either elements of the hull, or even more normally, the running gear - this build commences with the gun barrel and saukopf, etc. Thanks to the construction of the muzzle I'm spared the usual drilling-out rigmarole. As with the whole kit, the barrel is an incredibly clean piece of moulding and casting. Delightful! 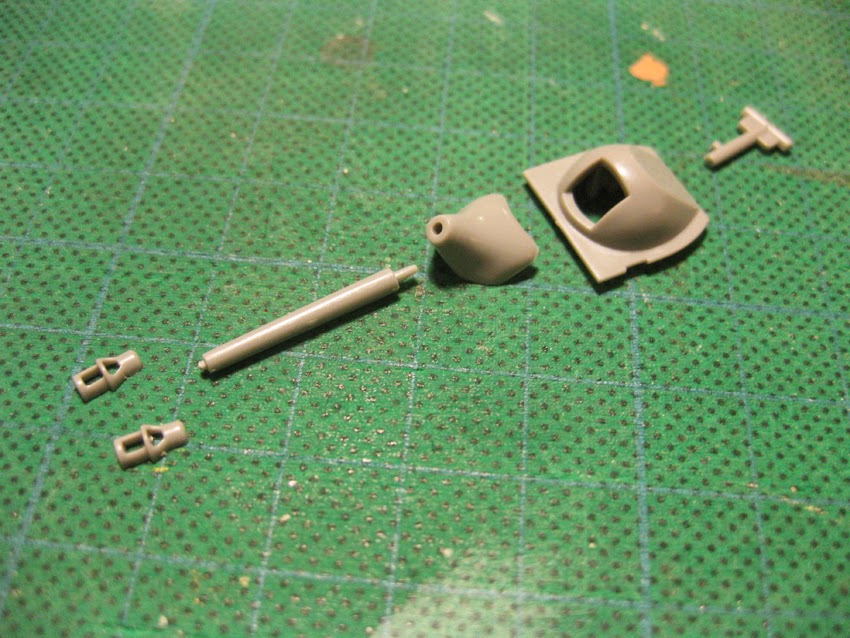 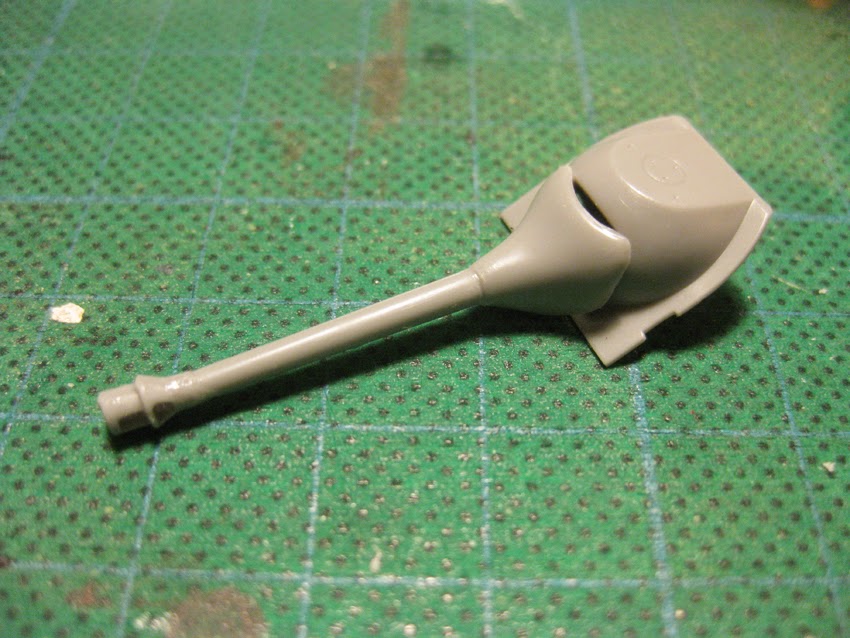 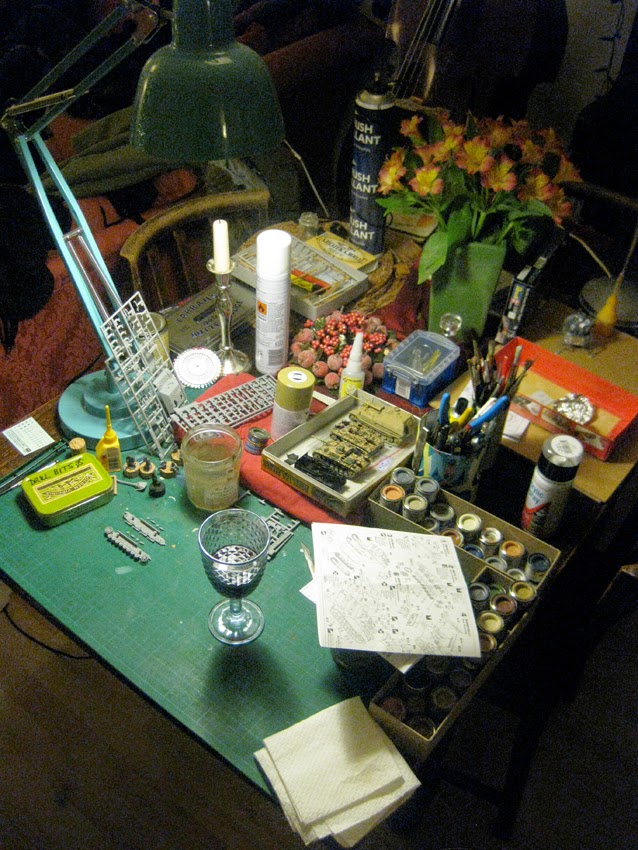 My current workspace: one end of the living/dining room table! 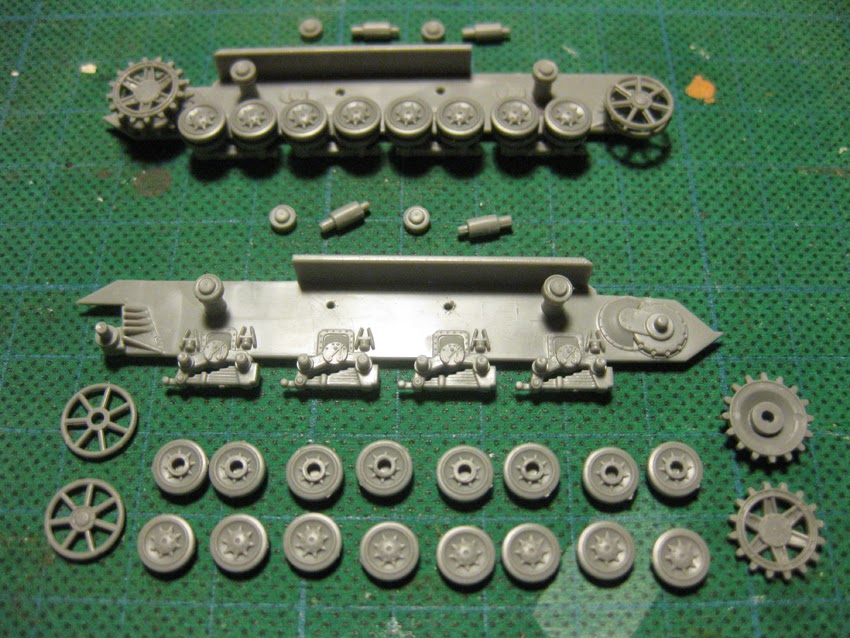 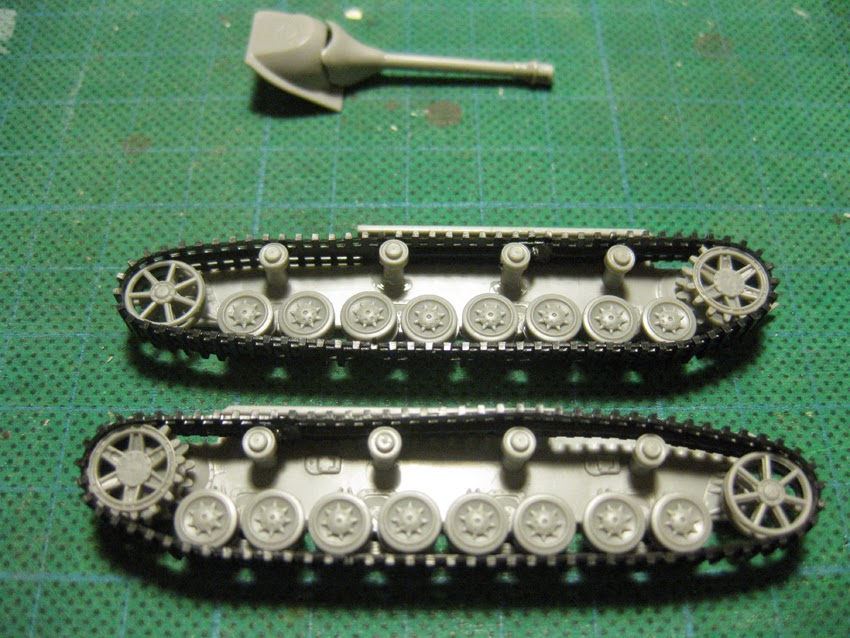 Everything about the running gear and tracks in this kit is, in my view, terrific: the pieces are nicely moulded and cast - very clean - and all the parts fit together like a dream. And even the tracks, so often a thorny issue, fitted quickly, easily and snugly. Terrific! 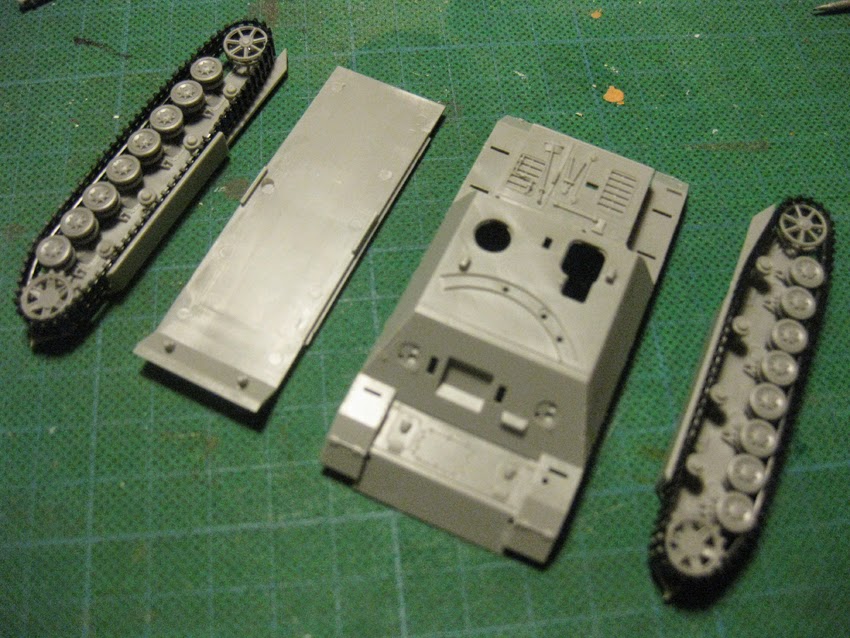 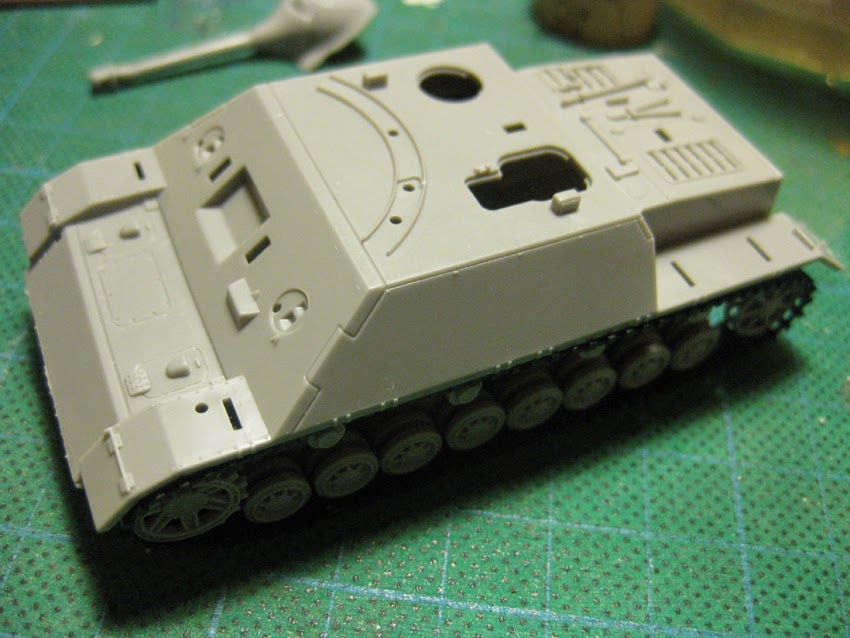 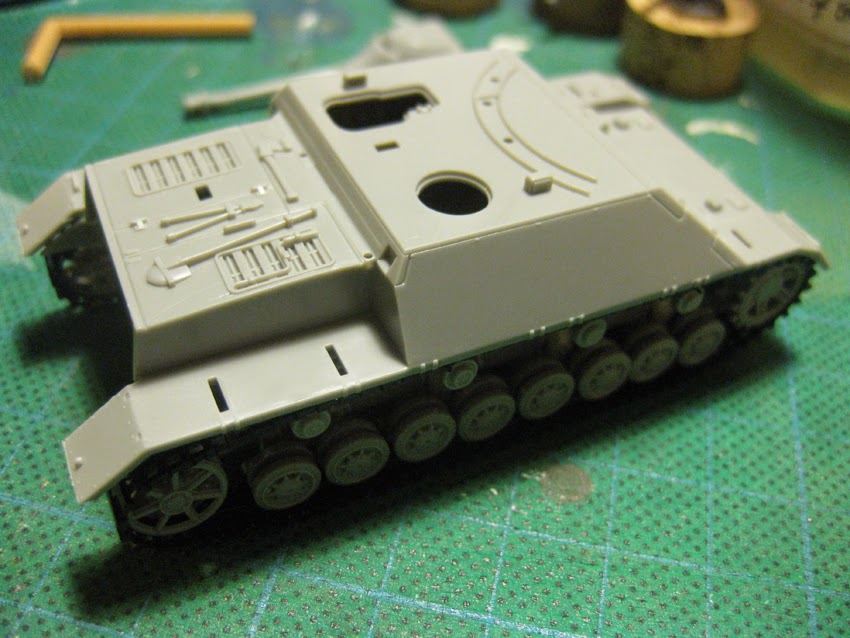 Very rapidly, from building the running gear to assembling the hull and casemate, etc, the tank starts to look nearly complete. After all the praise I've lavished on this model so far, comes my first criticism: having the tools on the rear deck integral to the moulding of the body means they don't look as good or as realistic as they might. 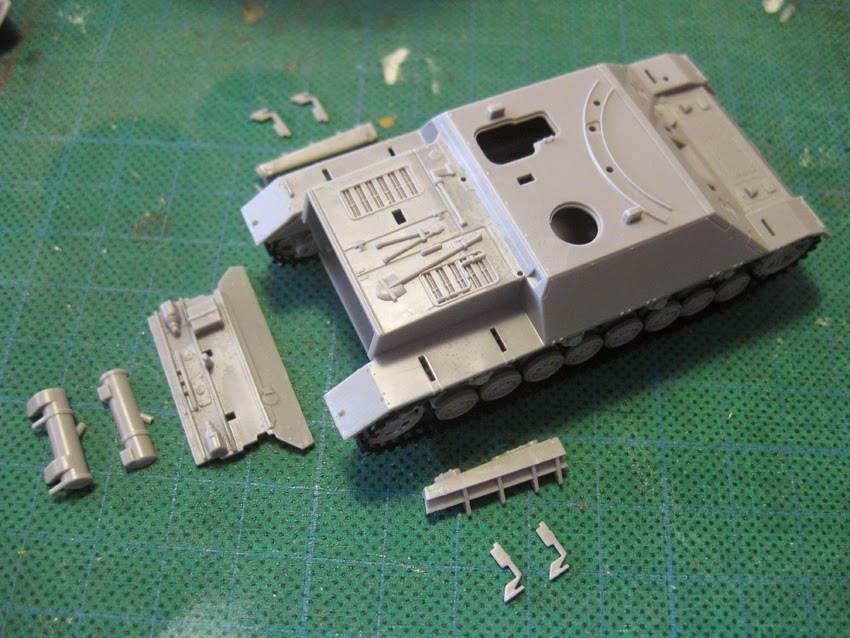 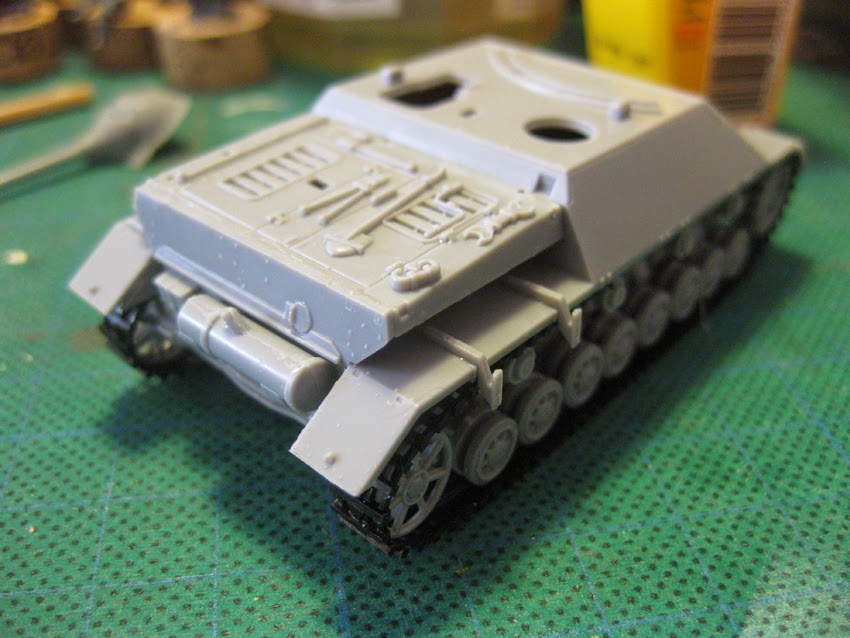 Pics above and below show the rear of the tank getting built up to near completion. 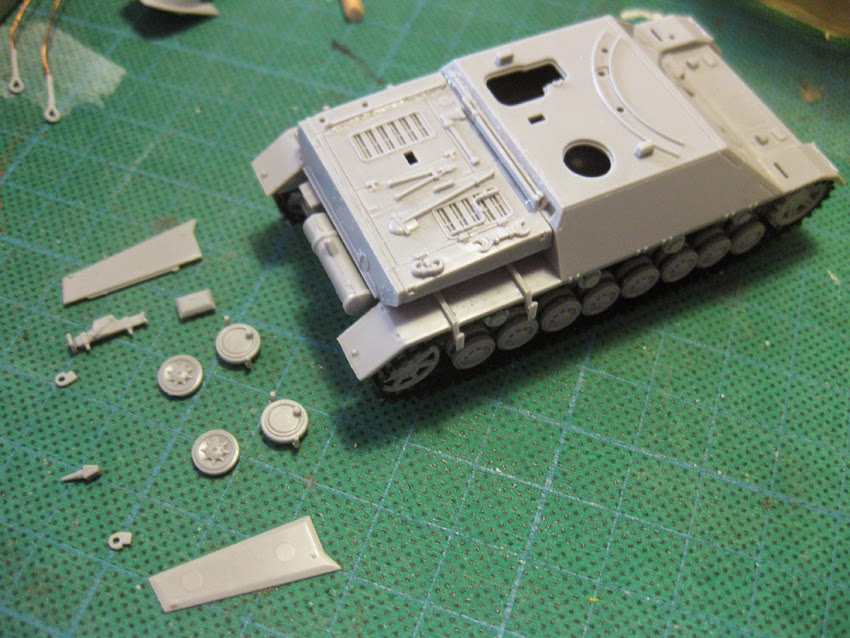 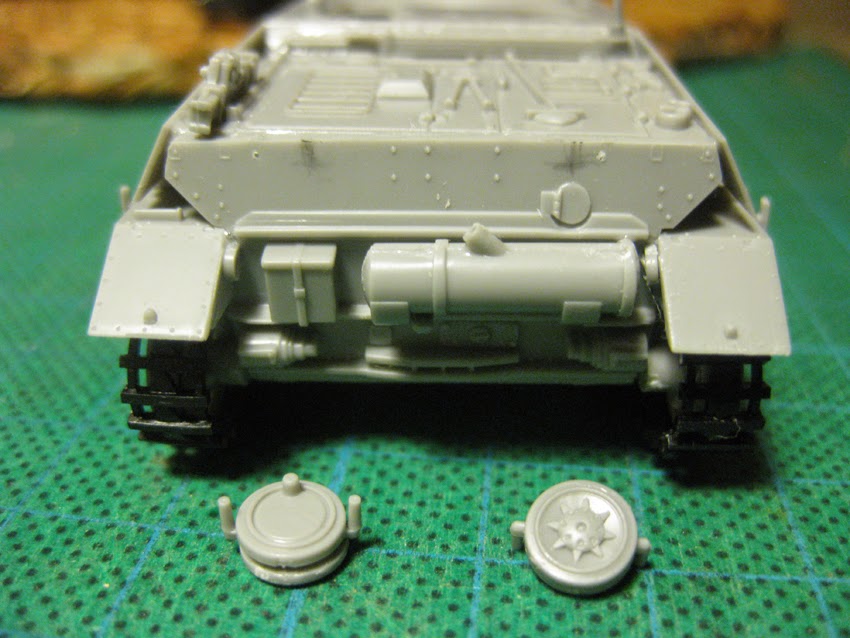 It seems I'm always going to screw up at least once on any build. On this occasion the above pic shows, marked in pencil, (roughly) where I ought to have drilled two wholes, the guide points for which are marked on the reverse of the part. In the end it wasn't too bad, as later pics will, I hope attest.

With the rear pretty much completed, it was the turn of the front end and top. It was quite a long wait between building the gun barrel and mount, and attaching them! 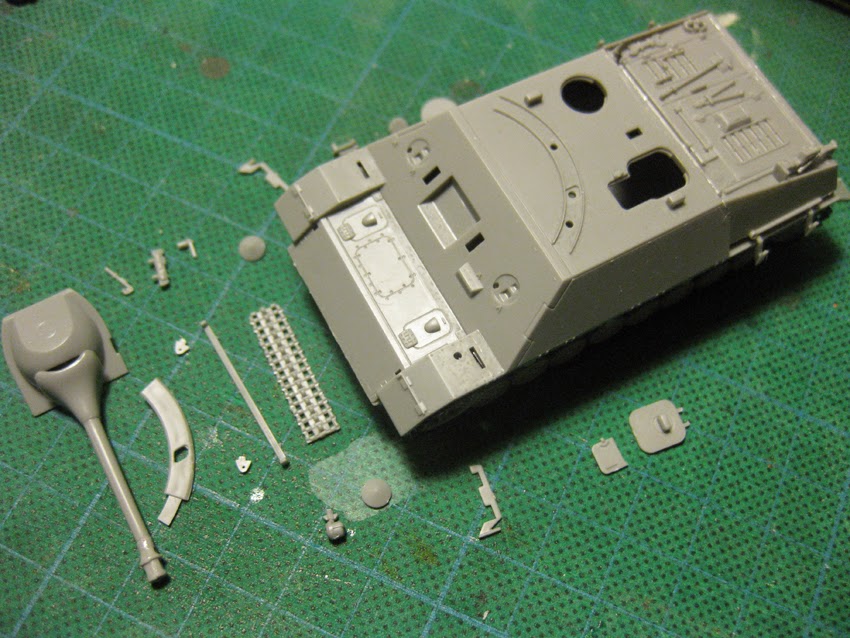 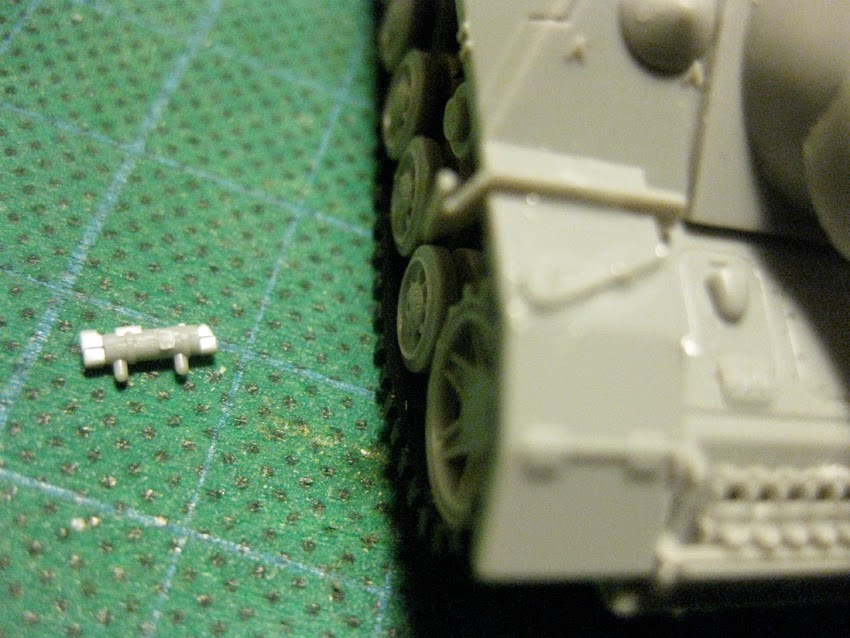 One of the last parts: the fire extinguisher!

Once the model was completed, I was very happy. A nice looking tank that was fun to build. I've undercoated in black, and base-ciated in dunkelgelb, but not got those pics up here yet. This Jagdpanzer IV joins the queue of vehicles awaiting the purchase of a proper airbrush! 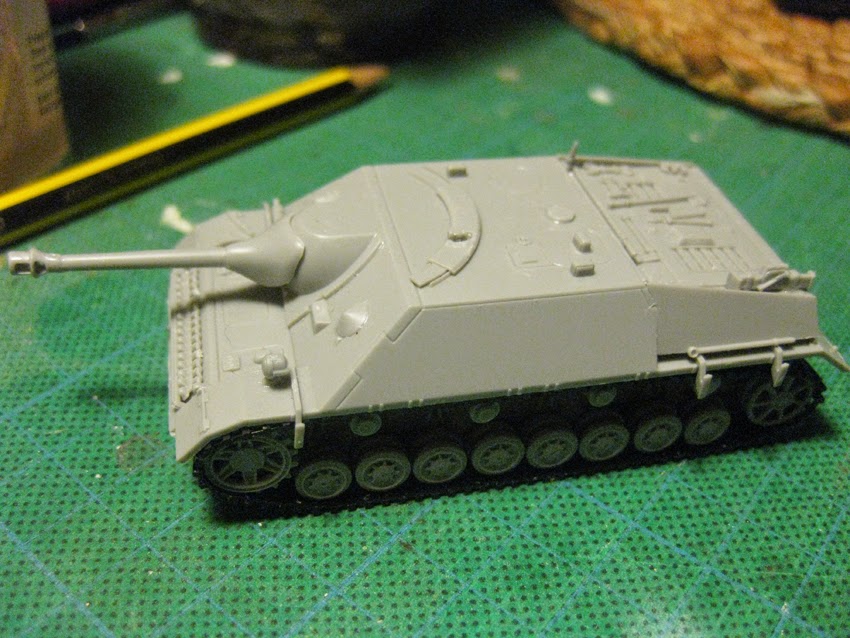 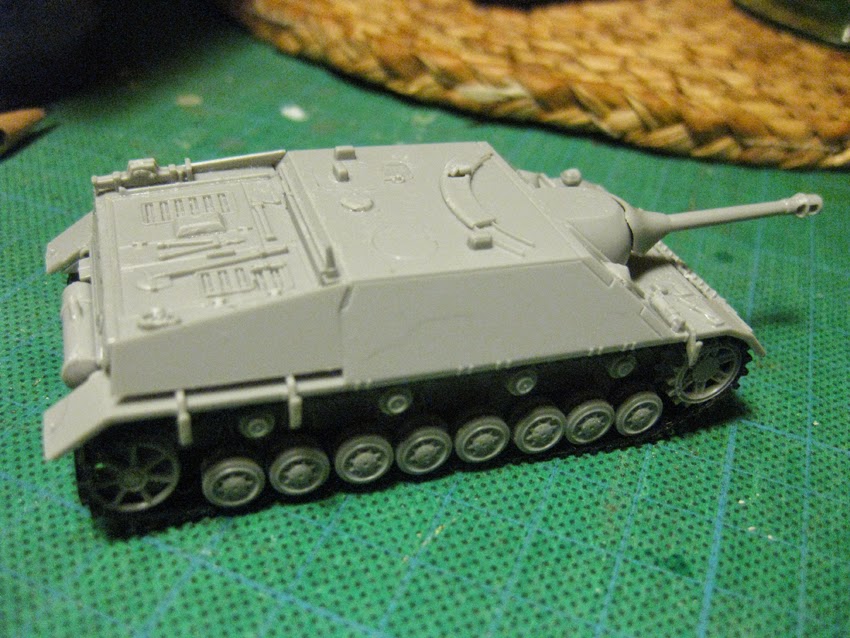 All these parts were surplus to this build, and so they go into the spares box, which is starting to contain a fair old bunch of stuff! 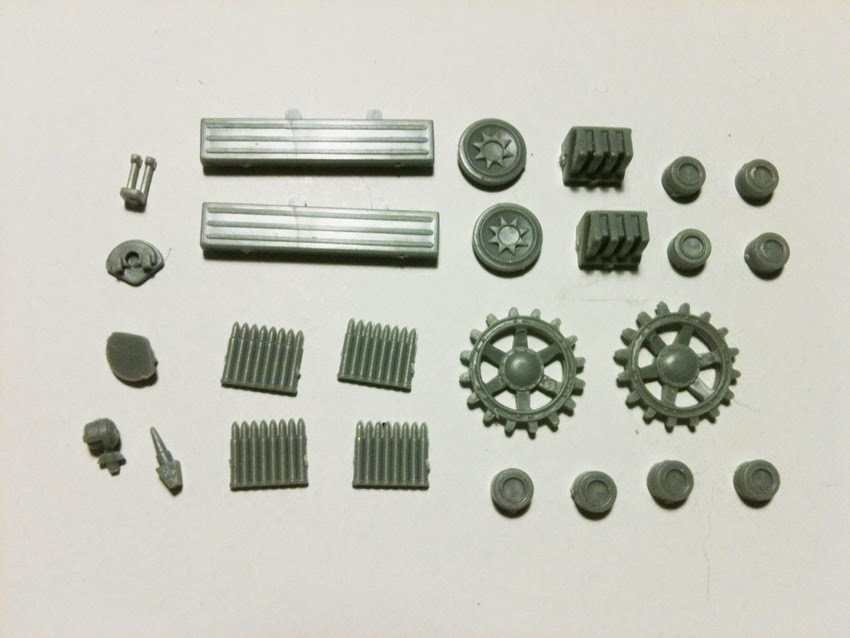