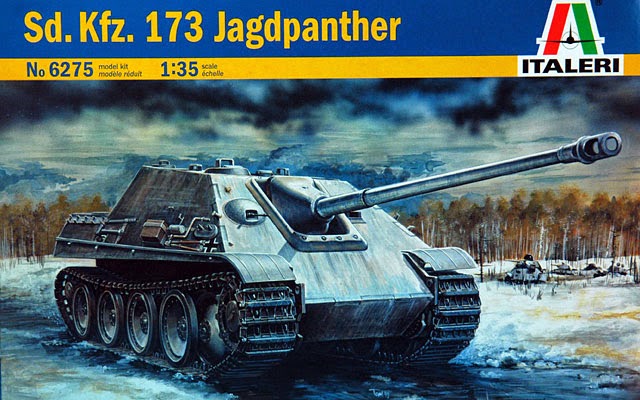 I still consider it to be early days in my return to model making. And in general that means I'm keen to buy different kits every time I buy something, even if I'm possibly aiming to build up a little wargaming force (and I'm not even sure I am!). Where I might want more than one of a tank, this has lead to such developments as my purchase of three different brands of Tiger I, as detailed in another post I'm currently drafting.

One exception was the Special Armour Nebelkraftwagen, of which I deliberately bought two, so as to have one each for my two pairs of Nebelwerfers:,one pair deployed; one pair towed). Another exception was the accidental double purchase of the Italeri JagdPanther, or Sd.Kfz. 173. A previous post is more a less a photo-essay on the build of the first of these two identical kits. This post follows the second build, and adds a few thoughts on having made two of exactly the same kit, and if/how the builds differed, etc. 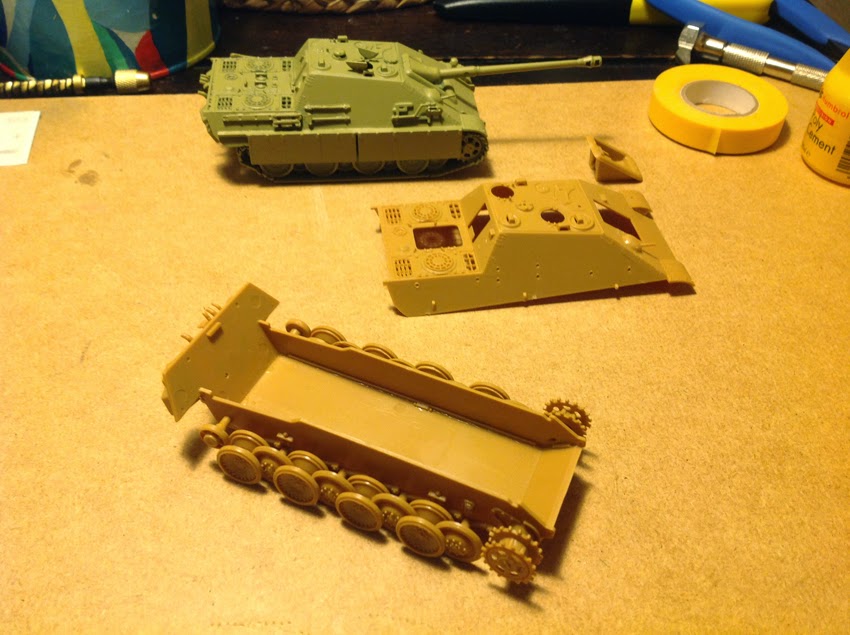 My 1st Italeri Jagdpanther, now uncercoated and base-coated, in the backgrpound. My 2nd at the wheels only stage.
This is actually an old Esci model, rebranded as Italeri. And it was, I believe, Esci who brought in the link-&-length approach to tracks. In its day these tracks, and even the new and higher level of detail this and similar models possessed, made such Esci kits cutting edge. Don't just take my word for it: 'in their day they were the best on the market and many of them, even today, have not been bettered', enthuses Glen Porter in his review of this very kit at missing-lynx.com. But that was ages ago now, and he ends the same review by saying this model is 'Recommended for spare parts only'!


On my first build of the model I found the tracks and running gear really hard work, and the incremental mounting up of errors in alignment meant I ended up with what I felt was an ugly mess. Actually, once the schürzen were in place and the model was undercoated and base-coated, it didn't look so bad.

But I was determined to do better next time! And I think I did. Indeed, so much so, that I decided on the second build to leave some of the plates of schürzen off. This entailed cutting them up. And even, in one case, slicing off a bit of mounting fixture detail and re-applying it to another plate. But this all came at the very end of the build. So you'll need to scroll right down to see the pictures of that stage! 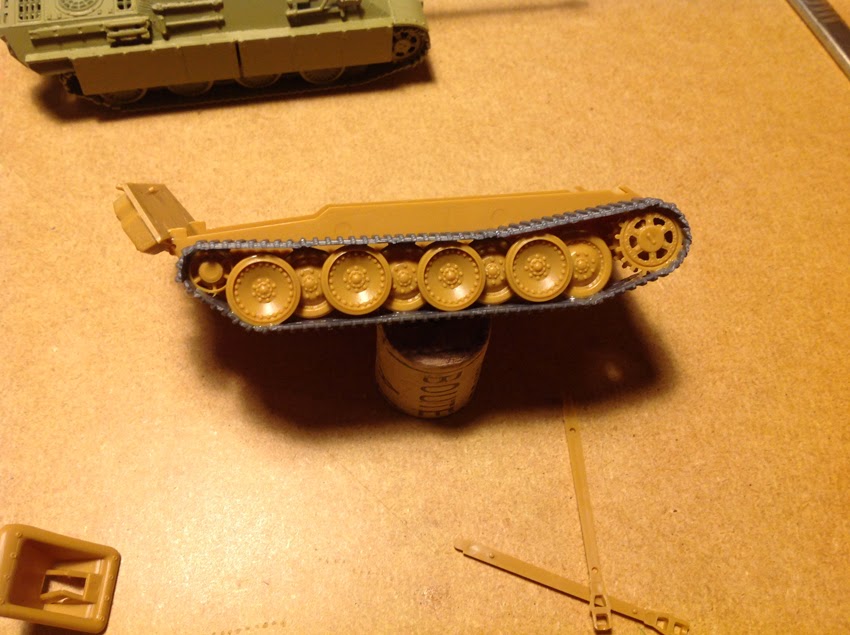 Tracks and running gear: definitely better this time around!

As with many small armour builds, the first elements were lower hull and running gear. In this instance starting with fixing the wheels in place for both sets of tracks, which go on two separate side panels. The instructions show the track being added at this stage. Having done exactly this first time around I opted this time to fix all the wheels in place, but then, rather than doing the tracks, go straight to step three, and compete the lower hull.

Having done this, and - with a little bit of fuss and bother on one side (requiring the snipping off of some of the wheel-mounting pillars, so as to allow the wheels to properly align) - having managed to attach the wheels in much better order, I decided to experiment with using Tamiya masking tape to hold the track elements in place before gluing commenced, as I've done recently with some other fiddly parts (most notably the three brass photo-etched turret-ring elements of the Dragon Tiger I). But this didn't work at all! 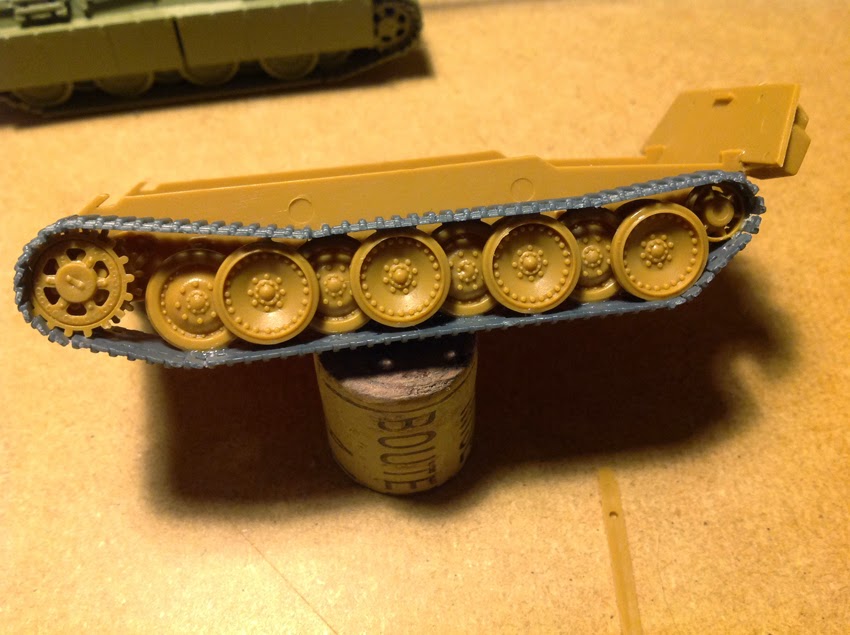 Better than before... but not exactly perfect!

Having abandoned the tape method, I simply lined all the track parts up in their proper sequence on the table, and slowly and painstakingly fitted them all by hand, one section or link at a time, always checking that overall shape and alignment were being maintained. This isn't made easy around the toothed drive-wheels, where the teeth slip comfortably into one of the holes in the segments of track, but not the other, with the unavoidable result that track here gets twisted out of its proper flat alignment.

Still, with patience and a lot of fiddling, sometimes involving strange contortionist acts of fingers, tools and hands, a better result was obtained than on my first build. In an unusual bout of sensible behaviours, I took an overnight break at this point, allowing the tracks and running gear to properly cement. 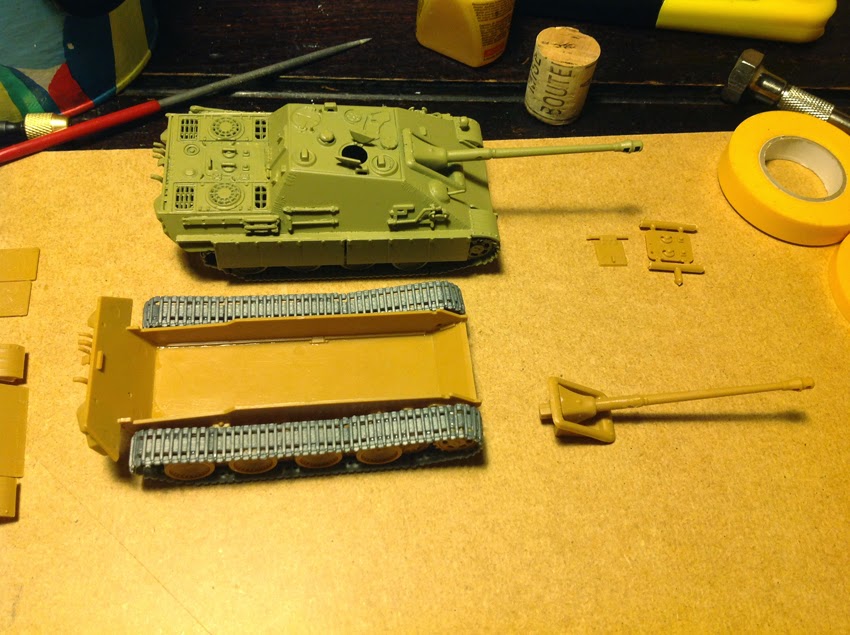 Having thus departed from the sequence of the build as layed out in the instructions, where before I had strictly followed, I now felt free and confident enough to pursue the remainder of the build in the order I saw fit. My photographic record keeping tho', like the build itself, grew a little more chaotic and erratic. 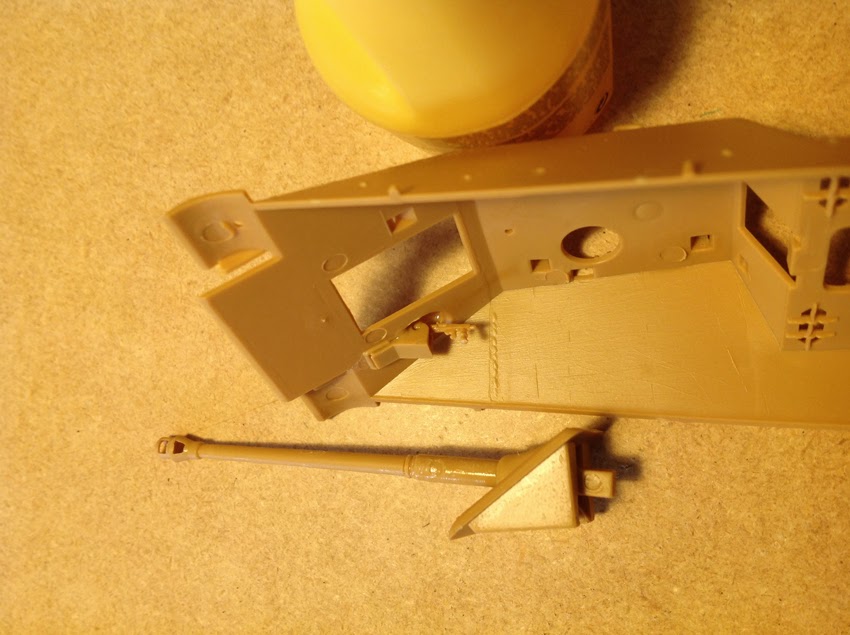 There's no inner hull detail on the breech end of the main gun, but there is on the machine-gun!

I completed the maching gun and main gun next. The machine gun appears to be designed so it might be left free to swivel. But I find in practice that it ends up becoming fixed. Whilst the breech end of the main gun itself is not detailed (as it is, for example, in the 1/76 Fujimi Elefant), the inner-hull part of the machine gun is. On both builds I found that cleaning up the opening of the machine guns protective dome always lead to it becoming misshapen, after which it needs enlarging in order to restore a semblance of the proper shape.

Having assembled the machine gun and main gun, and before fitting the latter (a fiddly build that requires much cleaning up, inc. the filling of ejector ion marks), I attached the upper hull to the lower hull. On my first build I found I was left a with a rather large gap - which I missed before, even when painting, and which consequently still needs filling - where the rear plate of the hull, carrying the exhaust pipes, meets (or in this case doesn't quite meet) the engine-cover area of the rear upper hull deck. 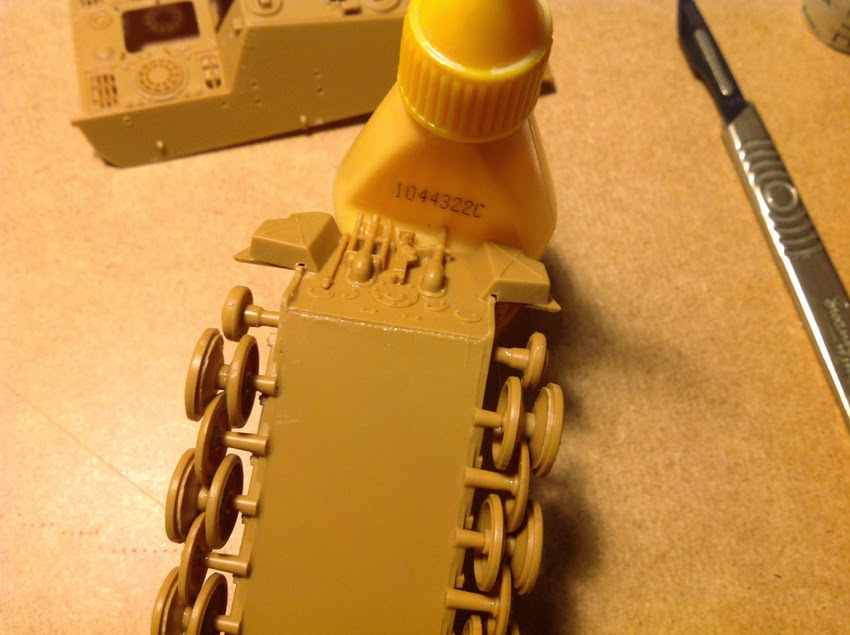 Note the little cut-aways I had to make on the rear stowage bins, to get the rear hull plate to fit properly.

My second build is much cleaner in this respect, but it took cutting some chunks out of the rear stowage-bins to get the rear plate properly placed. It was only thanks to this that the gap was eradicated, which means that on my first model this plate slopes at a very slightly incorrect angle. On my second build the fit on the hull is near perfect. But be aware, if you build this tank, that you will need to deal with those bins!

Some of the tools and stowage, many of which parts are good for being fully realised separate three-dimensional parts, are laid a little differently from how they are in the instructions on both models, whilst some are placed exactly as shown. Where they're positioned differently, it's usually because of an issue of available space or fit. 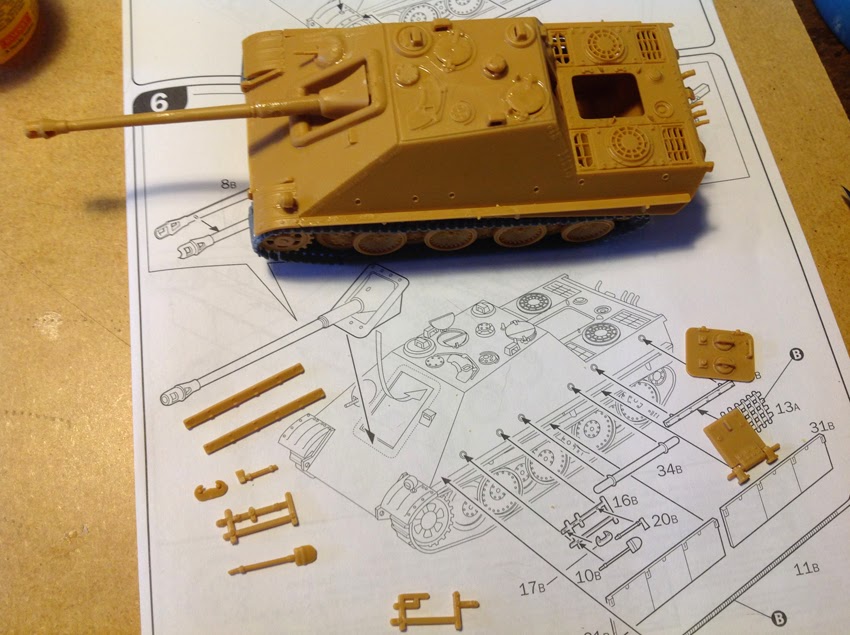 I found the spare track segments don't sit easily or comfortably where illustrated in the instructions. So I left them out of the first build altogether (the parts went into the spares box), and added them as front sloping hull armour-reinforcement in the second. All the tracks, both the link-&-length sections and the extra segments, have one detailed face, and one completely blank flat face. This is obviously not too realistic!

Also, as some online reviewers of this kit point out, the main track and the spare sections don't even match exactly! In both kits I've used the two individual spare track links, from the main link-&-length sprue, to make up short spare track sections. And these I do hang from the rails, as you're instructed to do with the larger spare track parts. 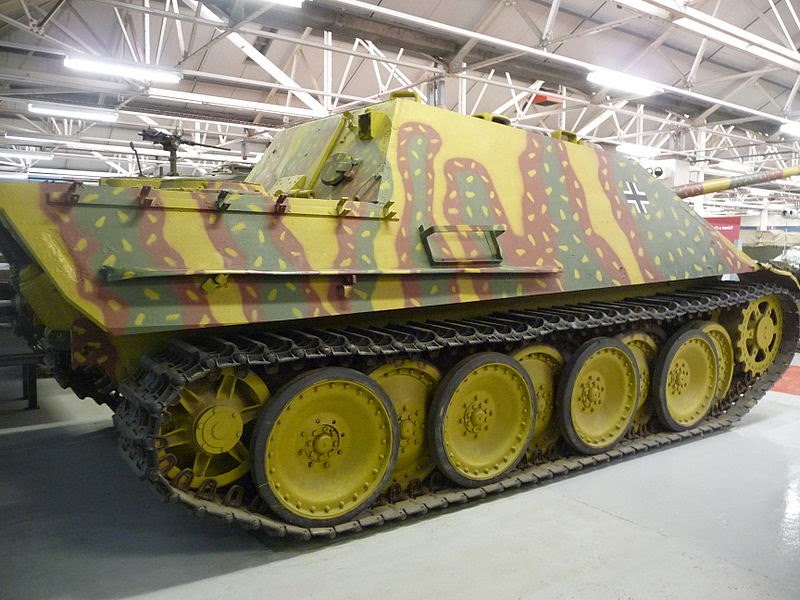 A Wikimedia Commons pic of a still extant version of the real McCoy.

But whereas the larger parts, originally intended for this position on the model, don't sit well, these smaller segments are fine. I also added a further two links here in the second build that were left over from cropping and combining the two larger segments which I'd instead chosen to attach to the front sloping armour.

The rear deck engine cover grilles are open, which is nice. And one could, in theory at least, even have the model with the engine deck open, although that'd entail adding inner engine compartment detailing. The rear casemate ammunition-loading door could also be modelled as open. Again to do so satisfactorily would entail adding inner detail to the model.

The two personnel hatches atop the casemate are supplied so that you can easily choose to have them open. Obviously if you want to use the tank commander figure supplied you'll need to leave at least one of these open, and I did so on my first build. If modelling them closed, be very careful, as they're very fiddly, and are small enought to drop through the openings into the inner hull area. If this happens to you, as it did to me on both builds, getting the parts out again - esp. if they've got solvent glue on them - can be tricky! 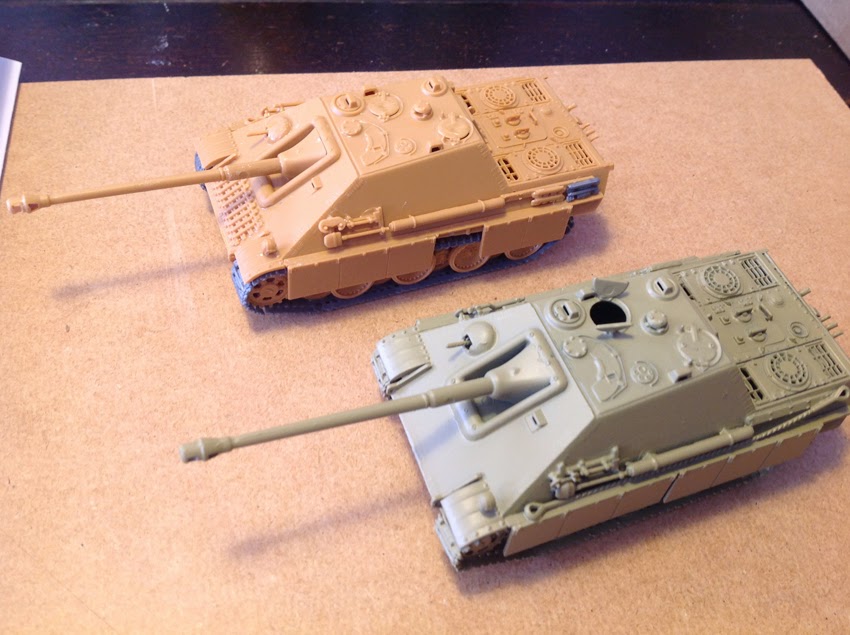 Note the twisted towing cable on the lower (1st) model. I'm wondering if I ought not add some scratch built clip-type fastenings, so the cables appear to actually be attached to something?

On my first model I twisted the supplied tow cable, which comes as one long straight length, so it starts on the horizontal 'mudgaurd', as shown in the instructions, but ends attached to the rail on which the instructions say you should place the larger spare track pieces. For the second model I followed the instructions, but placed the cable on the other side of the tank, for the sake of variety.

I'll undoubtedly look at some photographic reference and add some extra stowage. And I'll probably also use the figure supplied for the first tank, although I don't think it's a terrific sculpt. Colour scheme wise, I may well go with the pattern shown on the bottom of the back of the box, which is an attractive three colour scheme. 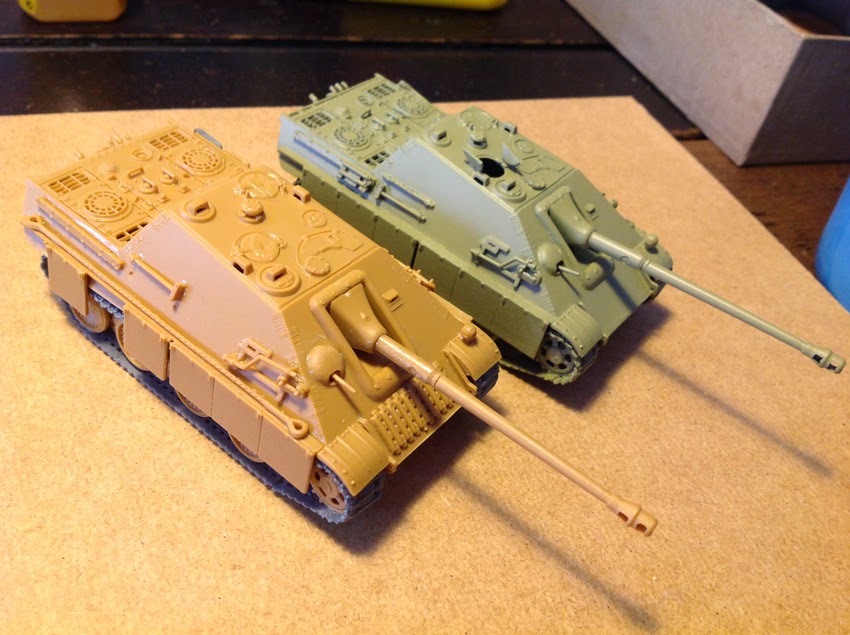 The two JagdPanthers side by side. I've left a couple of panels of schürzen off the 2nd build.

For now these two tanks join my ever-growing armour pool, awaiting a proper paint job, which won't be possible until I finally decide on and then splash out for a decent airbrush and compressor.
Posted by Seb Palmer at 14:32