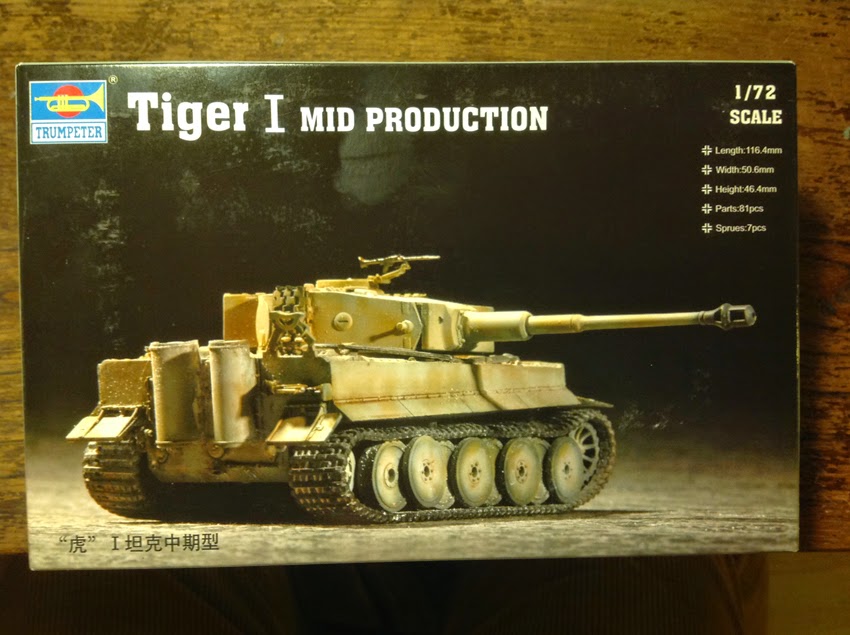 The Trumpeter JagdTiger, my first model by this Chinese company certainly made me a fan of the brand, and this, my second kit by them has, in the main, confirmed my love for this manufacturer. The next few pics show what you get in the box. 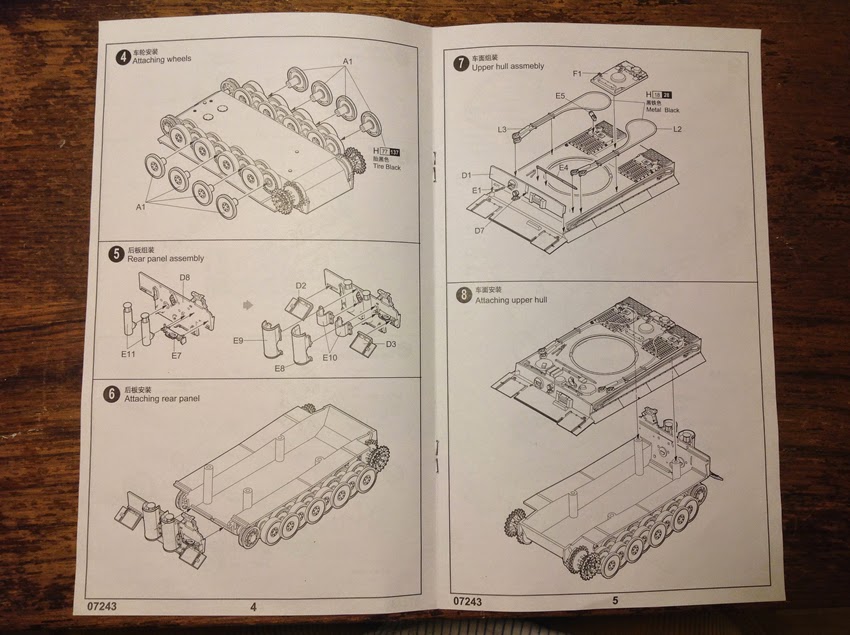 The instructions are very good, and come as a [?]-page booklet. 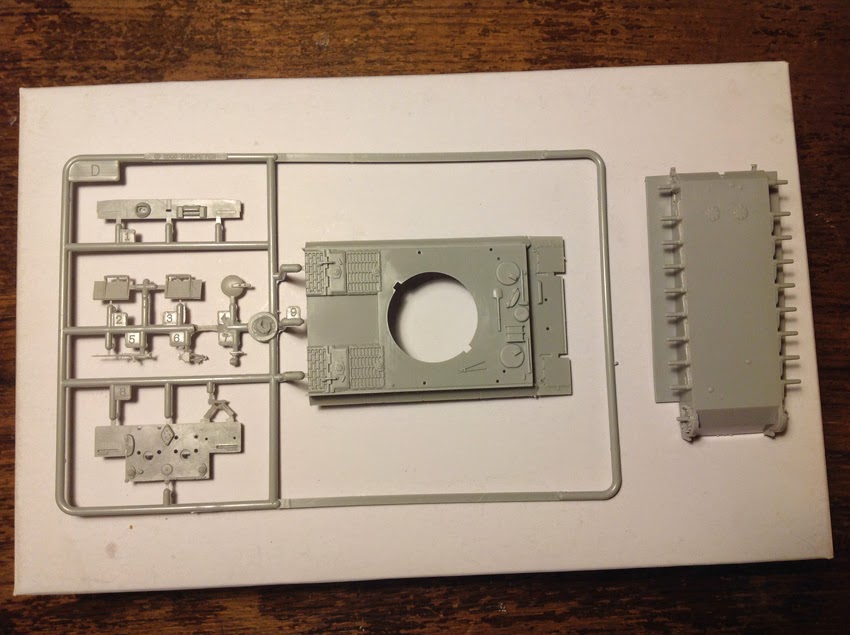 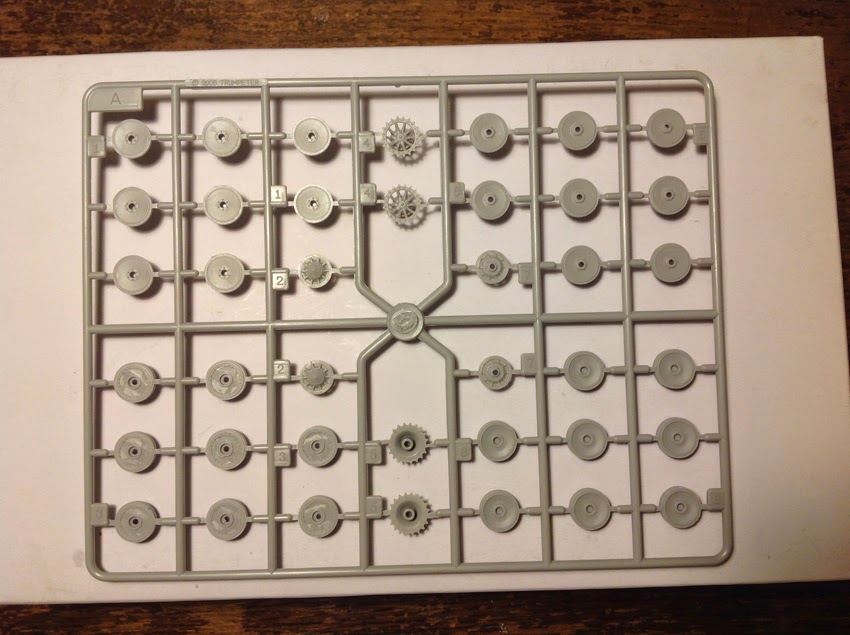 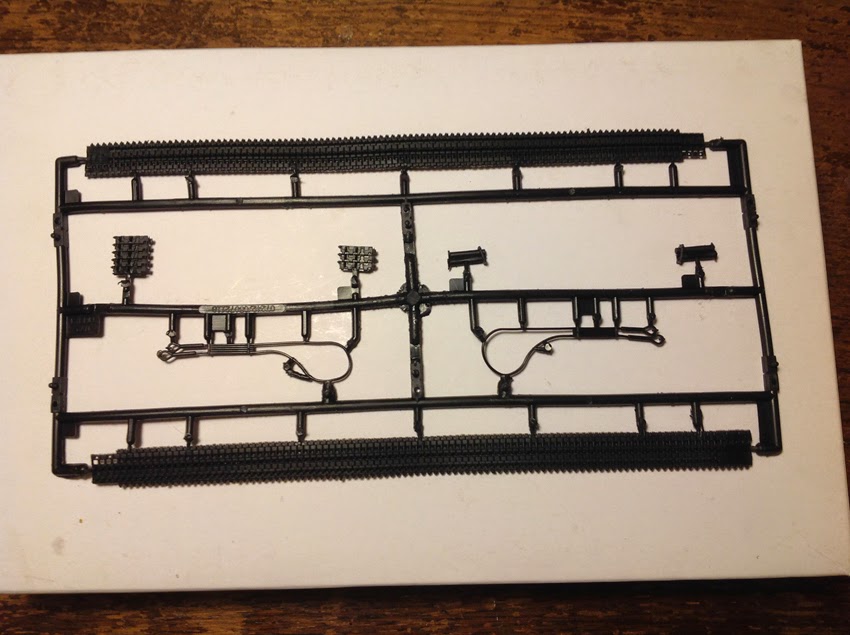 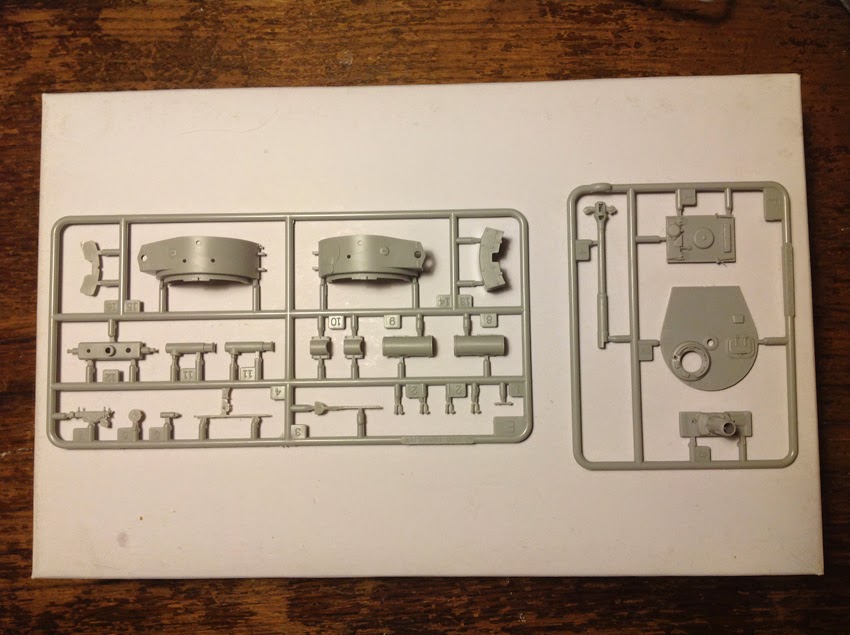 After building the Zvezda early-production model, this and the Dragon late-production Tiger I were always going to make for a fascinating insight into how three different companies approached a very similar vehicle.

As is fairly typical in small scale armour builds, the chassis and running gear come first. In this instance the differing thicknesses of the various runs of road wheels, beautifully crisply rendered and cleanly cast, made for an intriguing difference from the Zvezda early production model, with its sets of four-in-one wheels, cast as complete sections. 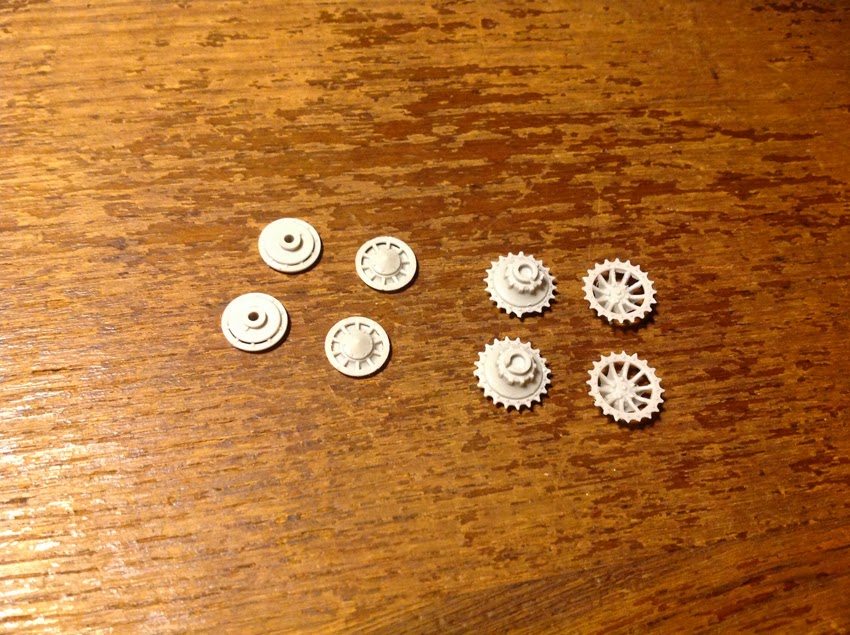 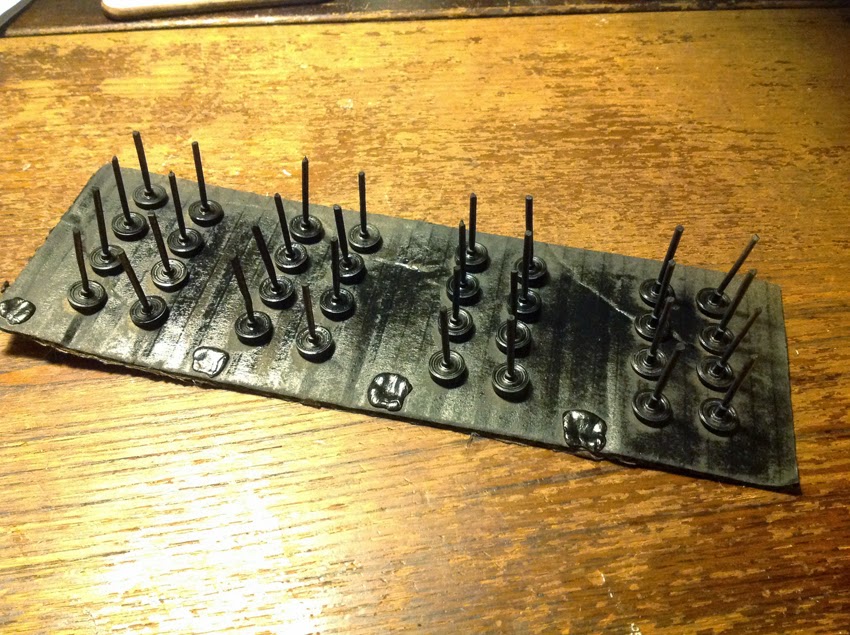 So beautiful were these elements of the model I determined on approaching the build in a new manner, and decided to paint the wheels before assembling them, which entailed setting up the 'forest of mushrumps', as pictured. 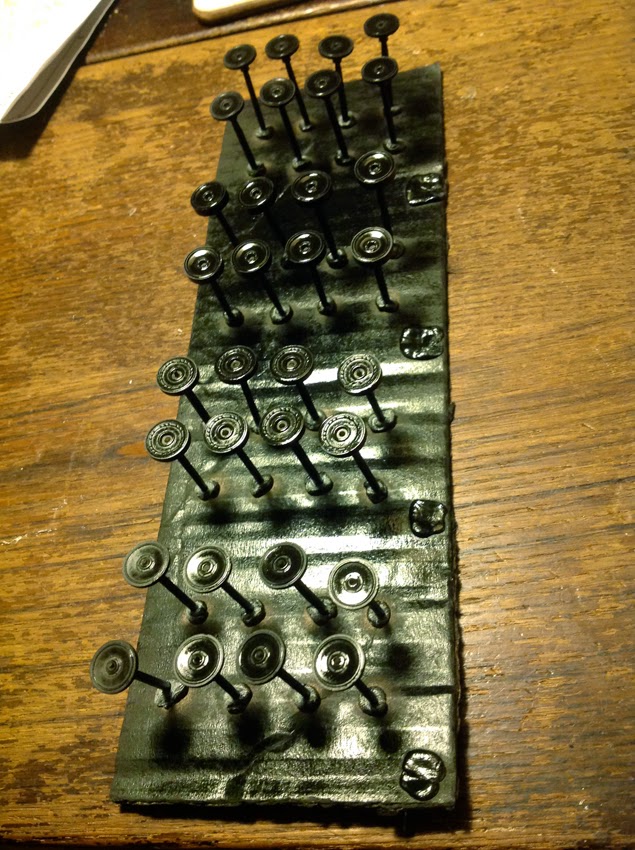 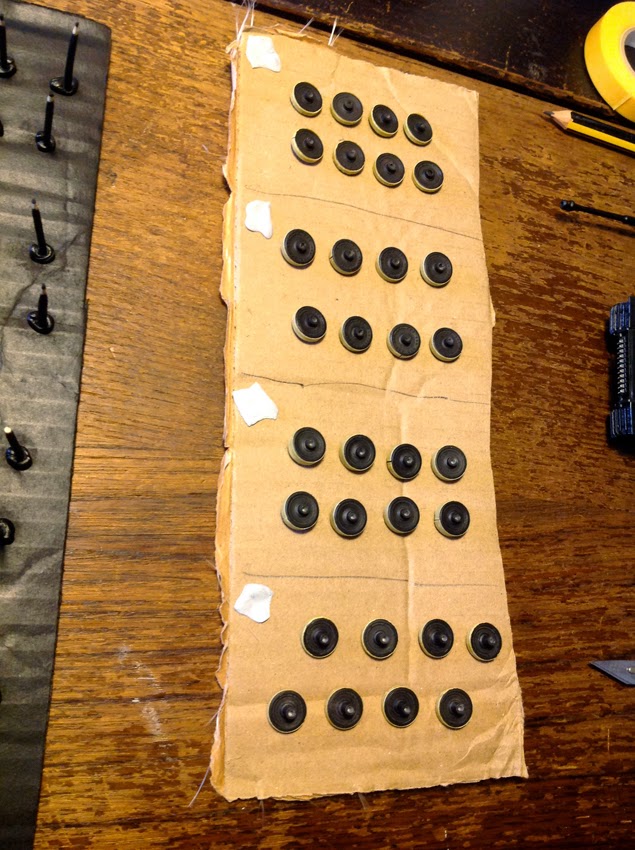 Masking off the outer surfaces of the road wheels, in order that they might, I hoped, remain black when i spray the dunkelgelb base-coat on.

The tracks are, as the instructions proudly proclaim, good for both gluing and painting, in the normal manner. I.e. not the kind of rubber band horror show that you get with a model such as the Airfix Panther (my first model on returning to the model-making hobby). As well as the basic tracks, the black rubbery 'sprue' contains two sections of additional track, designed to be added to the turret, doubling as both spares and additional armour, and also the tow cables (and even a couple of unused parts, whose function I don't know).

This black rubbery stuff does, as already mentioned, set with styrene glue. But it requires longer to fix than the ordinary styrene of the rest of the kit. And similarly, whilst it does take paint, the paint will come right back off again with any handing. 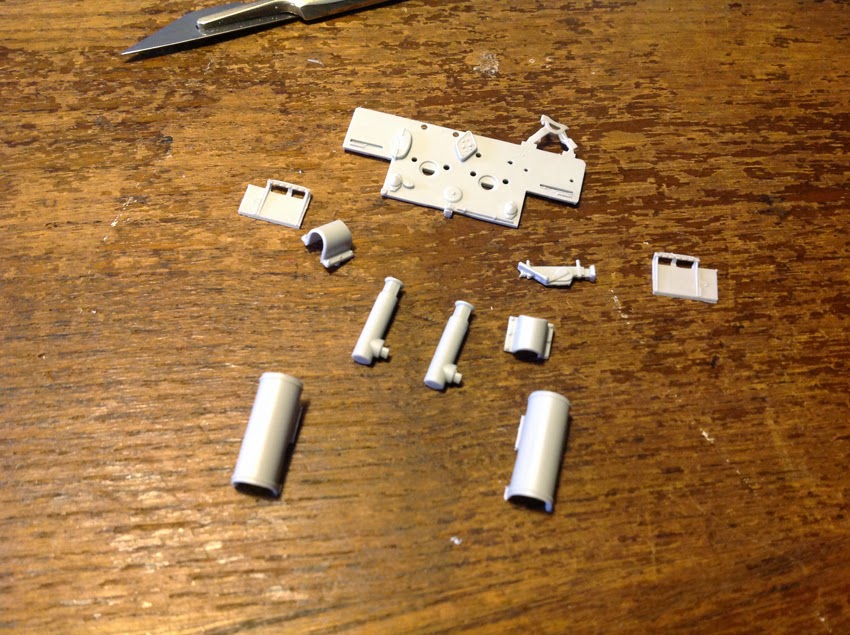 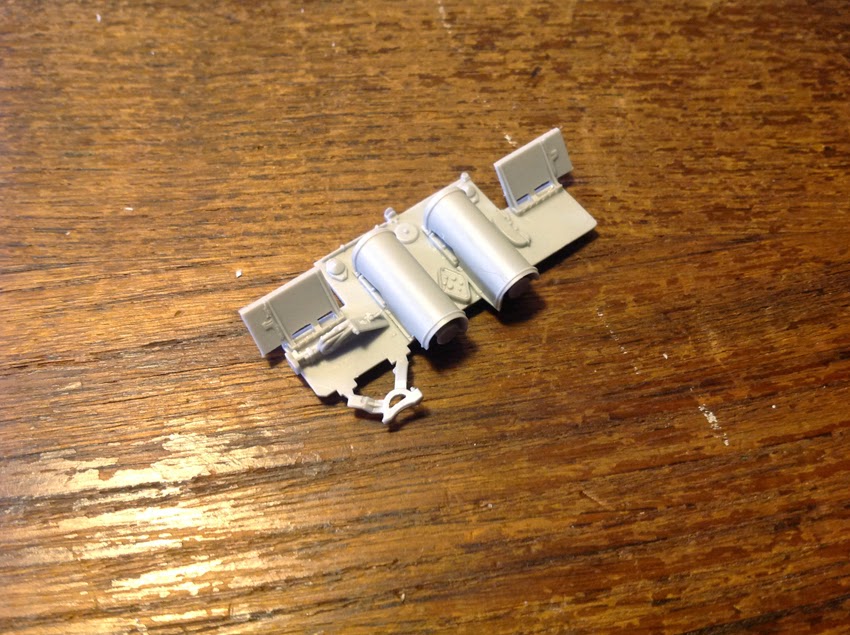 Whilst this is, overall, another terrific Trumpeter model, there are one or two points that count against it. The biggest of these is the fact that the grilles at the rear of the vehicle are not fully open, but simply recessed. Side by side with the Zvezda early-production and the Dragon late-production the grilles on the Trumpeter look pretty poor. 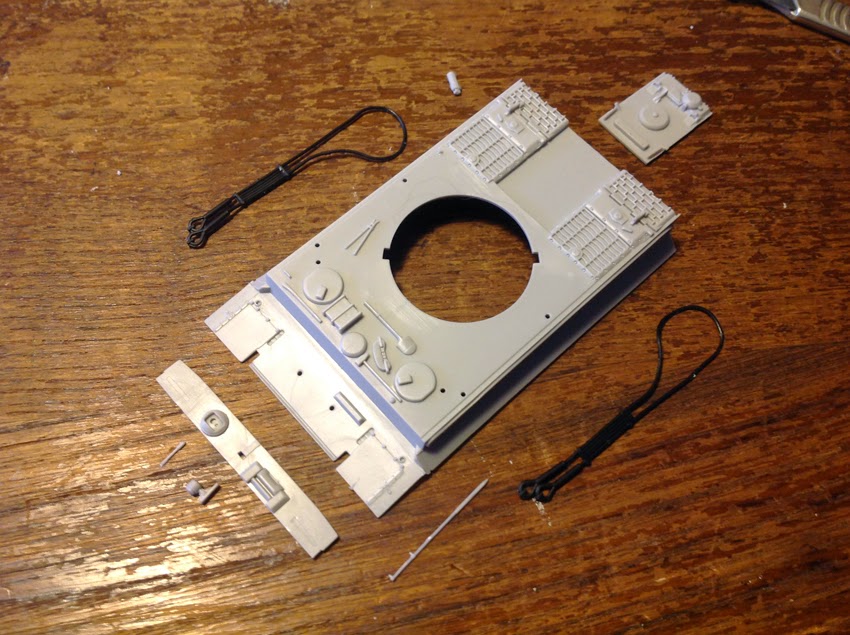 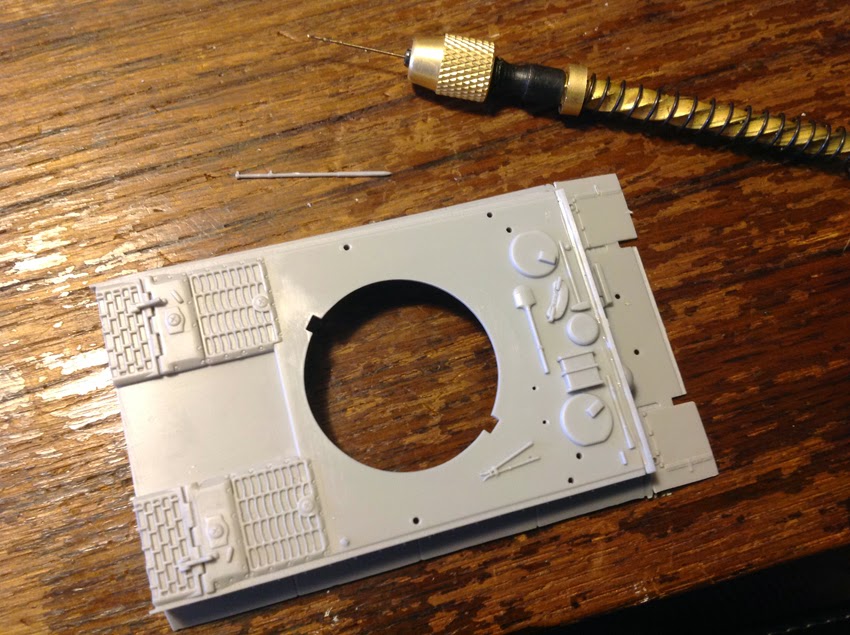 Opening some tiny holes for one of the few add-on tools. Note that the rear grilles are not, alas, open. 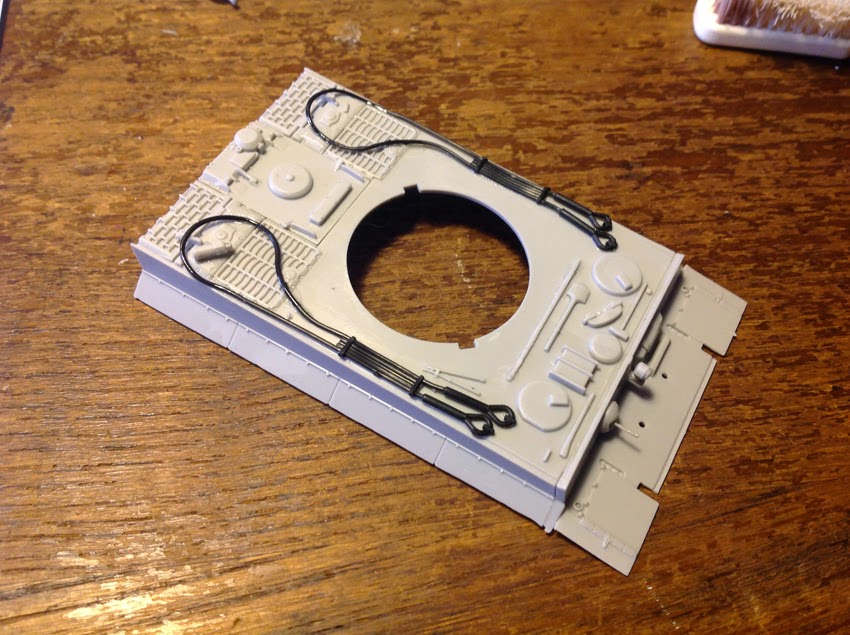 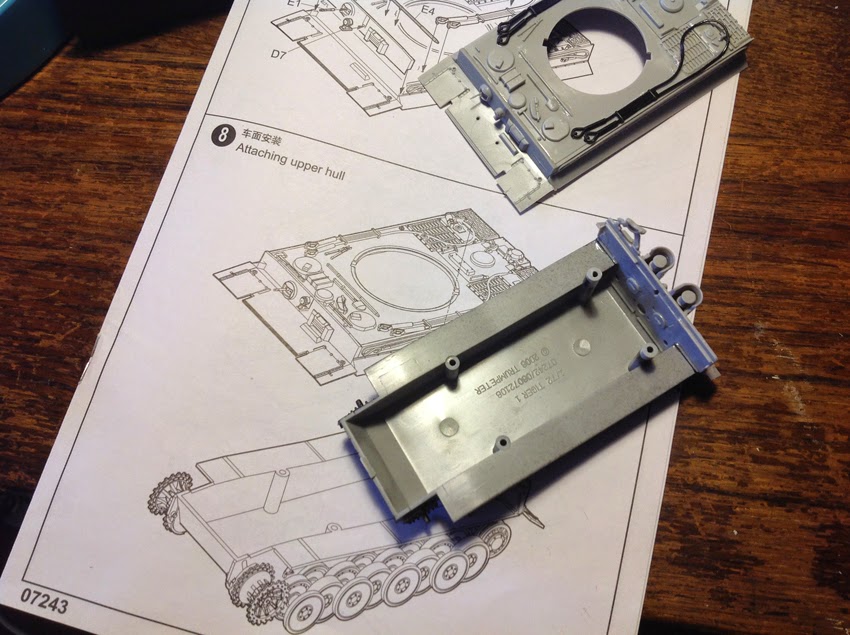 The upper hull has a kind of clip that needs to be removed. It's not visible on the part in the instructions. 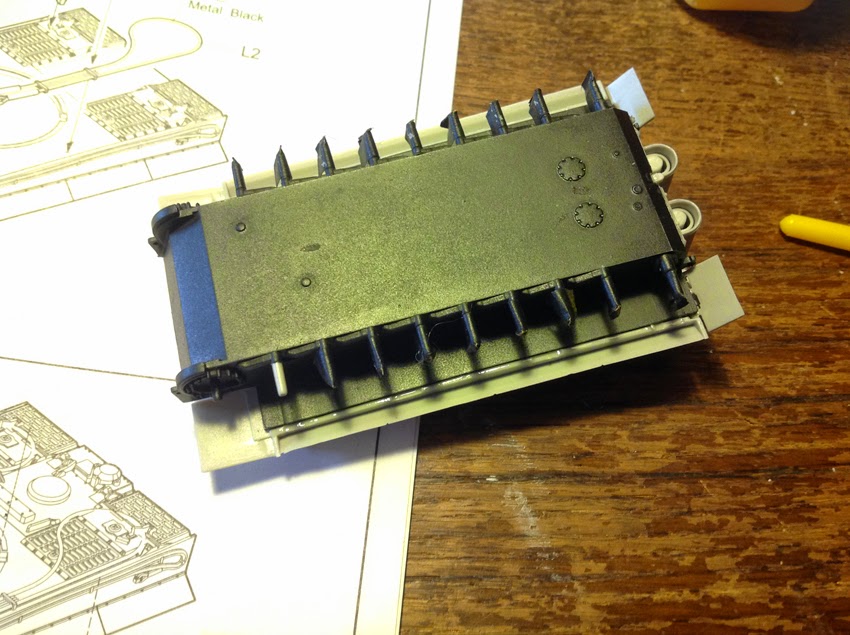 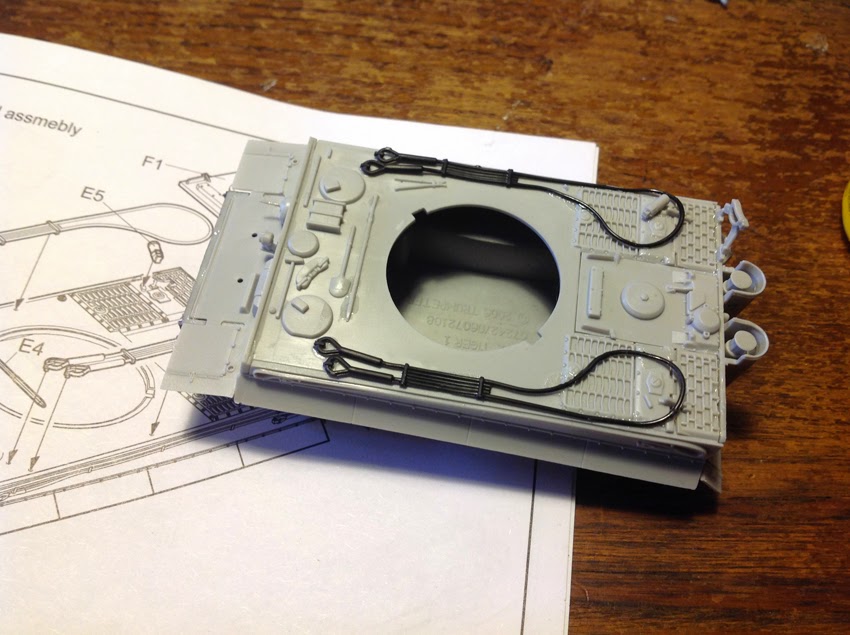 The hull comes together. 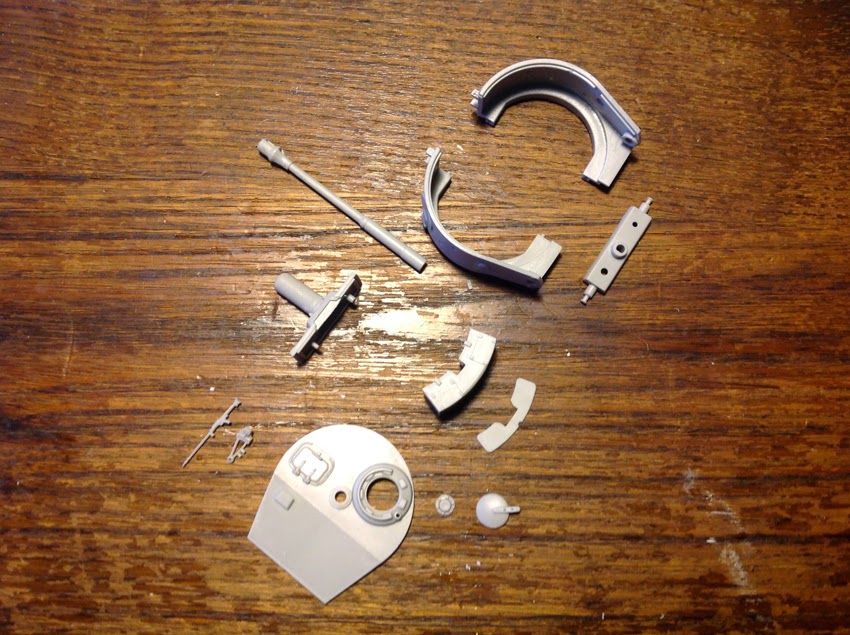 The turret assembly begins with cleaning all the parts. In the end I left the turret-mounted MG out. 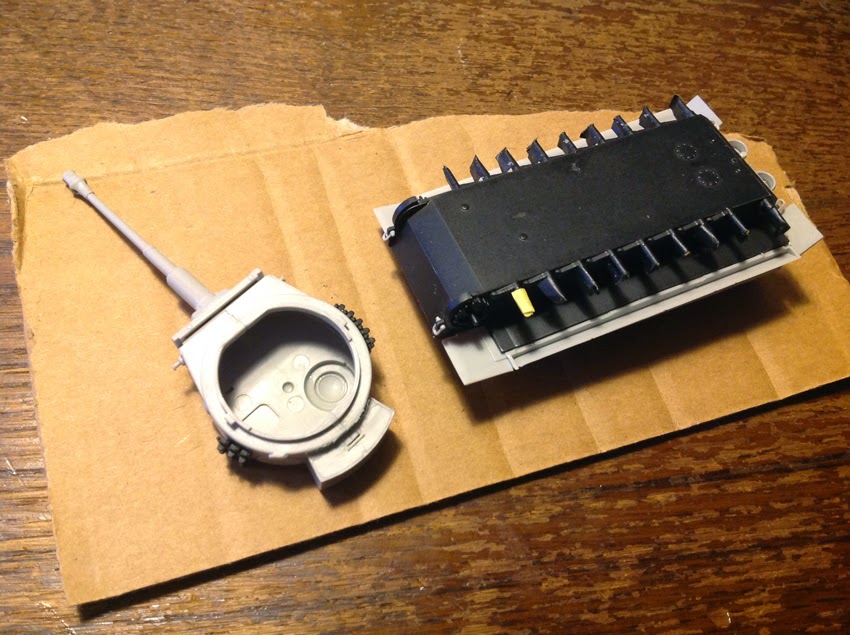 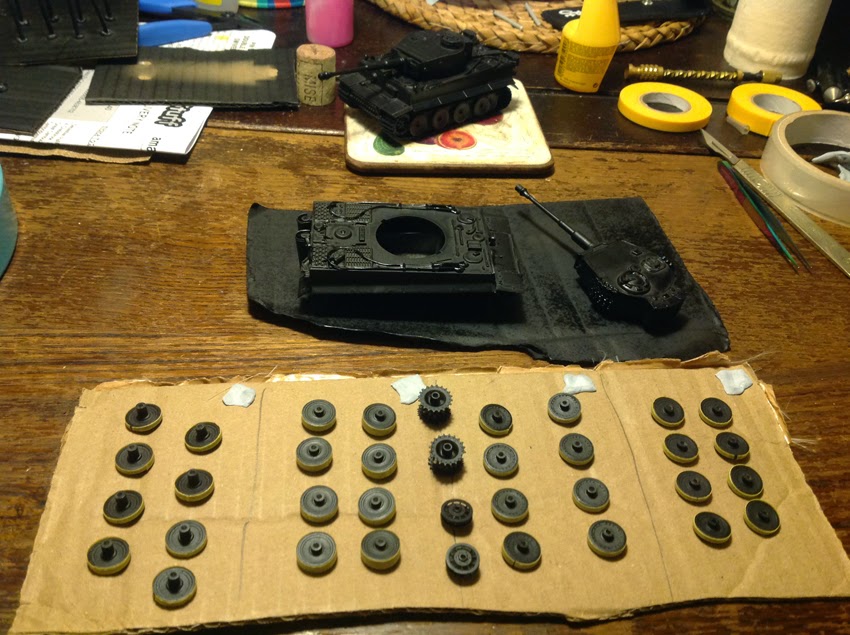 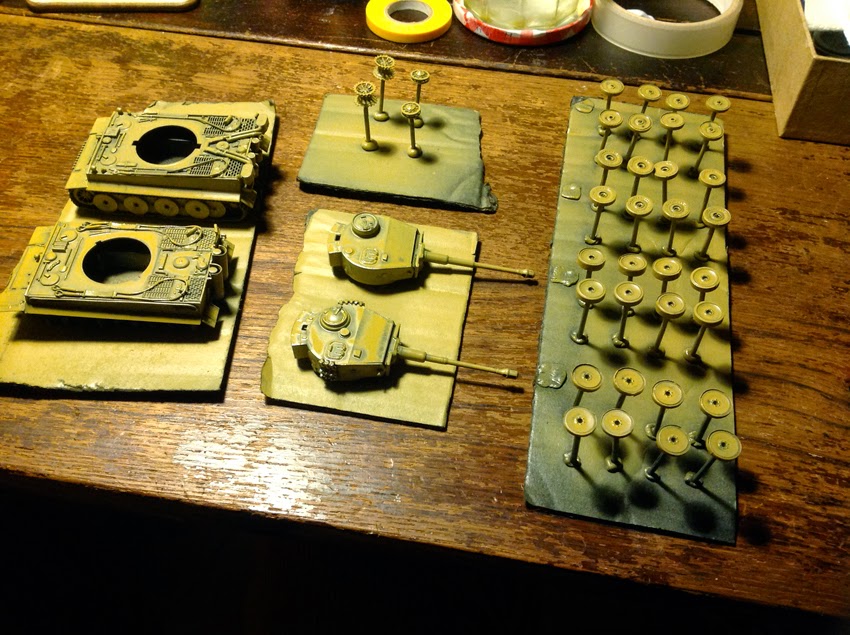 I used one of my own Humbrol enamel mixes to airbrush the colour on. The same paint, sprayed in the same way at the same session, reacted slightly differently on each model! 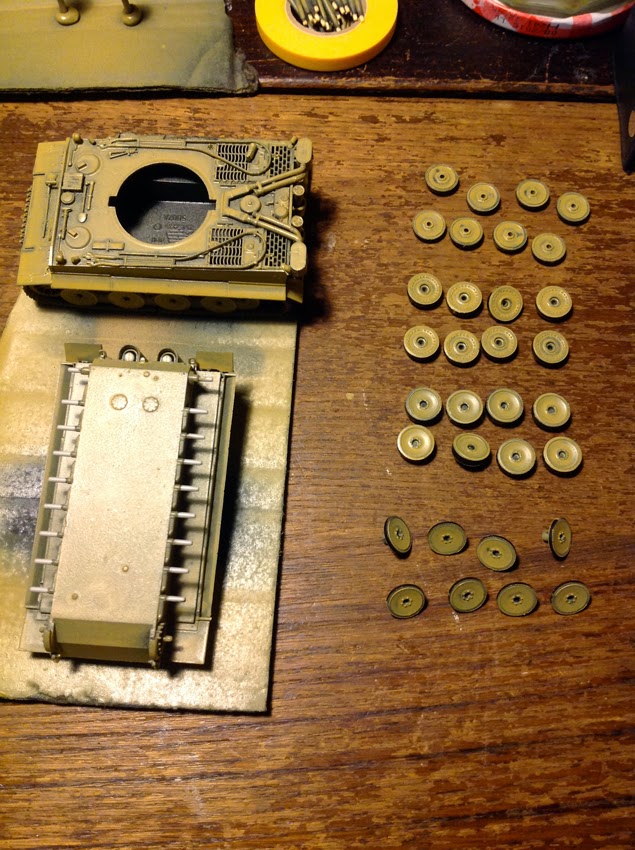 Peeling the Tamiya masking-tape off the wheels and seeing the black re-emerge was fun! 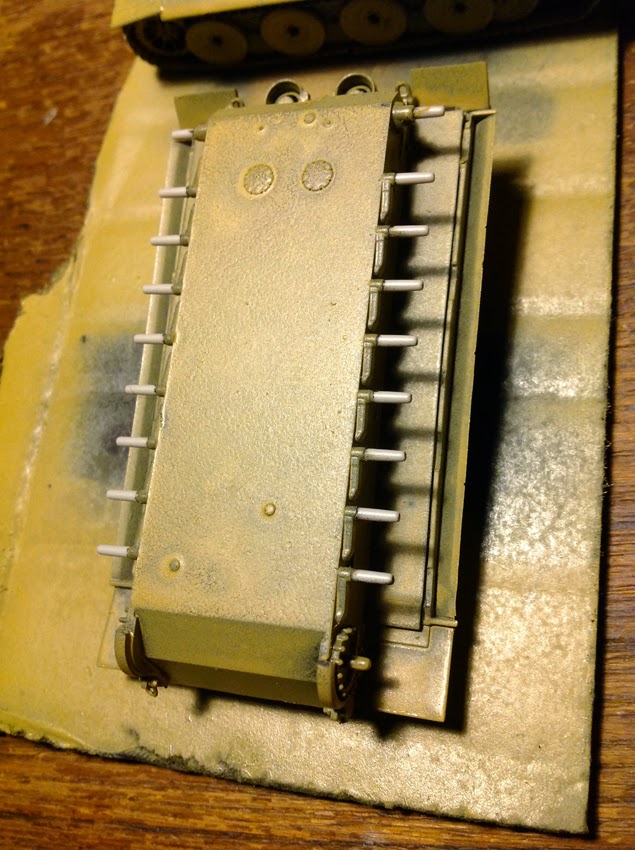 And the tape also did a sterling job of keeping the axle pegs clean as well. 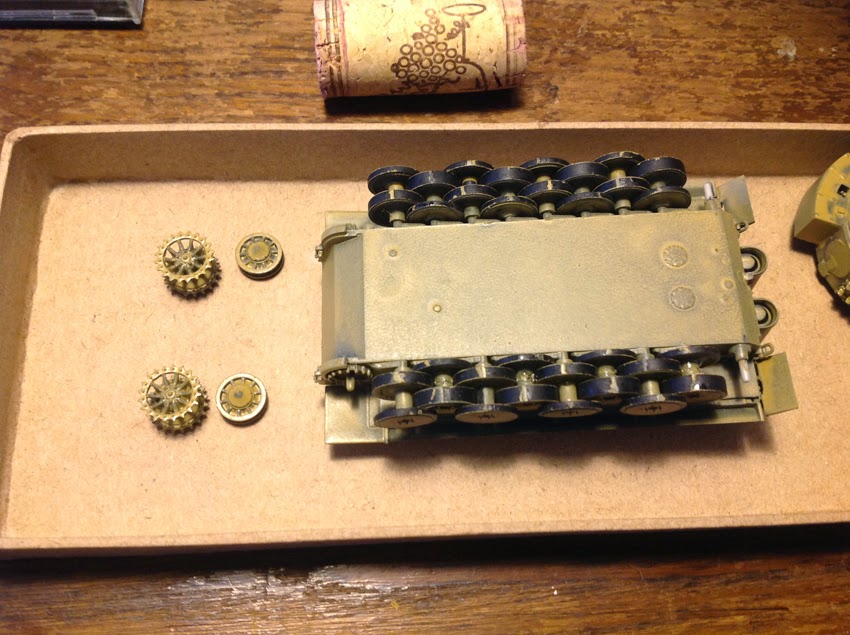 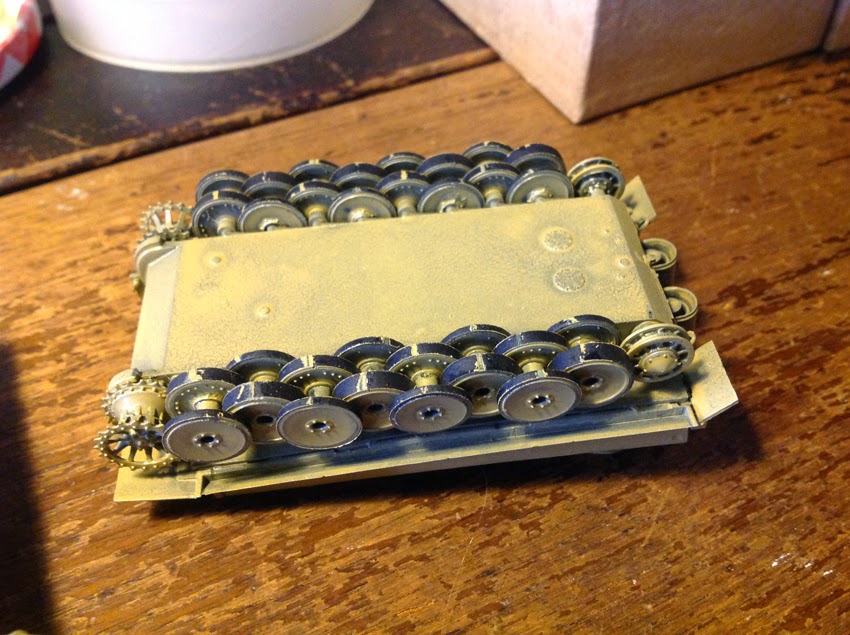 This pre-painting approach, prior to assembly, was a new departure for me. I enjoyed doing it, labour intensive as it was, but Im not sure I'll repeat the process very often! 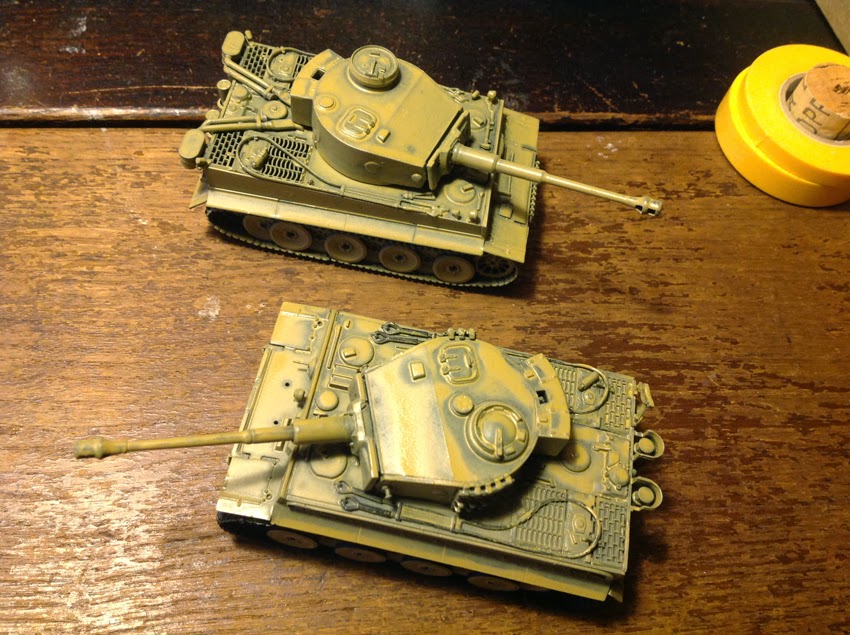 It's a pity the rear engine deck grilles on the Trumpeter aren't open, as they are on the Zvezda. The open look is so much better! 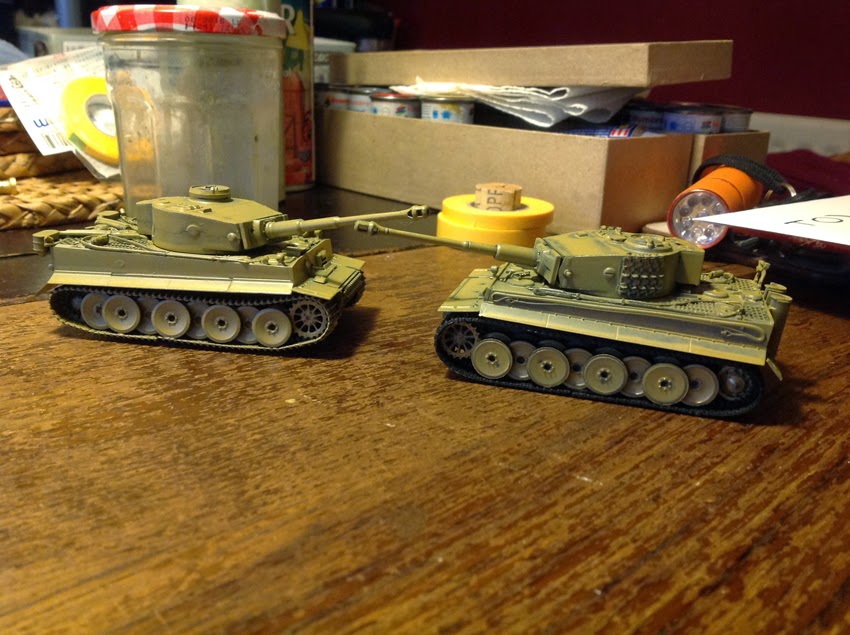 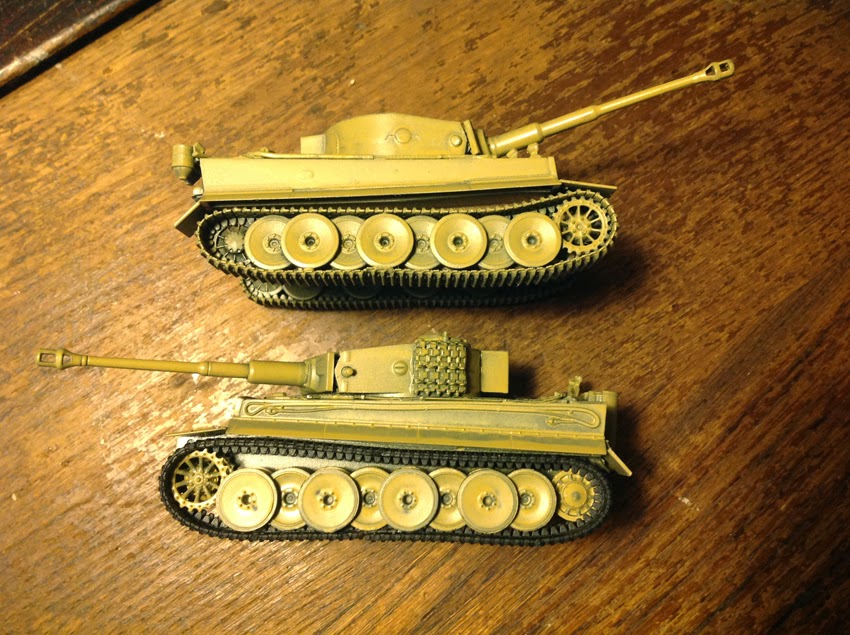 The Zvezda snap-fit tracks hug the running gear in a pleasing manner. The Trumpeter tracks will need cementing in place later.