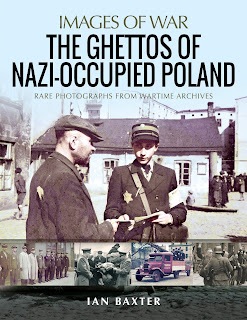 As someone who literally loves the uniforms, equipment, materiel, and quite often even the combatants and their stories, the whole racist/fascist aspects of the Nazi regime are anathema to me. It would be beyond churlish, in my view, to even attempt to downplay, ignore or worse still deny or support those aspects of what was an appalling ideology.

Having said that, for the most part I do separate the two aspects: the fascinating military machine/history, and the contemptible visions it was employed in furthering. In the same way I could happily assemble both sides of American Civil War forces, or, for that matter, English Civil War armies, without declaring allegiance to any of the views espoused (or not) by the combatants.*

With those thoughts in mind, what of this book? Well, thus far I haven't read much of the textual content. Instead I've just studied the many interesting images and read the captions for them, and occasional parts of the text, like the short intro/aftermath segments. In some ways, whilst the underlying segregationist concept is, to me, awful - if not as unusual historically as some might suggest - what strikes one most, at first glance, is the ordinary everyday banality of much of it, street scenes and people milling about, even markets, policemen, firemen, postal workers, people working in factories, etc. 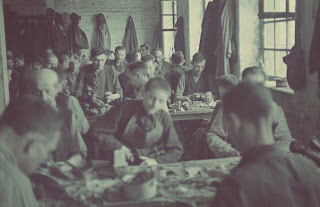 But this disguises, now as it did for the Germans back then, including perhaps those who took most of these photos, who might've look at some of these images and fooled themselves they weren't being all that bad, several key things: first and foremost these weren't ghettos 'naturally' formed, so to speak, by ethnic groups choosing to congregate, as many around the world to this day remain. They were government enforced relocations, and part of the more sinister so called 'cleansing', i.e. institutionalised genocide. Aka the infamous 'final solution' to 'the Jewish problem'.

And whilst the Germans, lovers of bureaucracy and form filling, list-making and so on, did create the semblance of normal institutions within ghettos, these were token gestures, beneath which racist contempt saw them utilise the Jewish population as a disposable low-maintenance workforce. Those who weren't dying of starvation, or diseases like cholera, typhus, and so on, would be working in German industries, mostly towards the war effort

This photographic study concentrates mainly on the ghettos as photographed, on the whole, by a number of German servicemen. Some of these collections of photos only surfaced in fairly recent years.  And, unusually for a WWII Images of war title they include a segment of colour photographs. 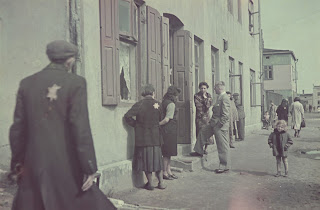 One of a number of colour images. Biebow visits Lodz.

Ghettoisation - Jews** are removed from their homes and relocated, mostly by train, but also on foot. This section also has numerous pictures of german 'brass' and functionaries, like Hans Biebow, a businessman turned Ghetto administrator.

Life in the Ghettos - This is, at first glance, the most apparently humdrum chapter. But the banality belies the underlying brutality, as the casual littering of corpses occasionally reminds the viewer

Liquidation of the Ghettos - as ominous as it sounds; this is the segment that, inevitably, depicts - even if only in a few shocking images - the most brutal part of the Nazi war crimes process, the wholesale butchery of unarmed non-combatants.

The Warsaw Uprising - Another brutally bleak chapter in this sad story sees the largest of the ghettos rise up, only to be mercilessly crushed.

The book ends with The Aftermath and two appendices. The first lists major Polish ghettos (but by no means all of them), many illustrated by single photos, and the second and last says a brief word on the infamous Reserve Police Battalion 101, who were instrumental in facilitating Nazi policy in these tragic times.

Personally I think it's very salutory to remind oneself of the reality and the enormity of these crimes against humanity. Their scale beggars belief, and their proximity in time should be a warning against complacency. On a European tour with a band I was once in, our Dutch tour bus driver took us to a transit camp in, I think, Belgium. To stand in a place of that type - not even an extermination camp - and think how whole categories of humans were treated as disposable trash, was a very powerful experience.

Note on photos: the two colour photos I've used here - so washed out they almost look black and white - are, like a number in the book, from the USHMM, or United States Holocaust Memorial Museum.

* It's worth remembering that many soldiers are not primarily fighting for the causes their leaders say they stand for. Many just fight for their nation, homes and families, each other, or simply to stay alive.

** And, let's not forget, other so called 'undesirables', such as leftists, gypsys, homosexuals, and so on. But obviously, as per the title, this book concentrates on the Jewish aspect of Nazi persecution, it being the largest and primary 'out group'.