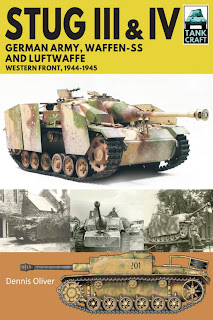 Another excellent addition to the very useful Tank Craft series, from the ever-reliable Dennis Oliver.


Oliver has his own preferred format for these that differs somewhat from that usually adopted by other authors contributing to this series, deploying unit histories and schematic diagrams. In this 19th instalment of the Tank Craft series Oliver covers the Stug III & IV, and even then only really looks in detail at their deployment and use on the Western-Front in the last two years of the war, 1944-45. I hope there'll be more titles covering their service elsewhere forthcoming? As Stugs were the most produced German AFV of the war, and served in all theatres throughout the whole shebang, '39-'45.* 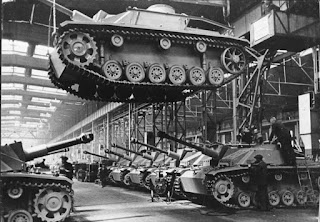 
One of the chief attractions of these books are the colour profiles, presented here under the heading 'Camouflage and Markings'. And in this instance we have 11 pages of these, depicting 19 Stug III, and three Stug IV, all illustrating vehicles serving in the aforementioned theatre/period. The 'Model Showcase' section features one Stug IV, and two Stug III, all in 1/35 scale. One minor gripe with the whole Tank Craft series, especially so for me as someone who builds almost exclusively in 1/72, is the rarity with which this scale is represented in the Showcase segments. This said, 1/72 kits are featured, alongside other scales (1/76, 1/48, 1/16, etc) in the usefully informative 'Modelling Products' section. 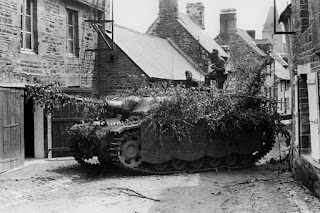 
As already alluded to, their remains much of the Stug's WWII story to be told, so I hope more Stug volumes appear in due course. They'd be even better if they were to include some 1/72 kits in the Showcase section. I have four or five Stug models, and intend to paint them for theatres such as Italy and Russia, as well as the Western Front. But even with this tight focus on one theatre and a limited time period, this remains an excellent and, I think, essential reference for modellers and wargamers, etc. 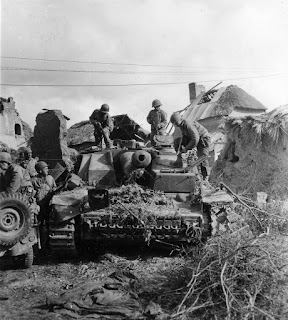 This wonderful photograph does not appear in the book. [3]

[1] This picture appears in the book. My version, and the caption below, are both sourced from Wikipedia's entry on the Alkett factory.

[2] This image appears on the cover, albeit in a small/cropped form.

[3] That said, many of the images of the late war Stugs covered by this book are, like this one, either destroyed, abandoned and/or captured.
Posted by Seb Palmer at 23:59