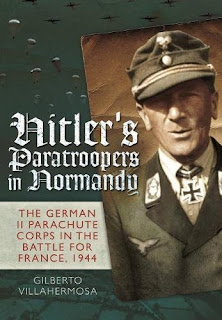 This excellent book is a compelling and fascinating account of Hitler's Fallschirmjagers in their latter-war role as elite infantry defenders, as opposed to their early-war role of airborne attackers, and more specifically the part played by II Parachute Corps in the Normandy '44 campaign.

Numerous actions are covered, ranging from the better known, such as the rather muddled loss of Carentan and the more determined defence of St. Lô, to the more obscure, such as St.-Côme-du-Mont, Hill 192 and the defence of Sainteny/Sèves Island. The largest actions are the siege of Brest and the encirclement and collapse of the Falaise pocket. 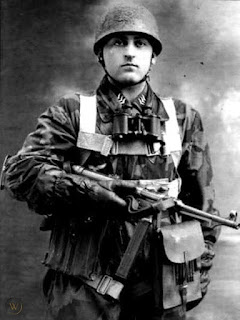 In all these events the primary focus is on the involvement of the fallschirmjager, with a secondary theme being a look at their leadership, in figures such as Ramcke, Schimpf and most particularly Eugen Meindl. In a book written by a modern American military man about German soldiers who were fighting, for the most part, his own countrymen [1], author Villahermosa is admirably balanced in his treatment of his subjects.

The maps, grouped together at the beginning of the book, could've been better. Some are nigh on illegible. Standardising the design and image quality of the maps (whilst some are pixellated and poor, others are very clear), and having the appropriate maps nearer the pages where the actions are related, might've improved the readers chances of following the often geographically challenging scenarios. 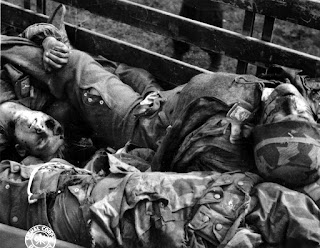 Whilst there are copious footnotes to sources, and a list of equivalent U.S. and WWII German ranks, there's no glossary. It's my firm belief every specialist book in our niche areas of interest ought to have one! There are even a few instances of quotes being repeated/recycled (in one instance identical words being attributed to two different German commanders [2]), and some minor editorial mistakes.

But overall it's an excellently balanced and exciting account. Very well written in the main, it also appears to me (admitted enthusiastic amateur that I am) well constructed and researched. The more I read on this theatre, the more it strikes me that the German's were in the grip of a 'Lost Cause' mindset comparable in some ways to the Confederates in the ACW: fighting for a morally bankrupt racist vision against an enemy of vastly superior resources in men and material; their ultimate defeat looks, both at the time and in retrospect, inevitable [3]. 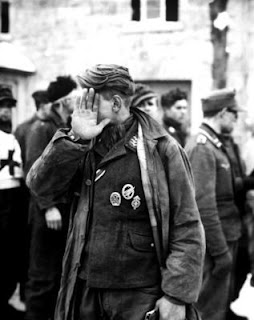 Nevertheless, as Villahermosa documents, what fragments of these units survived the fairly cataclysmic defeat in Normandy were recycled and reorganised, and continued to fight in Holland, Belgium, Germany and elsewhere. The frankly appallingly wasteful loss of life, limb and property, visited not only on combatants but also the picturesque landscapes and people of Normandy and elsewhere is obviously terrible. But it makes for very compelling historical drama!

I loved reading this book, and would highly recommend this to those interested the Fallschirmjager, their leaders, and this period/theatre of WWII.

[1] Mention is made of the other Allies' involvement (British, Canadian, Polish, French) where appropriate. But in the main this is U.S. vs. Germany. Mention is also made of the German use of Ost-truppen and other foreign elements.

[2] I meant to note where this occurred, but didn't, and can no longer locate it. But, in fairness to the author, it's not representative of the solid writing throughout, so I'm not bothered, frankly.

[3] And, of course, many Germans were fighting more for their comrades and homeland than Hitler's racist agenda. But Villahermosa doesn't dodge the fact that, like most German elite forces, such as the SS, being an ardent Nazi was both more usual and approved of in such organisations. Ramcke, for example, inordinately vain according to his British jailors, is described by the author as a 'fanatical, diehard Nazi, hard-core anti-Semite, and blatant racist.' Sadly for all involved, the Germans, and especially those most in thrall to Hitler's mania for the 'triumph of the will' concept, were those least able to see the inevitability short lifespan of the supposed Thousand Year Reich.

* Sometimes I illustrate my posts with pics from the book under review, and sometimes with pics not found in the book, occasionally using both. In this instance all the images I've used are also in the book.