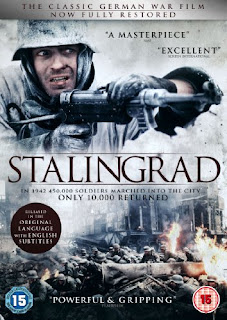 I first saw this film in an execrably dubbed version, several years ago. Because my memories of that weren't good at all, I hesitated over buying the 'fully restored' version. But I'm ever so glad I did. It really is superb.

The film tells the story of a group of soldiers who we meet on leave in Italy, 1942, after their return from active service in North Africa. Most of the key characters whose fate this film charts are at a beach, looking after their former platoon commander, who is a near basket-case, wheelchair-bound and raving. Late for a medal presentation parade, they meet their new commander. They don't all get off to the best of starts. 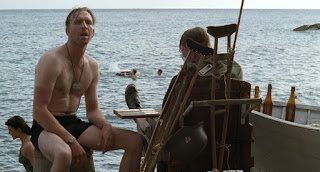 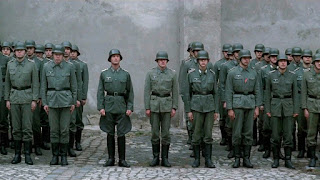 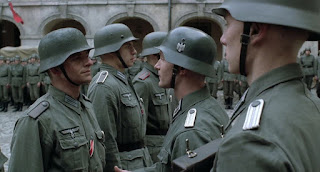 All of this sets up the film for the groups arrival at the front, where they immediately see all is not well, as they pass hordes of wounded who are clearly neither happy nor well attended to. Leutnant Witzland tries to protest when he witnesses the maltreatment of Soviet prisoners, but is laughed off by a creepy senior office in specs, Hauptmann Haller (Dieter Okras), who we'll see more of later. 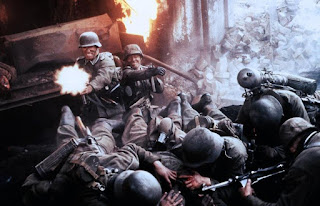 The Germans attack the factory. 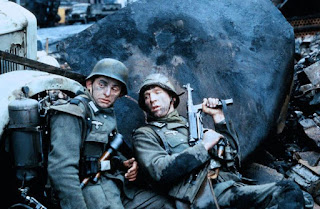 Fritz, none too pleased to be carrying the flamethrower, by the looks of it.

At this point, after Witzland meets the brass (during a prayer meeting!), the movie moves into the combat zone proper, with a fierce and bloody attack on a factory complex. I personally think it's supremely well done. Gear nuts and uniform fetishists - and let's face it, how many wargamers and modellers aren't both? - will love the authenticity of the costumes and materiel. [1]

Things then get, and remain, very brutal. The soldiers we are following soon find themselves cut off, and a small group enter the sewers to try and connect with their parent unit. I'll leave off the narrative exposition at this point, since, as ever, I don't want to spoil things for readers who haven't seen the movie as yet. What I will say is that the soldiers we are following find themselves in plenty more tight spots, and there's a good deal of footage showing the winter biting hard, including another superb combat sequence. 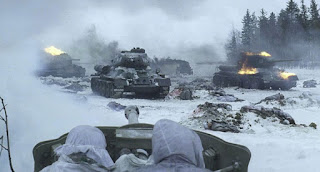 A Pak 38, small arms, and magnetic mines, against T-34s and Russian infantry.. 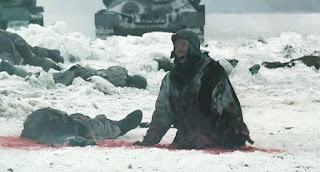 Vilsmaier doesn't spare us any gore. 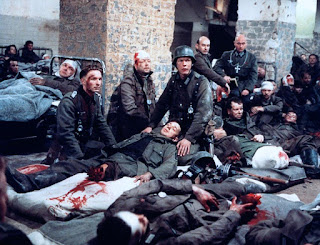 During their jolly jaunt in the subterranean sewers - one of several stunning locations - Edgar Emigholz (Heinz Emigholz) is severely wounded. The group attempt to get him treated at an understaffed hospital... 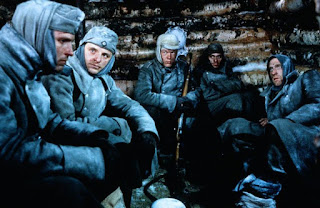 Vilsmaeir's wife plays the only female with more than a minor role, as a Russian soldier whose path crosses with our group on several occasions. The film is very good in that, although we follow the Germans, it doesn't really take sides, but simply shows the conflict in all its bestial intensity. We see plenty of Russians, and their civilian population, and the Germans range from humane and heroic to barbarously brutal, with many of them simply enduring their suffering in mute disbelief, as do all parties. 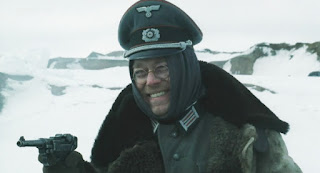 Whenever the odious Hauptmann Haller appears, you know it's not going to be good. 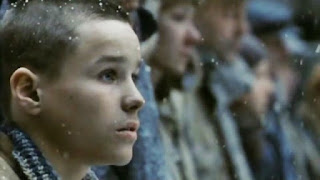 We first meet a young Russian kid, Kolya during the factory battle episode, after which he appears to abscond in the confusion of battle. Then, later, we meet him again.

This film doesn't really seek to address Nazism as such, except in one or two very brief moments. But there are many other films that do explore that issue. This film, like Das Boot [3], doesn't set out to examine that subject so much as the fate of the ordinary man, as a soldier, caught up in something appalling, and, very largely, out of their control.

Having said this, Stalingrad doesn't duck the issue of complicity in inhumane atrocities, with one particularly gruelling scene forcing the men we're following to dirty their hands irretrievably. 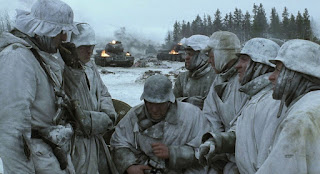 After the snow fight... 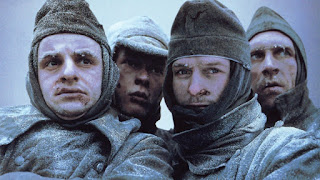 All in all, superb. And thank goodness there's now a decent subtitled version, so we can experience this film as it was intended to be seen.

The most important thing when watching this movie is, I feel, to get the right version. I think the dubbed version is nigh on unwatchable, turning a superb film into a (frozen) turkey. In case it helps, the new version, pictured at the top of this post, is copyright 2014, says it's 'fully restored', and makes a point of mentioning thats it's in the original language, with subtitles.

The one to avoid, at least in the form I have a copy of it, has a cover more like the image shown below. Not only do the dubbed voices sound disembodied, but there are no subtitles for the expository texts, or the moments when Russian is spoken, or even the speech by Hitler that the soldiers listen to on the radio after the battle for the factory. 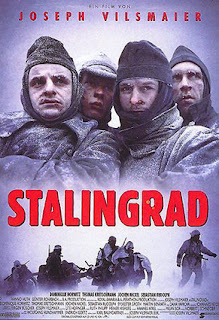 [1] There's an interesting wiki type website here that lists the weapons you can observe in the film.

[2] From the apparently earnest Saving Private Ryan, or the HBO Pacific mini-series, to the more overtly wish-fulfilment fantasies of Fury or Inglorious Bastards, it cannot be doubted that some viewers will get off on the violence depicted in war films.

[3] The older of my two versions claims Stalingrad was made by the same production team that made Das Boot. The newer version doesn't make this claim/connection. I glanced at production credits for both films, and couldn't see Vilsmaier named in the Das Boot credits. Does anybody know who, if anyone, worked on both? 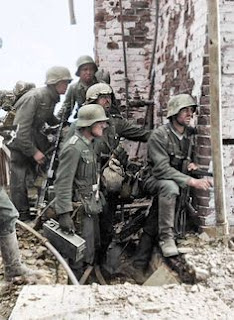 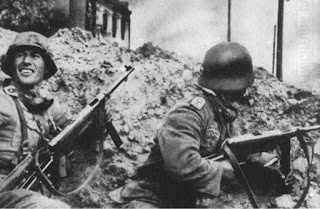 ... Stalingrad pays a moving tribute to all who suffered in this infernal cauldron.