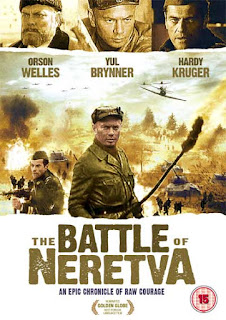 It's great that nowadays we can now get hold of films from Eastern Europe and what was once 'behind the iron curtain' pretty easily. I recently enjoyed the five film Russian epic, Liberation, and I also have the legendary Come & See in my pending pile.

Battle of Neretva is a multinational effort, released in 1969, about Yugoslav partisans under Tito, and follows the fate of these Communist guerrillas as they fight the Germans and their various allies, who include Italians and Chetniks. 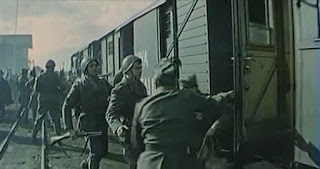 There's a great scene near the beginning of the film showing numerous italian troop types disembarking from a train.

In some ways this film suffers from propagandistic oversimplification, markedly more so than the Soviet Liberation series. And yet it also shows both sides, sometimes even with a degree of equanimity. It certainly doesn't baulk at depicting the horrors of war, and inhumane acts are committed by both sides.

Orson Welles as the Chetnik Senator.

And in showing the Chetniks - lead by Orson Welles! - it reflects the ethnic and political divisions within a country that was made up of many nationalities, and was being fought over by even more nationalities, some indigenous, some not. The Chetnik army is mainly tribal cavalry, which is interesting to see.

Despite the poor transfer quality (from video!) [1], some pretty wooden acting, a soundtrack that - despite the film thankfully being subtitled [2] - has the feel of being dubbed, being rather long (and feeling it), and not being particularly smoothly constructed, in narrative terms, Battle of Neretva still has much to recommend it. 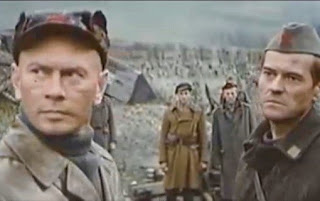 For starters there are a number of decent actors, some familiar to us (from the world famous Orson Welles and Yul Brinner, to what might be called the WWII famous, such as Curd Jurgens and Hardy Kruger), some not. Then there's the epic scale of it. And finally there's the story it tells, of a very multinational conflict in a theatre of war generally ignored in the Western movie tradition.

It's out of this latter aspect that the best aspects of the film derive: some of the mountainous landscapes, with patches of forest and ancient towns and villages, are really amazing, and much of the fighting occurs in daunting terrain, or appalling weather. There's lots of snow and mud! 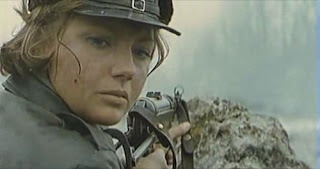 Women are active participants, which is interesting, as is the theme of the partisans looking after their wounded, including the 'typhus people'. Typhus sufferers are portrayed almost as one imagines medieval plague sufferers were viewed, as 'holy madmen', particularly in the character of Bosko. Aspects of the folkloric parts of the indigenous cultures - folksongs, costumes and dances - are also included, which is also interesting.

The uniforms and equipment are as diverse as the mixed ethnicities. Some will be annoyed by the use of Russian (and even American!) tanks as German - there a few tanks disguised (fairly poorly) as Tiger I's. But on the other hand, in terms of small-arms and artillery, it's quite impressive. The frequent use of Axis MG34/42 type guns in a mobile hand-held Rambo-like manner is quite something! 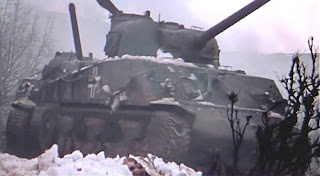 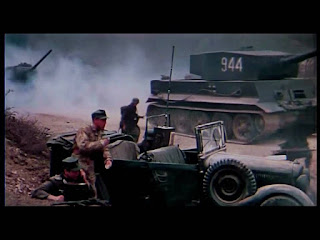 Not sure if the car is genuine Axis/German materiél. But at least they tried to disguise some of the T-34s as Tiger Is. 'Tis only a pity they didn't do more in that line.

The combat scenes are spectacular. No expense was flared, and large amounts of Russian armour and other vehicles were used. Many of the battles are odd in one way or another, for example with individuals duelling over long distances. But they are, for the most part, large in scale, pretty (sometimes very) exciting, and generally quite impressive, if not always entirely credible. There are also several non-combat set-pieces that are pretty stunning.

So, all things considered, a very mixed bag. Hopefully one day we'll see a better version, in terms of image and soundtrack quality. But it's an interesting film about an interesting and less well-known (to us) part of WWII.

Definitely worth checking out.

[1] When the DVD arrived I initially thought it might be a pirated copy, as the images of the stars - even those used in the cover montage image, but especially those that comprise the trio of 'portraits' atop the cover - looked grainy, as if they'd been photocopied!

[2] As with most Eastern Bloc/Eastern European subtitled films I've seen thus far, the subtitles aren't brilliantly done. They are, however, at least a lot crisper (and thus easier to read) than the film image itself!

[3] Slovenian actor Lojze appears on the right of the three cover portraits; under his picture German actor Hardy Krüger's name is given!
Posted by Seb Palmer at 09:14