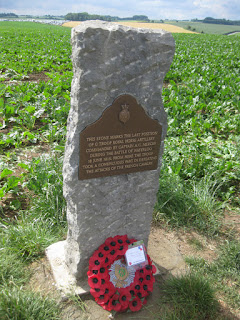 The memorial to Mercer and G troop RHA, at Waterloo, on the right of the British line, towards Hougoumont.

On our recent trip to Belgium - with Teresa (my stalwart wife!) - I took along several books, one of which was Cavalie Mercer's journal, in an abridged edition. Despite some issues with this book (which I'll address in due course) I loved it, and it made seeing the memorial to him on the battlefield truly moving. We think we spotted 'Paxo' nearby, and he was moving to!

When we got back, so much had I loved the abridged account, that I had to buy and read the full version. Both are printed by Pen & Sword, and both are lavishly illustrated. But beyond those similarities, and the obvious fact that both draw from the same rich well, they are quite different in one or two important respects.

The first thing I feel I ought to say is that Cavalié Mercer's memoirs are undoubtedly five-bicorne material: Captain Calvalié Mercer, who commanded G Troop of the Royal Horse Artillery in Wellington's rag-tag but victorious Allied army at Waterloo, wrote a terrific account of his experiences. The only reasons this gets just four of Boney's chapeau, and not the full five are, firstly, this is a very truncated rendering of his writings, and secondly, editorially this has been allowed to go to press littered with typos, of the sort that suggest the use of text recognition scanning software (e.g. frequent instances of 'hi' where it should clearly say 'in').

Having said this, I nonetheless really enjoyed reading this book. Mercer was - aside from the annoying typos that were in no way his fault - the perfect literary companion for our jaunt across to Belgium for the Waterloo 200th. The short extracts used here begin with Mercer leaving England (including some references to some parts of East Anglia and Suffolk we know!), travelling by sea and land to Belgium, taking part in the rearguard actions following Quatre Bras (where he glimpses Napoleon!), fighting at Waterloo, and then wandering the battlefield in a quasi-Romantic reverie.

Mercer is great. He writes superbly, and if his account is to be trusted - and it smacks of authenticity - he was also a brave and conscientious (if, by his own ready admission, not always perfect) soldier. He's both proud of his troops, and simultaneously both sensitive and yet somewhat inured to war. Reading his accounts of Napoleonic warfare really brings home both the excitement and the horror of such conflict. Mercer himself emerges from his own story a thoroughly likeable and impressive young man. As mentioned above, my wife and I stood on the very spot - as denoted by the small monument pictured at the top of this post - which marks the final position Mercer's battery occupied (it moved around a  fair bit, being horse artillery), and where it did it's bloodiest work, between Hougoumont and the Charleroi road. Having only just read of his experiences made this a truly poignant experience.

There's some interesting parenthetical stuff by a Victorian gent (who's name escapes me at this moment), who Carruthers quotes at length in the intro, on the nature of military history, memoirs, and Mercer himself, which is a useful adjunct. There are also lots of pictures, which, being rather randomly strewn throughout, add to the feeling that they and the title - splashed across both sides of every spread - function as padding. Having read titbits from Mercer many times in many books, reading him more fully here was extremely enjoyable, even in spite of the awful typos that litter this book like the dead and wounded litter the field of Waterloo in Mercer's sanguine account.

Good reading for a weekend away: great material, shame about the typos.

This is a great edition of an already brilliant story, which adds quite a lot to the memoir itself, including a biographical account of the whole of Mercer's life (placed before rather than after the Journal itself). Having read the abridged version of Mercer's memoir whilst visiting Waterloo, I was keen to read the full story. In reviewing this a second time I may repeat myself a little. Please forgive/indulge me!

Starting in England, the narrative of his journey to Belgium is as exciting and interesting as the battle itself. The sea-crossing and subsequent travels through various Belgic billets are all fascinating, described with an eye for detail that's as artistic as it is military. Once the conflict gets underway, Mercer and his troop arrive on the scene at Quatre Bras just in time to perform a very exciting stint of rearguard duty, during which - as the elements do battle as ferociously as the human and equine actors (oh, and there's even an unfortunate pig!) - he catches a sublime glimpse of Napoleon himself, sitting his horse atop a hill bathed in sunshine, whist Mercer and his guns are in the deep shade of ink black storm clouds.

Throughout this story, but especially at Waterloo itself, Mercer comes across as very brave, if not perhaps as experienced as some of the other RHA Captains (he confesses to numerous mistakes he makes at various points, mostly logistical stuff, and not at Waterloo itself, fortunately), many of whom were Peninsular veterans. He incurs both the praise and censure of Wellington, a subject which he is clearly a trifle touchy about (this theme is enlarged upon in the extra biographical content). Is this one of the reasons he never published his memoirs, perhaps? They were eventually published by his son, with little or no editorial intervention. Andrew Uffindell is clearly proud, and rightly so, of his part in seeing this superb account finally getting the editorial and supporting scholarly research attention it so richly merits.

The complete painting of Wellington at Waterloo, by Hillingford, from which the fuller version of Mercer's journal gets its cover image. (source: wikimedia commons)

The part that deals with the battle of Waterloo itself is terrific: detailed, exciting, colourful, and humane. Mercer gets over the terrible carnage - G Troop certainly did their duty in ensuring that the French 'butchers bill' was awfully high - and confusion of battle, including feelings of guilt at his own losses, and instances of 'friendly fire', extremely vividly. The period after the battle, as Mercer and the Allied and Prussian armies make for Paris, is equally fascinating, revealling much of great interest regarding those 'behind the scenes' aspects of campaigning that most popular or scholarly accounts of campaigns such as this usually gloss over or ignore.

Towards the end of the narrative Mercer gets leave to go home. Visiting his wife, she begs to return with him, and (against his counsel) does so. Mercer ultimately sees out his involvement in the campaign in company, with his wife's needs adding to the complexities of his own logistical billeting difficulties. The intensity and detail of his account peters out a little towards the end, but overall this is a remarkably rich and involving account of one of the world's most written about campaigns and battles.

This edition benefits form copious quantities of maps and illustrations, alongside plenty of editorial interjections that further elucidate numerous pertinent points. The biographical detail on Mercer at the start of the book is great as well, and there's more additional matter at the end. The abridged version was somewhat spoiled by an abundance of egregious typos. Thankfully the editorial care taken here is of an altogether different and much higher order.

Essential reading this, for the Napoleonic history nut in general, and the Waterloo obsessive in particular. I'm glad I read both versions. The longer of the two would've perhaps been too much for our brief Waterloo 200 trip, but of the two it's by far the better.