Book Review: The Passing Of The Armies - Joshua Lawrence Chamberlain

NB: Currently I'm too busy with several strands of work to be modelling or painting figures, alas. In the meantime, posting some book reviews is one way I can maintain some sort of activity on ye olde blogge!

Stirring stuff from a University professor who, according to legend, proved that a 'textbook manoeuvre' can sometimes work in the field.

I bought and read this book (in the Eyewitness To The Civil War edition pictured above) shortly after watching the DVD set of Ken Burns' excellent historical PBS TV series, Civil War [1]. 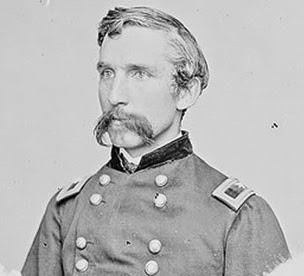 In that terrific series of documentary films (nearly 12 hours over nine episodes) stories about and quotes from Joshua Lawrence Chamberlain figure fairly prominently at several points. Some of the most memorable quotes come from this particular account, including a very poignant and moving passage about the surrender of the Confederate forces at Appomattox, during which Chamberlain had the honour of commanding the Union contingent.

The last four days of the ACW come to an end at Appomattox. This is where Chamberlain would have accepted the Confederate surrender. This map - which I don't think mentions Chamberlain specifically? - from the April 1965 issue of National Geographic magazine, haunted me for years! [2]

Chamberlain had been an academic prior to the outbreak of the Civil War, and his prose is somewhat grandiose at times, which dates the feel a little. But overall he's an excellent writer, coming across as intelligent and humane, with a very 19th Century sense of martial honour. Chamberlain can get quite poetic, such that his account is almost rhapsodic in places, his intelligence and even his dry sense of humour shining through in a highly engaging narrative. 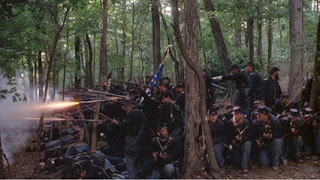 The 'hinge' of the 'gate' that Chamberlain swings shut, to great - perhaps even decisive? - effect, as depicted in the movie Gettysburg.

Subtitled An Account of the Final Campaign of the Army of the Potomac, Chamberlain relates the actions of White Oak Road and Five Forks, as Lee's shrinking army is brought to bay, before ending with a near Homeric rendition of the surrender at Appomattox. It's quite hard to convey to the modern reader the intoxicating romanticism of his writing, when, after two world wars and the knowledge of so much brutality and suffering we might find it hard to stomach such a 'heroic' tone. But Chamberlain wasn't sentimental, he saw and lamented the cost. 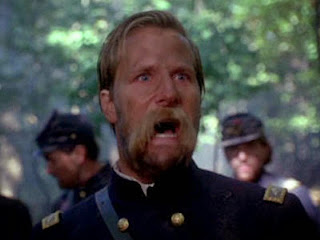 Jeff Daniels was perfectly cast as Chamberlain in the excellent movie Gettysburg, capturing the attractive qualities one also detects in Ken Burns documentary, many history books, and Chamberlain's own accounts, of a sensitive intelligent man, who managed also to be an inspiring and decisive military leader without sacrificing his humanity. I think I need to find a good biography of this intriguing man next. But I'd certainly recommend this fascinating and moving account very highly. 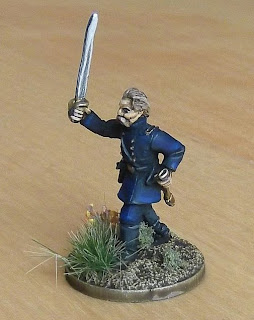 One of a number of wargaming figures of JLC that are out there. I forget who makes this one... hmm?

[2] I posted about this subject, which turned out to be (or should that be 'turned into'?) a quest for the ACW 'battle maps' of David Greenspan,  here.
Posted by Seb Palmer at 15:44

Email ThisBlogThis!Share to TwitterShare to FacebookShare to Pinterest
Labels: book review, Joshua Lawrence Chamberlain, The Passing Of The Armies