I was loaned this book by a friend - thanks Bernie - after confessing the 'shame' (only kidding) of my return to childhood pastimes. It turns out he collects Hornby and other HO/OO railway stuff. Obviously Bernie and I are the exact demographic to which this book's subtitle - Who Says You Ever Have To Grow Up? - is addressed!

After sitting on the book - not literally of course (don't worry Bernie!) - for rather too long, I thought I'd better actually read it, instead of just looking at the pictures every once in a while. It turned out a very quick and easy read, partly on account of the fact that there's so much visual content. If work hadn't intervened it'd certainly have been possible to read the whole thing in one day, if not perhaps one sitting (numb bum!). 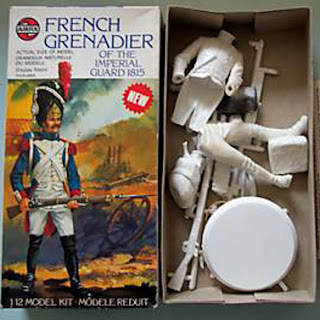 Above, two of the Airfix kits my dad made; a big influence on me as a kid!

Author Arthur Ward had already written a book on the history of Airfix (Airfix: Celebrating 50 Years of the Greatest Modelling Kits Ever Made), and is an obsessive collector and self-confessed Airfix nut. So, he's well qualified for the task he undertakes. The book itself is both a celebration of Aifix and its products, a history of the company, and a visual compendium of Airfix related material.

The founder of Airfix, Nicholas Kove, was something of a rum old cove. Known for his volatile temper, he had roved around Europe trying all sorts of ideas out, mostly to do with exploring lapsed patents, and increasingly focussed on the new technologies around plastics. Finally settling in Britain, he eventually settled on the name Airfix, initially producing all manner of products, amongst the most successful of which were such things as combs, items for the war effort, and sundry novelty/toy type items. 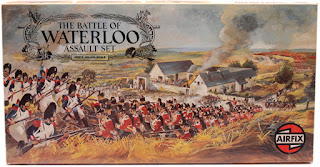 I believe I owned this set at one point. How I wish I still had it!


Not exactly a charming man, he was ultimately judged - by the bank - to be a liability to his own business. When he died, in 1958, the company was thriving, but he had relinquished control, and they were still in the early days of moving into the model kit territory with which the name Airfix subsequently became inseparable.

Walsh mentions that this - when a particular brand ends up loaning its name to a generic product (Hoover is the perfect example) - is, according to the standard 'wisdom' of current business thinking, not a good thing. Walsh suspects that Kove would've nevertheless liked the fact that Airfix would become a byword for 'plastic model kits'.

One of the older Airfix logo variants. Stylish!

There are seven chapters, plus appendices:

Assembling Airfix - Nicholas Kove and the founding of the company, and it's passage through WWII.
Boxing Clever - Airfix and their ranges grow; HO/OO is established (railways and historic figs).
Boom Times - the '60s certainly swung for Airfix, albeit not in the flower power way; Airfix Industries thrives.
Airfix Takes On The World - even better for business than the '60s: five new kits a week!
Trouble Looming - as Thatcher dismantles the UK's industry, Airfix is taken over by U.S. corporate giants.
A Brush With Humbrol - Humbrol and Airfix (so long teamed in the hobby anyway) become involved commercially.
Chocks Away - Hornby buys Airfix.
Appendices - these include a complete list of Airfix kits (from 1952 to 2009), and a few other it's and bobs.

For us hobbyists, the earlier and middle chapters are, perhaps (and certainly for me), the more interesting ones. I must admit that all the stuff about changing ownership and boardroom battles was, frankly, not only not very interesting, but actually rather depressing. But then I'm not much of a capitalist.

One of Roy Cross' beautiful box a/w paintings (not being much of an aviation buff I don't know what 'bird' this is!?).

Like Walsh, I love the classic box art of certain periods. The earliest kits came in what Alan Bennett has described - in referring to something else - as 'plain utility packets', after which came some rather simple and stylised graphics (nicely designed with a certain period charm) that adorned the 'plastic bag' phase, before such artists as Roy Cross and Brian Knight started to adorn the classic boxes with their terrific artworks.

As much as I enjoyed some of this book - the pictures perhaps most of all - this is, for me, a strangely mixed bag: sure I love the pics, and even some of the history of the company, especially in the early and middle period, is quite interesting (especially where there's an element of personal passion between those involved in the products origination and their subjects, i.e. the kits or figures). The latter part of the book, where it becomes more about corporate buy-outs and business speak, loses my interest.

Another of these nostalgia boom titles.

This does make scoring the book tricky: certainly it's well done - thorough and comprehensive, etc. - and the pictorial elements in particular score highly for me. But despite my own near overpowering nostalgia, which includes a soft spot for Airfix, the issues of the singular focus on Airfix, and the corporate history, detract somewhat from my overall enjoyment.

I found Harry Pearson's more wide-ranging book, Achtung Schweinehund, a much more satisfying and enjoyable read, and had hoped this book would somehow be more along those lines. But it's a different kind of beast. So, worth reading, but I'm glad I only borrowed a copy. And I'm less sure now whether or not I'll buy that book about ESCI that I was considering buying!