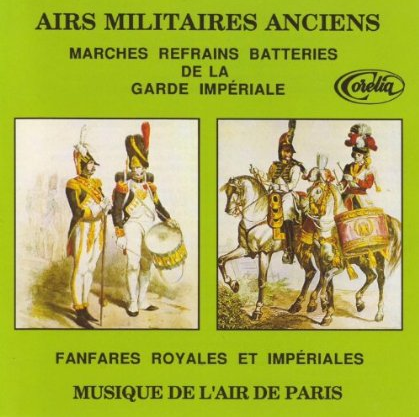 Airs Militaires Ancien, by Musique De L'Air: I bought this album as a digital download via Amazon UK.

At one of the wargaming shows we occasionally attend, my wife Teresa suggested that one thing the beautiful display games lacked was music or sound effects to set the scene, and she also suggested that I ought to try and get this sort of thing, as part of my own endeavours. A great idea... thanks love!

The album pictured above was something I found after a bit of searching on the web. There are other albums, and I'll investigate further on this theme some time soon, I hope (time allowing). For the time being tho', a few brief word on this album. I can find very little info at all about the ensemble itself. There's a brief biog in English on the Naxos classical website (here), and some French sites with a little more info (such as this IMMS [international military music society] one, in French). 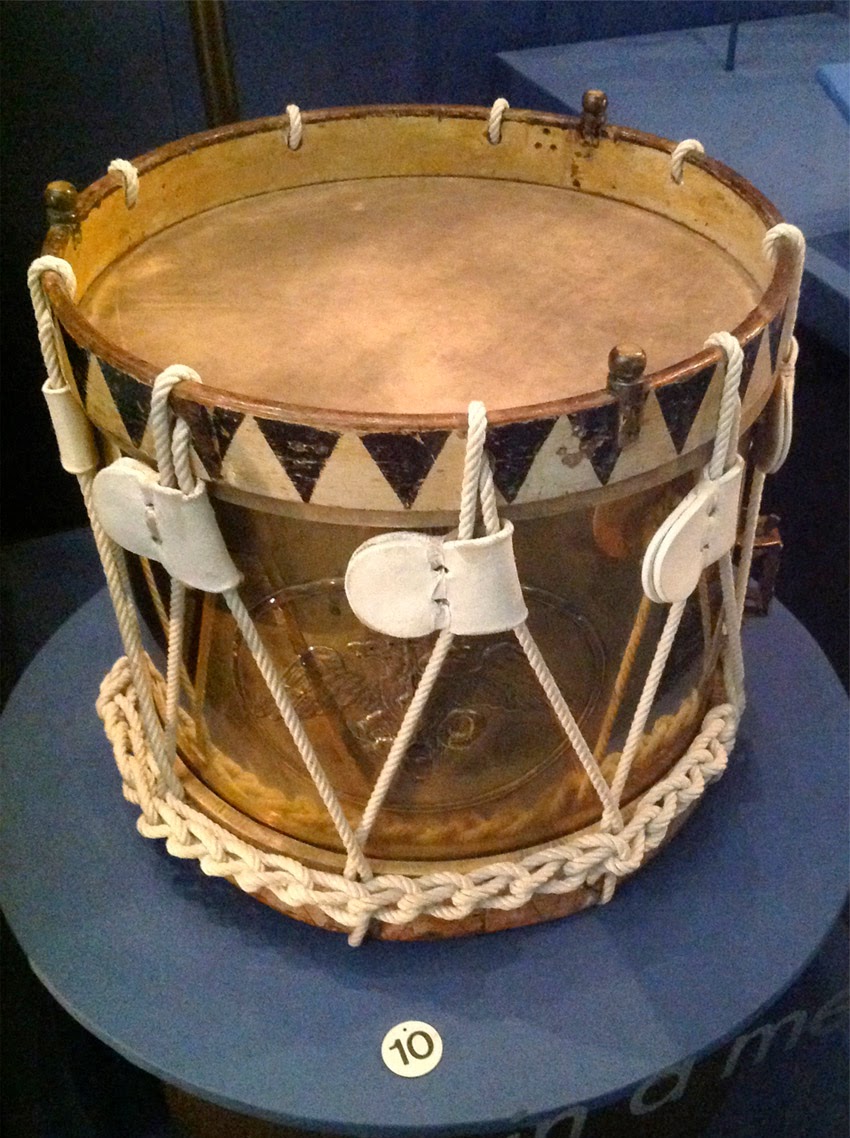 As a drummer myself, I'm rather fond of vintage military drums: I took this pic at NAM (the NAtional Army Museum, Chelsea), in Dec., 2013. I believe this may be French Napoleonic drum, although I'm not certain.

According to deezr.com the album I'm writing about, Airs Militaires Ancien, was released on the Corelia label in 1975. There are 30 tracks, which split roughly into two halves. The first half of which have a lot of drumming, and a fair bit of brass-heavy orchestration. The latter half is even more brass-heavy, and mostly rather fanfare like. Being a drummer myself, I like some of the drummier stuff. And it has to be said some of the brassier stuff features a few duff high notes. But in a way this latter makes for a more 'authentic' vibe. You can't expect 100% perfect execution on the bloody 'field of glory'!

If anyone knows of any other suitable recordings, please let me know. And I'd be particularly interested in hearing about any sound-effect/sound-library type recordings with suitable sounds: cannon fire, thundering cavalry charges, the sound of horse and musket era mêlée-ing, etc.

Keeping with the musical theme, but returning to my own endeavours: I bought some Heroics & Ros Imperial Guard bandsmen at Salute '14, and back in April I painted them. The following pics are from a stage or two before they were finished (and they're still not based!). 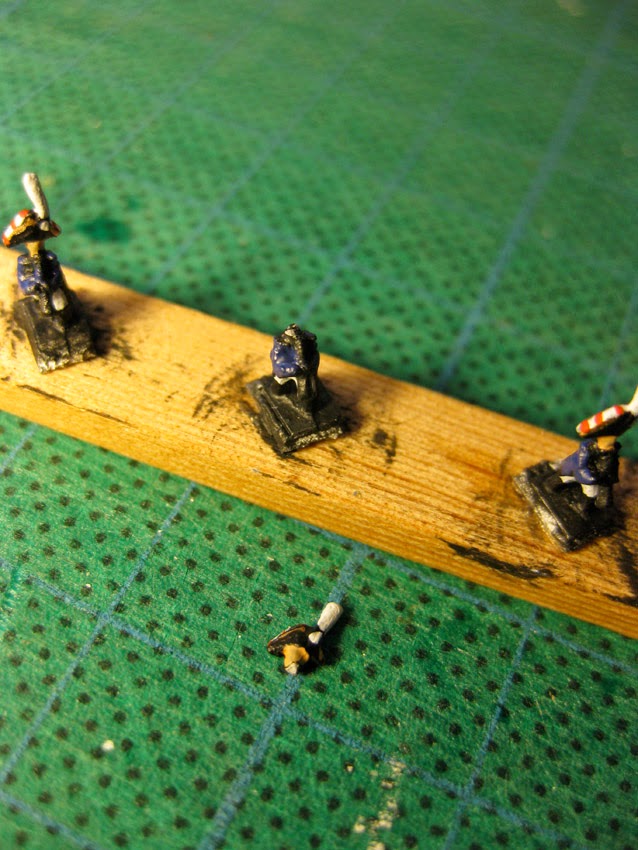 Aargh... a battlefield decapitation! I re-attached his head: he's on the left of the pic below, post superglue-surgery. 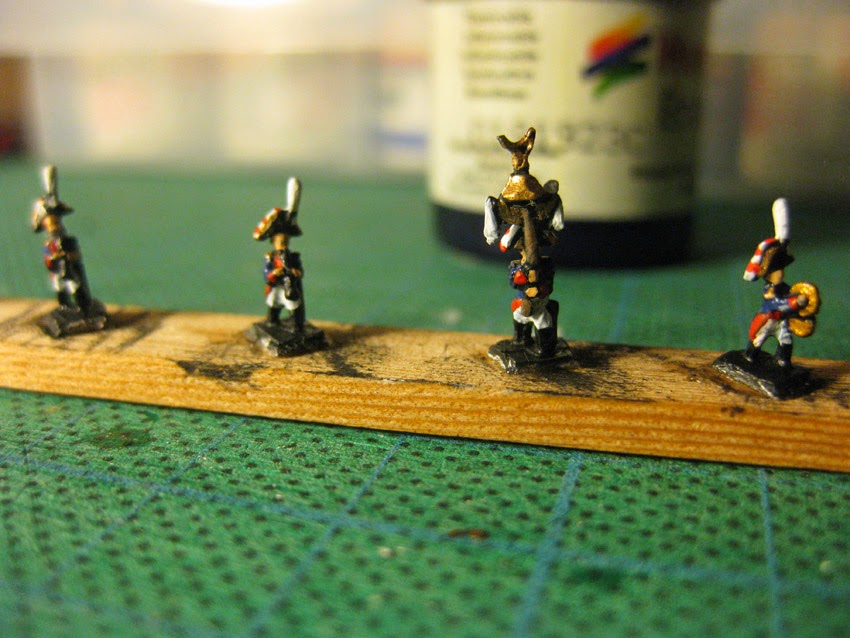 Two pipers (one wounded - see above!), the 'jingling-johnny' guy, and a cymbalist. 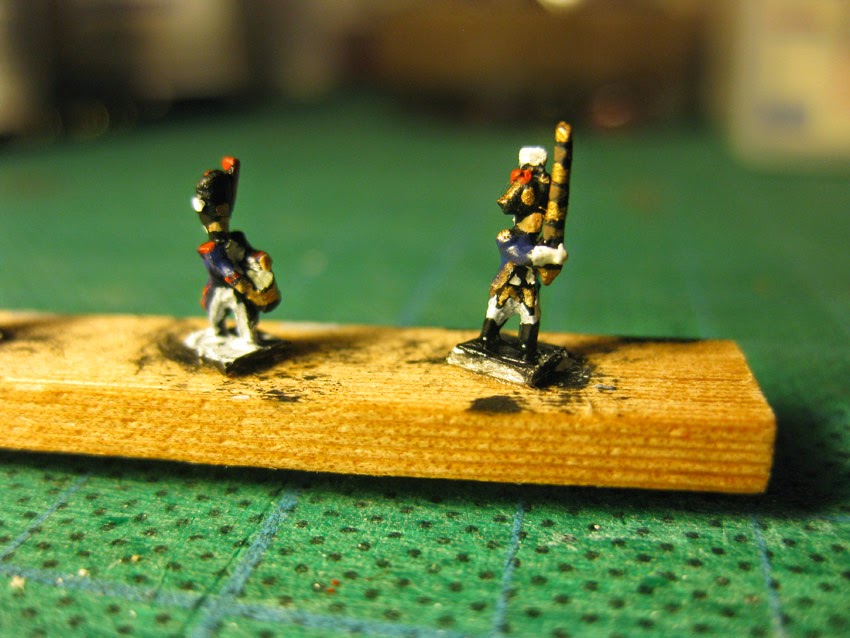 The band-leader, with his fancy lace pantaloons and his mace (more like a Scots caber at this tiny scale!), and a grenadier drummer in his bearskin. 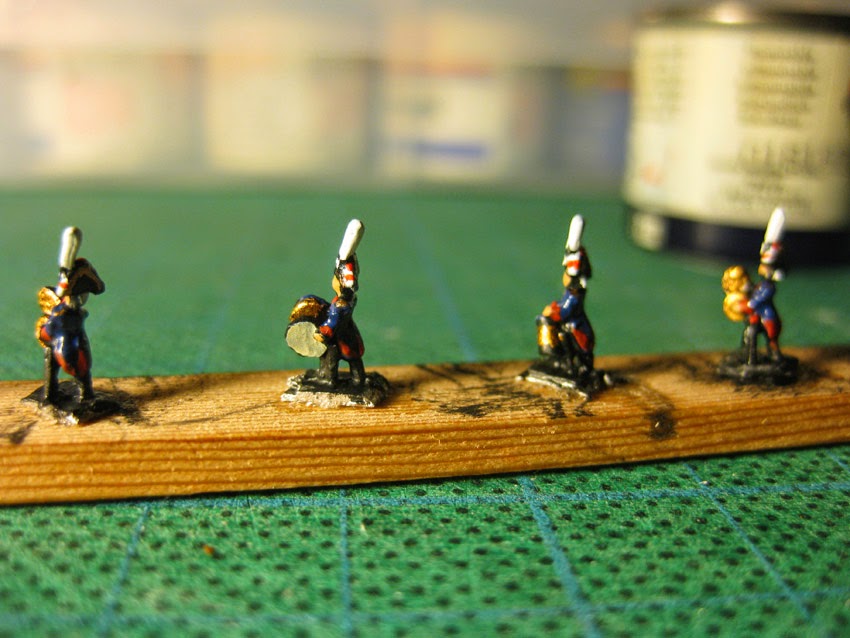 Close to my heart: the rhythm section. 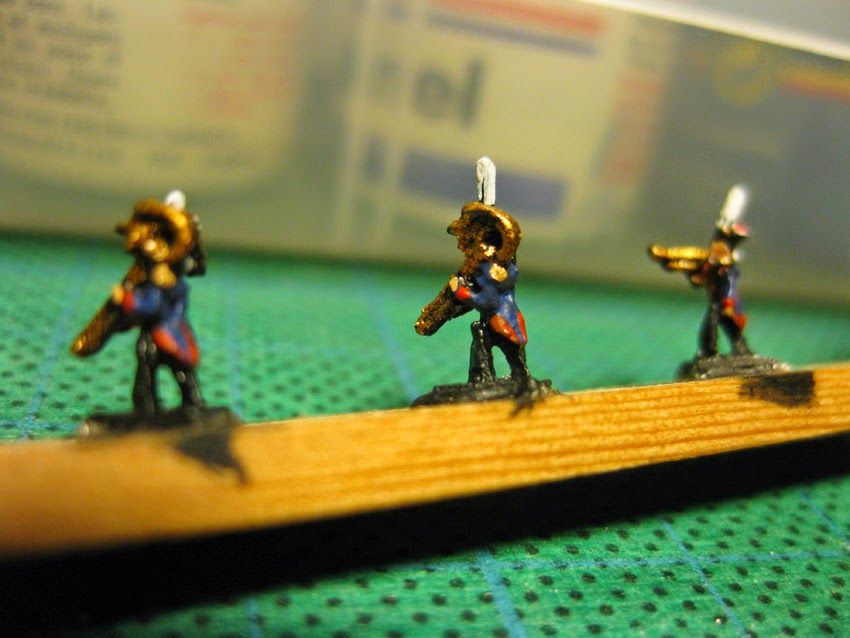 The two guys at centre and left are playing the buccin (read all about it here), a serpent-headed trombone type instrument. I love that H&R went to the trouble of making the serpent-heads very clear... nice! 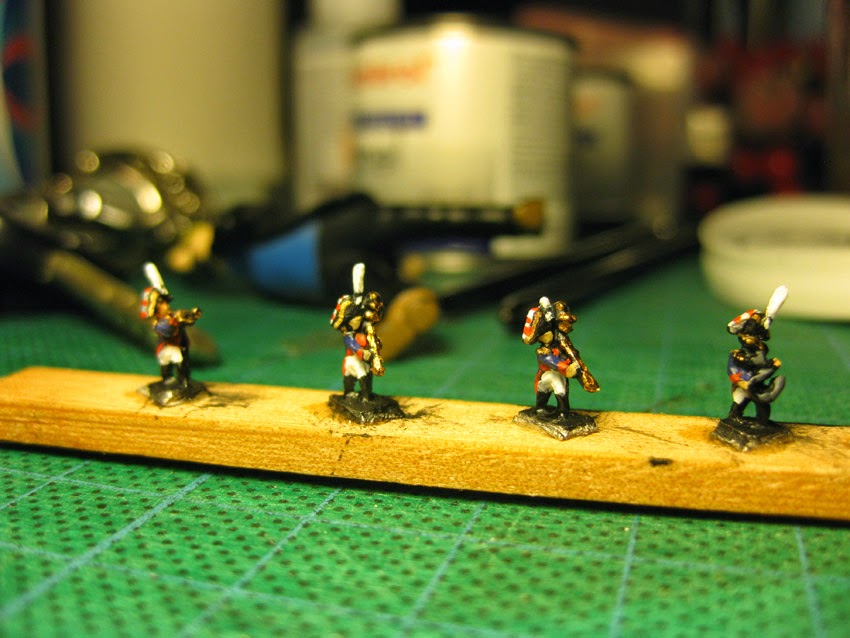 I like these guys so much, I wanted another angle on them: this is them from in front. Also visible here, on the right, is the 'serpent'!

As well as referring to my L & F Funcken volumes, and Rousselet, etc., I also scoured the web for info on painting and basing them, and found a fair bit. One of the most helpful pages can be linked to here. Still not decided quite how to base them tho'.