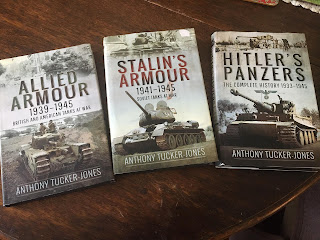 Today’s post is another of my occasional ‘trinity’ or trilogy reviews. On this occasion under review we have three titles, all on WWII armour, by author Anthony Tucker-Jones: Allied Armour, Stalin’s Armour and Hitler’s Armour. 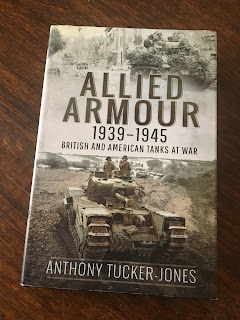 Whilst well enough written, Allied Armour - and by Allied what’s really meant is British and American - is, to a very great extent, rather cloyingly data-rich and dry, mostly comprising recitations of the many campaigns in which its subject was involved, with a lot of commander’s names, unit numbers and place names, but - unusually and, it must be said, unhelpfully - no maps.

I can see why some might be critical of such books, as they are neither deep dives into the tanks themselves, nor any of the particular campaigns. Rather what we have is a series of succinct synopses of the various campaigns as a whole, with a focus on the armoured warfare aspects. Still, I think having works of this type provides a kind of mid-level matrix, knowledge of which is very useful. This can then be deepened by works of more detail on specific armour or actions.

From Matildas at Arras, via Faliase to the Rhine, 16 chapters cover not only the entire war in the west - including the North African and Mediterranean campaigns - but also the Australasian and Pacific theatres. And in the final 17th chapter, Industrial Muscle, we learn the true scale of armour production for each of the various combatant powers. For example, British and German tank production was roughly equal in quantity, if not quality. But against the combined industrial output of Uncles Sam and Joe, the Axis were doomed. Sherman tank production alone being more or less equal to all British and German tank manufacture combined!

Two appendices list all the Allied armoured divisions and, crucially, there's an alphabetical list of tank types. This last section is as important to the book as the foregoing chapters, as it's where a lot of the more specific vehicle related info' is. Despite the text veering, in places, perilously close to being rather dry and info-heavy, and in danger of falling between the stools of detail and generality, I thoroughly enjoyed this book. Enough to read it all the way through, with enthusiasm, and still look forward to following it up with the Russian companion. 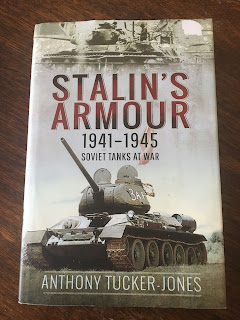 Having just read the Allied Armour volume of what one might regard as a ‘tank trilogy’, and thoroughly enjoyed it, I’ve dived straight into Stalin’s Armour, 1941-1945. Thank goodness Anthony Tucker-Jones is a good writer! In less capable hands the data-rich material could induce a coma.

Fortunately the maelstrom of commander’s names, unit titles, and place names is leavened somewhat by, on the one hand, more general descriptive history, such as on the development of Soviet armour - Kotin’s KVs or Koshkin’s T-34? - and on the other, more specific anecdotal reminiscences.

The total absence of maps is an issue with all the volumes in this tank series, leading me to dock a star/kreuz. And it is, for me, even more of an issue in this particular volume, given the scale of operations on the Ostfront.

Anyone familiar with Hitler’s costly misadventures on the Eastern Front will almost certainly already know that, as a German talking head (ex-soldier) says in, the superb ITV series, The World At War... eventually millions of ant will overcomne even the elepohant (or words to that effect!*). Echoing this, Tucker-Jones concludes ‘Faced by this crude arithmetic the T-34 carried all before it.’

* I've been unable to locate the exact quote!

As with the other companion volumes, there’s a section of black and white photos. Rather oddly most the images in this volume are of damaged, destroyed or captured Soviet materiel, often being inspected by German troops. There are also two appendices, the first listing the many ‘Red Army Tank Units 1941-45’, the second comprising brief descriptions of ‘Soviet Tanks and Tracked AFVs 1941-45’.

For me, with each volume I read, it seems the three titles in this little trilogy are forming a useful ‘matrix’; the more one reads on these subject and campaigns the better and more detailed a picture one develops. The material here does occasionally veer towards the info-heavy side. But all told this a compelling enough read for me to happily and heartily recommend it. 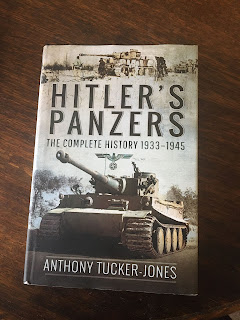 And so I come last to the one of these three books that most excites my interest, Hitler’s Panzers, The Complete History, 1933-45. This third title in the AFV trilogy by AT-J is organised somewhat differently from the others. Split into four sections, and with larger appendices, 18 chapters tell the fascinating story of Germany’s legendary WWII Panzerwaffe.

Part I, ‘Designing Tractors’ looks at the development of the various main tank types, from the Versailles-busting but otherwise fairly innocuous Pz I through to the awesome but over-engineered and under-produced Tiger II. This is one of the best and most interesting parts of the trilogy, for my money.

Parts II, III and IV - Off To War, Sturmgeschütz Not Panzers and Wasted Opportunities - cover the war itself. The balance of bigger picture, and close-up detail, is better here, for my money, than in the Allied or Russian titles, in both of which the maelstrom of campaign info’ can be overwhelming (and without maps hard to make sense of).

Guderian is referred to more than any other Panzer enthusiast, the theme of his tug of war with Hitler - the latter obsessed with both his idea of the ‘triumph of the will’ and size (big guns, big tanks!) - being something of a theme throughout the book. There are those who feel Guderian overstates his own role and importance in all of this. ATJ doesn't raise this issue.

Whereas the Allied volume ranges across Europe, bridging to North Africa via the Med’, and even the conflict with Japan in the further flung Pacific theatre, and the Russian volume has an early Eastern episode in the Russo-Japanese conflict on the edges of Northern China, this German themed volume kind of ties them all together, via the two Eastern and Western Fronts on which all three of these combatant powers fought.

To those familiar with WWII, Germany’s issues of over-engineering, too much diversity, and insufficient levels of production will all be familiar themes. And, as in other areas, these issues bedevilled tank and AFV development and deployment. But these are also amongst the things that make WWII German tanks the most fascinating. And it doesn’t hurt that they also looked so damn cool!

Anthony Tucker-Jones ultimately concludes that of all the Panzers Germany produced and fielded during WWII, the best, in terms of efficacy, reliability and sheer weight of numbers, was the Pz IV. Germany built approx’ 8,500 Pz IV, according to T-J, whilst Russia’s factories churned out 55,000 T-34s. And Sherman output totalled about 50,000, all told. The more celebrated Panthers and Tigers are critiqued for being rushed into service (and therefore plagues with technical issues), and their impact dissipated, never being built or deployed in large enough numbers to have a decisive impact.

Hitler’s Panzers also benefits from more picture sections, and more extensive appendices. The latter include production figures, Panzer and Panzergrenadier Division lists, and individual appendices for each of the Pz I-VI, listing and describing variants. Rather oddly these go I, II III IV, and then VI (Tigers) precedes V (Panthers). A bit odd!? There are, regrettably, no maps or glossary.

I’d say that, together or separately, these books are a worthwhile additions to the library of any self-respecting WWII history enthusiast. I read them all, one after another, without losing enthusiasm. In fact the interest and excitement mounted with each new volume. I also think they get better progressively (I don’t know what order the author wrote them in?), the Allied book being pretty good, the Russian one a little better, and the German one the best of the three.

Their best points are that they cover all the major theatres of war, and do so in a readable manner, albeit occasionally being somewhat dizzyingly data-rich. There are one of two things that might be improved on future editions, such as remedying the complete absence of maps. The picture selections could also be better and more diverse. Maps would help the reader follow the actions described, and the picture segments could do a better job of covering the many AFVs mentioned in the text.

I can see why for some, these might in places fall between the stools of generality and detail. Taken as a whole, however, I think they form an excellent core of information on the development and combat histories of these mighty brutal metal beasts of war. All told, I really enjoyed reading them, and would definitely recommend them.