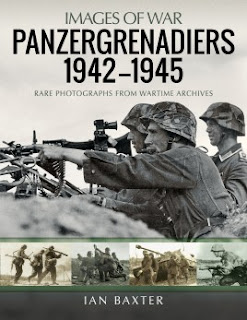 Another entry in the Images of War series covering WWII German forces from Ian Baxter. This one dealing with the Panzer-Grenadier Divisions. I’d give the pictorial content four kreuz, or stars, the text three, so three and a half over all.

As with pretty much all the Baxter titles that I've encountered the text is a bit sloppy and repetitive (partic' so in the latter respect via the captions, which frequently repeat stuff from the body text). And sometimes things that are not visible in the image - that are too small, cropped, or just indistinct - are remarked upon, or there’s even an outright mistake as to content, such as when a Stug is misidentified as a train!

Nevertheless, there’s a good deal of useful info on the history of these units: how they came into being, where they fought, what became of them, etc. Appendices at the rear of the book also list all the units referred to in the text, giving more of this same basic info again.

But it’s the pictures that are the main attraction, naturally. All black and white; some I’ve seen before, but many, indeed most, are new to me, which is always nice and refreshing. Most of the images are of a decent quality. All told, another useful reference work for the WWII military history buff.