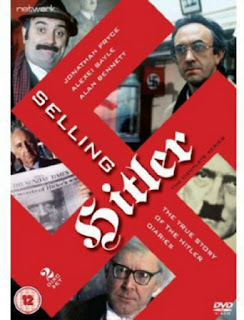 NB: This is another of my occasional archival posts, originally written ages ago and posted elsewhere. But it came to mind as I was reading and reviewing Tim Heath's recently published, Hitler's Housewives, as I wondered (or rather worried) about the author's unverifiable sources.

This short 5 episode series tells of the highly intriguing affair of 'the Hitler diaries'. Bought by a credulous and over zealous German reporter with a Nazi fixation, and sold to Stern magazine (and beyond), they were endorsed by handwriting analysts and even some historians, but forensics eventually proved them to be fakes.

It's a strange thing, in a way, knowing the outcome before you see the story unfold. But the drama is in the desire to believe, which grows exponentially the more money and faith is invested. The acting is good, with a strong cast filled with both the well and the lesser known of British acting at the time, headed up by Jonathan Pryce, who's excellent as Gerd Heidemann, the Stern reporter nicknamed 'the bloodhound', whose nose for a good story, whilst not quite failing him altogether, certainly leads him astray.

Some pretty big guns, like Tom Baker & Richard Wilson are great as other journalists, some supportive some sceptical. Alan Bennett is very enjoyable as historian Hugh Trevor-Roper, and Roger Lloyd-Pack makes a credible David Irving, whilst Alison Doody is suitably siren-like and enchanting as the rather air-headed air-stewardess wife of Heidemann. Barry 'Dame Edna' Humphries is convincing as hard nosed mogul Rupert Murdoch, and we even get to see a very young Peter Capaldi.

Alexei Sayle plays Konrad 'Connie' Kujau, a former petty criminal turned dealer in Nazi-memorabilia. Discovering he could turn his artistic skills into large sums of cash by forging pretty much anything his shifty but eager clients wanted, this ultimately leads him to fake a growing collection of 'Hitler diaries', which he feeds to Heidemann. Sayle is an aptly ironic and intriguing choice for this role, which he plays pretty close to the knuckle in terms of comedy (almost lapsing into farce), given the combo of his personal left-radical leanings and Jewish ancestry.

Selling Hitler aired in '91, but looks and feels very '80s (exhibit A: Peter Capaldi's hair!). On the whole this is fine, and quite interesting in itself. But there's one moment where the full horror of the worst of the '80s asserts itself, when Heidemann and his wife go on a shopping spree with his ill-gotten gains; thus brief episode is set to an appallingly awful slice of electro-pop. It was very difficult to watch that mercifully brief scene! Fortunately it was a one-off.

Much of the filming appears to have been done on location in Germany, which helps make it look authentic, and there are mocked up bits of newsreel footage (spliced with genuine stuff) that relate to the backstory of the plot. There are also some bizarre pseudo-Wagnerian moments, complete with near surreal '80s style 'video montage' effects. The titles also betray a slightly comic edge.

All in all, this is an odd package. Mostly played quite straight, it nonetheless has occasional undertones of comedy. This, and the surreal Wagnerian stuff, conspires to make it feel somewhat uneven. But it tells a very interesting story, and even has a strange period charm. Definitely well worth watching.
Posted by Seb Palmer at 16:08