Book Review: The Americans, from the Ardennes to VE Day, Brooke S. Blades 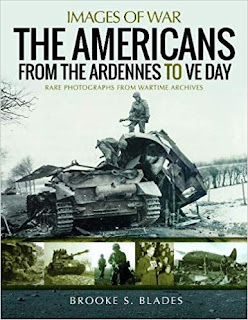 This is the third and final instalment of what is now a trilogy, by American author Brook Blades, covering the Americans in NW Europe during WWII (I've posted a review of the first part here). The best thing about this book, as befits an Images of War title, is the rich and varied selection of photographs. 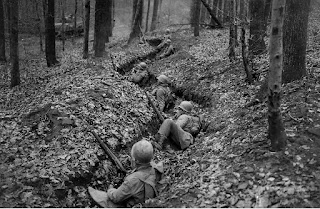 The text is perfectably serviceable. But, as with many titles in the Images of War series, it's a data-heavy compression of large amounts of info, making for rather dry and not easily memorable reading. Chapters titles convey what is covered: The Winter Offensive (i.e. the Battle of the Bulge, part one); The Ardennes Winter (or Bulge, part two); Advance to the Rhine; Varsity (the Allied crossings of the Rhine); The Allies in Germany; Aftermath. 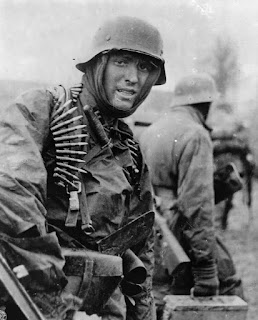 One of the more familiar images in the book.

There are also a few maps covering key events. But it's the photographs - and more than usual notice is given to the photographers who took these amazing shots - that are the stars in this book. Although I did recognise a good many images here that I've seen before elsewhere, given how much I've read and viewed on this theatre, the amount of new and unfamiliar photographic documentation presented here is, to me, very exciting and impressive.

As a putative wargamer I particularly love the occasional aerial photos, of which there are a decent number. These really help convey something of the mix of strategic and tactical reality, as 'played' out in the real world. As well as many portrait like shots, and behind the lines stuff, there are a good deal of images captured on ornear the sharp end. And - one of my favourite types of scenario - there are a good deal of images of the logistical chain, from ammo and fuel-dumps to troops en-route, and equipment (particularly impressive are the rows of planes and gliders preparing for Varsity) being prepared for combat. 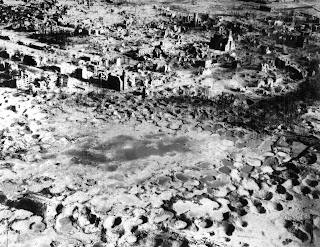 One of a number of interesting aerial photographs.

The main focus, as signalled by the title, is on Americans and their stuff. Next in order of coverage come their adversaries, the Germans. British and Canadian allies also appear, but less so, and chiefly in areas - such as after the messy aerial drops of Varsity - where they worked together, whether by chance or design.

The several photos of the paratroop deployments of Varsity, with their many planes and the almost ack-ack looking smatterings of parachutes, very densely concentrated, are amazing. This is one of the best in this excellent if occasionally rather variable, quality wise, series - by which I'm referring to IoW, as opposed to Blades' trilogy. Whilst I know I've got and have reviewed part one of this trilogy, this third and final volume is so good I feel I must ensure I also have volume two! 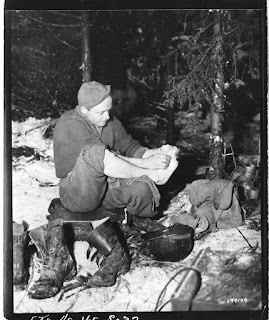 So, all in all, a fascinating and compelling resource, whose text covers the period as concisely and as thoroughly as could be wished for in a book mostly devoted to imagery. And in terms of the pictures, another exemplary addition to the Images of War series. Highly recommended. here
Posted by Seb Palmer at 09:30