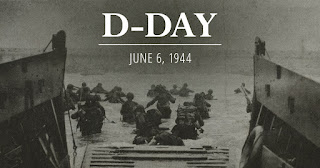 75 years ago, today, the world's greatest military armada landed Allied troops and materiel on the shores of Normandy. I thought I'd remember and celebrate this with a post on the subject.

The first thing I'd like to note is how, growing up in the village of Comberton, five miles west of Cambridge, my family would frequently pass the American Cemetery (read more on the latter here), at Madingley. My dad would never fail to mention it, as we passed, on our way in to or out of town. But even in the ensuing years in which I grew to be fascinated by military history, models and wargaming, etc, I never took a real interest in the place.

The American Cemetery at Madingley, Cambridgeshire.


Indeed, it wasn't until my return to both my old 'neck of the woods', having moved back to Cambridgeshire after about a decade in London, and my eventual return to the hobbies and interests of my youth, which came later, that I finally started to visit the Cemetery, and comprehend its significance. I've been there three or four times now. It's well worth a visit. I was surprised they aren't holding a D-Day memorial service today. But I found out they did so earlier this year. In fact I only just missed it; May 27th.

Rather than me going into it, and why there's an American Cemetery here in the first place, interested parties should read the previously mentioned link, or this post, the latter of which has plenty of interesting info' from a local perspective. 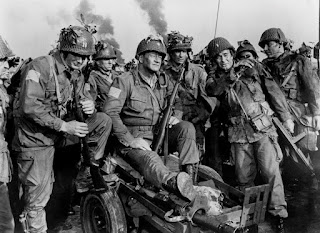 I'll be watching this later. with a drop of vin rouge, to celebrate.

I had hoped that perhaps my Canadian grandfather, Bert Palmer, had taken part in the D-Day landings, or the Normandy Campaign. And he might have, even if only indirectly. Based on some sketchy information from my father I believe he remained in the U.K, due to a traffic accident/injury (sustained under wartime blackout conditions), working as a mechanic and chauffeur.

I reckon I'll take the afternoon off, and watch The Longest Day. But numerous chores need to be attended to first. Speaking of The Longest Day, a phrase I believe Cornelius Ryan got from (or at least attributes to) Rommel - and The Desert Fox was on TV yesterday! - I'm currently reading an excellent book entitled The Germans In Normandy, by Richard Hargreaves. This superb book does for Normandy what Andrew Field's Waterloo, The French Perspective, did for that momentous clash, giving views from 'the other side of the hill'. 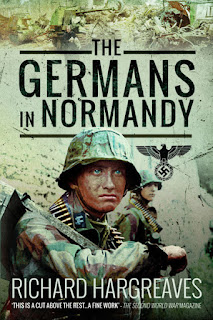 I tried to buy a bottle of red wine from Normandy, but couldn't find any in my local Sainsbury. I know the region is more famed for cider and Calvados. But I fancied a decent French red. It wasn't until the day after (i.e. now, on the 7th, when I'm typing this!) that I 'googled' the subject. And as the map below shows, nowadays Normandy isn't really considered a wine region. 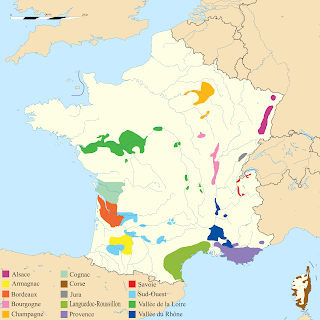 Nevertheless, I did find this producer. No English options on their website, alas. And I haven't tried to see if they sell any wines here in Blighty. Anyway, the wine I bought yesterday - and I departed from my usual tightwad budget of £5-8, and sploshed out (Flyodian pun) on a £12 bottle - whose name/region escapes me now, was terrifically good; soft and smooth as a velvet slipper! Teresa, who won't usually imbibe during the week, took a slug or two when I told her the occasion.

Ok, I'll admit I haven't said a huge amount here about either D-Day itself, or the Normandy campaign, or the contemporary events held on June 6th, 2019. But that's not really the point of this post. This is simply a moment of celebration and remembrance of those seismic events of 75 years ago. So, here's to all those who stopped Hitler's rot. Bottoms up!


And, to conclude, shown above is a very interesting video I found on YouTube, which is a film of D-Day to D+3 footage, as shown to the Allied leaders - Churchill, Eisenhower, etc. - very shortly after the events.