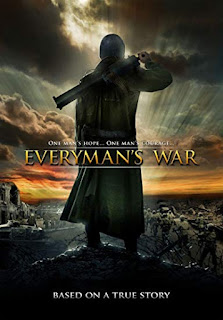 I bought this on DVD and watched it today. I could pretty much tell, just from looking at the cover, that this belongs to the ever-growing Indie-WWII movie scene. The cover of my DVD isn't the same as the image above, which is both a better cover and has a better strap-line - 'one man's hope, one man's courage... everyman's war'.

Sadly some marketing schmucks, as so often happens with war-themed films, especially when being marketed in places other than their country of origin, have gotten hold of the design process, and designed a more generic montage, pictured below. And, rather bizarrely, they've substituted Churchill's 'never have so many...' Battle of Britain quote for the original tagline. Why does this sort of thing happen so often!? 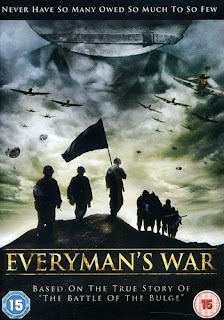 After watching the film, I thought I'd check the Amazon UK reviews for it. One of the many very critical reviews there compared it unfavourably with Band of Brothers. But that's pretty dumb, in my opinion, seeing as Band of Brothers cost $125 million, whereas Everyman's War cost about $500,000 [1]. Or in other words less than half of one per cent the budget of the star-studded Spielberg/Hanks HBO blockbuster.

Everyman's War tells the story of a group of young men from various places and backgrounds in the U.S, who wind up in the same unit, eventually fighting in The Battle of The Bulge. Mostly we follow Don Smith, who's falling in love with a girl called Dorrine, just as he gets called up. An unfinished letter to her becomes his talisman of hope, keeping him going as the war gets ever grimmer.

None of the actors are famous faces (none even have wiki entries), and the whole thing does have the feel of a movie made on a tight budget. The pacing of the narrative wouldn't pass muster on a Hollywood blockbuster. But it's actually done remarkably well, using appropriate locations, with the Germans speaking German, etc. And, quite frankly, I get sick of the formulaic way blockbusters are done. This sort of thing can't compete with the big bucks boys on stars, explosions and effects. But it can with a bit of refreshingly humble humanity. Something often notably lacking in star-driven movies.

The stories are all based on real people and real events, and the film had an unusual genesis: 'It started out as a short film and a labor of love, for my father's 85th birthday (he's 94 now) and quickly became a feature that I shot over a year.' [2] It's a movie about ordinary men in war. And a heartfelt one at that. I found it engaging and moving. And whilst it's not as 'epic', production wise, as for example the old 1960s Battle Of The Bulge film, in many ways it's a lot more realistic. [3]

Not an out and out classic, perhaps. But certainly worth watching. 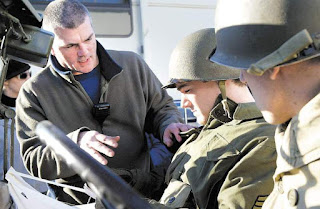 [1] I got in touch with director Thad Smith and asked what the budget was.

[2] Quoting from Thad Smith's email reply to my inquiry about the budget.

[2] At one point there's a very interesting scene with a prisoner being rescued from abuse by Don Smith. I won't say more here, as I don't want to spoil it for those who haven't seen it. However, it is worth noting that the German's who fought the 94th Infantry, Smith's unit, nicknamed them 'Roosevelt's Butchers'.