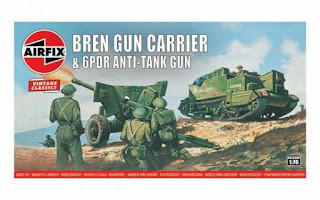 Crikey, it's been aeons since I've managed to do any model making at all. A shameful state of affairs!

Anyway, on a recent trip into Ely my wife wanted to pop into the haberdashers, which is tucked away in the back of the Ely City Cycle Centre. This fab shop, a proper old-fashioned department store, also has a large model and railway section, up on the top floor. So I snuck in there and quickly and quietly bought me a few models! 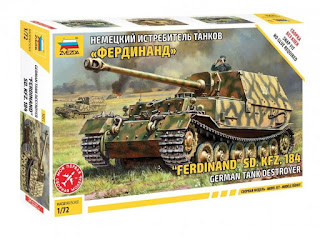 Damn, such a cool looking beast! 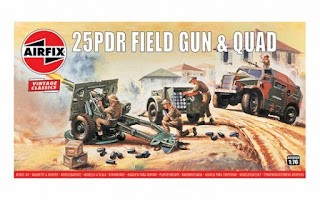 I got the Zvezda snap-fit Sd. Kfz. 184, or Ferdinand/Elefant. One of my favourite German armoured vehicles of WWII. I have versions by Fujimi (built, 1/76), Trumpeter (1/72, unbuilt), and now this'un (ditto). And then I spotted that they had a stack or two of the Airfix 1/76 'Vintage Classics' range of re-releases. I posted about these a while back, and mentioned that I might make some British stuff.

So I've made good on this promise to myself, and bought the 25pdr Field Gun & Quad, and the Bren Gun Carrier & 6pdr. Both kits have the added bonus of being two-fers, in that you get both a gun (& crew), and a vehicle. Today I started building the Bren Gun Carrier. In a fit of madness I decided to follow ye olde instructions to the extent of washing the sprues, and even painting the parts whilst still attached to the aforesaid. 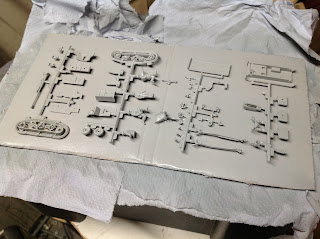 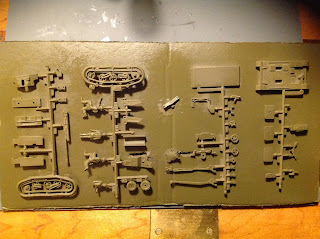 After giving the sprues a wash and scrub in warm soapy water, and letting them dry, I undercoated and base-coated them all, first in grey, then olive drab. Khaki clothing, black boots and tires followed. It was then, alas, time for bed. So even now that I've clawed back a moments modelmaking, 'twas ever such a brief one! 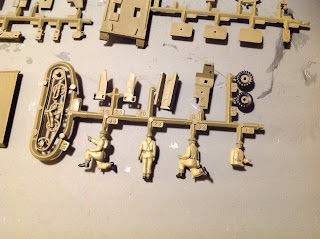 Painting bits whilst still on the sprues, as per instructions! 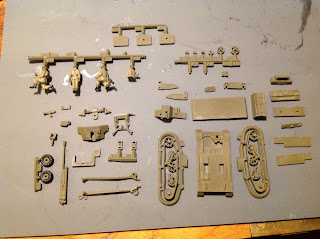 Overcome with the urge to cut stuff of the sprues.

Amidst all the recent redecorating and DIY I reconfigured my mini-military workspace. It's not yet optimal, particularly in terms of lighting. I found painting this lot, even just blocking in basic colours, very difficult and draining, even with one of those magnifying headband doodads on... Well, until tomorrow... I must be patient!
---------- 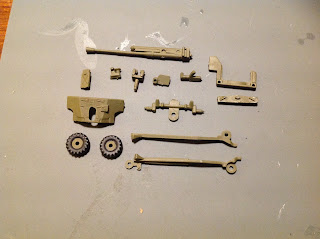 Well, back to the modelling workbench; I built the 6pdr gun. A fiddly little thing. I've also got a bit further with the Universal Carrier. The idea of painting the parts on the sprue? Which I've never done before...

Obviously when you remove parts from the sprue you wind up with an unpainted bit, where it was formerly connected. Then there's the way lots of the paint rubs off, as you handle the parts. And finally, any tight or ill fitting parts will fit even less well, or simply not fit at all, with the paint bulking things up. So, not a good idea, and I shan't be doing it again. Still, worth a try! 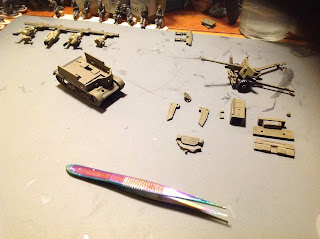