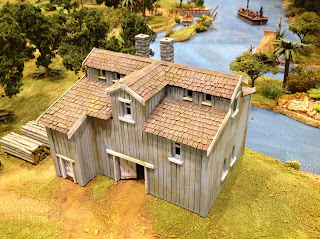 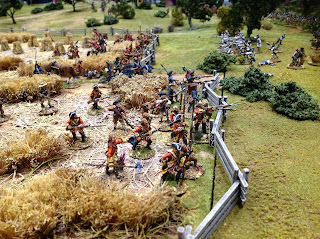 Sheesh kebop! It's taken me ages to get around to posting this. Just been way too preoccupied with General life/home and garden stuff.

The first thing I want to say is that I'm in two minds about Salute now. I think it's possibly grown too big for me to really enjoy. I went with a model-making buddy this year, who's not a wargamer. He said he enjoyed it, but then it was his first time. And he only bought some mags, no models/figures or ancillary stuff.

One of the traders I chatted to opened our conversation by saying 'I hate this show!' I was surprised and saddened by this unprompted and very negative ejaculation, which seemed to bubble up and out of the guy from sheer exasperation, I think due to the intensity of the scale of the event. We got there for doors open, and the first few hours are very intense, due to the volume of humanity. 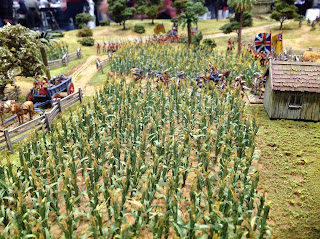 Wow! I love this cornfield. 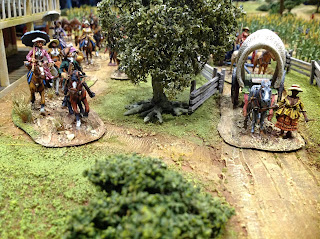 I've always been a fan of incidental detail, and love these civilians/camp followers.

I'm not a crowds person, so I tinfoil (eh? predictive goes mad... again; should've said 'find'!) it hard going. Plus I'm not that fit: I'm overweight (tho' not obese, I hasten to add!), and have medical conditions which, along with the drugs they require me to take, mean I'm pretty much tired all the time. Wearing out shoe leather traipsing round the cavernous (and soulless/ill-lit) Excel halls really wore me down. And there's simply not enough seating, meaning I had to continually perch beside trade stands or games I wasn't necessarily interested in.

Anyway, as usual, my main interest was in the book stalls. I managed exemplary restraint for the first time in aeons, and only bought one book - another addition to my Russia 1812 library (Hilaire Belloc's account, in a nice old Harper US hardback edition) - and one pack of figures. The latter were some 1/72 white metal German WWII cyclists, from Offensive Miniatures. Turns out my pal's daughter is good friends with the daughter of the guy who runs Offensive. Small world, eh!? 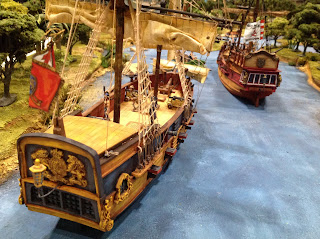 Fab boats on the (rather basic) river. 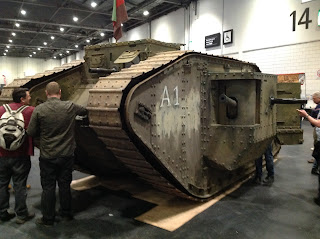 I took hardly any pics this year, as far less grabbed my eye. And of what little did, I only photographed the one game, as illustrated in the pics accompanying this post. Napoleonics, my chief and favourite period of interest were woefully underrepresented, games wise. I only found one Waterloo game, and didn't find it interesting enough to photograph.

I think in future I'll seek out smaller shows but with more that I'm after. Derby Wargames World is usually reliable that way, and sometimes Partizan also. Any recommendations or feedback from anyone reading this would be welcome. I might even try putting out feelers locally. Not so much in search of a local show - though that would be great - but rather in terms of making local hobby connections. Despite my aversion to crowds, I'm feeling a bit lonesome/isolated in my mini-military pursuits, and figure (boom boom!) some camaraderie might help motivate me into renewed activity.

Anyhoo, I'll leave it at that for now, on the Salute 2018 show report. It's certainly a whopping great monster of a show. But I'm not sure it's right for me just now. As with the very essence of our hobby, small is - can be/ought to be? - beautiful!
Posted by Seb Palmer at 06:08