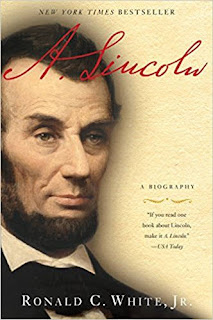 Ronald White's beautifully drawn rendering of the fascinating man who frequently referred to himself as A. Lincoln begins with roots. Lincoln saw himself as descended from 'undistinguished' stock. White's fuller picture reveals the Lincoln family odyssey, from leaving England to seek religious and economic freedom, to Abe's eventual sojourn in the Executive Mansion, as the Whitehouse was then known, to be a fascinating microcosm of a much larger American experience.

Lincoln's limited rural childhood education didn't stop this ambitious autodidact from achieving a dizzying ascent. His critics often chided him for his slow progress. But, as he himself said, though he walked slowly, he never walked backwards. Lincoln's path to power, via law and politics, which remain generally obscure and cold subjects to me, is, fortunately, sufficiently interesting to maintain attention. In his legal career seeds of Lincoln's future presidential skills can be seen growing. The images White conjures, of Lincoln riding the Illinois legal circuit as a 'Prairie Lawyer', are highly evocative. 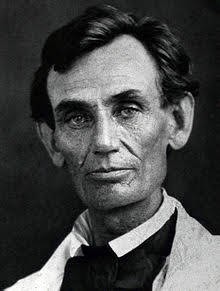 As politics takes over from law we get a portrait not just of Lincoln, but of how American politics were evolving. Initially a Whig (whatever that is*), Lincoln joins the newly emergent Republican Party. White tells the potentially dull tale of how Lincoln finally attains power - not as the nation's clear favourite, but during times of muddled, fractious sectionalism - with enough verve to make it compelling. Once in power, it may surprise some readers (it surprised me) how cautiously Lincoln initially proceeds, clearly feeling his want of education and political office-holding experience. His relations with his generals in particular being a tortuously slow and painful area of development. 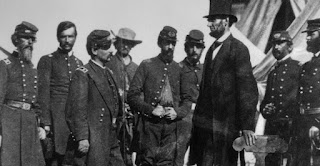 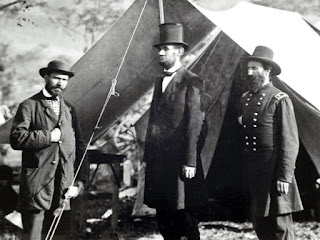 Relations with Grant were better.**

White shows how, as he grows in experience, Lincoln becomes more confident of his own shrewd judgments: his inner moral compass - a pet theme of White's - already well developed, and his faith that it will win the day, takes longer to grow. Another favourite theme of White's is Lincoln's religious evolution. Occasionally feeling it may have been overstated, I was nevertheless intrigued by this aspect of the biography, despite coming at it - I'm guessing - from a really quite different perspective. Certainly it's an important aspect of the portrait, Lincoln, like so many Americans of that era being thoroughly steeped in a particular type of deeply Christian culture. 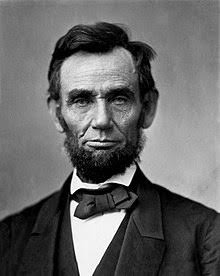 It could probably be argued - by those who know more on the subject than I do - that White's portrait of Lincoln is perhaps overly reverential. It's clear the author loves his subject. If we're being given an over-idealised portrait this might mean we're not getting the most balanced historical view. But from the viewpoint of supplying a cracking good read, the author's passion for his subject is a clear boon.

I came to this via my interest in the American Civil War. As a prime player in that epic drama, one can't help but be drawn to Lincoln's part in it. Seeing Spielberg's Lincoln only added to my desire to know more, as did the many sonorous quotes from him, voiced by Sam Waterston, in Ken Burns' superb Civil War documentary. A slim Penguin volume collecting some of Lincoln's most famously and memorable speeches and letters was my first port of call. Good as that was, hunger for deeper knowledge of this fascinating man ultimately lead me to White's weightier tome. 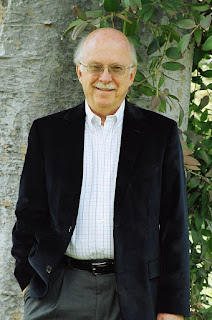 And I'm glad it did. This is an excellent book, about an uncommonly inspiring man. Lincoln's facility with language and ideas is remarkable. One of his many attractive qualities, both as lawyer and politician, and that despite presiding over a terrible civil war, is his sagaciously conciliatory approach. Napoleon was said to have had mesmerising charisma. Lincoln appears to have had a great deal also. But of an entirely different character. One quickly loses count of the number of times people come to him spoiling for a fight, only to depart as humbled, mollified admirers.

I found this book fascinating, informative, occasionally thrilling, and quite often - esp. when reading Lincoln's masterfully crafted words - moving. A study of Lincoln's life and times remains salutary. I'm grateful to White for supplying us with a highly readable account of the most inspiring of America's presidents. 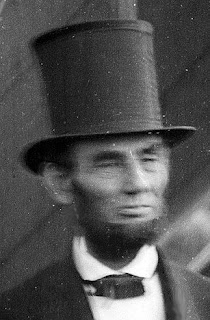 An evocatively blurred image, in his signature stove-pipe hat.

----------
* One of the few quibbles I have with this book is that White doesn't define this term; whilst there are plenty of illustrations, including numerous photographic portraits of Lincoln, a glossary would've been welcome. According to the third definition in Merriam Webster's online dictionary a Whig was 'a member or supporter of an American political party formed about 1834 in opposition to the Jacksonian Democrats, associated chiefly with manufacturing, commercial, and financial interests, and succeeded about 1854 by the Republican Party.'

** It's interesting to note both the military men pictured are affecting a 'Napoleon' (the hand in the jacket/waistcoat/top, itself a faux-Roman affectation), whilst Lincoln simply stands there, rather awkwardly, like a beanpole, in his normal manner.
Posted by Seb Palmer at 09:35