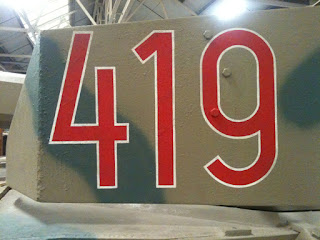 Nicely executed turret numbers on a Pz IV at Bovington.

NB: I drafted this post mid-February, but never got round to completing it, 'cause of the ubiquitous demands of the new home. Sometimes I will schedule such belated posts so as to appear more chronologically correctl. In this instance I decided to let it appear out of sequence.

I drove down to Bovington Tank Museum yesterday, with my modelling pal Paul. It was a bit of an epic trek for a day-trip, at about three and a half to four and a half hours each way! February 11th saw the Museum hosting a Model Expo, with large numbers of modellers showcasing their handiwork, and a smaller quantity of traders helping us part with our lolly. 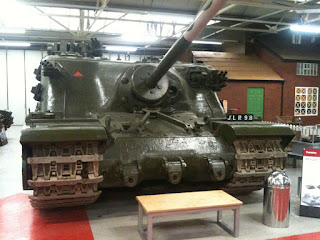 The Tortoise: a hard-shelled monster! 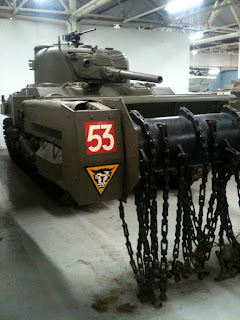 A Sherman 'Crab' flail tank, one of Hobart's Funnies.

One thing I noticed, and it almost makes me feel guilty admitting it, was that I was less interested in viewing the models exhibitors were displaying than I was in viewing the real tanks, or buying books and kits, etc. Given the efforts modellers put into their craft this struck me as kind of tragic. 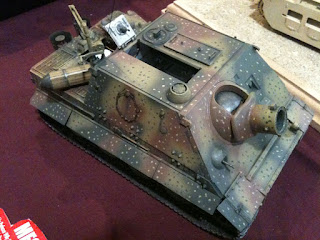 The only decent pic I took of any models, was this one of a lovely SturmTiger.

Having said this, I did take a look at most of the models on show. But for the great majority it was the most cursory of glances. This disparity was echoed, somewhat ruefully, in a notice on one stand that read 'hours to make, seconds to destroy'!

And my interest in this aspect of the show was reflected in my photos: lots of pics of the museum's exhibits, hardly any of the models. I do regret not photographing or filming the larger remote-controlled tanks. The 1/6th scale stuff - Action Man on steroids! - was pretty amazing. 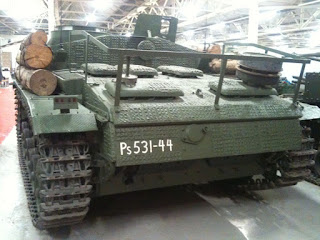 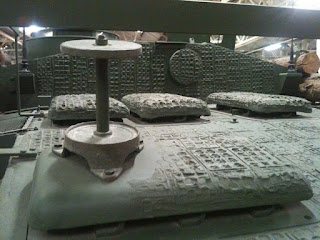 Visits to museums are ace for scoring some interesting detail ref. 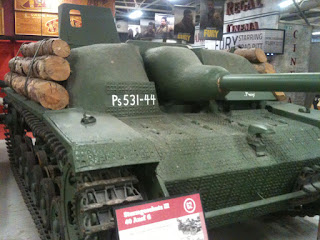 I've not seen a Stug in uniform green like this elsewhere.

Of course, I over-spent. My haul of kits was gratifyingly large, and included four Armourfast Panzer IVs, a Trumpeter tank transporter, a Zvezda gun and crew, and quite a few planes, including some by the defunct British company Frog, a brand that's new to me. All WWII German, all 1/72.

Book-wise, I bought some highly specialised reference material, including Valiant Wings titles on the Blohm & Voss Bv 141, and Dornier Do 17Z, a mag on 'Secret Bombers of the Third Reich', and a few misc second-hand titles, on Stukas, the Luftwaffe and WWI warplanes. One of these was a larger than A4 hard book dedicated to the Ju 87, or Stuka, which had some lovely three or four page spreads. 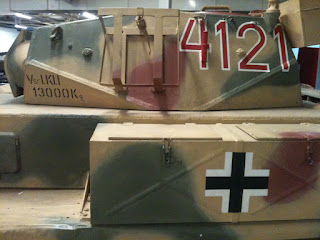 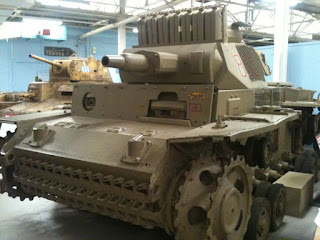 The only hobby accessory I purchased was some 0.4mm masking tape, for masking canopy frames. I wish I hadn't bothered with this, as it happens, as I'm not sure I'll use it for the purpose I bought it for: I want to mask the 'glass' panels, not the metal frames! Doh!!

Paul had advised me to invest in some adhesive foil for this job, but I couldn't find anyone selling any. Just goes to show how sometimes a fog descends on my brain at these events. The urge to spend overpowers ones critical faculties. I think our hyper-materialist culture ingrains in many of us, myself included, the sub-Descartesian pseudo-philosophy; 'I spend, therefore I am'! 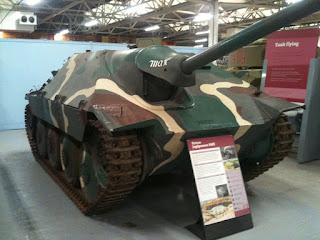 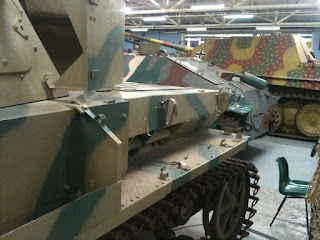 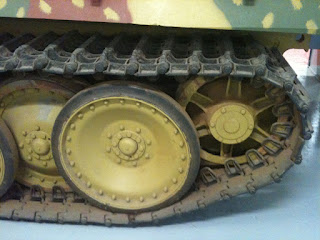 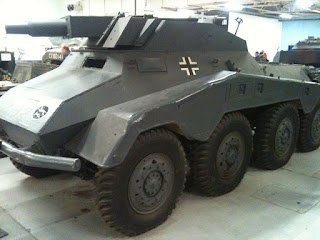 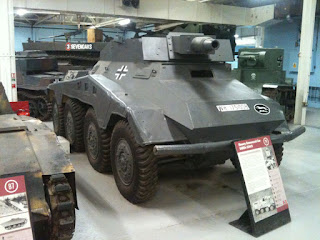 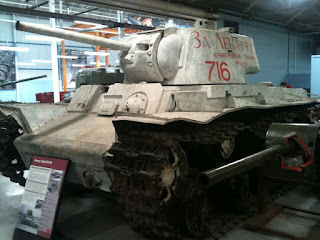 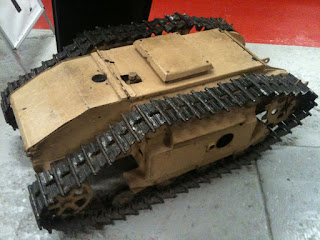 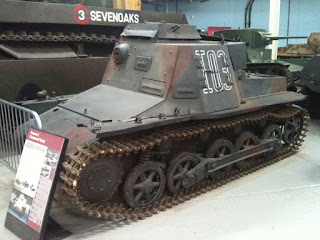 It's hard to credit that a vehicle such as that pictured above could be part of the 'armoured might' of blitzkrieg. It looks more like a tracked pram or bathtub than a tank! I do like the stencilled tank ID, in white outline. And the early war gray-brown camo is cool.

As mentioned above, I overspent, as is my usual MO these days. This time I bought loads of aeroplane kits: the Mister Kit Fiesler Storch was one of several different models of this gangly plane for sale on the Valiant Wings book stall. I love the Roy Cross artwork on the Airfix Fw 189. A beautiful painting! One of these is a recurring baleful presence in the superb film Come And See, reviewed elsewhere here on't blog. 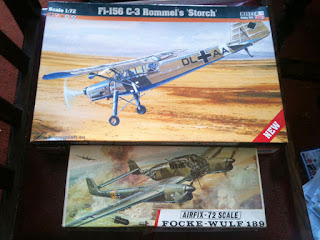 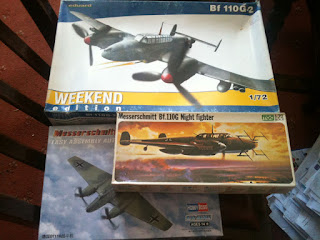 I bought three Me 110s, bringing my total of these fab looking 'Zerstorers' to four (two by Edouard, One a frog, and one (?)). The Do 17Z and one of the Me 110s are by Frog, a manufacturer I'd not encountered (or even heard of) before. I covet one of their Arado 234 Jet Bombers. But the stall which was selling the Frog kits didn't have that particular model. Like classic Airfix of yesteryear, the  Frog kits often have lovely box artwork. 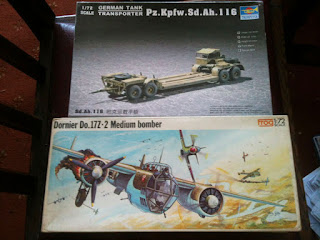 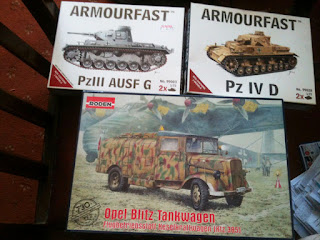 Some land based stuff!

In my more normal land warfare niche I bought a Trumpeter Tank Transporter, and two sets of Armourfast Panzers. The latter filling a bit of a gap in my German armour collection with some medium Pz III and IV tanks. And finally, in terms of kits at least, I bought a rather lovely looking Roden Opel Blitz Tankwagen. I also bought a few books, mostly Luftwaffe ref. Rodent are another brand that often have fab box art, something I always appreciate.

My swag from the show is shown in the pictures above and below. What I really need to do is to start in on building stuff from my ever-increasing stockpile. 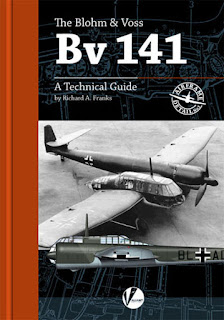 Bought this to help with my Airfix Bv 141 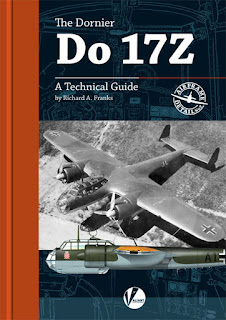 The Valiant Wings titles are superb, being packed with more info than I ever realised I could want to know, including lots of great photos and a good number of colour illustrations. Somewhat to my own surprise, if I'm 100% honest, I found I really did want to know all the minutiae! It seems madly extravagant to me to be buying books like this that cost more than the models themselves. But it gives me so much pleasure, perusing them, and using them to help build my kits, that I just go with it.

It was a good day out, despite a number of Bovington's German Tiger tank variants I would've loved to have seen not being on display. I made up for this loss by spending yet more money, acquiring some nice green Dad's Army socks, and a Tiger Tank T-shirt from the museum's gift shop!

[*] Of course no weapon intended to maim and kill can really be thought cute. Very tasteless of me.
Posted by Seb Palmer at 15:40