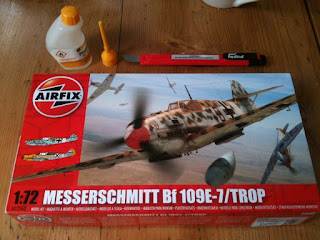 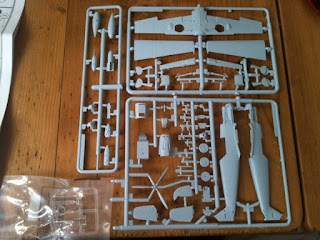 My wife and I went on a later than normal summer break a short while back, the delay being occasioned by our getting a new home that's in need of substantial work. Whilst the short break was welcome respite from toil, both domestic and professional, I discovered I was in no mood to take any further time out from my military interests. 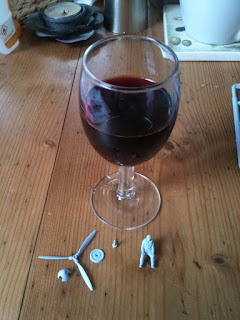 My small port glass looks positively Floydian (Keith, not Pink), next to the pilot and prop!

So, I took James Holland's superb War In The West (pt. 1), and began chomping through that voraciously. I even successfully persuaded Teresa to watch Robert Shaw as Custer of the West (a film I saw and loved as a kid!). And, coming to the point of this post, somewhat to my own surprise, I even bought a model - with a view to building it whilst we were away as well - in a shop near where we were staying! 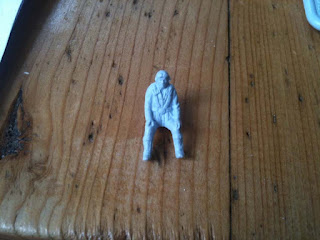 The pilot figure is rather nice, to my eyes.

The model in question is the 1/72 Airfix Me109 (E-7/Trop variant). This and another older Airfix Me109 kit were the only German WWII kits the shop had. I was forced to buy a knife, glue, and some paints and brushes as well. [1]

The kit is - and this is especially noticeable after recently working on the old Airfix 1/76 'Katy' ambulance - wonderfully crisply moulded, requiring minimal tidying. And the fit of parts is also, by and large, excellent. 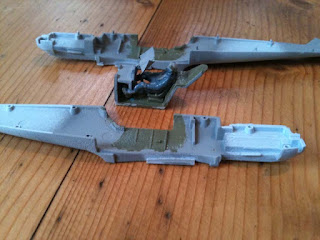 I bought two Vallejo acrylics and a can of car undercoat. The latter was both more expensive than usual, and seemed coarser, leaving a textured 'bubbly' coat. 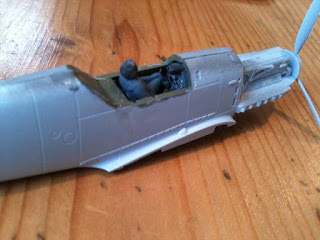 Decals were applied at the wrong point! The darker flying helmet was painted using a home-made black!! [2]

I made my task tougher by having such a minimal toolkit, some of which - the £1.49 knife, for example - was plain awful. I also did a few dumb things, construction-wise, such as gluing the pilot and cockpit to one half of the fuselage before adding the control panel decals! My attempts at fabricating home-made paint weren't too successful either! 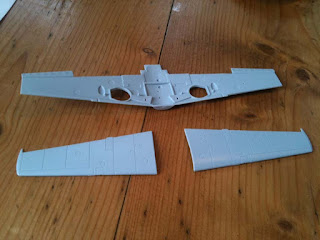 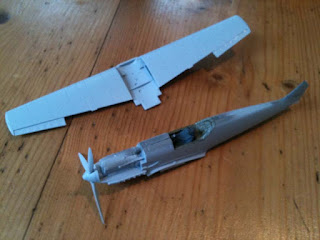 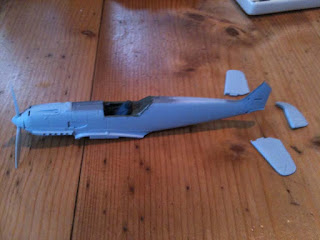 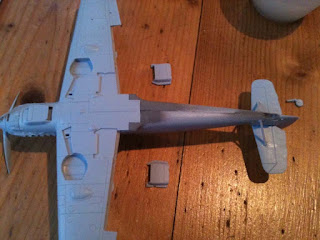 We popped in to the 'office', mid-vacation, enabling me to get some more painted detail onto the pilot/cockpit. My goal is to finish this plane and the 'Katy' ambulance before I resume work at the coalface. In the meantime, this post shows how far I got during late-summer-vacation, pt. I. 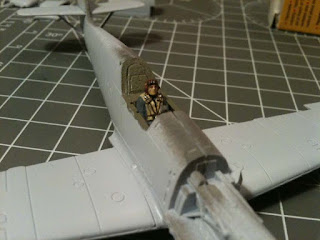 How the pilot/cockpit look at the time of posting.

Did a bit more this evening. Only the canopy and aerial left now, and then painting/decals, of course. Some of the detail under the wings (little aerial like things) is very fine/fragile. Indeed, I broke several parts separating them from the sprues. 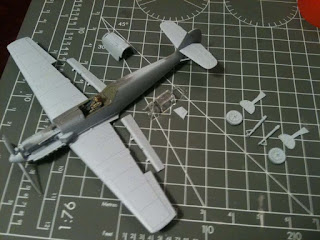 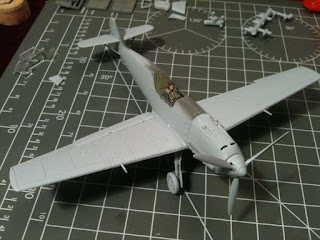 [1] This impulse purchase has convinced me that I need to sort out a portable modelling toolkit!