Having been out of the loop for a while I thought I'd wade back in with a double-whammy: a film review and a kit build (only partial at the time of posting, I'm afraid) in one post.

I've been watching loads of war films lately, mostly set in WWII. And most of them have been pretty good. There's only been the occasional below par offering, and only one outright turkey. But I'll be posting on many of these soon, so I'll save further info for later posts.

Ice Cold In Alex is both an unusual war film, since most of the drama relates to four people in an ambulance crossing an otherwise mostly empty desert, and an  excellent one. After watching the film a few weeks back, I decided I'd like to make a K2 'Katy' Ambulance. And, perhaps, maybe even make an Ice Cold In Alex diorama. 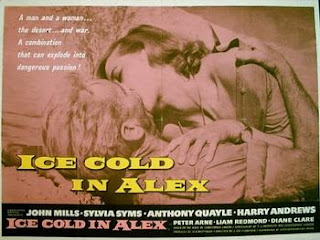 Ice Cold In Alex is a bona fide classic WWII movie. That said, it's also pretty unusual for the genre, broadly speaking, in that it's more a character study, and for the most part concerns just four individual battling their demons and the harsh environment, the desert, as much as the Germans.

I don't wish to offend any readers of this 'across the pond', but it shows a fundamental misunderstanding of the film that the version released Stateside was cut by about 50% and remained Desert Attack! The uncut version is 130 minutes long, whereas the U.S. edit is only 76! 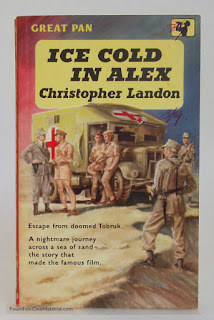 The film is based on a book of the same name by Christopher Landon, and purports to be a true story.[1] We meet Captain Anson (John Mills), already the worse for wear, slurring his words and drinking spirits, in a Tobruk HQ. Anson's commander, a Brigadier played by Liam redmond, who we first see bathing in a tub, briefing Anson during a bombardment!

Anson is ordered to set about evacuating a column of ambulances from Tobruk, bound for Alexandria. But the Brigadier requests he stay behind and accompany him, along with his MSM, Tom Pugh (the ever dependable Harry Andrews, affecting a strange west-country-cum-Norfolk accent!). Two nurses are added to the ambulance crew by accident, when they're left behind. 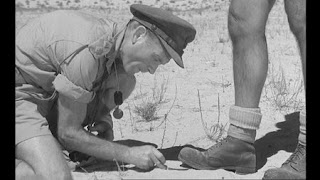 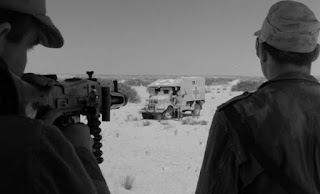 The delay in setting out means we never see the main column of ambulances. And, indeed, after an attack results in the death of the Brigadier (and his driver, another war movie stalwart, Allan Cuthbertson), Anson an co. find their retreat route cut off when a bridge is blown just as they reach it. Shortly after this they pick up Captain van der Poel (Anthony Quayle). And thus the adventure begins.

As ever, I don't want to give too much away for those who haven't seen the film. But it's a corker. Military buffs such as our crowd will inevitable be disappointed that the few Germans Anson and friends meet are usually in American half-tracks. But the story is great, with the main enemies being Anson's personal demons, and the desert. 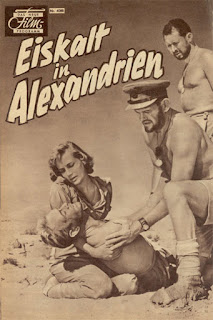 Mills, Sims, Andrews and Quayle, all looking overheated on a cool German poster for the film.

All the four major leads, Mills' Capt. Anson, Andrews' MSM Pugh, Quayle's van der Poel, and Sylvia Sims as the very foxy Sister Diana Murdoch, are superb. They are all characters you grow to really love and admire, as they fight their way over minefields, through enemy held territory, battling booze, quicksand and even tackling an excellent espionage subplot.

The famous theme, that both gives the movie its title and its iconic end sequence in the Alendrian bar, has even been used in two beer adverts. One's a spoof - from a series called 'Holsten-Pils Productions' - in which Griff Rhys Jones is interpolated into vintage footage from this and several other old films. The other's a riposte to the Holsten Pils ad by Carlsberg, and simply shows Anson downing the pint, which clearly shows the Carlsberg logo. 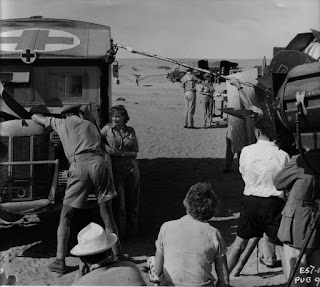 A nice pic of the cast and crew during filming. [2]

The whole film is excellent, filled with not just action - and even then not the kind of action modern films rely on (explosions, fast cuts, etc.) - but, and far more importantly in my view, with character and feeling. I'd seen it before, many moons ago, but was blown away seeing it again. So much so I watched it again with friends! 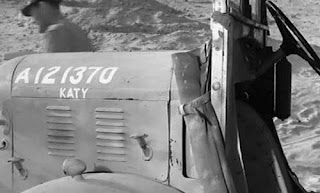 It also inspired me to search around for model of the 'Katy' K2 Austin ambulance, a vehicle that is almost a character deserving of a credit of her own in this wonderful film
---------- 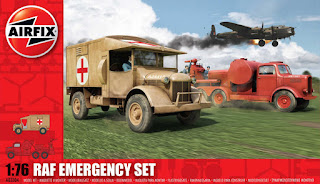 So, from the film to the model.

I'd have liked to find a 1/72 version of this vehicle. But the only thing I could find that was close, was this RAF Emergency Set, by Airfix, which also includes an Austin fire engine and some RAF ground crew.

One thing that happened, mirroring something that happens in the film, is that, on opening the box, I discovered my kit was missing a suspension spring for the ambulance. In the film they break one, and replace it, in a very memorable scene in which van der Poel literally shoulders the heaviest share of the work. 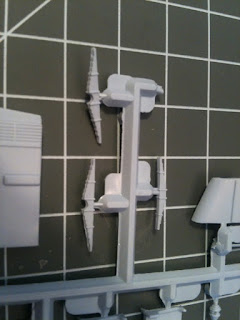 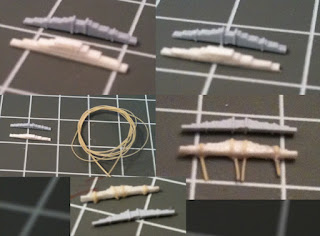 I had to scratch-build a new spring, which I made from thin plastic card and stretched sprue. My photos of this process are woeful. But perhaps thats for the best? As my spring, whilst fit for purpose (and probably unlikely to ever be seen anyway!), was not a perfect copy! 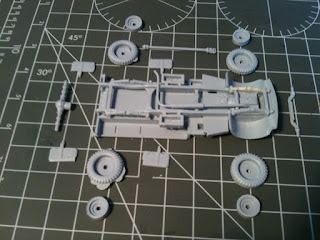 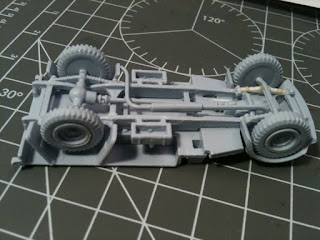 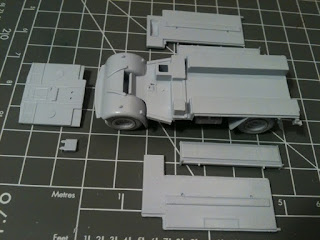 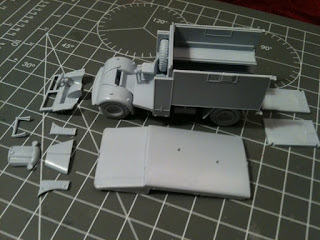 The model is a fun build, although it's an old Airfix moulding, with a lot of tidying required (much flash to trim off, and ejector pin marks to remove or fill). I intend to model mine on the vehicle in the film. And I might even attempt either converting some figures, or even sculpting them, so as to provide the four key characters. 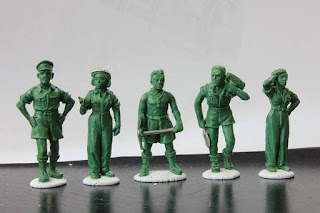 Looks like I'm not the only one to be recently inspired by Ice Cold In Alex! [3]

Not sure whether I'll have any door or windows open. And the build has currently stalled momentarily anyway, as I prepare for the new school-term's teaching, and decide about the interior detail. 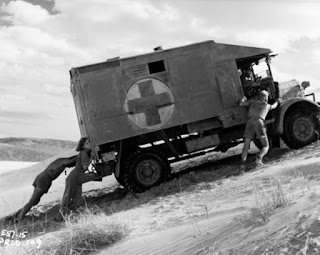 I might go for this, as a diorama option. 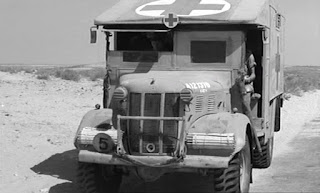 Some interesting details can be seen here: a tow cable; rolled mats on the front mudguards; painted 'frames' on the windows; the rooftop red cross logo in a different place to that suggested by the Airfix kit.
----------

Now, I'm not usually one for any royal nonsense, but I did find the following pictures interesting: 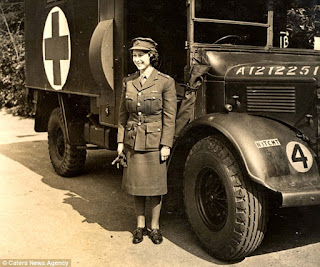 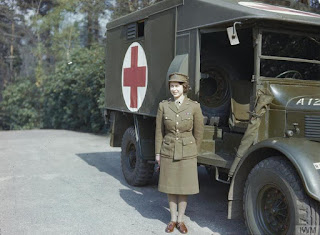 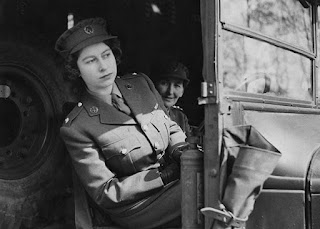 Princess Lizzie, as she was then, learning to drive a K2 Austin ambulance; 'doing her bit', I guess. I don't know that this was anything more than a publicity exercise - I doubt she was an active ambulance driver (correct me if I'm wrong!) - but the pics are great nevertheless.

[1] I haven't looked into the truth (or otherwise) of this claim. Anyone else know anything about it?

[2] StudioCanal have some nice galleries of still from this film, which can be viewed here.

[3] I can't recall where I saw this pic. But apparently it's a set from the Perry's workbench. So I suspect they're 28mm?
Posted by Seb Palmer at 09:59