Napoleon at The Fitz: An exhibition of Napoleonic themed prints at the Fitzwilliam Museum, Cambridge (UK). 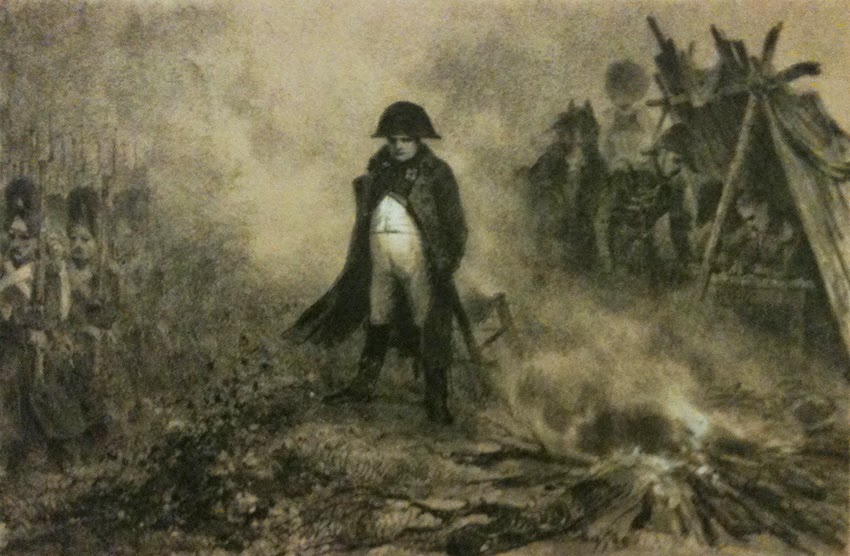 Simply title 1813, this lithograph by August Raffet helps mythologise the 'little corporal'. His ADC's are busy behind him, as he stands heroically beside a bivouac fire, as some ghostly bearskin wearing grenadiers march past.

Much to this old grognard's delight, an exhibition entitled Modern Heroism: Printmaking and the legacy of Napoleon Bonaparte is currently showing in a small room at the Fitzwilliam Museum, Cambridge.

NB: Please note, the images that appear here are, unless otherwise indicated, taken on my iPad at the exhibition, and Photoshopped a little to improve the contrast, etc. Consequently they are not of museum display quality! If you want that, go see the show!

I've always had a soft spot for The Fitz, as this wonderful museum is known to many Cambridge locals.  But in all the time that I've been visiting the museum - and that goes way back to the years of my childhood - I've never known the institution to have held a show of any size, large or small, dedicated to the Napoleonic era. 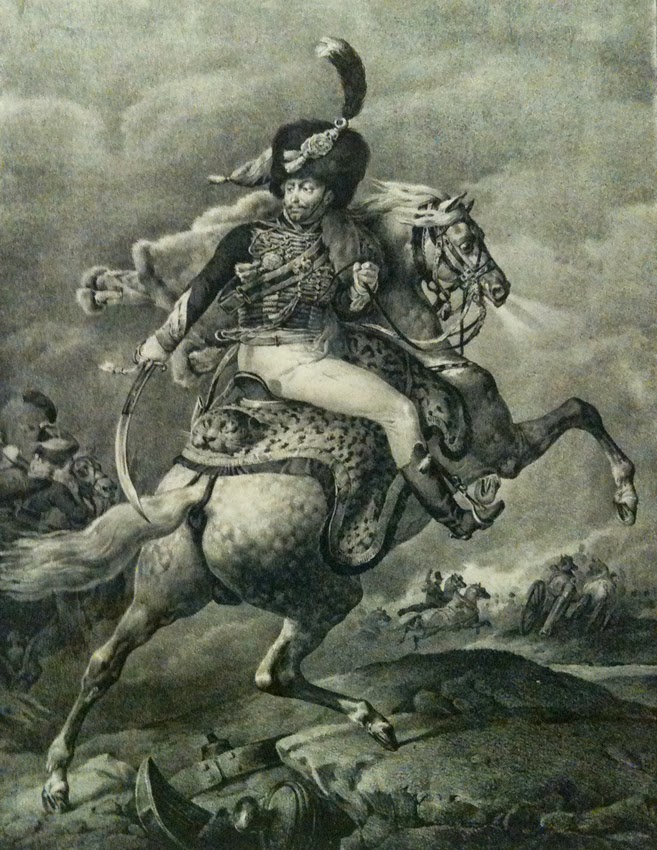 As a regular visitor to this venerable institution, which really feels like a London museum, having an exhibition dedicated to a passionate interest of my own feels like a dream come true. Actually Cambridge is spoiled, in that it has way more than normal the number of museums for a town of its size, many of which punch well above the average weight of your more common parochial town museum. The Fitz is the prime exemplar of this lucky situation, looking like a scaled down British Museum of sorts, replete with an impressive neo-classical façade, and some very regal lion statues. 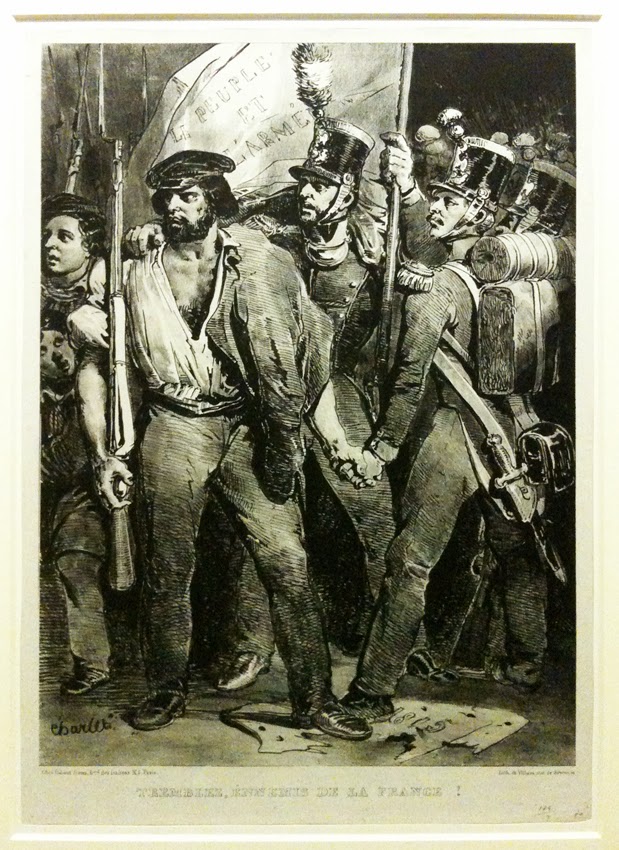 The sort of print that might appeal to uniform buffs. Of course it would be more helpful if in colour!

I've been told more than once that these were models for some lions in London (Trafalgar Square... are there any lions there?). However, my Google researches threw up no such connections. But I did learn that according to old folklore 'when the Church of Our Lady and the English Martyrs’ clock strikes midnight, the Fitzwilliam Lions rise from their plinths and make their way to drink from the gutters that run along Trumpington Street, a few metres from where they sit'! 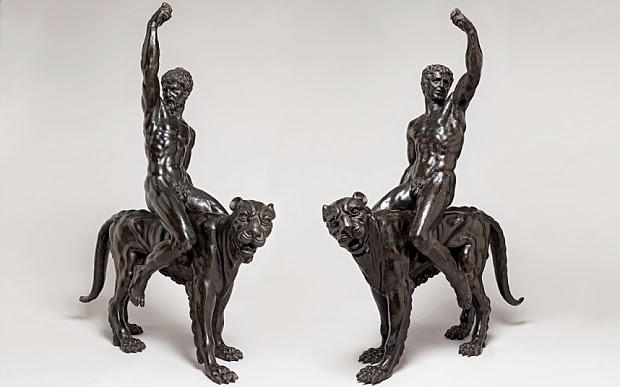 Anyway, moving on from the lions, and glossing over the much more trumpeted Michelangelo sculptures that are currently on display (pictured above; you can read about there at the museum's website, or in this Guardian piece, if you like), let's get to the Napoleonic prints. The prints are culled from the museum's extensive collection, and number amongst them such illustrious and well known names as Delacroix and Gericault, both known for famous Napoleonic imagery, and the slightly later satirist, Daumier. 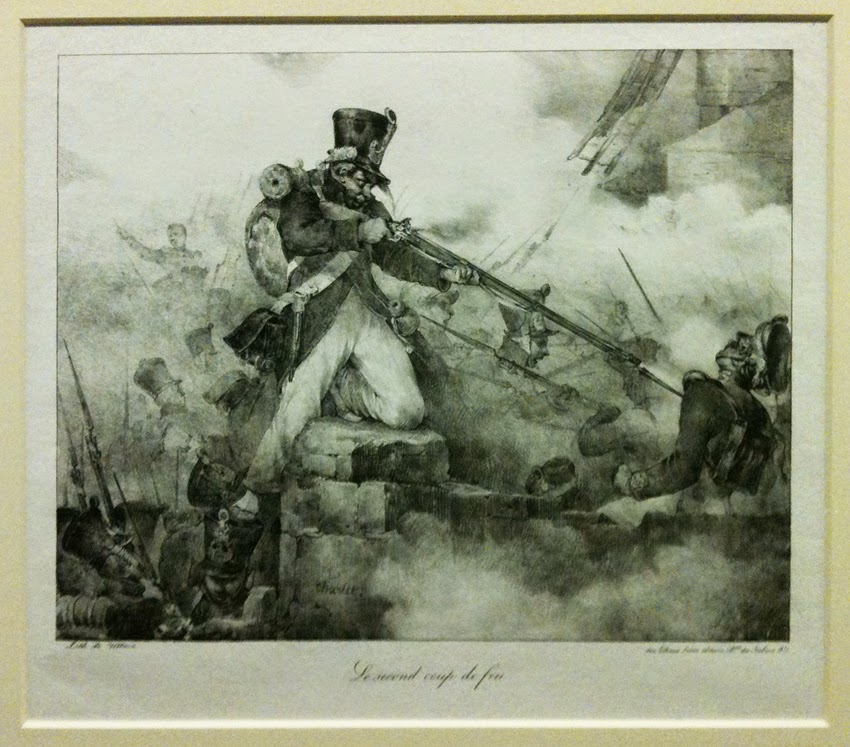 Pretty damn heroic! and living up to the exhibition title. This one's by Nicolas Toussaint Charlet, and is called At the second shot.

As much as I loved the work of these better known artists (and the British satirist Gillray even gets into the picture), the real delights for me were Charlet and Raffet, neither of whom I knew about until seeing this show. And there are of course many others. 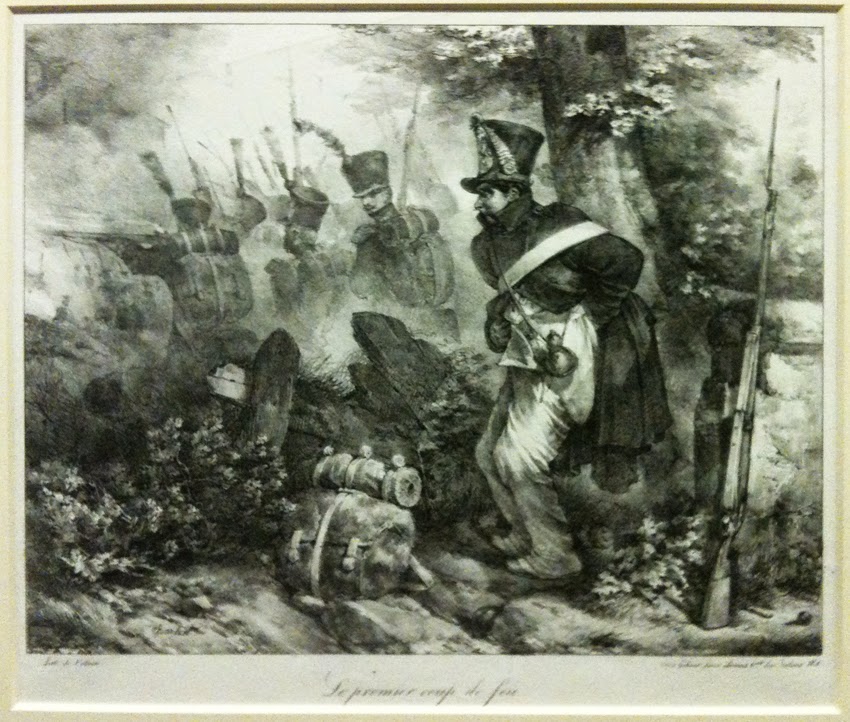 Rather less heroic! At the first shot, by Charlet (1824). Perhaps this guy's not quite living up to the exhibitions title? [1]

Alas, the show is deemed, so it seems, to be too minor to merit a catalogue, or even any postcards. Damn shame! But the museum, which used to forbid photography, now allows it. So you can take snaps to your hearts content. I've catalogued the entire show and all the accompanying texts, for my own refence and general enjoyment, a small portion of which pics and info adorn this post. 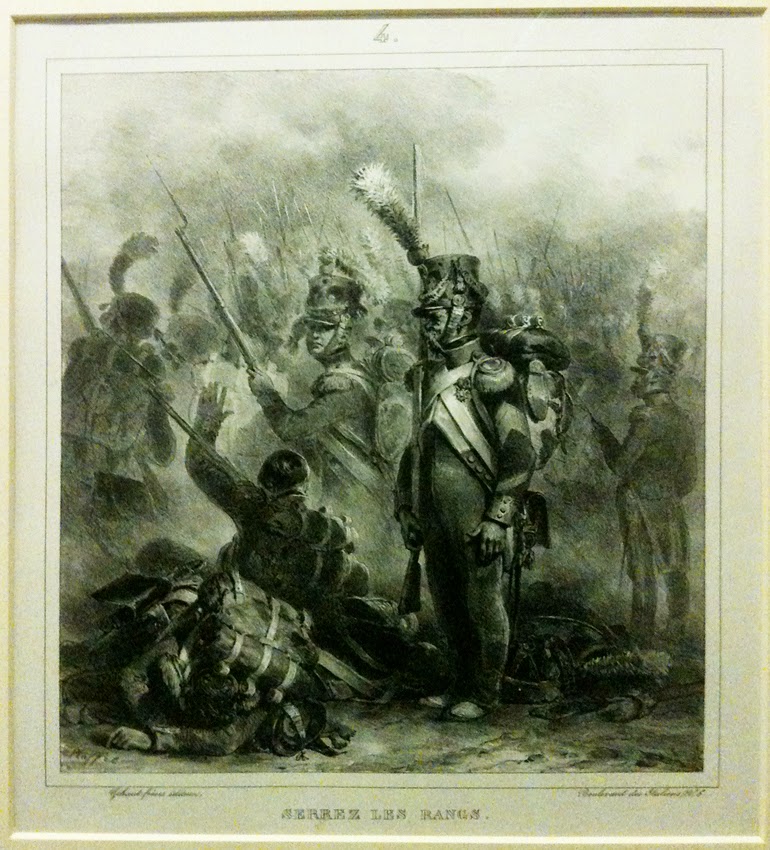 'Serrez les rangs!' An veteran sergeant remains calm amidst the battlefield carnage. Listed at the Fitz as Close Ranks, by August Raffet (1831). 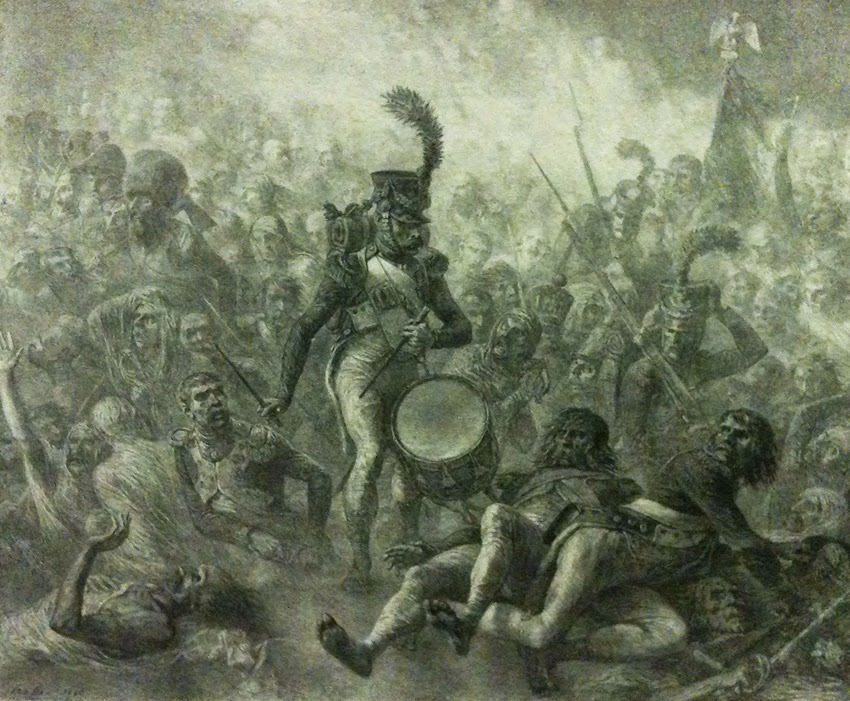 Most of these prints are actually post-Napoleonic, and some, like Le Réveil (1848), also by Raffet, clearly illustrate the sense of loss felt in France, with the passing of Imperial glory. Here a drummer summons dead soldiers to further glories in some sort of martial after-life!

The show began on February 3rd, and runs until 28th June. If you're anywhere Cambridge during this period, go and have a look. It's well worth it. If you do, drop me a line via the comments, and we can meet for a drink in the lovely café, and talk Napoleonic turkey. 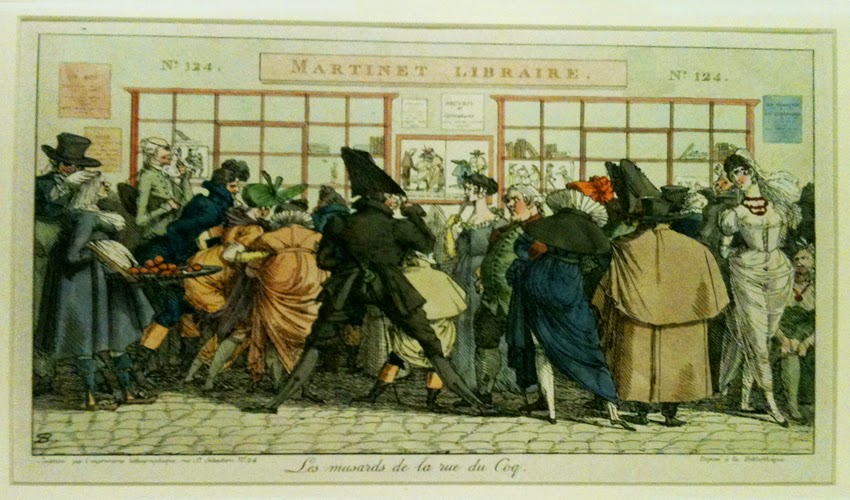 The metropolitan French enjoyed print shop windows, much as their English contempories did. This one's by Pierre Nolasque Bergeret, and is called Dawdlers on the Rue Du Coq (1818). 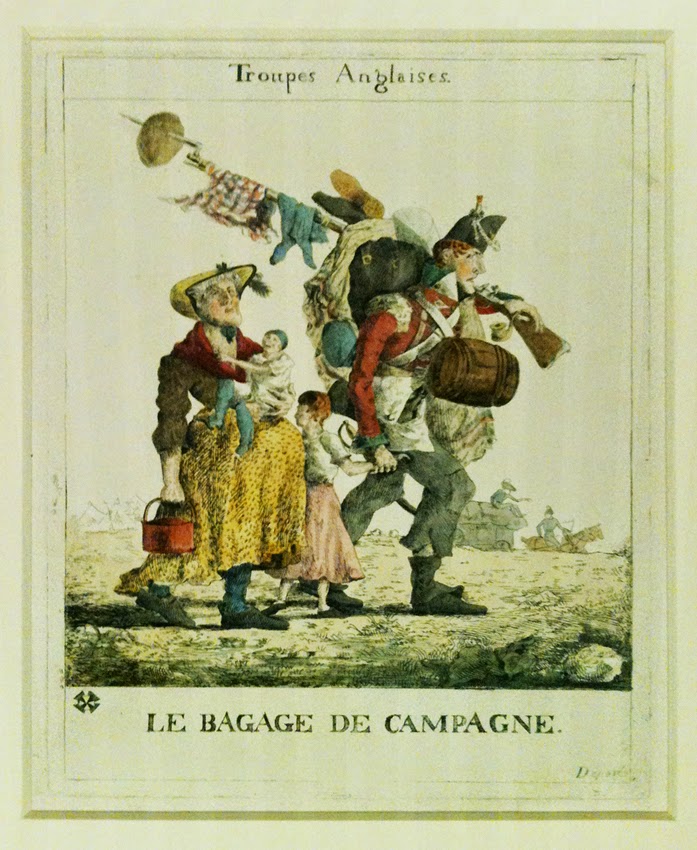 An example of their print shop wares: this one by the famous painter Eugéne Delacroix, depicts a British soldier avec 'le bagage de campagne'! 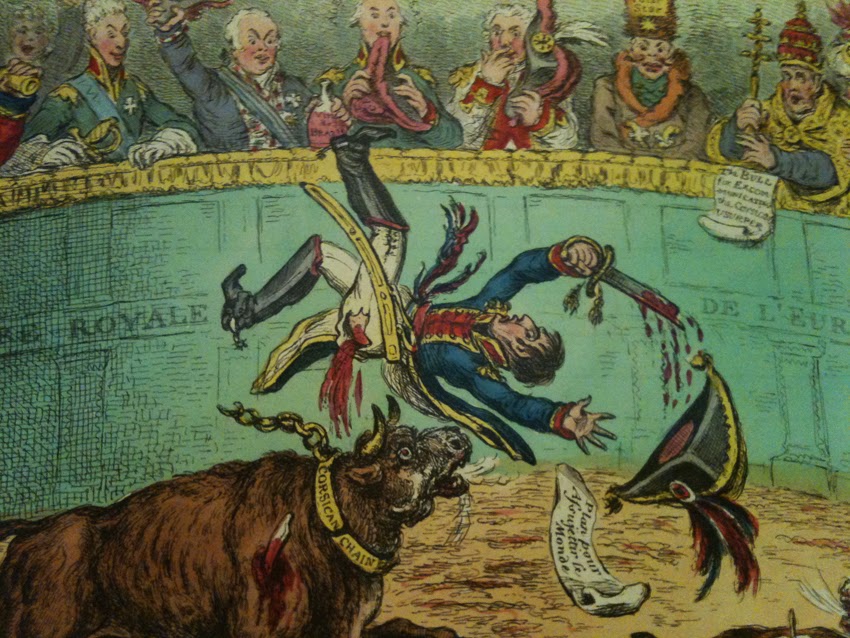 Gillray's The Spanish bull fight, or the Corsican matador in danger (1808). Helping to prove that British satirical prints were a cut (across Boney's rump, in this instance), above French - or any other European country, for that matter - equivalents.

Each of the 30 main prints and ten supplementary prints - the 30 are ranged around the walls, the ten are in cabinets - has a small plaque conveying the basic information about it, plus there are also two general signboards, explaining basic stuff about the era, such as key dates, and simple summaries of the artisitic milieu and techniques used, etc.

It's a small but excellent show. I'd highly recommend going, should you be in or near Cambridge before the end of June.

[1] Actually these two 'shot' prints were a pair: the featured soldier in both being one and the same man. In The first shot, which rather disingenuously comes second in my listing above, he's a combat virgin, cacking his breeches. But by The second shot he's become a true Napoleonic warrior!