A momentary return to things Napoleonic 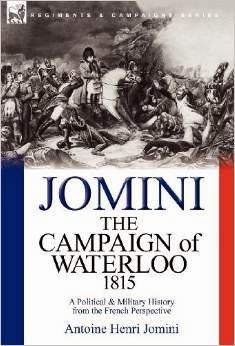 Despite all the WWII 1/72 armour I'm building, I'm still avidly reading Napoleonic material, with a particular emphasis on Waterloo-themed works, it being 2015 and all.

This slim paperback from Leonaur was originally just one small part of a much larger multi-volume work by the famous Napoleonic military strategist Antoine Henri Jomini. The short extract is presented here as a work in itself, centred around 130 pages of unbroken text - i.e. there are no subdivisions such as chapters - book-ended by a brief appendix [1] and an even shorter preface, both also by the author.

One might well wish, as I did, that a slightly stricter editorial eye had been applied, as sadly this book is marred somewhat by numerous typos. Was some kind of scanning software used in preparing the book? Most instances are fairly innocuous, such as 'but' rendered as 'out', on the first page of the preface, or the several instances where 'march' became 'inarch'. But there are occasionally more egregious occurrences, such as when Ney becomes Key, or, even worse, when what results is pure nonsense, as on p.88, where we're informed of 'three corps, together 00,000men'!

Having just come to this from the very vivid 1815: The Return of Napoleon, by Paul Britten Austin, this also felt, initially, like a rather dry account. Indeed, much of this book is, in fact, more philosophy of government (what Jomini himself at one point refers to as 'governmental metaphysics') than campaign of Waterloo. And Jomini himself, on p.59 in this rendering of his text, confesses that 'I perceive that I am led away by my theme, and that it is time to return to Napoleon...' Too right, I thought!

It's not actually until p.78, i.e. more than halfway through the core text of this little book, that the narrative finally turns in earnest to the subject Leonaur have chosen for their title, the campaign of Waterloo! But once Jomini gets on to the subject the title suggests is the central theme of the work, the prior effort starts to feel worthwhile. And also, once Waterloo is over, and Jomini is once again 'led away by my theme', one realises that this is all very worthwhile material, even if much of it falls outside of the area suggested by the title. In fairness the books subtitle, 'A political and military history from the French perspective' does hint at this broader brush-stroke overview.

Given the way the European powers ranged against Republican and Napoleonic France noisily waved the banner of legitimacy during this period, it might be surprising to find an heir to the French Revolution, such as Jomini, defending the institution of constitutional monarchy, as he does at the outset of this extracted selection from his writings. As already alluded to, he returns to this theme once Waterloo is over, and, despite this at first appearing a bit off-topic, it's actually very interesting - the essence of the matter being the issue of powerful centralised leadership vs. potential mob rule - and Jomini writes about it all very well.

Perhaps also this is simply, and despite the typos, just a better translation than some foreign writers are apt to endure? I recall the Greenhill Books Clausewitz work on the 1812 campaign being an uncommonly hard slog, simply terms of reading, as the Prussian author's writing either was, or had at least been rendered as, a very verbose and stodgy style. Sadly I couldn't find anything anywhere in this edition of Jomini's writings crediting the translator. A dedication is reproduced at the beginning of the book, and suggests it was the work of an American, as it's dedicated to 'graduates of the The United States Military Academy of 1849 ... By their classmate.' 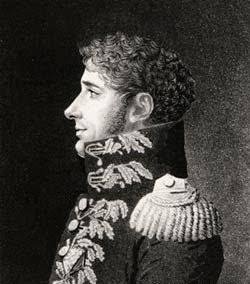 Jomini at the time he was in French service. He won the Légion d'Honneur whilst attached to Napoleon's HQ at Eylau, and was Ney's chief of staff at Lutzen and Bautzen.

On numerous occasions Jomini - born in Switzerland, of Italian descent, and during almost all of the Napoleonic wars serving with the French - is at pains to point out that he's being as impartial as he can. This has a bearing not just on his more general political stuff, but also on the events of the Waterloo campaign itself, and especially those areas somewhat obscured by both the fog of war, and the rival claims about what actually either happened, or was intended to happen.

He considers all the options, as the campaign unfolds, as befits a famous military strategist. But unlike Clausewitz, who comes over as a pompous ancien-regime 'you don't want to do it like that' know-it-all (at least that's how he struck me in his 1812 book), Jomini is, as one might perhaps expect, or at least hope, in the post-revolution meritocracy of Napoleonic France - recall Napoleon's pride at being elected to the Institute of France, and how he took all those savants to Egypt [2] - cut much more from the Enlightenment man cloth, despite his quite conservative political stance.

Jomini's also very candid and even-handed regarding the errors the French made, including Napoleon himself, and particularly so between the 16th and 18th June, noting how, in contrast, Bonaparte's enemies exhibited both clarity of thought and celerity of execution. Having said this, he regards, and ably defends, Napoleon's actual plans as the best chance for French success, and attributes their failure to a combination of factors, including French mistakes, the evident learning - schooled by Bonaparte - of his opponents, the fact that the French didn't rally behind their national cause and leader in anything like the way the Russians or the Spanish did under French invasion, and, in the longer term, the overwhelming odds that France and Napoleon faced.

Jomini chooses to deal with the several days of battle - covering the build-up, Ligny and Quatre Bras, and finally Waterloo itself - in, for the most part, chronological order, and, naturally, from the French viewpoint. He does have to double-back on himself a little to catch up with the movements of Grouchy and the Prussians, but the way he covers it all is, in my view, and given the complexity of the situation, an exemplary model of clarity and simplicity; easy to follow, and enjoyable to read. [3]

Given the abundance of very jaundiced coverage an English reader has to contend with when reading about Waterloo - my childhood introduction to the subject was a fairly chest-thumping piece in an Eagle Annual about the charge of the Scots Greys and the capture of a French Eagle - it's refreshing to get an eloquent and intelligent account from the French perspective. And, unlike the Clausewitzian treatment, which, whilst worth reading, was a real chore, this is both obviously worth reading, and very enjoyable. And that's despite the lack of chapters and the numerous typos! 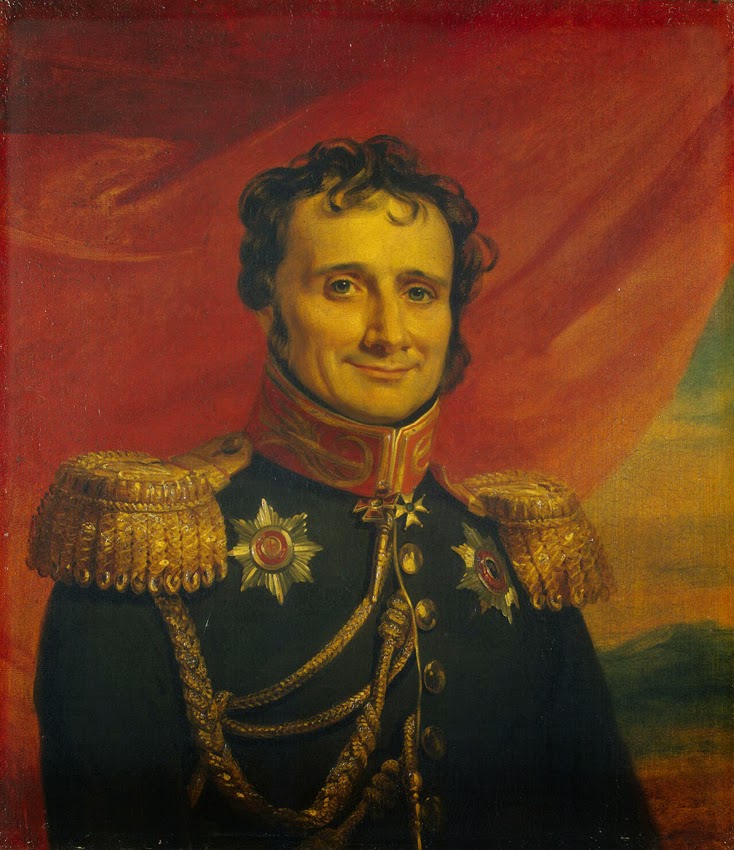 This later portrait of Jomini was painted during his stint in Russian service.

As noted above, whilst Jomini's not a Frenchman born and bred (neither was Napoleon!), he nevertheless took part in the events of this period in French service, and was deeply personally  involved in the military glories of the Imperial era. Unsurprisingly he's angry at how the chambers, or the doctrinaires and utopianists, as he calls them, meaning men like Benjamin Constant, conspired against and undermined Napoleon at the end: 'all their measures ... attest a miserable spirit of mediocrity', he observes, eventually noting (with evident satisfaction) 'Lastly, we will also recall the fact, that the chambers receive the reward of their deplorable conduct.'

One might be forgiven for feeling Leonaur have bulked out what seems like a very small portion of an originally much larger and more comprehensive work by Jomini. This could even be construed, especially during the 2015 bicentennial of Waterloo, as rampant opportunism. The slightly slap-dash quality - a visibly pixellated cover image (on an otherwise very nicely designed cover) and numerous typos - doesn't help.

But this is still an excellent account, and a worthwhile addition to any Napoleonic or Waterloo themed library. It very helpfully saves one from needing learn to read French (although there are one or two untranslated quotations and terms), in order to wade through Jomini's original multi-volume work. I'm very happy, far all that might be wrong with it, that Leonaur have made this material easily available to those, like myself, with an interest in such things.

[1] The 15 page appendix comprises Jomini's replies to correspondence from The Duke of Elchingen, son of Marshal Ney, and concerns the latter's attempts to vindicate his father's actions, and exculpate him from some of the blame that was attaching to him after the disastrous defeat at Waterloo (and his subsequent execution). This is doubly interesting as Jomini had spent periods very close to Ney, as a high ranking member of his staff. He attempts to address this thorny issue with his characteristic even-handedness. The whole episode is intriguing in showing how history plays out so close to the events, with the confusion that arises when multiple variations of a story are vying for acceptance.

[2] Thanks to which knowledge of ancient Egypt increased massively, both through the works eventually compiled under the auspices of Denon, and also as a result of England ultimately taking custody of the Rosetta Stone, eventually leading to the cracking of the long-unsolved translation conundrum presented by Egyptian heiroglyphics.