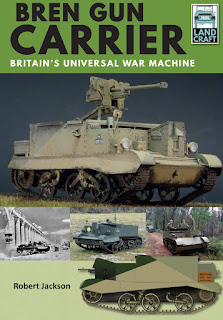 Fantastic! I'm a little surprised at how I've grown to love, or perhaps rather become fascinated by the 'umble Universal Carrier. I can't deny that seeing YouTuber Lindybiege choose it as his second favourite tank (!?)* has been an influence. Prior to that I'd always rather cocked a snook at this little vehicle. 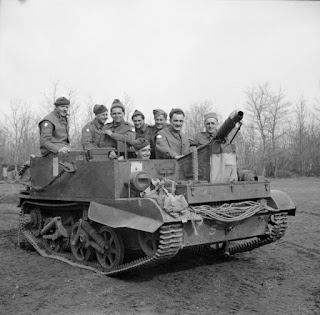 In this, the third of the Land Craft series from Pen & Sword, Robert Jackson elucidates the history in brief of this funny little runt of a vehicle. The story starts in WWI, with the fabulously Frenchified sounding British Major Giffard le Quesne Martel. I won't recapitulate what Jackson imparts very well here. But it's an interesting subject, covered in a brief but comprehensive and highly enjoyable way.

As well as black and white photos of old and current surviving examples, there are eight 3-D renderings and eight pages of colour profiles. The latter aren't the best of their type in the Land Craft/Tank Craft series, but they convey the necessary info. Within all this the book covers numerous variants. There are also the usual segments, Model Showcase and Model Products. Three of the four showcased models are 1/35, the fourth (presented first) is 1/72, my own favoured scale. 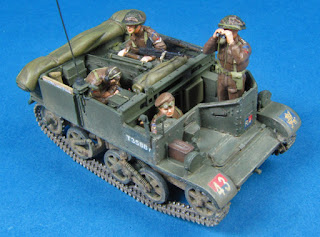 All four showcased builds are stunning examples of the modelmakers arts. I'm particularly in awe of Timothy Neate's splendid 1/72 Mk II Royal Artillery OP (observation post vehicle), a heavily modified IBG models kit. I've included an image of Neate's model above. I'll be getting/building some of these IBG kits as soon as the occasion presents itself. I may also try adapting some of the chunkier PSC kits as well.

There's quite a bit of useful info on model products in various scales as well. But the book as a whole returns to narrative text and images about the service history of these highly useful and adaptable vehicles, ending with a brief look at a selection of Contemporary Light Tracked Vehicles of the 'tankette' type, such as were based on or influenced by the UC, such as the Polish TK-3, the Russian T-37 and the Japanese Type 94. 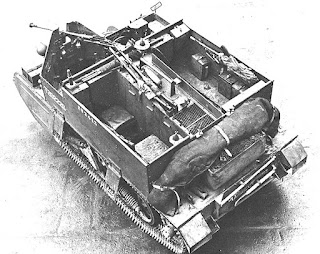 A great view into the interior spaces of a UC.

For my money this is an example of this often very useful series at its tip-top best. Reading it and perusing the images is inspiring me to build some more of these interesting little vehicles (I recently built the re-issued Airfix 1/76 kit, with 6pdr gun), whilst simultaneously inspiring and informing on the subject. Highly recommended.

* Okay, so it's not a tank and he knows it, nevertheless, the charmingly manic Lindybiege chooses the Universal Carrier as his #2 'tank' in his very entertaining 'Top 5 Tanks' video for The Tank Museum on YouTube. The whole thing is worth watching. But if you want to get to the Bren Gun Carrier segment, it's about 17 minutes in.