Near the end of this excellent book, as Andrew Uffindell summarises his analysis of Ligny, he characterises Blücher's stout Prussian defence - the old hussar's favourite defence being attack (hence his nickname, Marshal Vorwarts!) - as 'a shield. Behind this shield Wellington ... would muster his units into a spear at Quatre Bras. This spear he would then hurl into the flank of the French ... at Ligny.' He goes on 'But the 'spear' never arrived... Thus Blücher was left alone to face the brunt of Napoleon's thunderbolts.'

For me these brief extracts neatly sum up the superb combination of trenchant analysis and evocative description that characterise this very informative and highly enjoyable book.

Originally published in 1994, Uffindell's book on Napoleon's final victory - against the Prussians at Ligny, on 16th June, 1815 - has been reissued to coincide with the bicentenary of Waterloo. As Uffindell says in his preface, 'Interest in Waterloo is unlikely to fade'. Indeed, and quite naturally, as so many of us continue to remember the events of two centuries past, this area of publishing is clearly enjoying something of a boom right now. [1]

Ligny, by Ernest Crofts. Napoleon can be seen here, atop the hill at Brye, by the windmill (the lower right sail of the windmill is pointing at him!).

The Eagle's Last Triumph starts by examining the context, in a chapter titled Stormclouds of War, as Napoleon returns from his Elban exile, and the eagle does indeed fly, as Bonaparte had prophesied it would, from steeple to steeple.

Uffindell then turns to an analysis of the commanders and forces of the three main adversaries. He sets down a very interesting analysis of all the antagonists, but for me it was his exposition of the Prussian forces that was particularly intriguing, as English language histories have tended to focus first on the British contributions, and second on the French. This is now changing, with writers like Peter Hofschroer waving the flag for the Prussian (and other Germanic) contributions.

It's fascinating to read Uffindell's verdict re Blücher and Gneisenau, who he judges as individually flawed, but strong together. This complementary, effect arising from differences of character, is further paralleled in the combination of Wellington & Blücher, Wellington being more cautious and defensive, whilst Blücher was more reckless and fond of attacking. But returning to the Prussians, Uffindell essentially credits Blücher as the inspiration, and Gneisenau as the brains.

Also of interest is the fact that the Prussian army - both Prussia and her army having almost been destroyed in previous campaigns against Napoleon - was not composed like either the French or British forces, having significantly less cavalry and artillery, and a much higher proportion of raw militia. They also had little or no strategic reserves, due in part to their organisational methods, and a rather different staff organisation. Whereas the French & 'British' [2] were lead by domineering controlling egos, the Prussian command was more 'staff' based.

Blücher, as Marshal Vorwarts, by  by Emil Hünten.

Next comes the build up to the 16th June, as Napoleon famously 'humbugged' Wellington, quite literally stealing a march on his British adversary. This section is great, and, like Mercer's account of his journey towards a climactic battle (Waterloo in his case), builds the excitement terrifically.

The chapter covering the action at Ligny comprises what is perhaps a surprisingly small part of the whole, at only 29 pages (pp 91-120) of a book that's only a little over 250 pages long. That means that just over 10% of the book is given over to the lynchpin narrative of the action itself. But this isn't a complaint, as it's all done so terrifically well, Uffindell situating Ligny in its context - for example by reference to Chandler's concept of the Napoleonic battle category of 'twin battles' - with the Waterloo campaign providing a twin set of twin battles (Ligny and Quatre Bras on the 16th, and Waterloo and Wavre on the 18th)!

Blücher comes a cropper at Ligny.

The description of the action itself is both information rich, and also very evocative: 'The very earth trembled with the terrific concussion of the awesome barrage. Guns spat fire and death.' Uffindell also displays a very nice slightly antiquated turn of phrase, using such terms as 'smote', for example: 'Frightful was the carnage that then ensued.' I love that!

It was frequently observed in contemporary accounts that the fighting at Ligny (and two days later at Plancenoit) was particularly savage, a bitter rivalry having grown up between the French and Prussians. Such sanguinary settings make for exciting reading. Here's just one terrifically horrible excerpt:

'Lieutenant Barral of the French grenadiers charged through Ligny, along a street paved with corpses. His feet did not touch the ground itself once. Behind him followed a French battery which trampled and galloped over the crushed bodies. The merciless passage of heavy hooves and wheels caused corpses seemingly to spring to life again by a freak of elasticity. Lieutenant Barral found it horrible to contemplate.'

A print depicting Ligny, attributed simply to 'the german School'!

Having described the battle itself very well, Uffindell turns his attention to Quatre Bras, devoting about as much space to that battle as he did to Ligny. This is very useful, as the two battles, with their inter-related balancing of forces and goals - the French dealing with two enemies they wanted to separate, whilst the Allies attempted to unite - meant the to actions were intimately connected. In this context, what Uffindel calls 'The Fatal Peregrinations Of D'Erlon', that being the title of the chapter that deals with this episode, is fascinating.

The book then goes on to relate in brief what happened on the 17th and 18th, and even what became of the protagonists after Waterloo brought this long period of warfare to its close. Numerous anecdotes derived from both contemporary and secondary sources keep the developing story highly interesting. Four example, in the move northwards towards Waterloo, Napoleon chastises a unit that retired from the field, and praises another that fought well. When Bonaparte singles out Colonel Fantin des Odoards' unit for praise, Uffindell observes: 'French soldiers would eagerly exchange an arm or a leg for such a brief, factual sentence of praise from that remarkable leader of men, Napoleon.'

Describing Waterloo itself, Uffindell's colourful language reaches a kind of apotheosis: 'Wellington's army writhed like an immense, wounded serpent. Still it bellowed defiance but blood spurted forth from innumerable wounds.' In relation to the 'near run thing' idea, this extract (referring to the split between the troops Wellington commanded who fought resolutely and the elements that broke, or the huge numbers of deserters), is worthy of note: 'In fact, Wellington's army had split into two... Never in the history of warfare has such a victorious army presented such an image of defeat.' 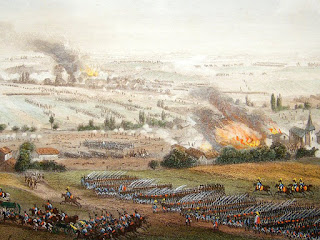 The full image of Theodore Yung's Ligny artwork, as used on the book cover.

Having told the story, and done so very well, Uffindell turns to the analysis, and in this way revisits much of the action, extending the breadth and depth of his already excellent treatment. Doing so inevitably results in Uffindell addressing some of the contentious issues that surround this campaign.

And so it is that, like so many other books coming out on Waterloo at present, whether totally new or just re-issued, this one addresses some of the controversies that this epic and epochal battle has left to posterity. However, unlike some of these other books, The Eagles Last Triumph doesn't seek to justify its existence primarily on this basis, nor does it get bogged down, despite a very high level of detail, in either the examination of such issues, or the potentially partisan arguments that can rage over them (even all these years later!).

Whilst Uffindell doesn't say too much about Grouchy, he does spend a lot of time dealing with D'Erlon's wanderings. I found this fascinating, and hope one day to perhaps trace the route Uffindell suggests, in the tracks of I Corps. Although he doesn't have much to say, positive or negative, about Grouchy, he does come to the defence of the 'bravest of the brave': 'Ney cannot be blamed for failing to seize the crossroads.' Uffindell may of course be right, but that never stopped people, Napoleon himself being the chief example, from doing so!

D'Erlon, from the French Wikipedia entry on him.

As if all this wasn't enough, Uffindell then devotes a sizeable chunk at the end of the book to information useful to those who might be thinking of visiting the battlefield today. Having been to the area twice in the last two years, I love this sort of stuff. It certainly whets my appetite for another visit! On p. 220 he expresses the challenges weather presents in an appropriately martial but still poetic manner: 'Generals Mist and Rain, the old enemies of the battlefield visitor, are redoubtable adversaries.'

Uffindell also sheds light on something that struck me when I photographed crops at Waterloo earlier this year (there's a pic on my Waterloo post here, if you're interested). The corn growing near Hougoumont was only a few feet tall - two probably, perhaps three at the most. 'The crops today' he tells us 'are much shorter than they were two centuries ago. In 1815, after the battle, observers could follow the march of various battalions in all directions by the swathes of trodden down corn. Sergeant James Anton of the 42nd Highlanders commented that the crops were as high as his bonnet... Before charging British infantry squares, the French cavalry often had to send forward an intrepid horsemen to plant a lance before a square to indicate its position amidst the rye. The French would then charge towards the lance pennon.'

Another thing that strikes the contemporary visitor to Napoleonic battlefields is the contrast between what brought one there, and what one now sees. In relation to this, I found it quite moving when Uffindell cited an anecdote from the memoirs of Louis Canler (of D'Erlon's Corps), regarding a French soldier his column passes, sprawled by the roadside with both legs blown off. Despite his suffering, this earnest young warrior still cried out 'Long live the Emperor! I have lost both my legs but I couldn't give a damn! Victory is ours! Long live the Emperor!'

Uffindell reflects, rather sombrely, 'Today, the cars from Charleroi to Brussels rush unheedingly past the spot where the Frenchman bled to death.'

Another handsome map from Alison.

Having read this, and thoroughly enjoyed it, I think it's time to read On The Fields Of Glory, another Uffindell book I have on the shelves. [3] However, as to The Eagles Last Triumph, I for one would certainly recommend it as an excellent Napoleonic read.

Whilst looking for pictures to illustrate this post I found this page, which has lots of interesting images, including many contemporary pictures of locations and monuments on the modern day battlefield.

[1] - He also says his book has been updated. I can't comment on any changes, as I have neither got nor read the previous edition.

[2] - British is in inverted commas because the forces under Wellginton were of course predominantly continental, being composed of Dutch, Belgian and numerous Germanic contingents.

[3] - Actually I'd intended to take that on our recent Waterloo trip, as it's a book all about visiting the battlefields of the Waterloo campaign. I opted instead to take Ardennes, 1944, by Antony Beevor ('cause I was two thirds through it already!), and the abridged version of Captain Mercer's Waterloo Journal (because it was much shorter!).
Posted by Seb Palmer at 22:51