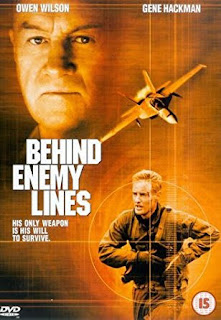 Oh dear!? Clearly plenty of money was spent making this film. Jets and aircraft carriers, and bombed out former Soviet-bloc settings such as we see here, don't come cheap. But despite the multi-million dollar budget, it is - in my personal opinion - really naff.

The plot is potentially good: US pilots on routine peace-keeping mission patrol are shot down in hostile territory. How will they survive? Will they be rescued? One feels that the context - the horrifying conflict in Serbia/Bosnia - is not treated with enough sympathy or understanding. It's just used as a backdrop for a 'goodies versus baddies' scenario, utterly lacking in sophistication. 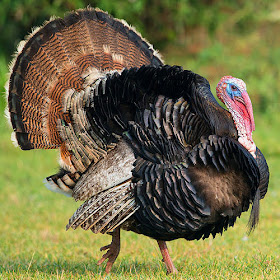 
Talking of which, one of the early warnings that this isn't going to be much cop is the use of godawful music throughout. The sort of strident blues-rock garbage better suited to steroid enhanced gym workouts than any kind of film, i.e. the sort of thing you'd expect to hear in a Steven Seagal DTV movie. 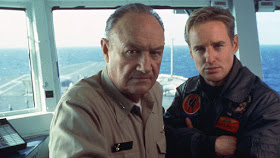 
Owen Wilson and Gene Hackman should've shown themselves more discerning. They're both good actors. But they can't rescue this turkey. Some of the filming is pretty slick. But when the heart of the film beats so erratically and weakly, such trickery smacks of dumb desperation. Character and dialogue are lacking, and plot credibility is more full of holes than a string vest. 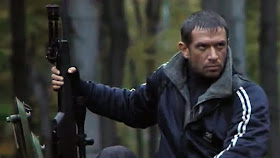 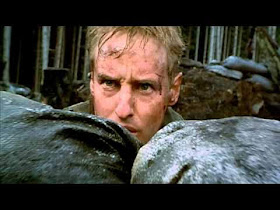 Panned by the critics, and rightly so in my view, this movie was nevertheless a box office hit, spawning three direct-to-video sequels. To be fair to Wilson, he does actually carry off the action hero part admirably enough. It's not his acting, however, that's the issue/problem.

I did manage to watch Behind Enemy Lines all the way through. But I felt robbed, frankly. The final scene is a damply predictable squib, not the chest-beatingly manly and proud firework display the soundtrack lamely tries to suggest. Watchable, just. But I wouldn't recommend it.